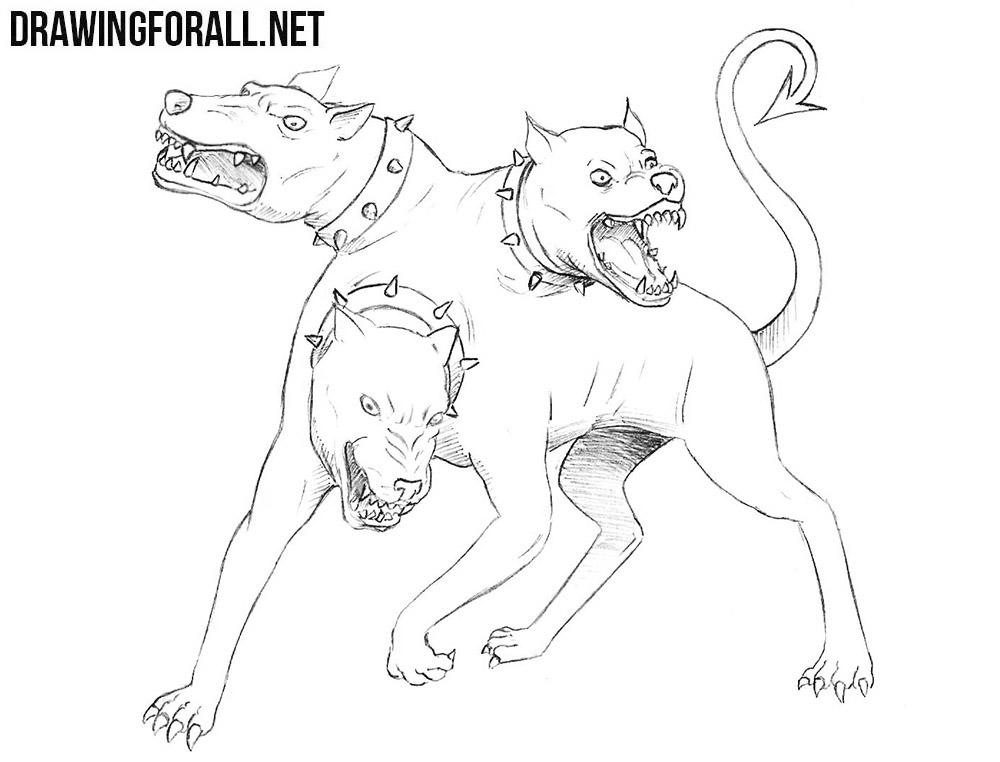 Who is the most famous dog monster of myths and legends. We believe it is the Cerberus, first appeared in the ancient Greek myths. Originally, it is the creation of Typhon and Echidna (Tartarus and Gaia), a three-headed dog, whose poisonous mixture flows from the mouths. Cerberus guarded the way out of the kingdom of the dead Hades, not allowing the dead to return to the world of the living. Later this eerie creature was defeated by Hercules in one of his exploits.

The lesson on how to draw Cerberus begins with sketching his skeleton. We need to draw a usual dog skeleton, but with three heads. So sketch out three heads, thorax and pelvis using simple ovals. Next, sketch the neck, the spine, tail and legs with simple lines. 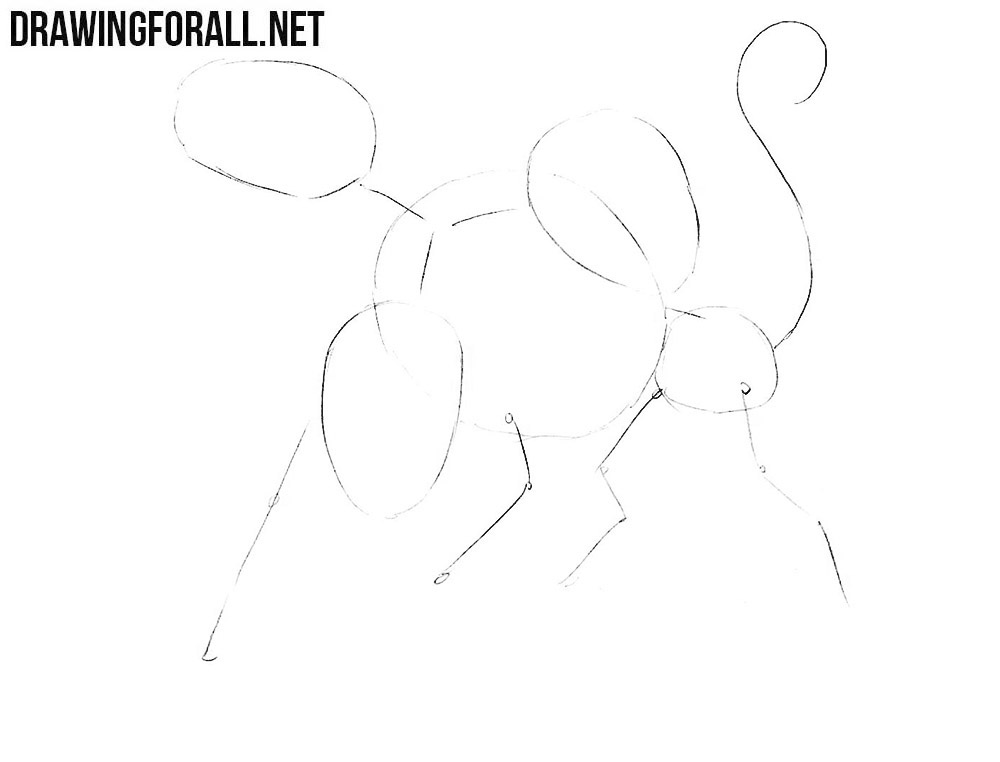 Now, with the help of light lines sketch out the eyes and mouths of Cerberus. Next sketch out three necks in the form of cylinders. Then connect the chest and pelvis, creating the torso of our terrible dog monster. Thicken the paws and tail and move on to the third step of the lesson about how to draw Cerberus. 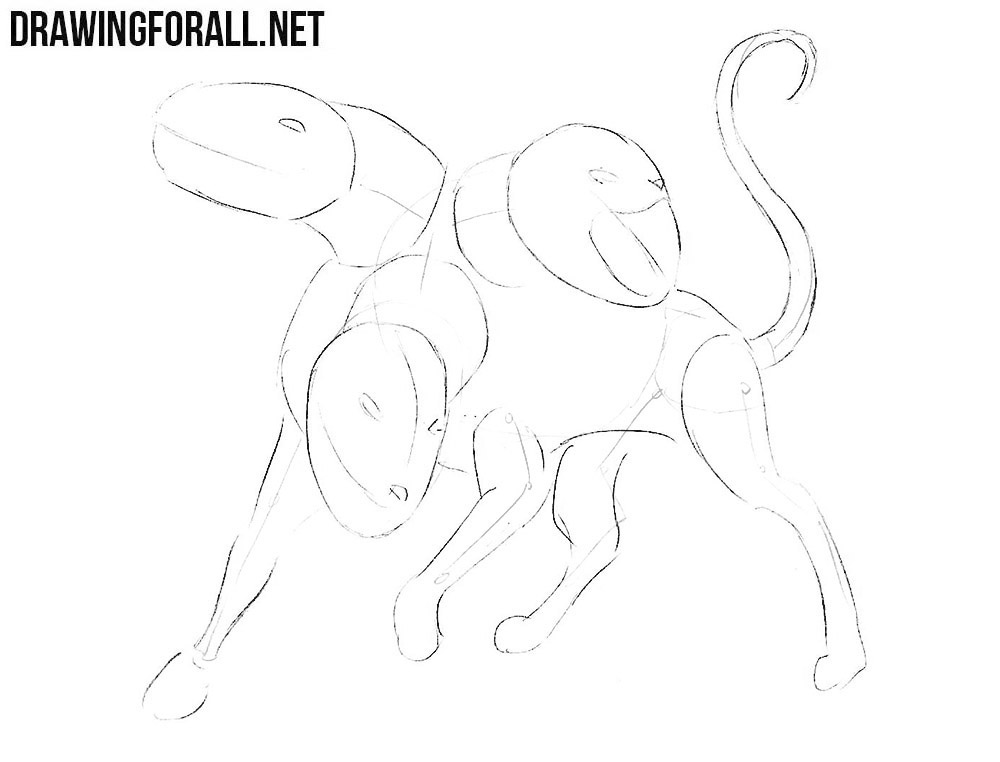 Now let’s start adding details to Cerberus. We need to try hard and draw details on all three heads of an ominous dog. Draw the eyes, noses, open mouths, outlines of the heads and go to the next step of the drawing tutorial on how to draw Cerberus. 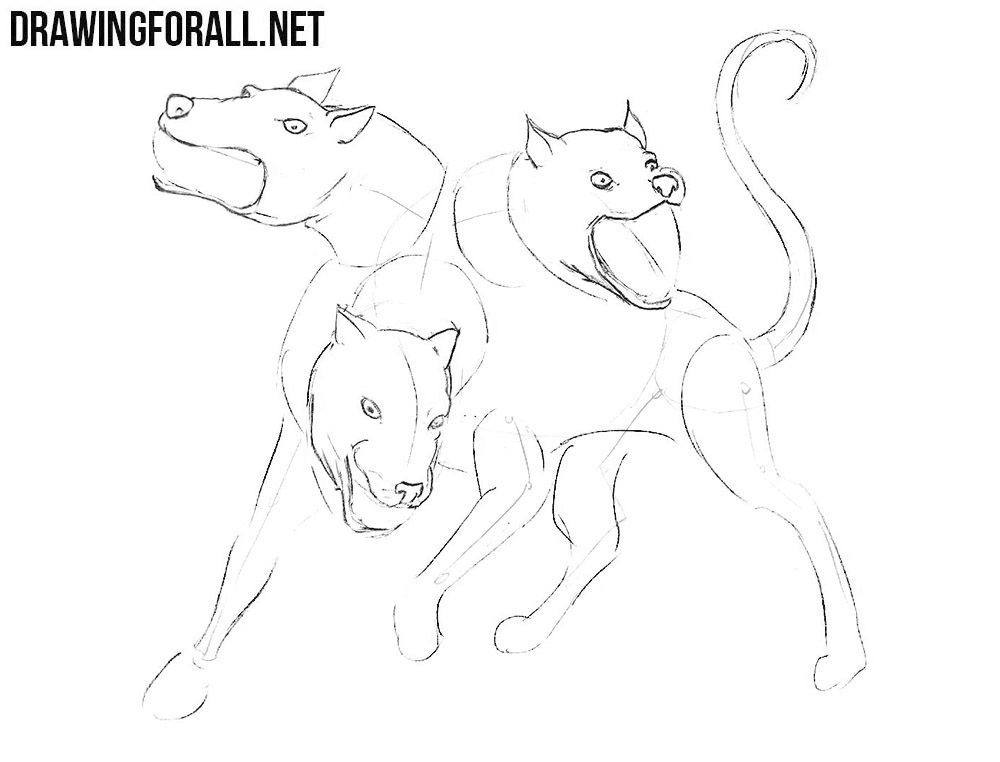 We continue to work on the details on the heads of Cerberus. Removing all unnecessary guidelines from the heads, we need to draw out sharp teeth with gums. Do not forget to draw wrinkles on the heads as shown in our example. 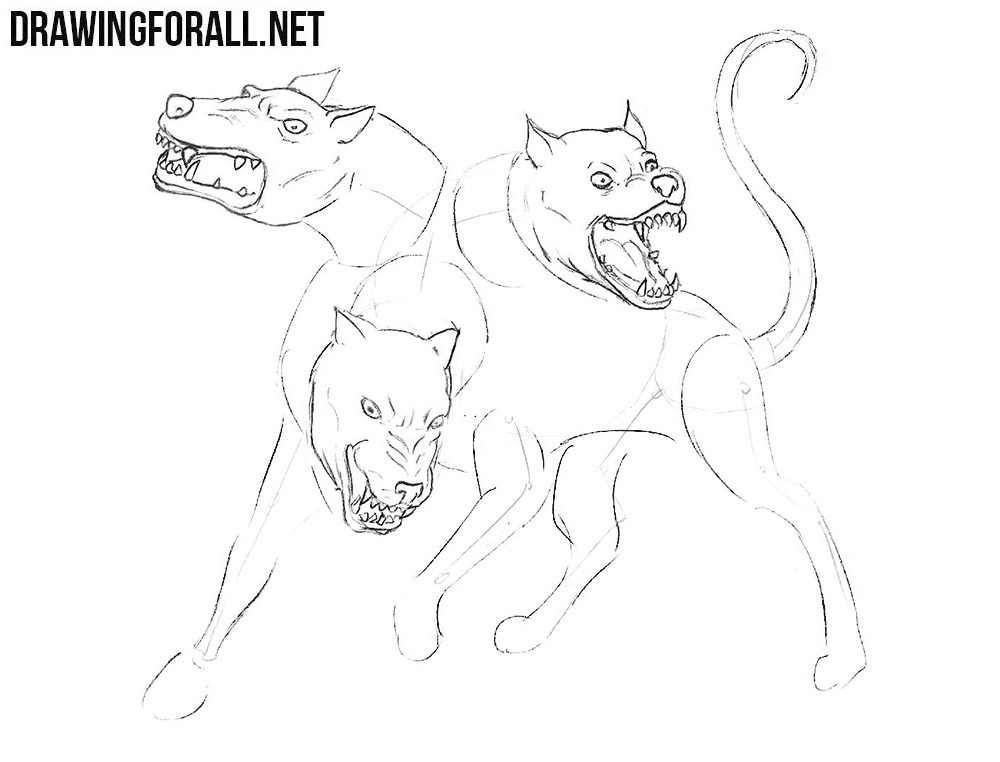 Move to the neck, drawing them with clear and dark lines. On the neck we draw collars with sharp spines. Next connect all three necks on the torso, as shown in the example drawn by our artists. 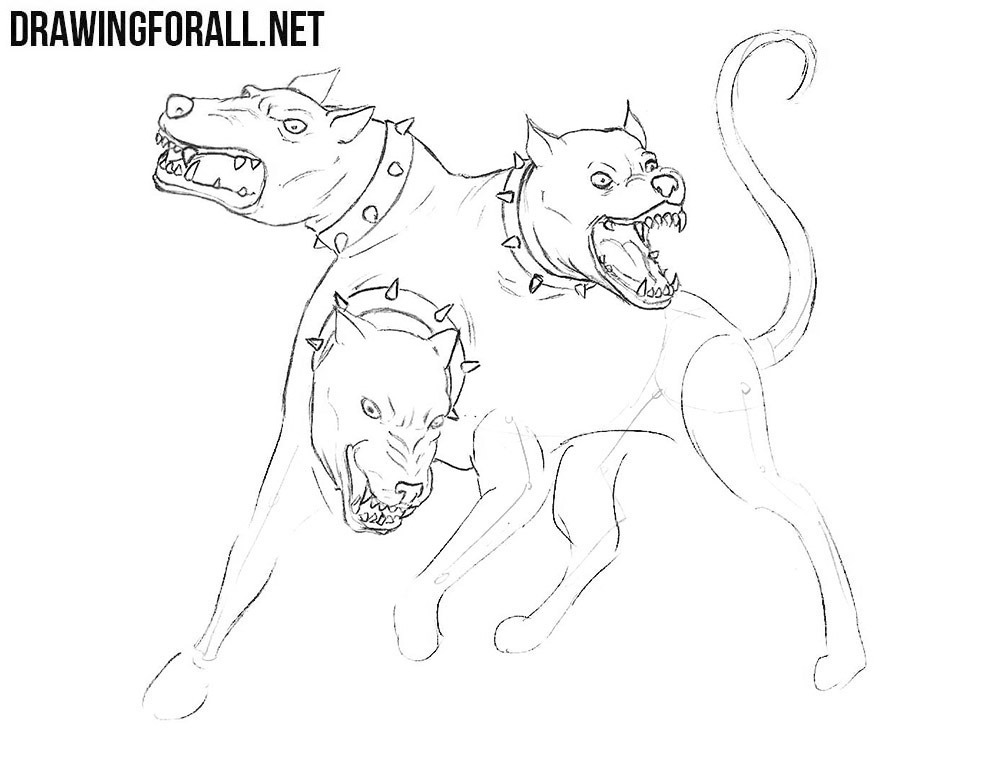 In this step we draw the outlines of the front paws with clear and dark lines. Note that the legs should be quite muscular. 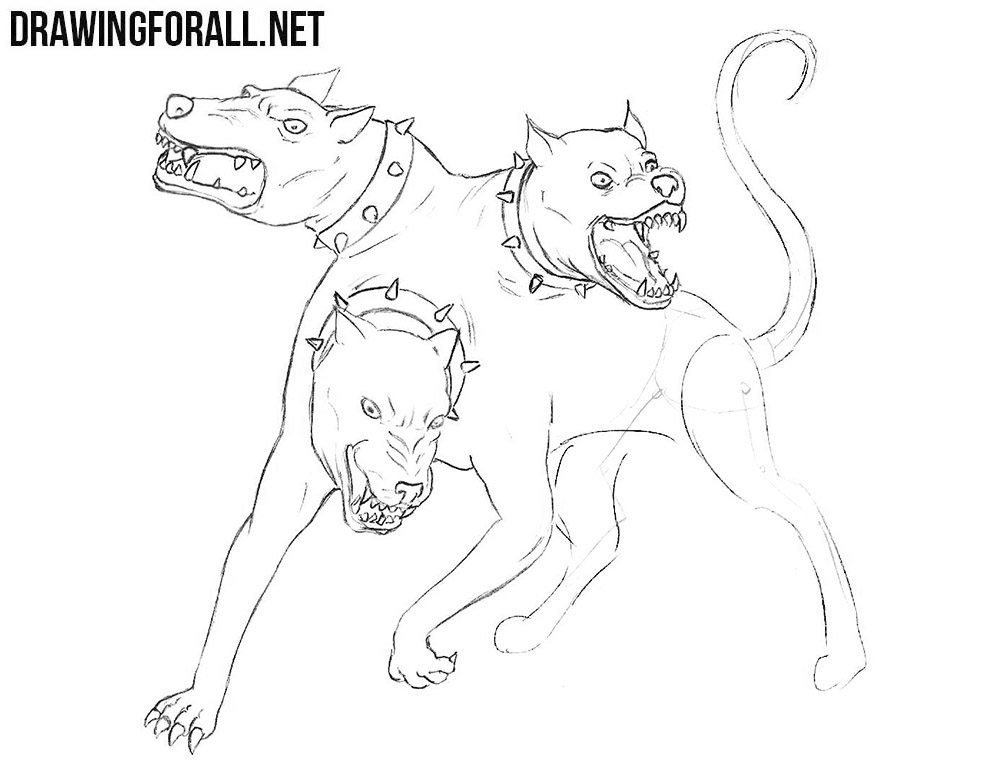 Let’s now do the same operation, but with the back of our sinister dog. That is, using clear and dark lines, we draw out the torso, legs and tail with a sharp tip. Gently erase remaining unnecessary guidelines from the Cerberus drawing. 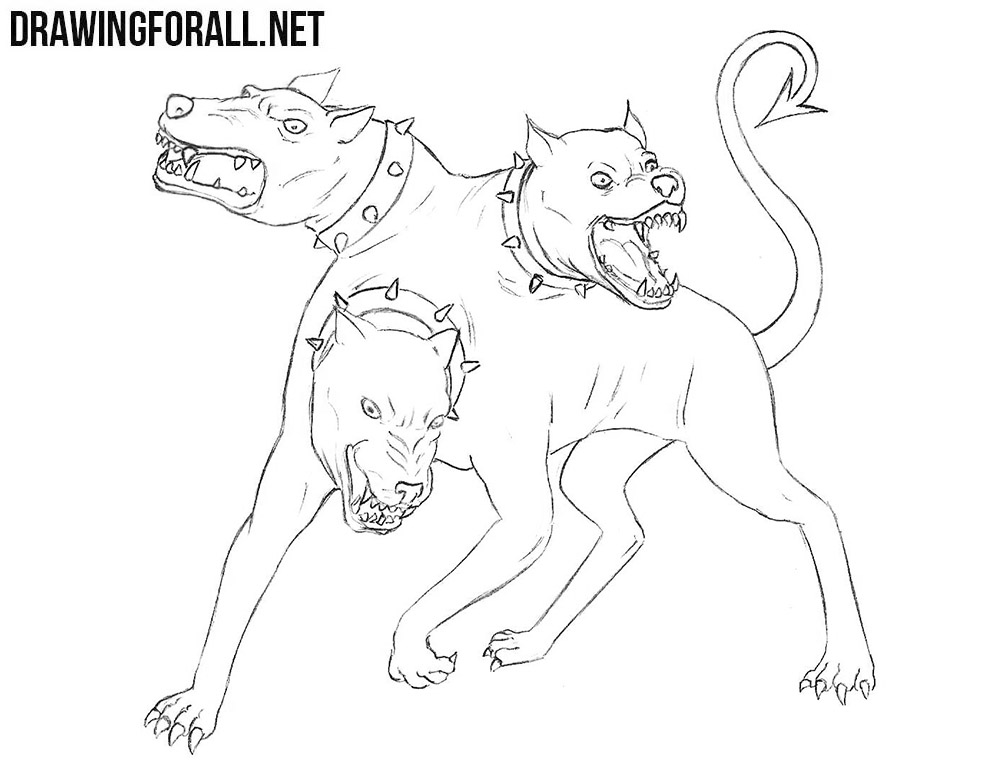 If you did everything exactly as in our example, and your drawing is similar to ours, then it’s time to work with shadows. Using dense and smooth hatching, draw shadows taking into account the angle of incidence of light, as shown in our example.

Do not forget to offer us topics for new drawing lessons. Write it in the comments here or in our social networks, and our artists will create this drawing lesson in the shortest possible time.