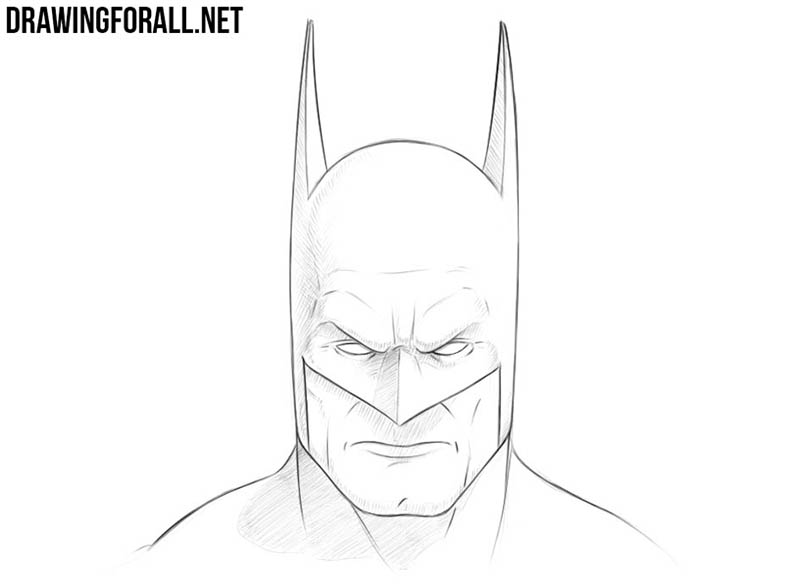 The team of the Drawingforall.net really loves Batman, and so in this guide we decided to show you how to draw Batman’s head step by step. In fact, it is not at all difficult to learn how to draw Batman face, and in this seven step instruction, we will describe this process in the most detailed and simple way. In the long history of comics about the Dark Knight there were a lot of different looks, because each artist sees the character in his own way, and in the lesson you will read below we will draw the mask of Batman in classic appearance.

So, let’s start drawing Batman’s face from the most classic oval. Such a geometric figure is drawn in order to create a base for the future drawing and not to get confused in the proportions of the head drawing. In the first step, you can outline the jaw and neck, as did the artists of Drawingforall.net. 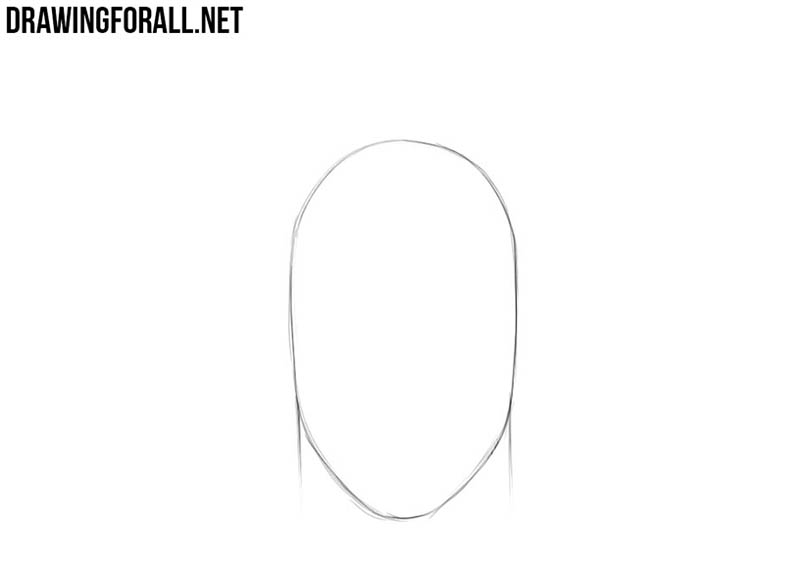 Now we need to map out two lines, with the help of which we will later draw the details of Batman’s face. These two lines should intersect exactly in the center of the face, in the area of the nasal bridge. On the horizontal line, mark two short lines that indicate the location of the eyes. On the vertical line, mark the nose and the mouth with two similar short lines. 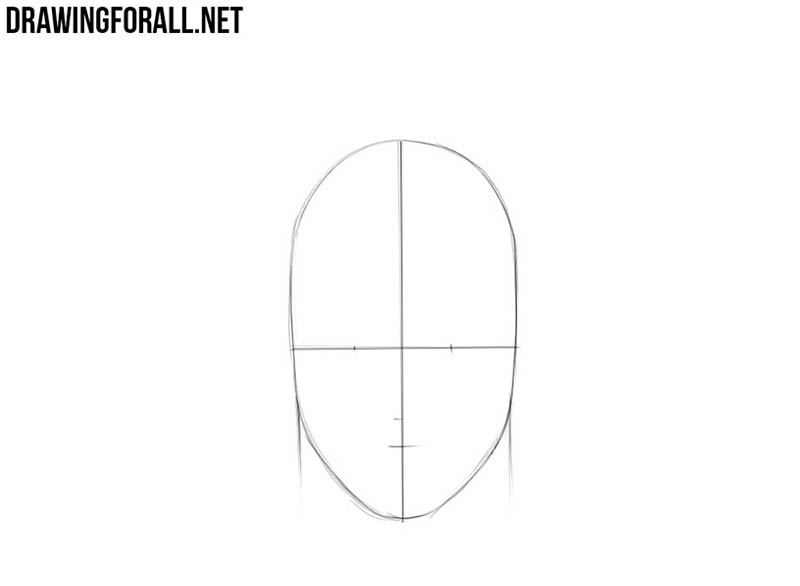 Let’s start adding the most noticeable details details to the Batman head drawing. In this case, we will be helped by the very lines that we outlined in the step two. First, mark out eyes with frowning eyebrows. Next, sketch the opening of the mask and mouth. 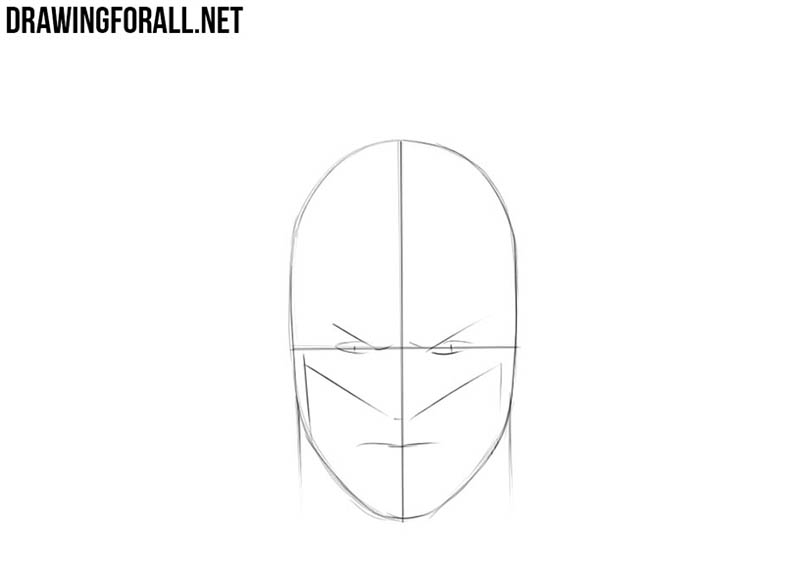 Continue to add details to the Batman head drawing. Carefully form a large and powerful jaw. Outline the lower lip and the lines of wrinkles (this is of course the detail of the mask, which is designed as wrinkles). Draw long and sharp horns and shoulders. Horns by the way can be smaller if you draw Batman in the style of Dick Sprang or Frank Miller. 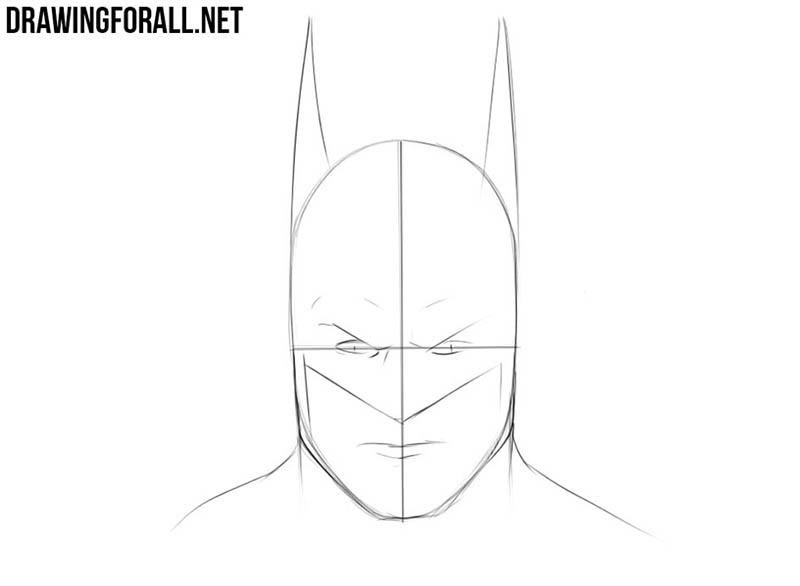 We will now begin drawing the final details of the Batman’s face drawing. Let’s start with the eyes, forming their outlines, drawing the frowning eyebrows and wrinkles around the eyes and on the forehead. Be sure to mark the two lines of wrinkles between the eyebrows, which create a formidable and serious look. 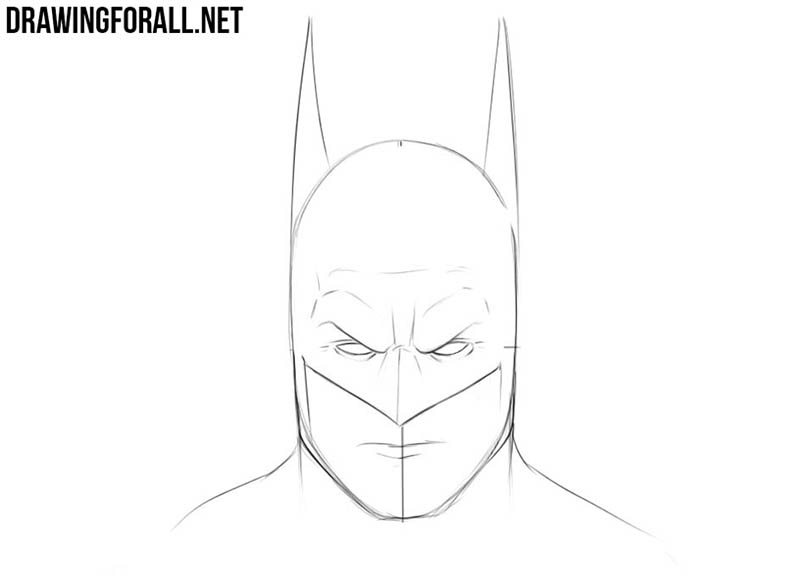 Now with the help of very clear and dark lines we trace the outlines of a powerful jaw, the head and horns of Batman. Next, draw the outlines of the neck and the muscles of the neck. We finish the sixth step by removing all unnecessary guidelines from the Batman head drawing. 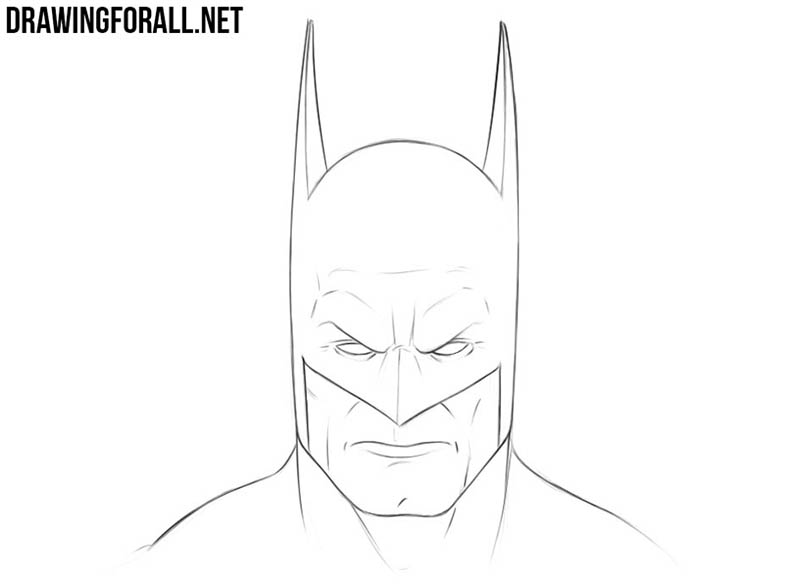 At the very end of the guide on how to draw Batman’s head, we will add shadows in order to achieve greater realism. To begin with, according to tradition, we define the source of light. In our example, it falls from the top right. Given this we add shadows with the help of hatching. Correctly applied shadows should emphasize all the details in the drawing.

We hope that the instruction on how to draw Batman’s face did not seem too difficult for you. But if you encounter any difficulties in the process of drawing the Batman’s mask, be sure to write us about it in the comments to this article.