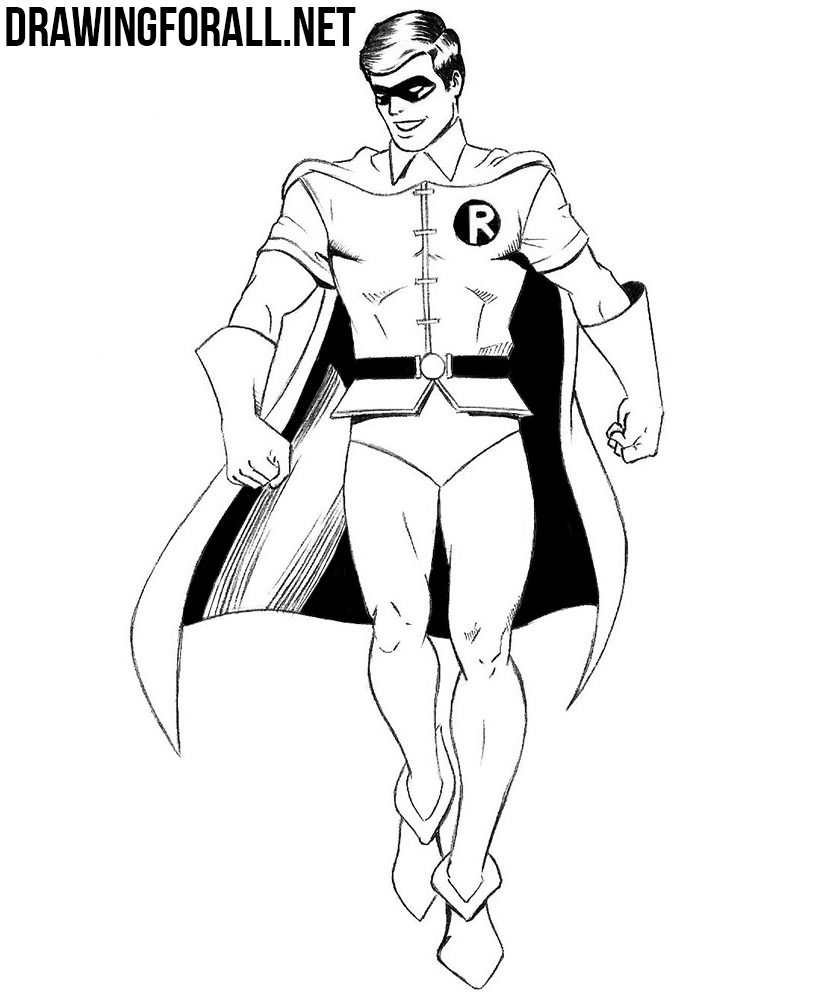 Kind time of day dear artists. Today we present to you a drawing lesson in which we will show you how to draw Robin. In fact it is an alias of several fictional comic book characters about Batman.

These characters, as a rule, are partners of Batman, but sometimes act as separate heroes.

In our example Robin stands straight, so it will be pretty easy to draw his figure. So take a pencil and with the help of light lines sketch out the head in the form of an inverted egg (or an oval). Next, draw a line of the spine on which the chest and pelvis are located. At the end of the step we sketch out the arms and legs. 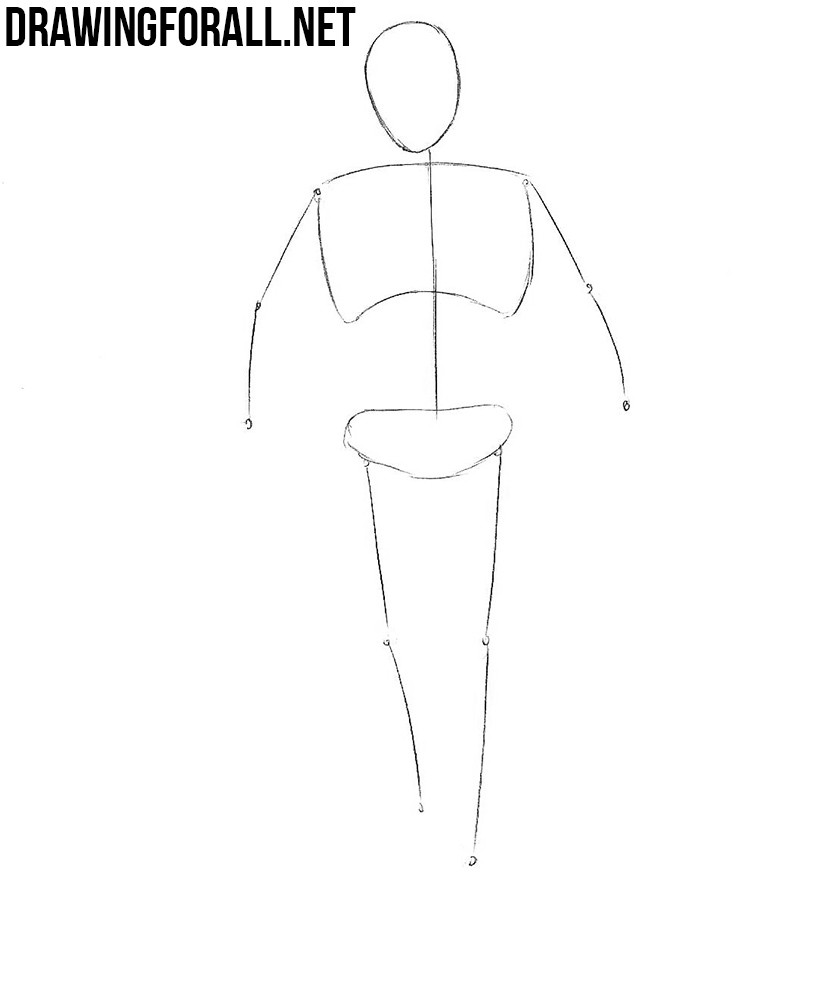 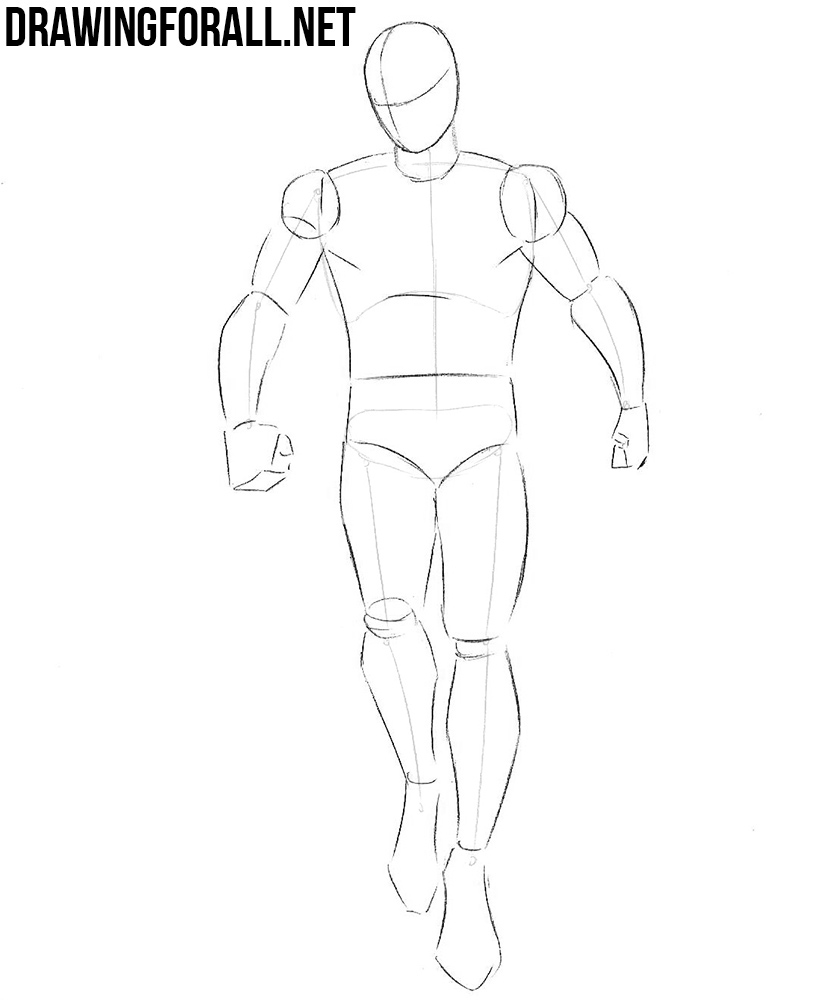 We continue the drawing lesson about how to draw Robin. Here we need to outline some elements of clothing. First of all we design a collar that goes into a cape that goes behind the back hanging down to the knee area. Next sketch out the outlines of the gloves and shoes. 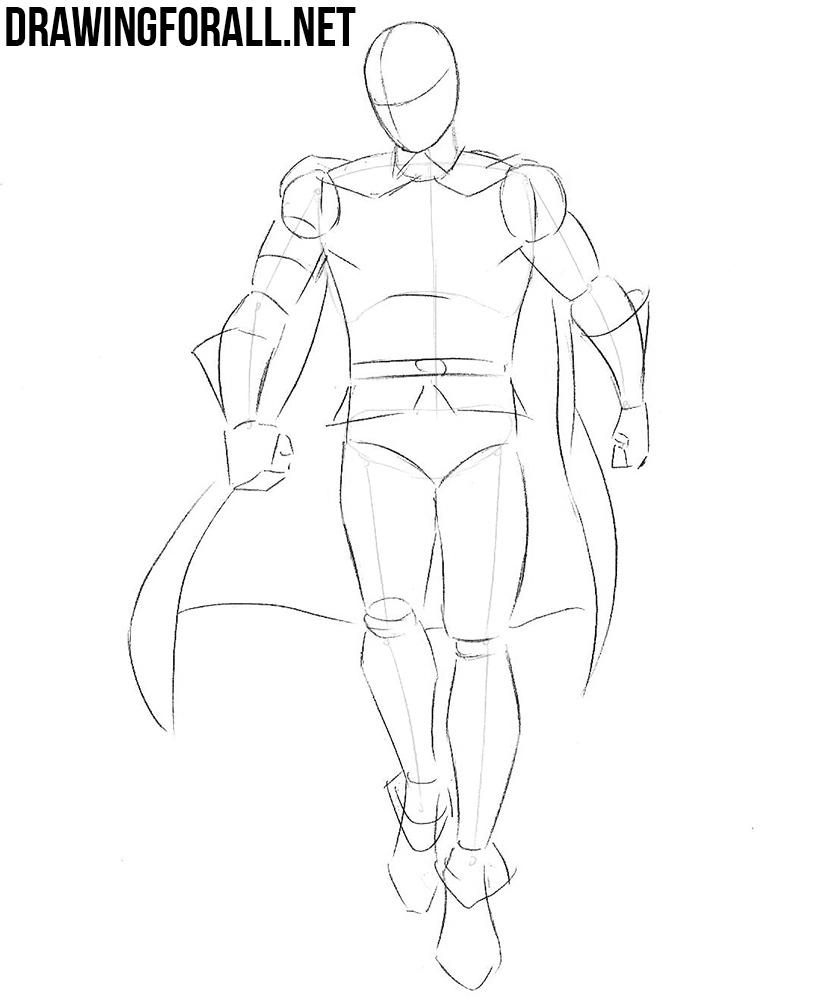 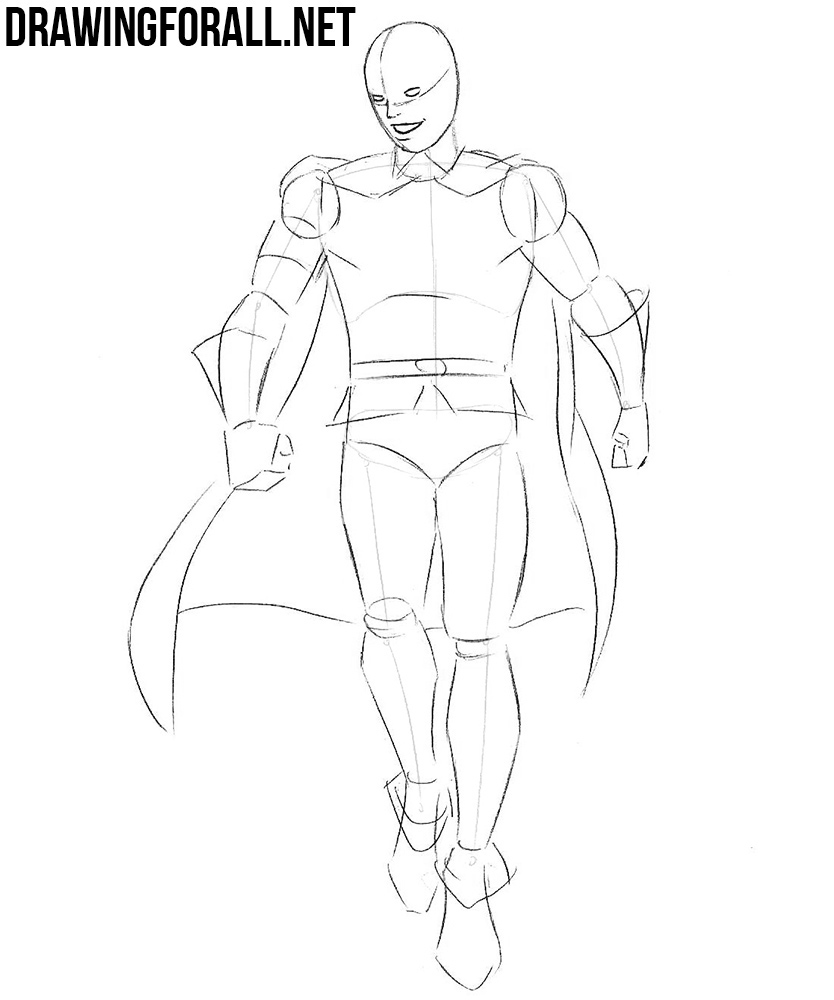 In this step we finish drawing the head of Robin. At the top of the head draw the hair using curved lines. Draw the ear, the line of the jaw and face as a whole. Around the eyes draw out a famous mask of Robin (which is somewhat like a raccoon mask). 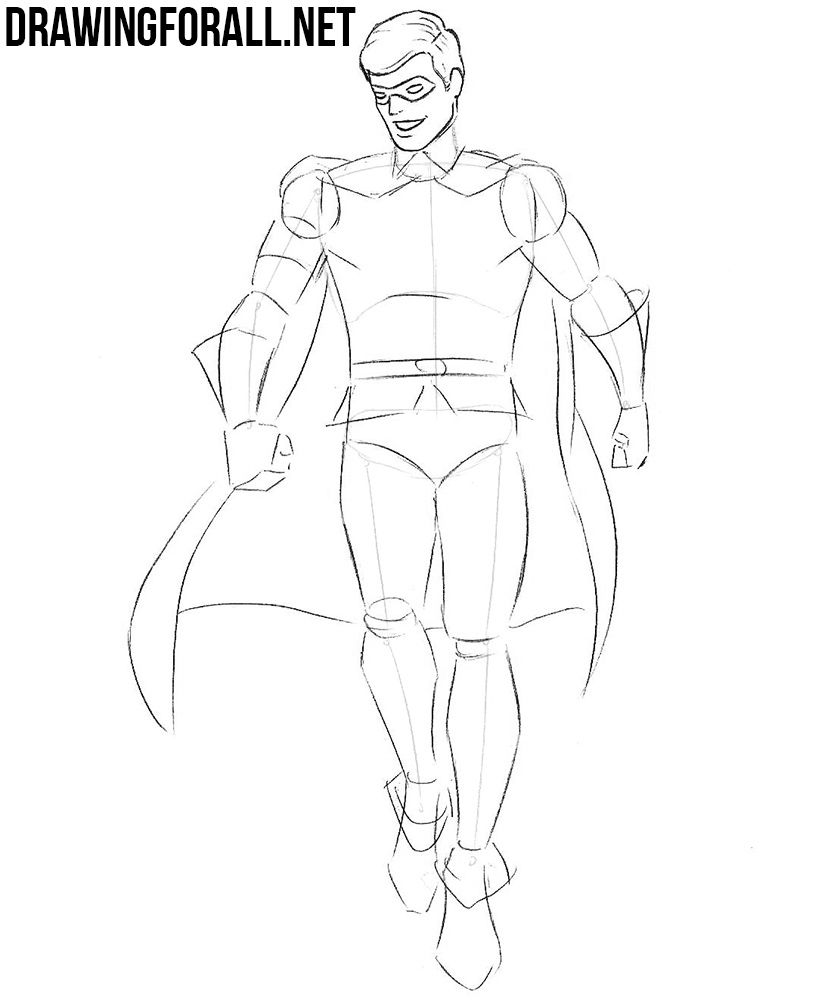 Gently draw the collar. On the shoulders draw out the outlines of the cape. Next we draw the shape of the torso. Recall that the torso should narrow closer to the waist (in more athletic people this narrowing is more noticeable). With light lines draw the outlines of pectoral muscles and abdominals under the costume. Outline the belt and logo on the left side of Robin’s chest. 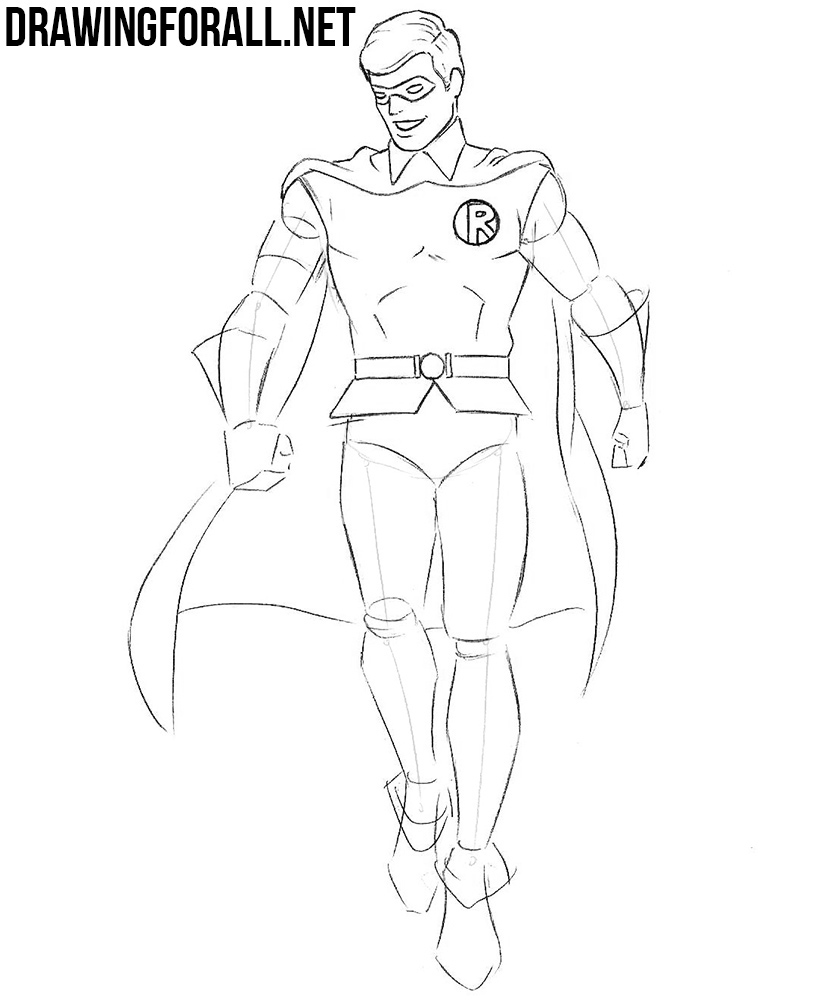 Let’s move to the arms of our Robin. First we need to draw the outlines of short sleeves and add some folds in the area of the armpits. Next, draw out the outlines of muscles and wide gloves. The most difficult moment is to draw fists (to learn more about this, visit the lesson on how to draw hands). 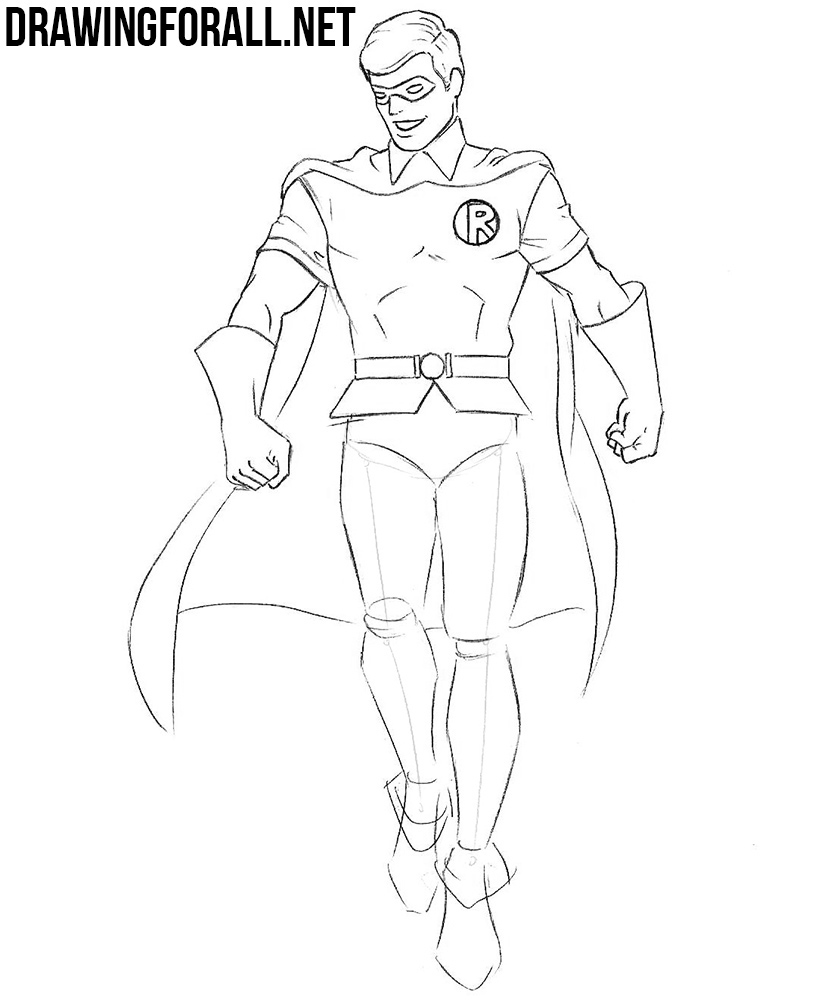 This step is somewhat similar to the previous step. Erasing all the extra lines and the extra strokes from the first two steps, draw out the outline of Robin’s legs. Draw the outlines of the muscles and knees as shown in our example. At the end of this step we need to draw shoes. 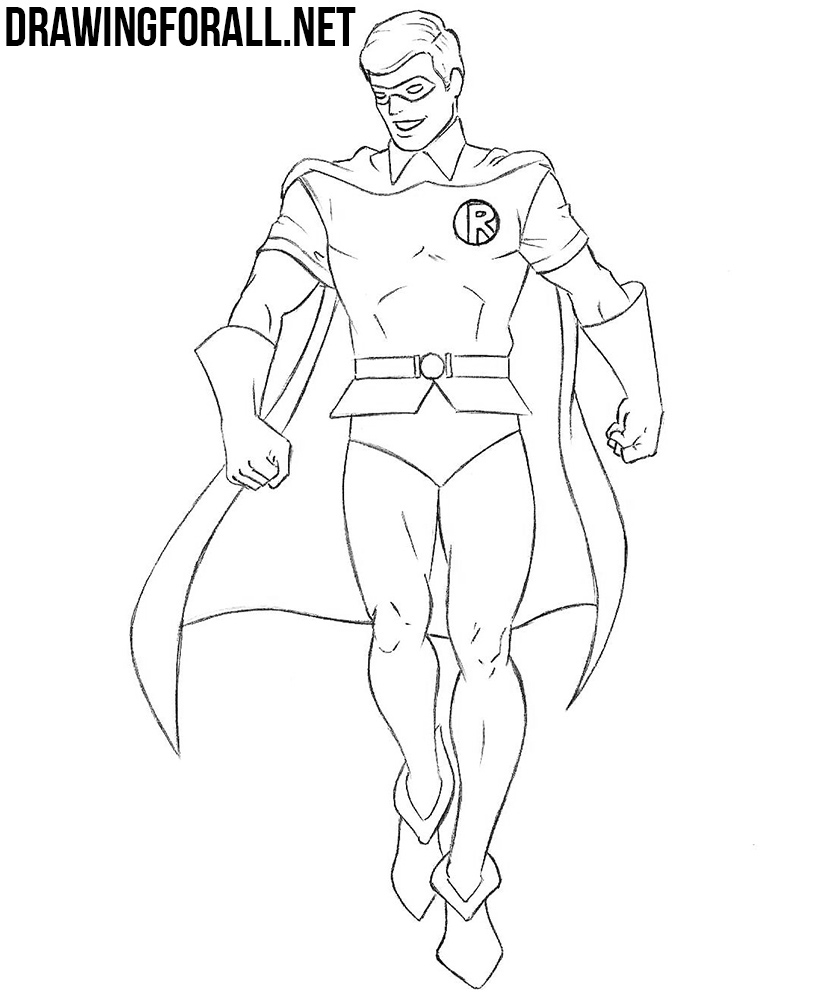 And in the last step of the lesson about how to draw Robin we add shadows. And as always we do it in the style of comics. What does it mean? In comics are always used dark and contrast shadows. In order to draw such shadows, you first need to draw out the outlines of the shadow and then paint over them in black. In order to make lighter shadows you need to use hatching and cross-hatching.