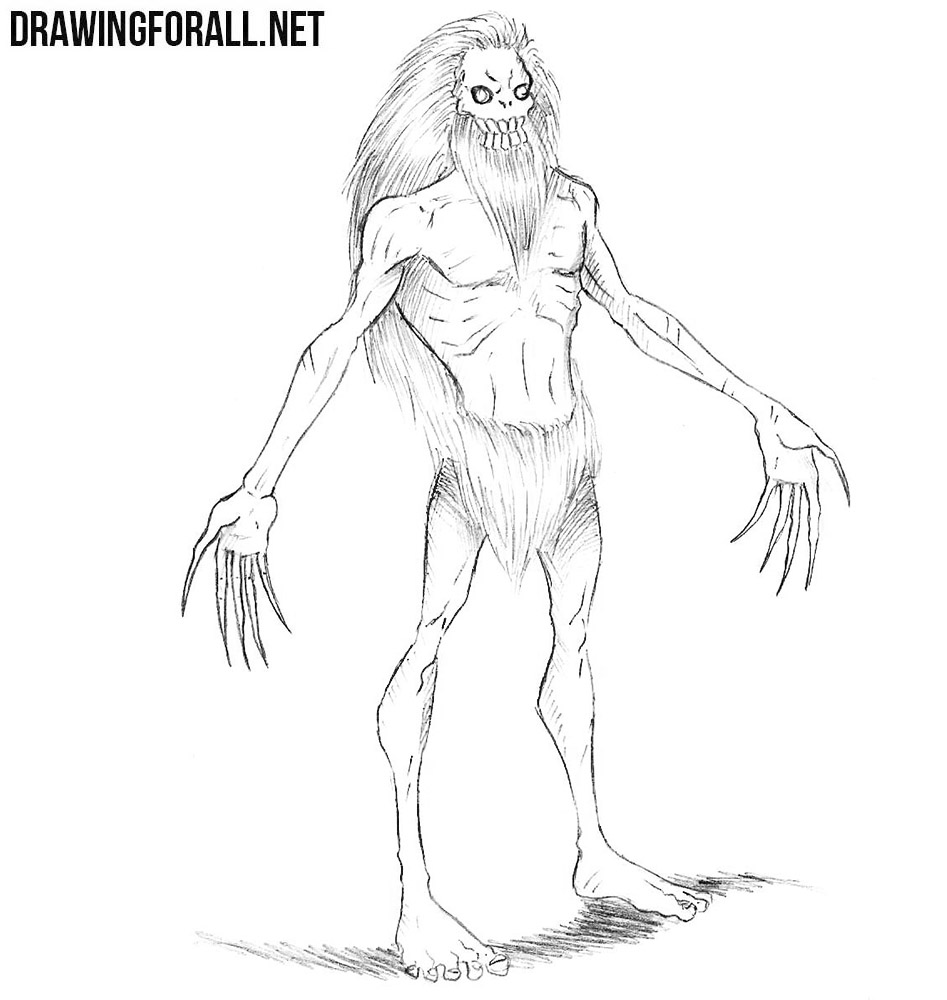 Wendigo is a cannibalistic spirit in the mythology of the peoples of North America. Initially perceived as a symbol of insatiable hunger and a hungry winter, later began to serve as a warning against any excesses of human behavior. So, let’s start the lesson about how to draw a wendigo.

Despite the fact that wendigo is not a human, the principles of drawing his body are quite human. Draw an oval head and a line of the spine, on which we draw a thorax and a pelvis. With the help of simple lines sketch out the arms and legs. 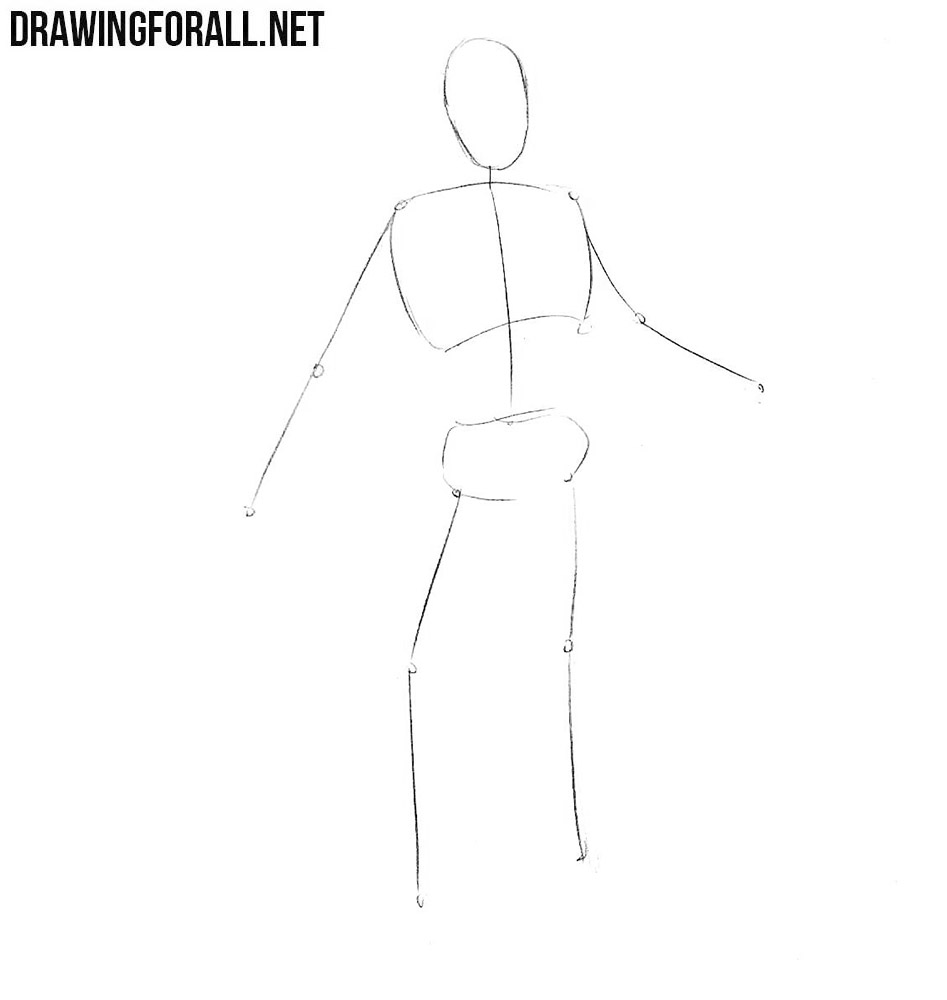 Sketch two lines on the head – they will help us draw the details of the face. Next, outline the torso, tapering at the waist. Draw thin arms and feet. At the end of the step, we draw hands with thin long fingers and large enough feet. 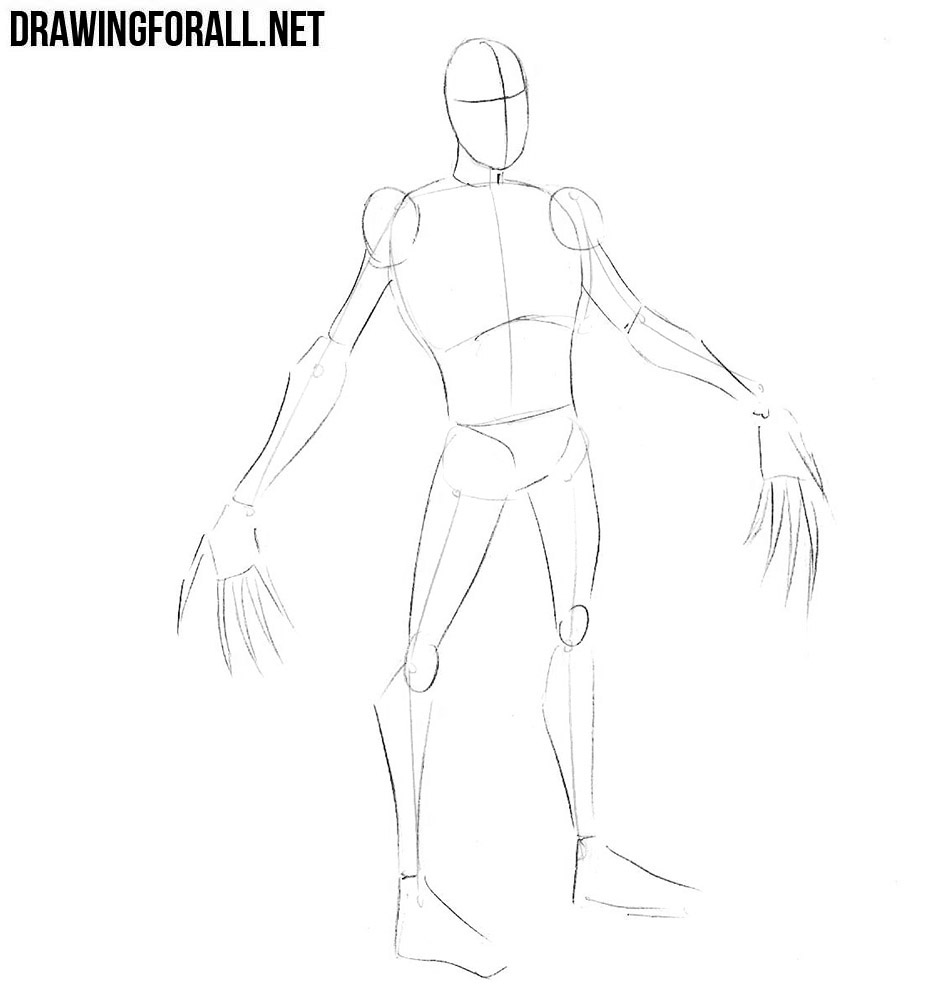 Starting with this step, we will draw the final details. Carefully draw terrible eyes, nostrils and huge teeth. Next draw out the outlines of bones of the face. 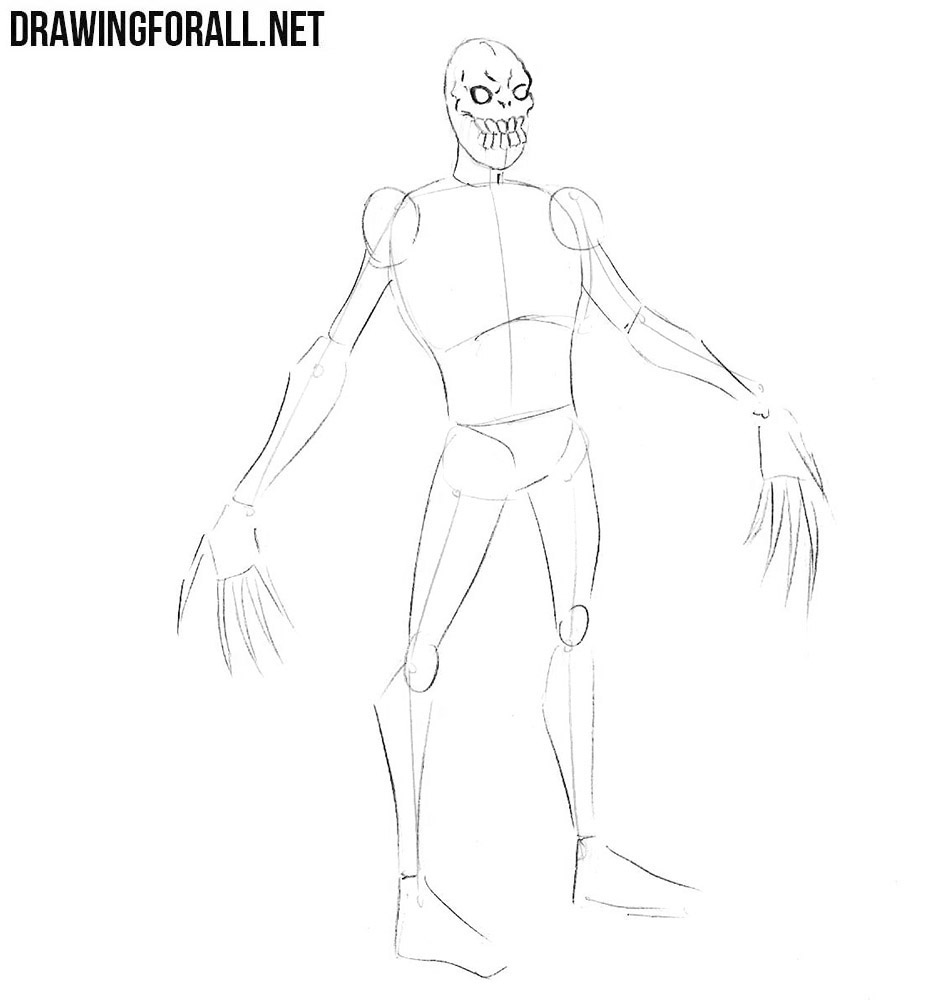 Now let’s deal with the numerous hairs on the head of the wendigo. With the help of long and smooth lines, we draw a long beard and entangled hair. Do not forget to erase all unnecessary lines from the head. 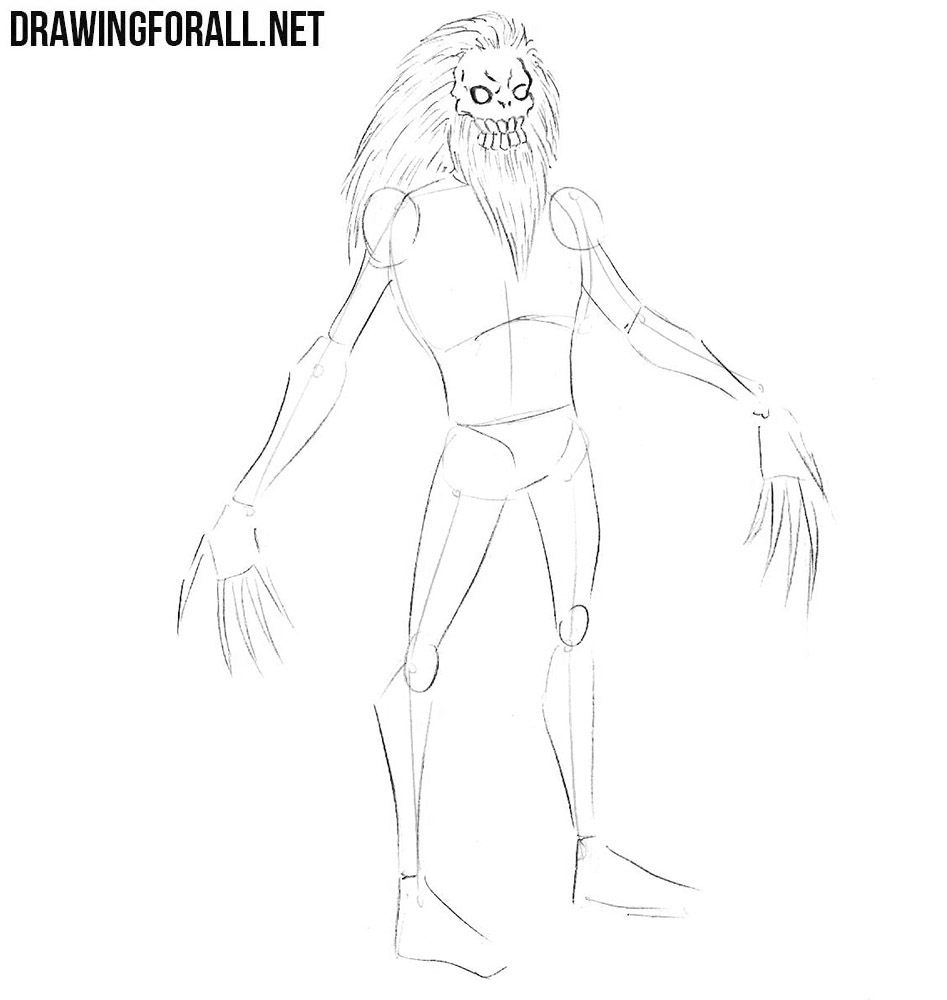 Carefully draw out the shape of the torso and all the ribsof wendigo. Do not forget to draw lines on the belly and remove all unnecessary lines from the torso. Also draw hair in the region of the pelvis of the monster.

Now it’s time to get work with the arms of the wendigo. Draw out the outlines of thin and wiry arms. At the end of the step, we draw out the hands with very long, sharp and creepy fingers of wendigo. 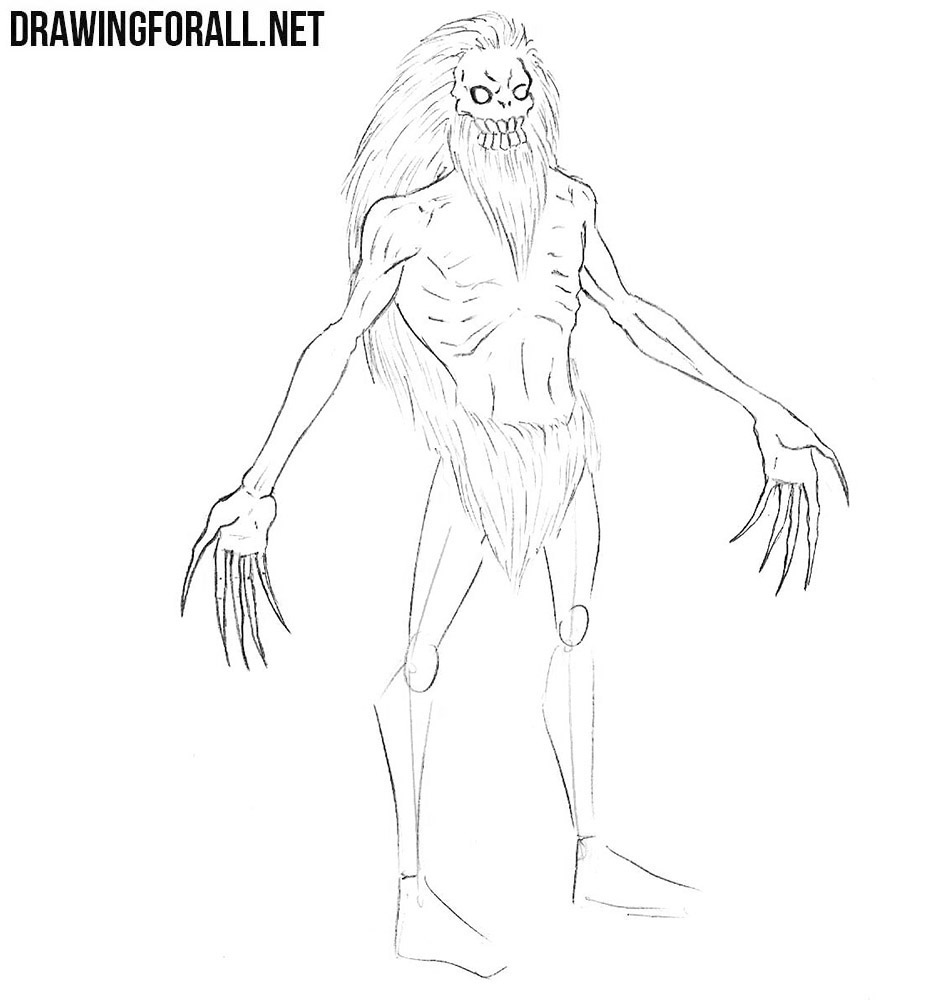 It remains to draw only the lower part of the body of the wendigo. Draw thin and wiry legs, drawing all the muscles and tendons as in our example. Draw the details of the feet and remove all the remaining unnecessary strokes from the wendigo drawing. 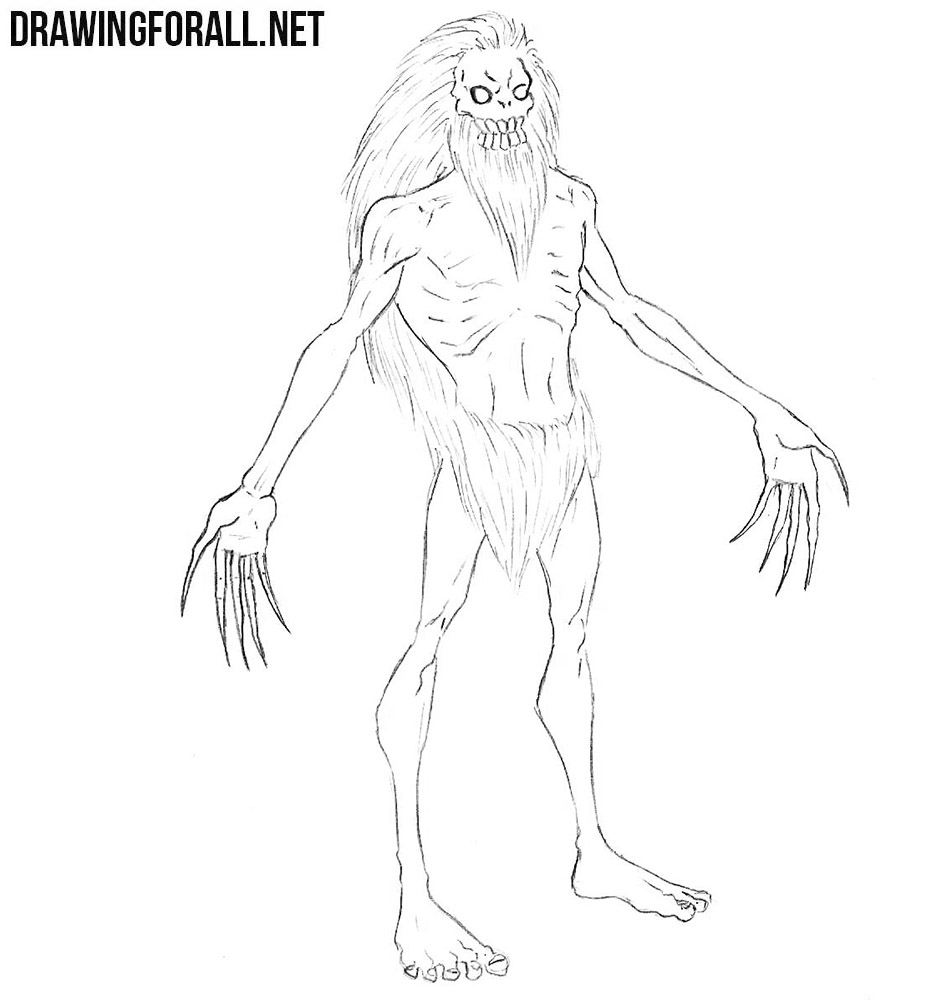 The final step of the lesson on how to draw a wendigo will be devoted to drawing shadows. Here we need to draw shadows by hatching, adding them to the least lit areas of the wendigo body. Also make the hair more realistic, adding more lines as in our example. And at the end of the step, draw a cast shadow under the feet.

What other creatures from myths, fantasy and urban legends do you want to learn how to draw? Write to us about this so that we can draw these monsters for you.