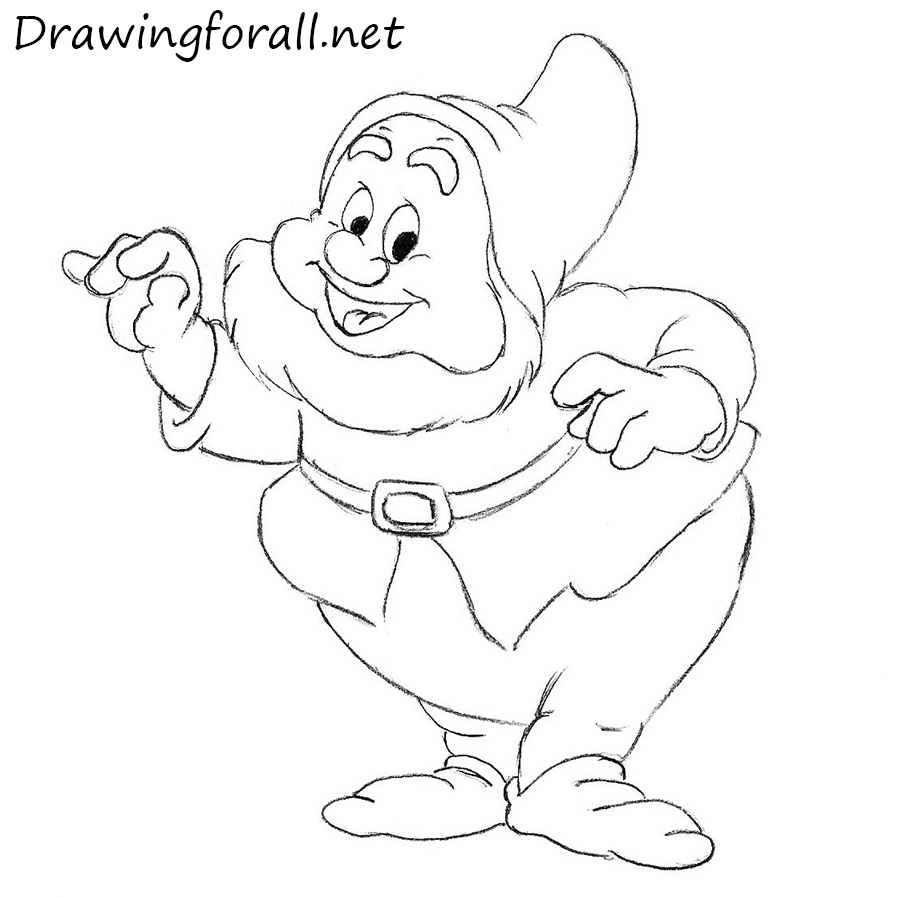 Hello, dear readers! Today we’ll show you how to draw a gnome (of a dwarf)! Many people know these fabulous creatures, presenting their appearance in accordance with the appearance of dwarfs from the movie “The Lord of the Rings.”

But today we are going to draw a gnome from Disney cartoons, it is clearly easier.

Let’s start with a stikman – man, made of sticks and circles, by which we denote the basic proportions of the figure of our character, as well as its position on the sheet of paper.

Naturally, the deviation from the normal, human proportions is going to be very significant (for example, the growth of the average human is the sum of the lengths of 7.5-8 its heads, but the growth of our gnome is about 2.3 heads). So, don’t make the body too long. Using a circle draw the head, and using lines draw the torso, arms and legs. 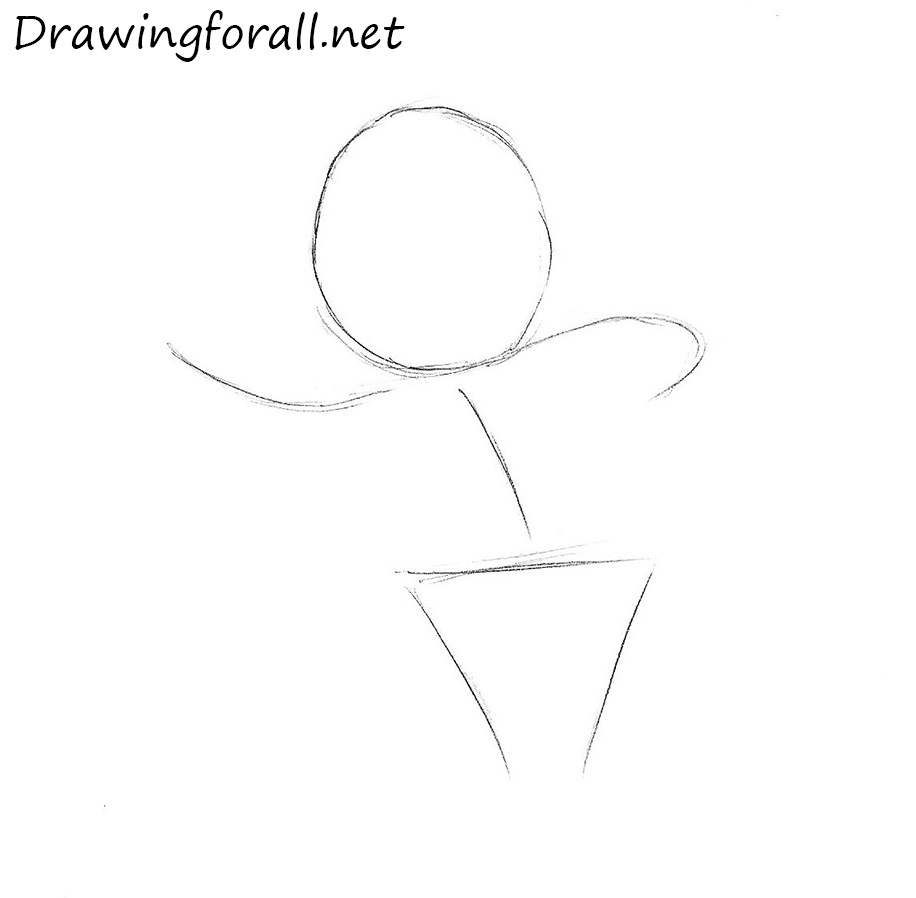 Now that you can see the approximate proportions, posture and position of our character, let’s start to add the volume to the figure.  First, mark up the head – draw a vertical line of symmetry of the face (it is curved and strongly shifted to the left relative to the visual center), the horizontal lines of the eyes and mouth (the last two are bent quite a bit).

On the top of the head outline the contours of the cap. In the same step outline the beard by light lines – it is almost parallel to the lower line of the head. 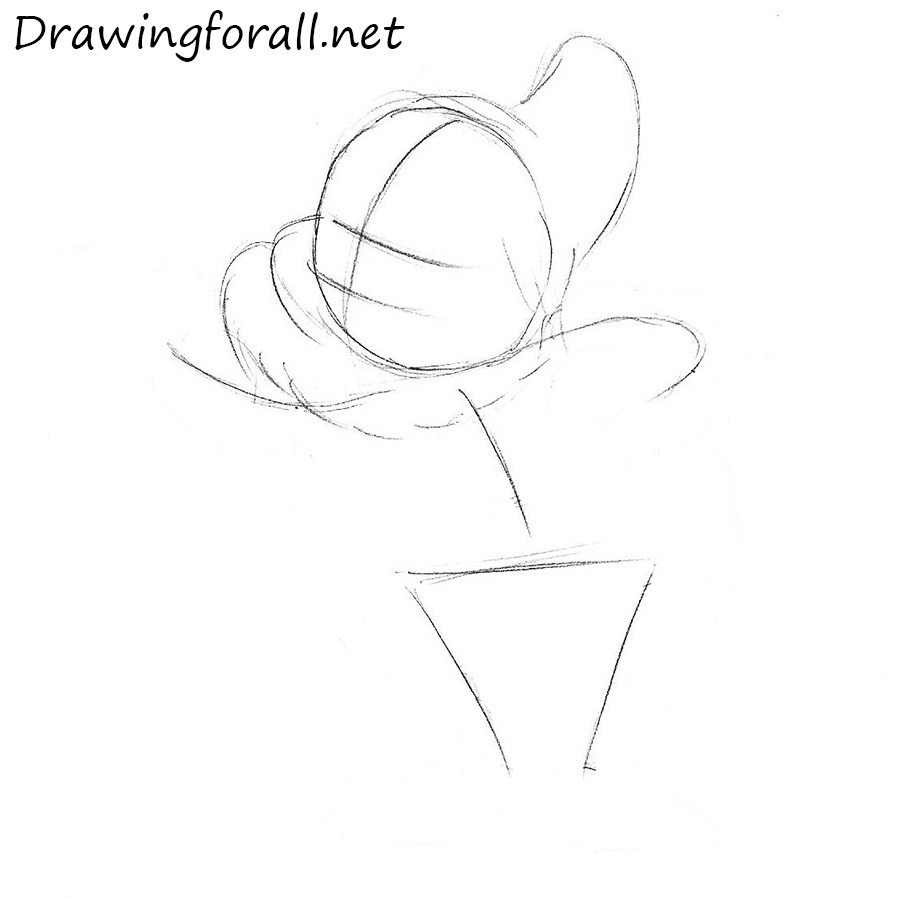 Using curved lines draw the contours of the torso. Next, the body curves smoothly into the short and thick legs. Note that the body is first expanded in the area of the belly, and then narrows as it approaches the feet. At the end of this step sketch out the feet. 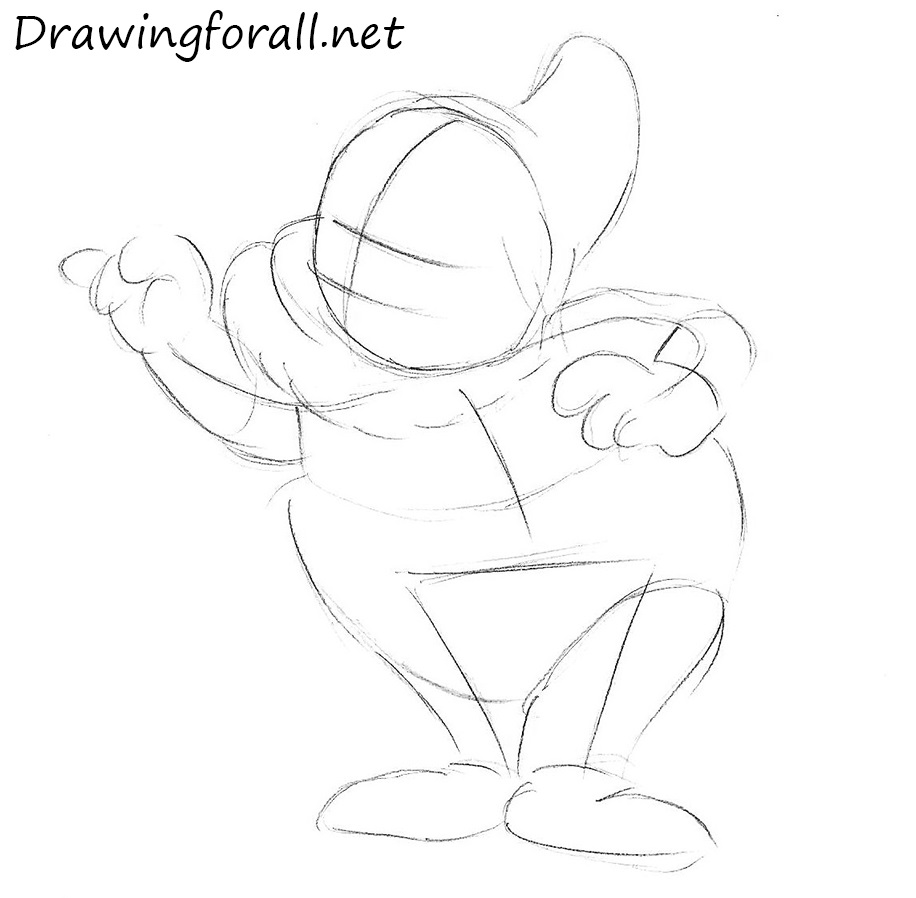 Let work with the face of the gnome. Using the markup from the second step, draw an oval eyes, nose (looks like a flattened potatoes), eyebrows, similar to commas and smiling mouth. Also draw the outlines of the cheeks and lower lip. 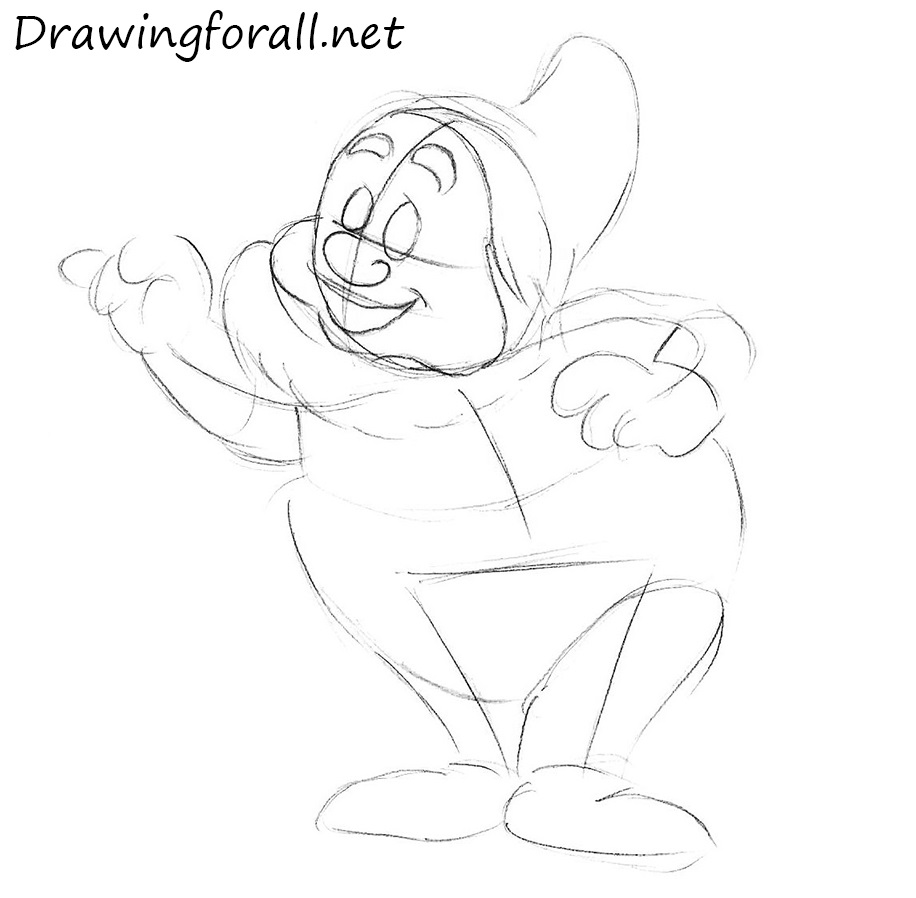 Now try to gently erase the extra guidelines of the previous steps, circle the features of the face and draw the details, like folds on the cap or wrinkles on the sides of the eyes. Do not forget to also draw the serrated line of the beard of our gnome. 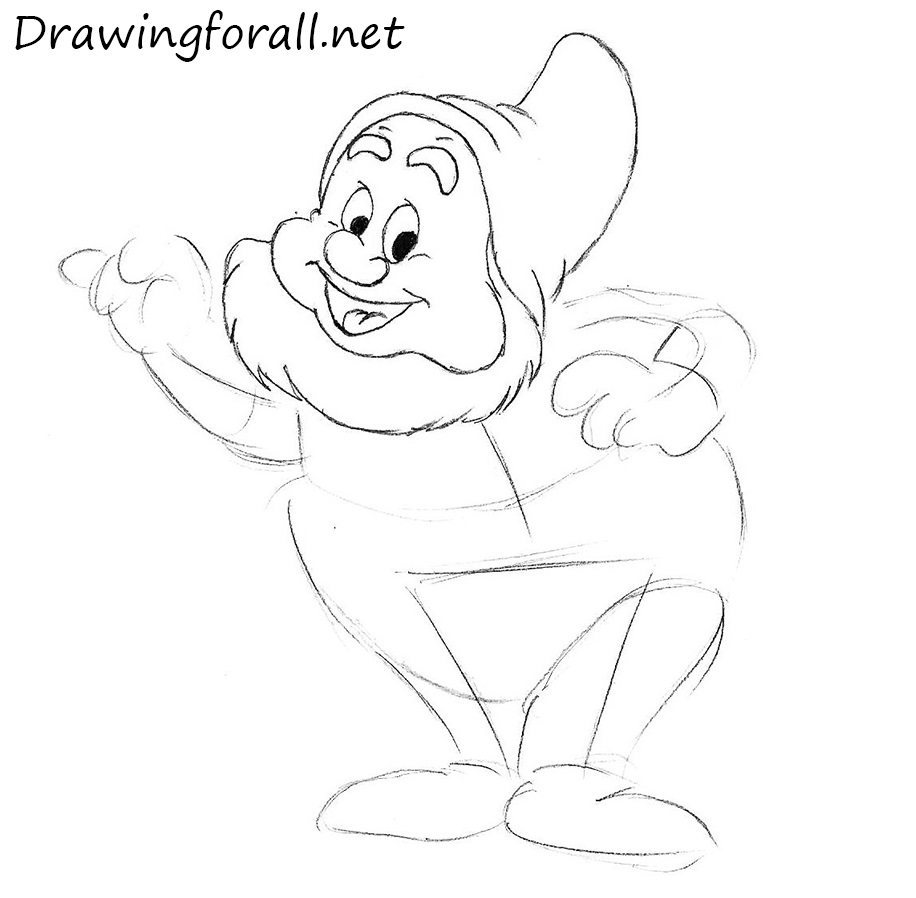 Repeat the actions from the previous step, only in relation to the arms, namely erase the unnecessary guidelines and circle the contours. Draw fingers on both hands, and draw the contours of the sleeves. 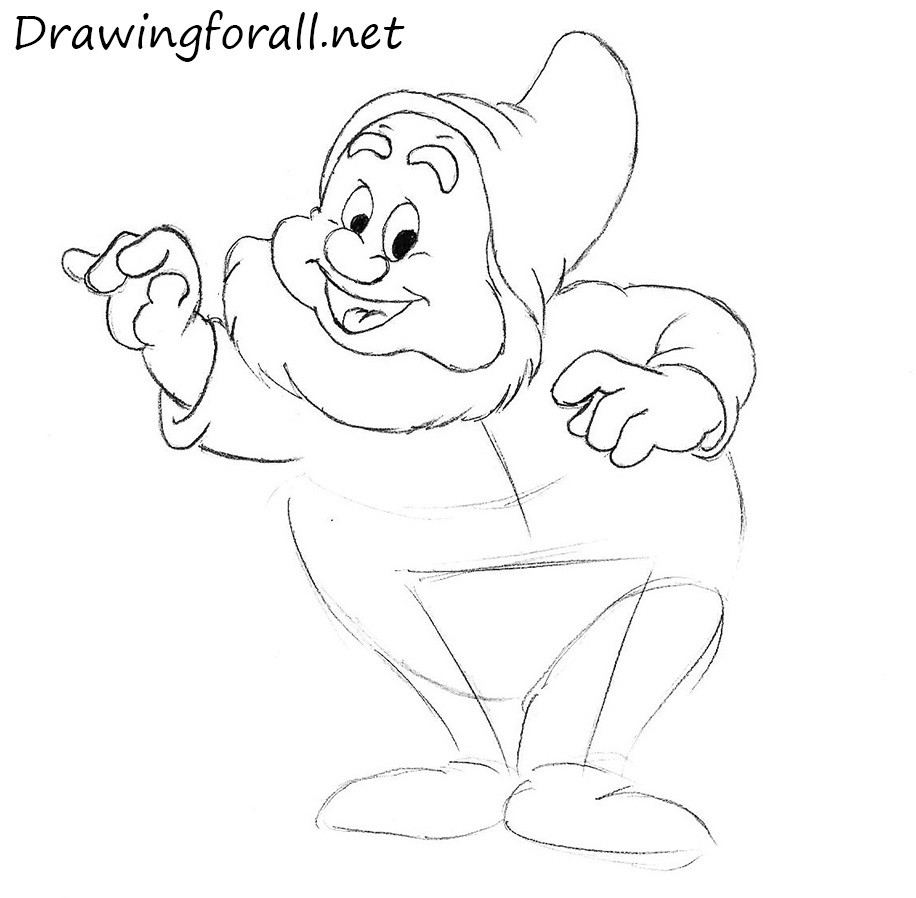 Proceed to the torso. It is important to say, that the belt tightens the clothing of our gnome. First draw the part of clothing which lies in the chest, then draw the belt, and then draw a lower garment edge. 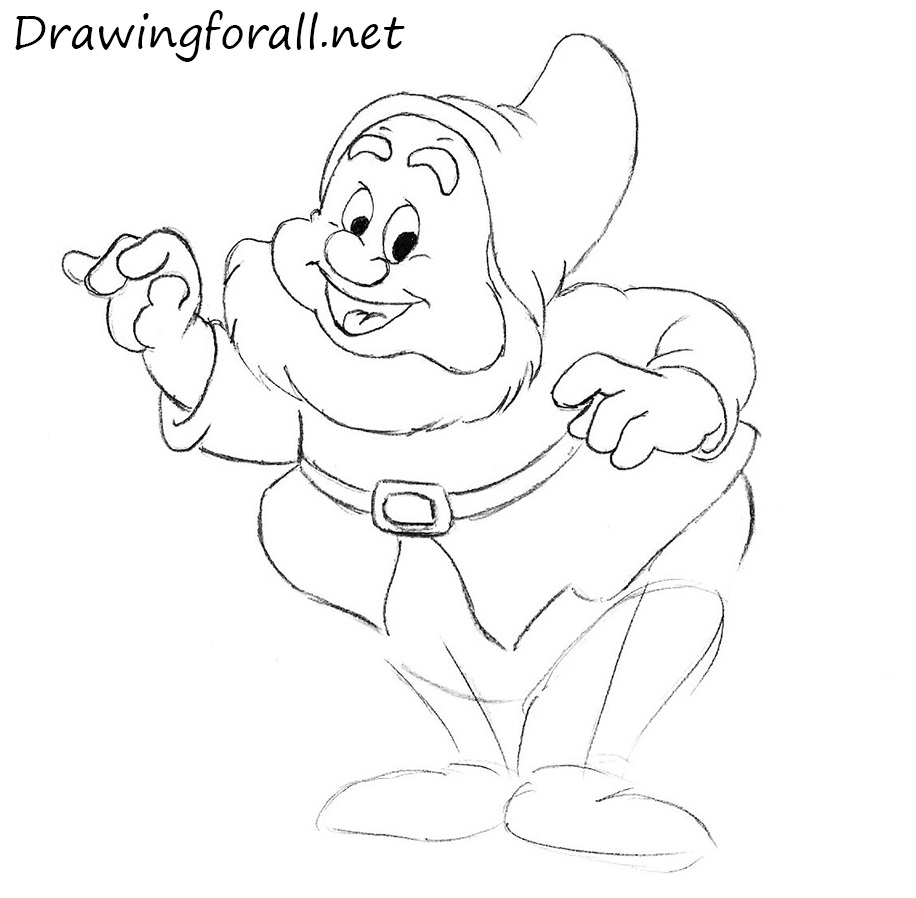 So, we on the last step of the lesson on how to draw a gnome. Draw the lower part of the torso and the short legs. Draw wrinkles on the shoes and pants. 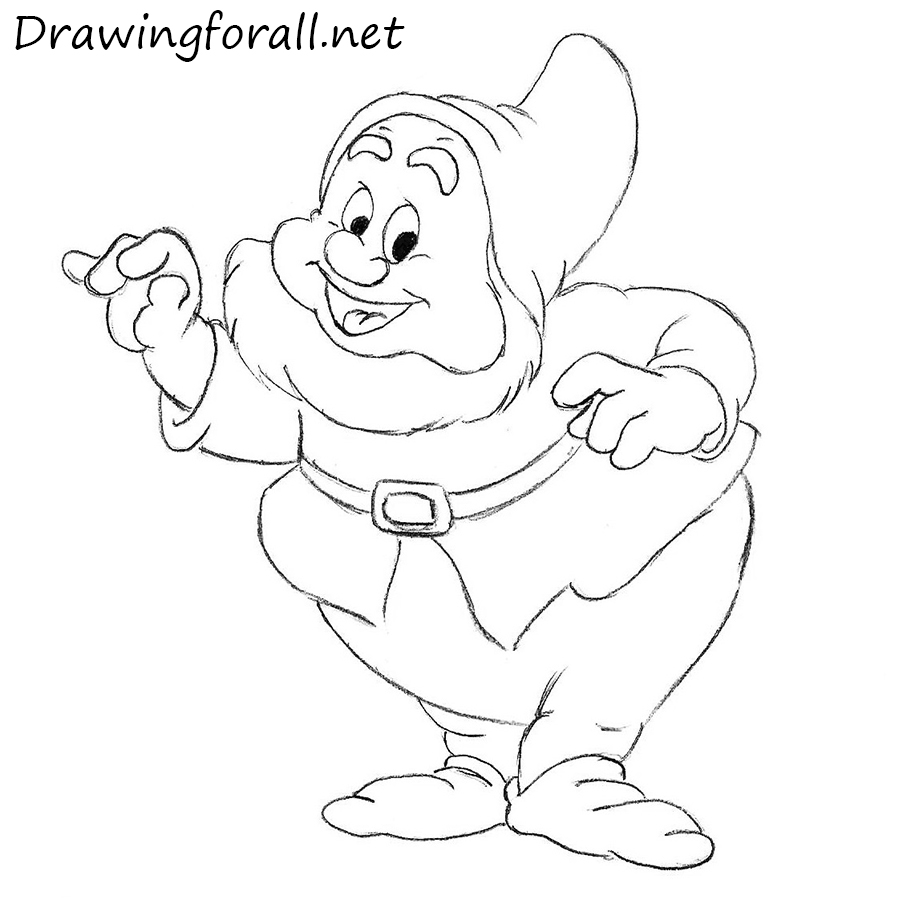 This drawing lesson was prepared for you by Drawingforall.net. Subscribe to us in social networks and wait for new drawing tutorials!