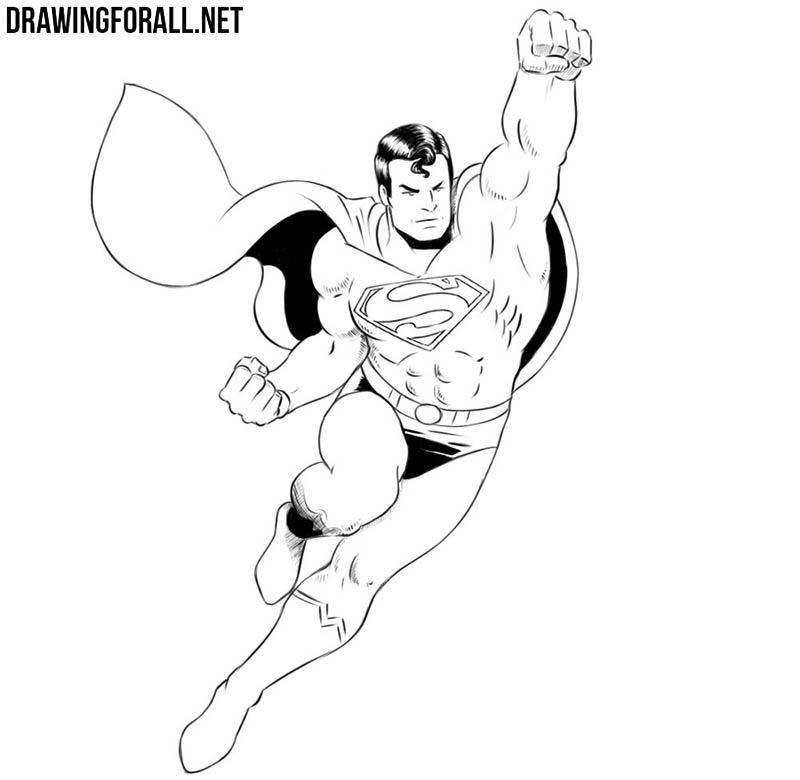 The team of artists and editors of Drawingforall.net will show you how to draw flying Superman in eight elementary and understandable stages. We have already published an instruction on how to draw Superman, but there this legendary superhero stood in a rather static pose. Despite the fact that in the instruction about how to draw Superman flying, his pose is more complicated, we are still sure that you will not encounter difficulties in the process of sketching, because we have divided this guide into eight simple steps and added to them the most simple and accessible explanation.

In order to properly draw Superman in flight, first of all we will mark his posture, or rather his skeleton in the posture we need. Let’s start with the oval head and spine line. Next, create a wide rib cage and pelvis. Next depict the limbs. Try to repeat the pose as the artists of Drawingforall.net did.

Depict a crosshair on the face, which will serve as a guide for the details of the face. Next, form the powerful neck and no less powerful torso. With a few simple geometric shapes, add some meat to the arms and legs. All parts of the Man of Steel’s body should be powerful and massive, and the muscles are already visible in this stage. 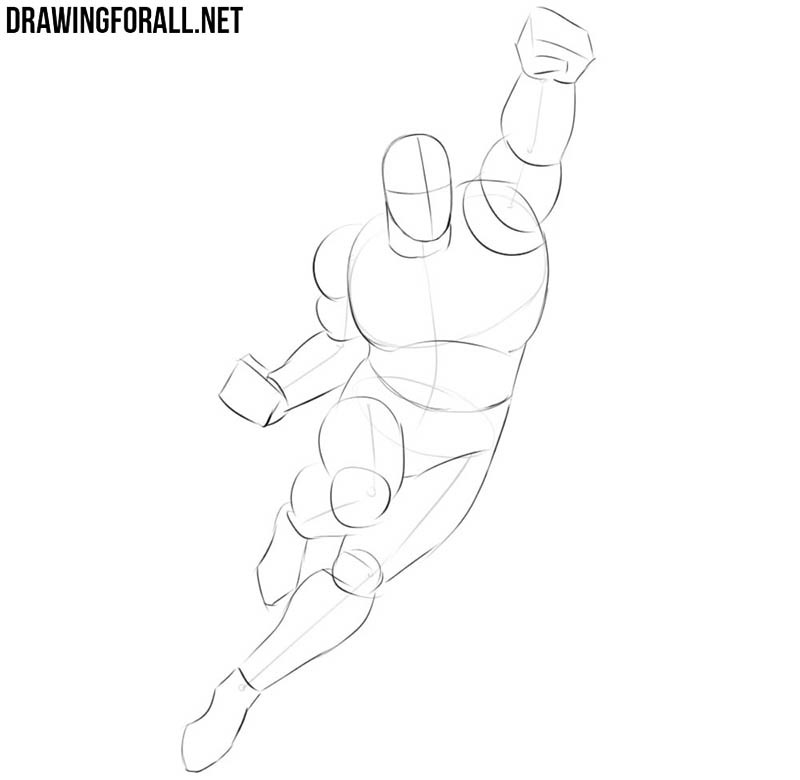 Now using light and rough lines add crucial details to the drawing of flying Superman. Let’s start with the head. Using rough lines depict the face lines and famous hairstyle. Next, move to the body, depicting the outlines of the costume and diamond-shaped logo on the chest. Complete this preparatory stage by outlining the waving cape behind the back. 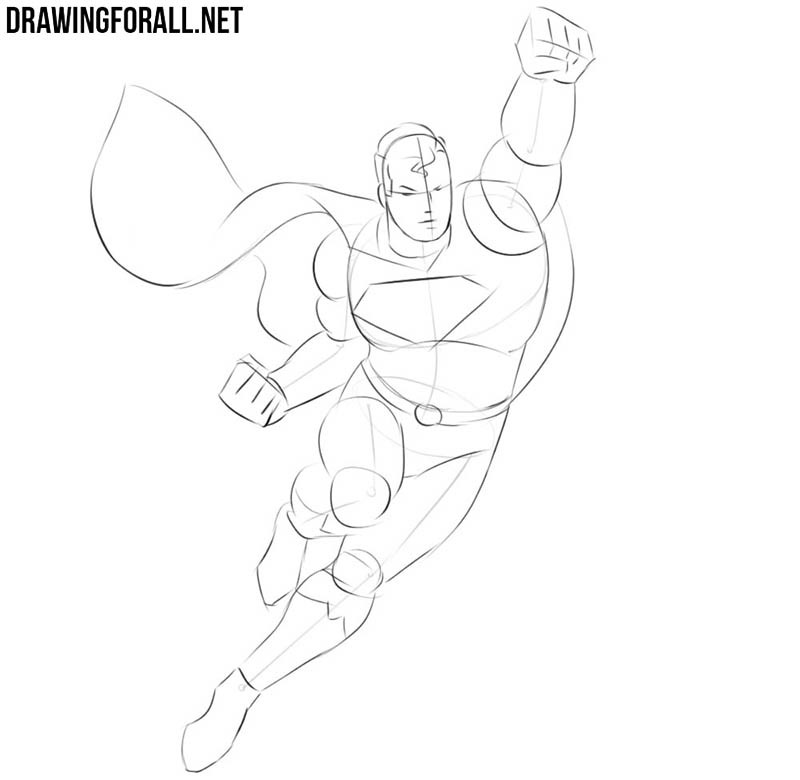 Starting from the fourth step, we will use darker finishing lines. Carefully depict the details of the face, as shown the example of artists of Drawingforall.net. Next, carefully trace the ears and powerful square jaw. Trace the outlines of hair and remove all unnecessary guidelines from the head. 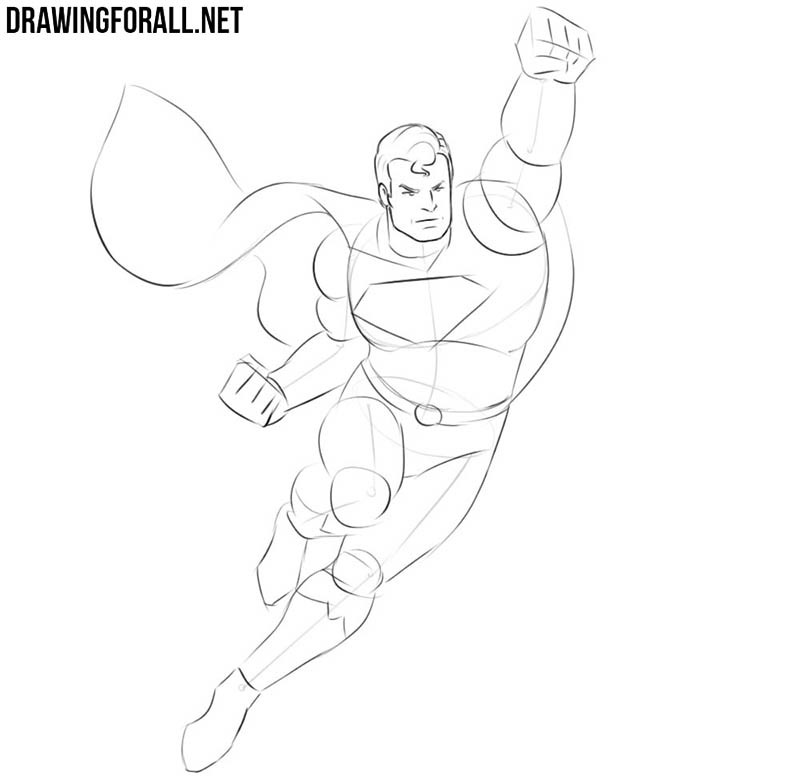 Depict neck muscles, powerful and large pectoral muscles and abdominals. In the middle of the chest draw the Superman sign (by the way, to learn more about it, visit our instruction on how to draw the Superman logo). Remove all unnecessary guidelines from the torso and proceed to the sixth step. 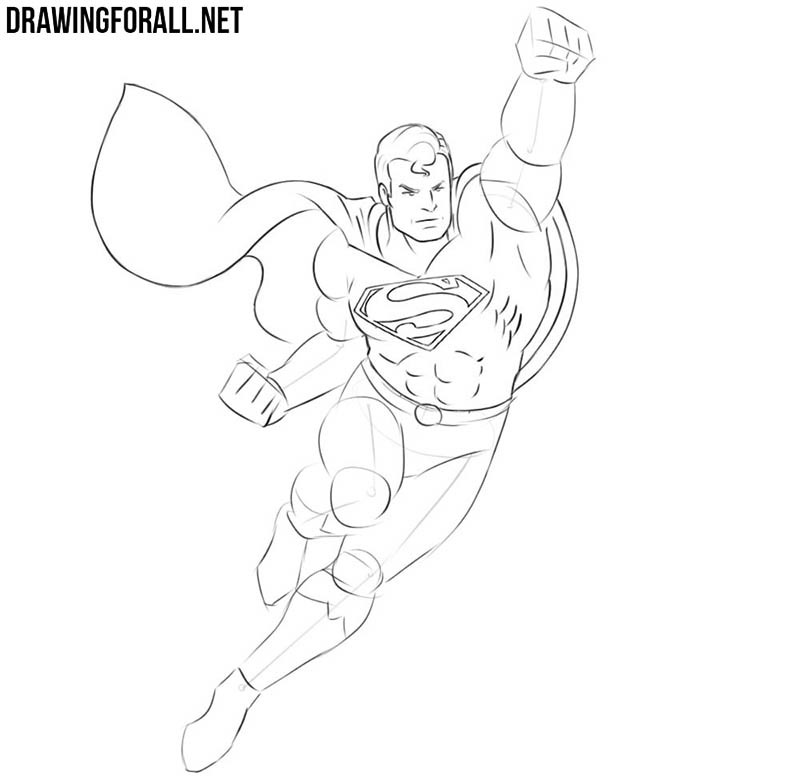 Carefully trace the rounded. All muscles should be slightly hypertrophied and tense, and the muscle lines should be strongly visible. Next, carefully draw clenched fists and a waving cape. Remove all unnecessary guidelines from the upper body and move to the lower limbs. 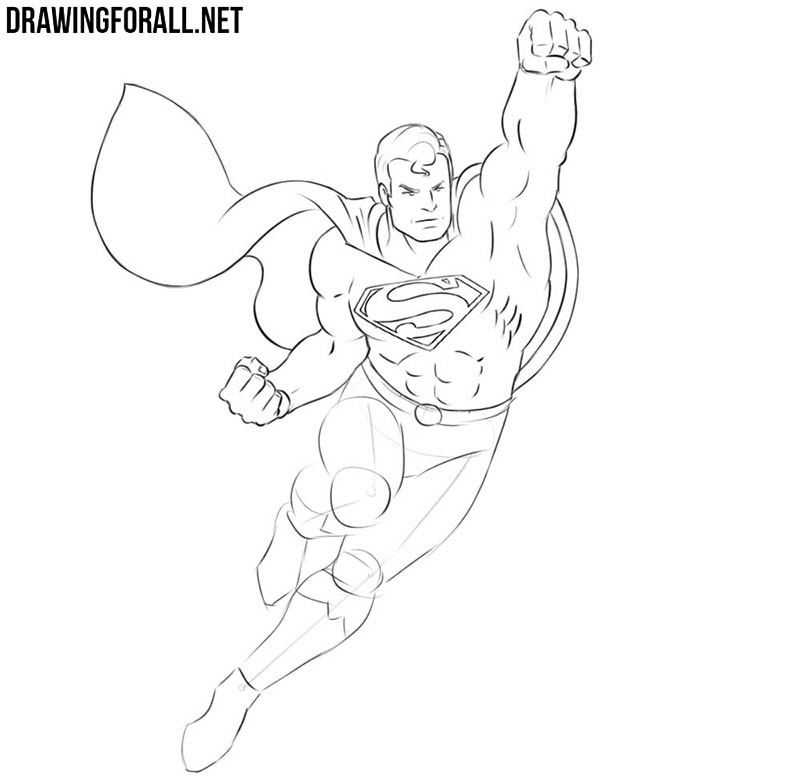 What we did in the seventh step we will do in this too. Using clear and smooth lines trace the legs and all the muscles of the legs, as shown in the figure below. Draw the lines of the shoes, knee joints, folds and remove all the remaining unwanted guidelines from the drawing of flying Superman. 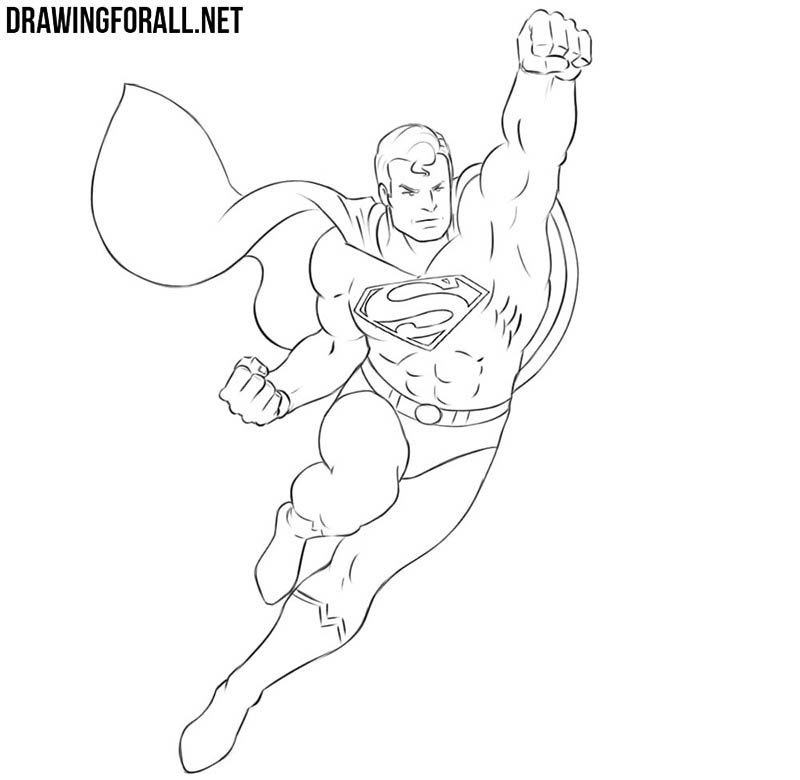 Let’s depict the shadows. Here they are made in the classic style of comics, and look like dark parts of contrasting shadows. To draw such shadows, first draw their outlines, then fill them with a dark solid black color. In the same step, paint the hair, leaving highlights and draw lighter shadows with hatching.

In this comic art instruction, we have described you in eight simple steps how to draw flying Superman. Write to us which superhero or supervillain you would like to see on the pages of Drawingforall.net.