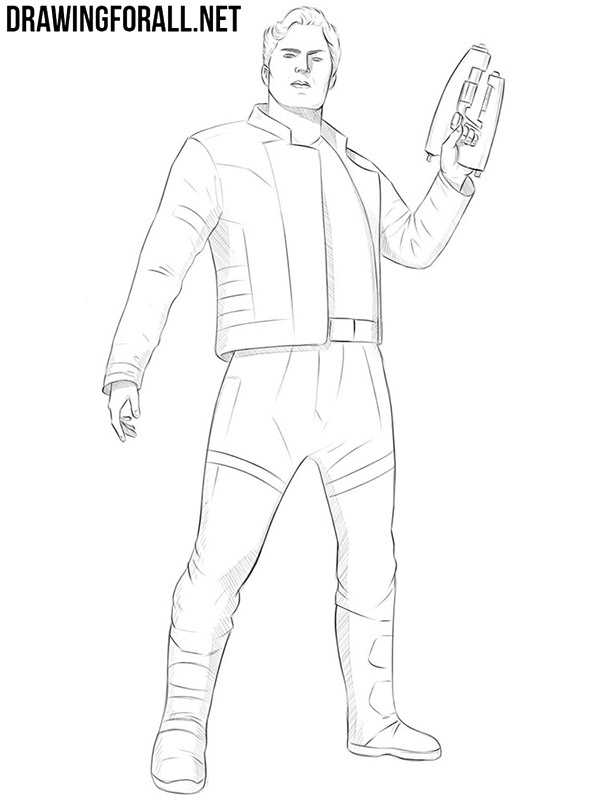 We drew a lot of members of superhero teams. We tried to embrace the universes of Marvel and the DC as fully as possible. Today we decided to recall the member of the team Guardians of the Galaxy from  Marvel Universe. More precisely, it is the leader of the team. So let’s start this lesson to learn how to draw Star Lord from Guardians of the Galaxy

If you watched the films of the universal universe of Marvel, you remember that the Star Lord is a little fat. However, he was not always plump. In this lesson we will draw him in the form of a young man with a normal physique.

Shoulders may seem somewhat already due to the angle. The pelvis looks big because the character’s legs are straight. 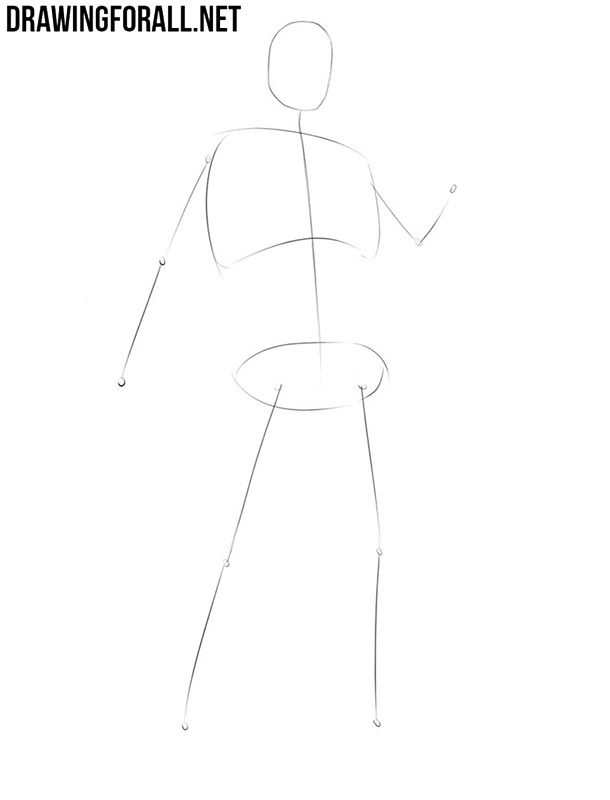 Let’s draw the contours of the neck, pelvis and torso. You will not see the usual narrowing at the waist like many other heroes with an athletic physique. In fact, our hero is dressed in loose clothing. We do not draw the contours of his body, but his clothes are actually. 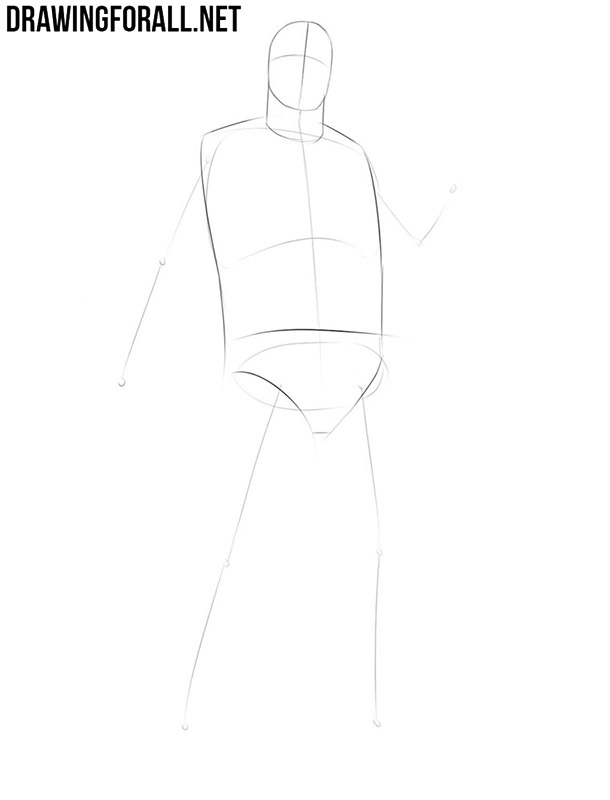 Now let’s work on the limbs. Hands should not have any physiological curves. Hands in our case look like bars and circles. Imagine that you are drawing a wooden soldier. Hips and tibiae should have a barely noticeable bend. Use coarse large pieces to portray loose wide pants.

The head of comics characters is one of the most difficult part of the drawing tutorial. Gently sketch the location of Star Lord’s eyes, mark nose with a short line and the mouth with another one. In the same step, you need to outline the contours of the jaw and hair.

This step will be devoted to the fact that we will draw the details of the head of Star Lord. Sketch the eyes and outlines of the mask around the eyes. Next, draw the nose and mouth. After this sketch out the outlines of the jaw, ears and hair. Do not forget to remove unwanted lines from the head. 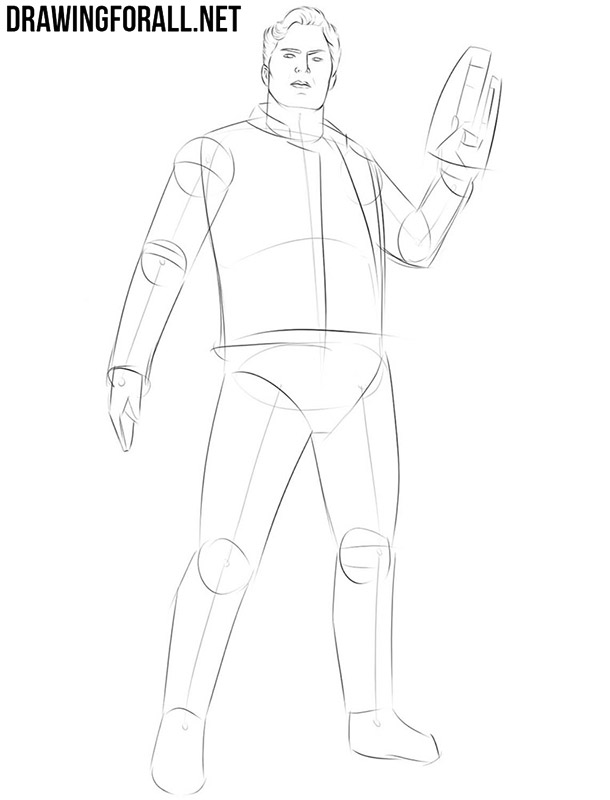 Now it is time to draw Star Lord’s body. First of all, we sketch out rectangular outline of the jacket.  Next, draw the outline of the shirt and draw the belt. In the end of this step we can remove unnecessary guidelines from the body. 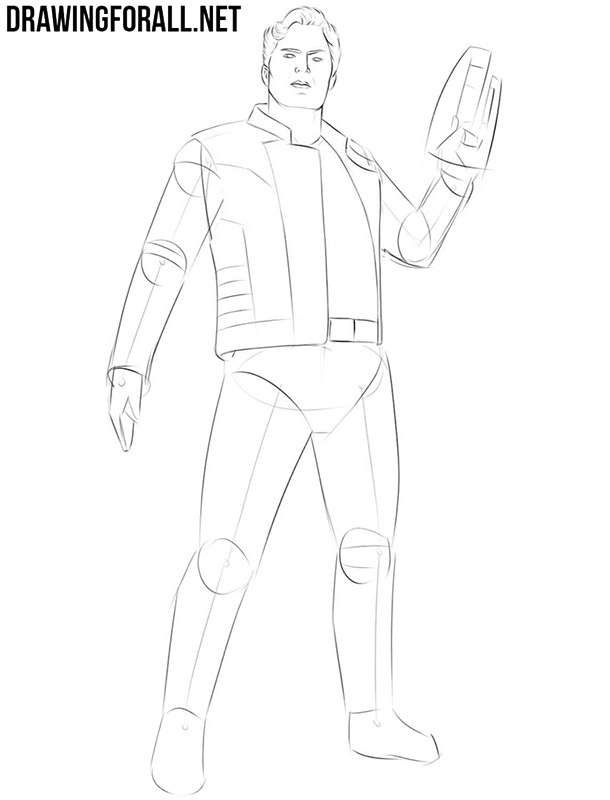 So we have another rather difficult stage of the drawing tutorial about Star Lord, in which we will need to draw out the arms in detail. With the help of clear and dark lines we draw out the large deltoids, biceps and forearm muscles. In the same step, we carefully depict the hands and laser gun. 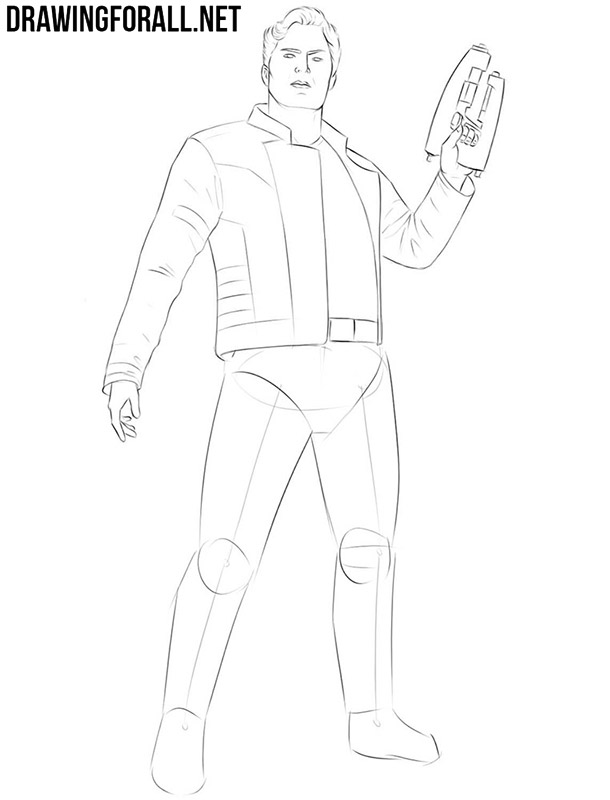 Now it’s time to draw out the legs in detail. As you can see, the legs are pretty wide and massive. With the help of dark and slightly curved lines, we need to carefully circle the contours of the legs. Draw all folds and the outlines of the muscles. In the same step we will draw high shoes of Star Lord. 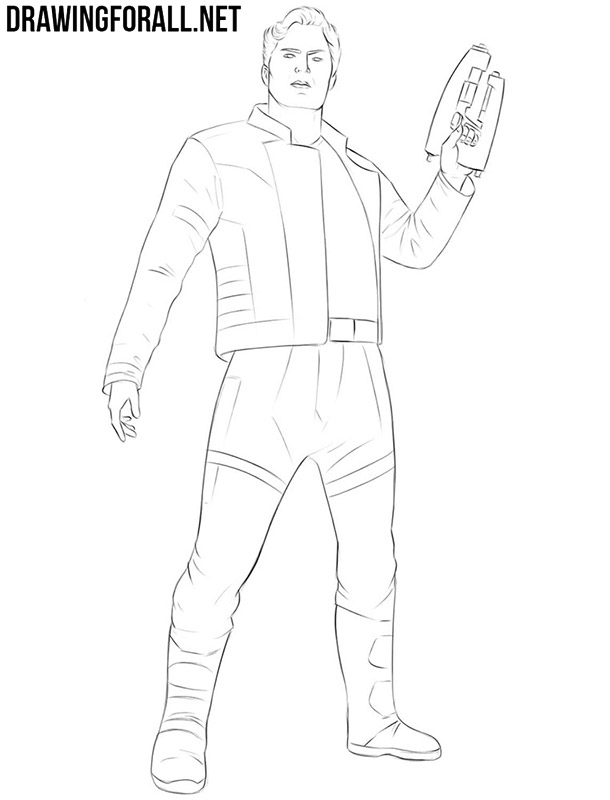 And the final step of the drawing tutorial about about how to draw Star Lord, which will be devoted to the shadows. First of all paint the face and neck area. Next, paint over the jacket, as shown in our example. Next, let’s add some shadows to the legs using dense hatching.

Would you like to see a drawing lesson about another superhero on drawingforall.net? We are waiting for your comments in the comments section of this article or on our pages in social networks. We work so that you improve your skills every day!