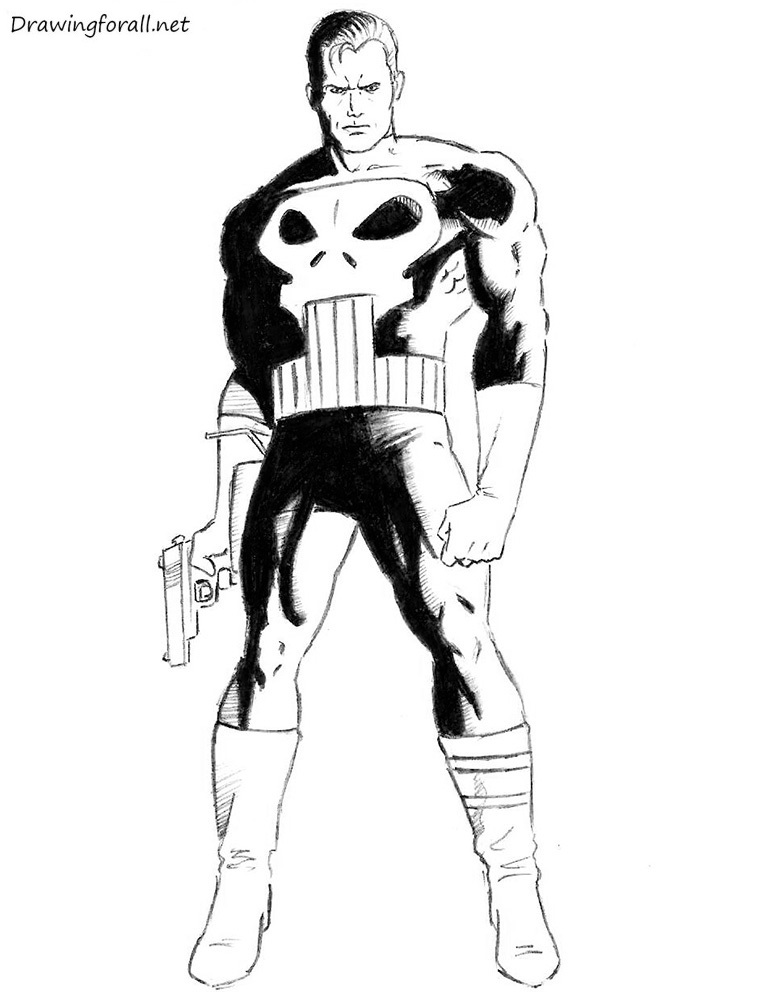 Hi! Today we will draw one of the most dark and brutal characters in Marvel Universal. So we are happy to present you a lesson on how to draw Punisher. The reals Punisher’s name is Frank Castle. The story of this man is tragedy – Frank lost his family when they accidentally got into a shootout, set up by the gangsters. After this Frank began to destroy the gangsters and another criminals in the cruellest manner.

First step is stickman’s drawing. Look the post in which we told how to draw Captain America. First step of this lesson includes the rules of drawing a human figure. 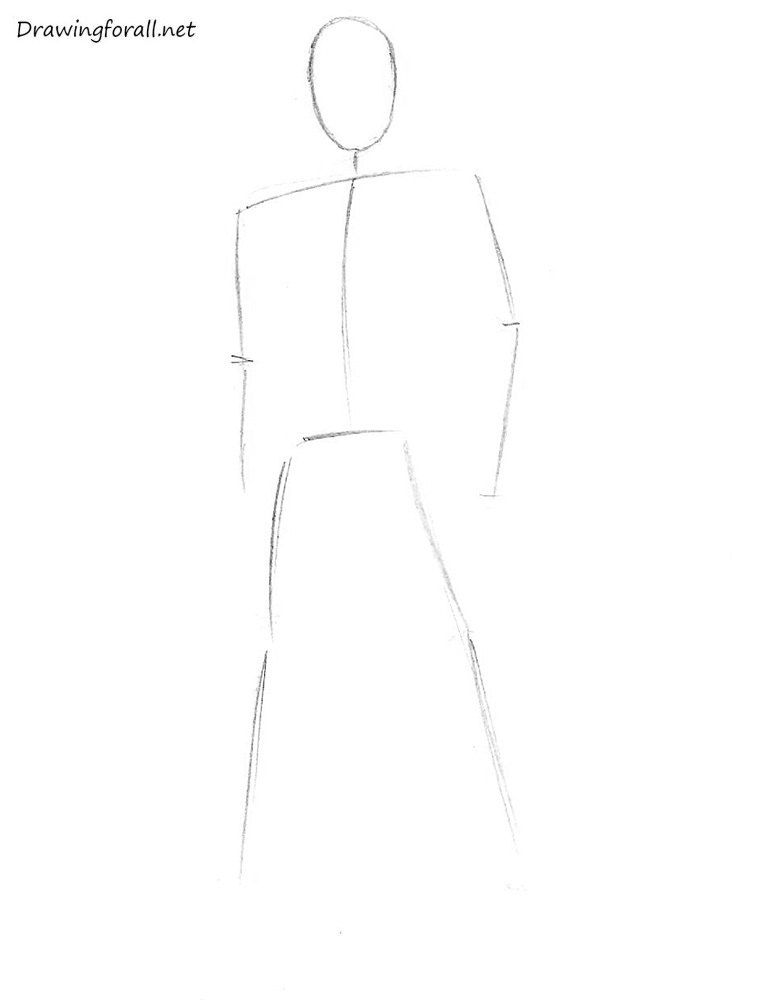 First draw the neck – it looks like short cylinder which serves as a support for a head. After this draw the big circles located in the upper parts of the arms. This circles are sholders’s deltoid muscles. Then connect this figures with the neck. Now let’s draw the hands. Look at this scheme in which we marked main muscules of the sholder, the forearm and the fists: 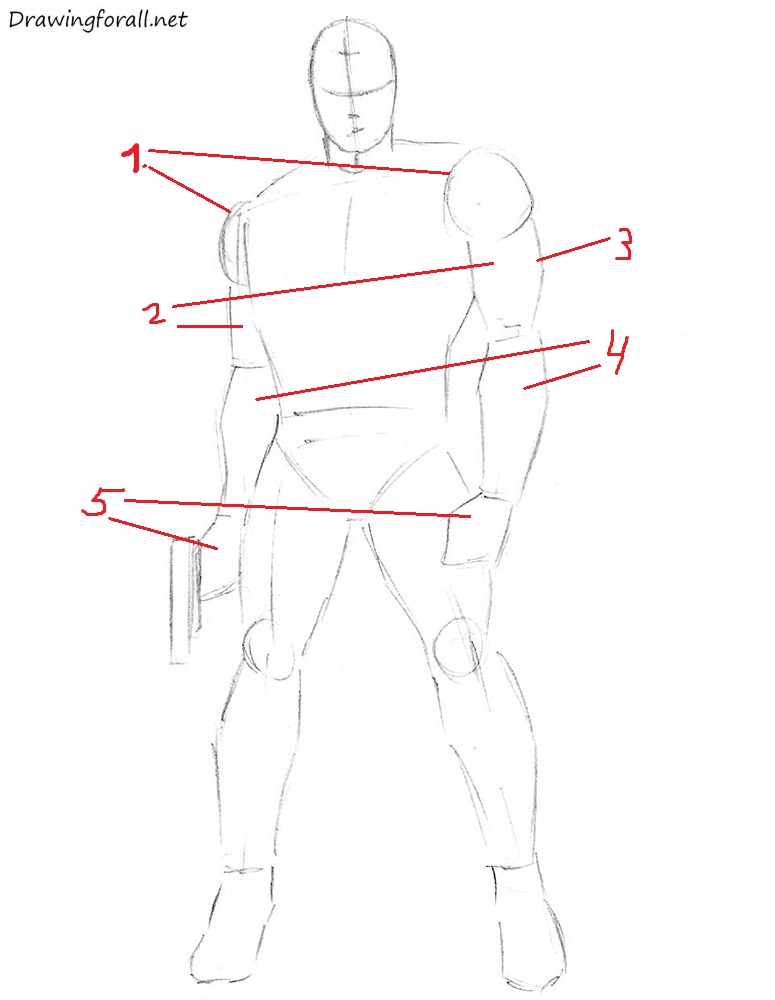 Then draw the body. It is wide at the top and then tapers in towards the pelvis. Top trunk wide for massive chest muscles and the latissimus dorsi.

Ok, let’s draw  the contours of the legs. The silhouette of the foot formed: 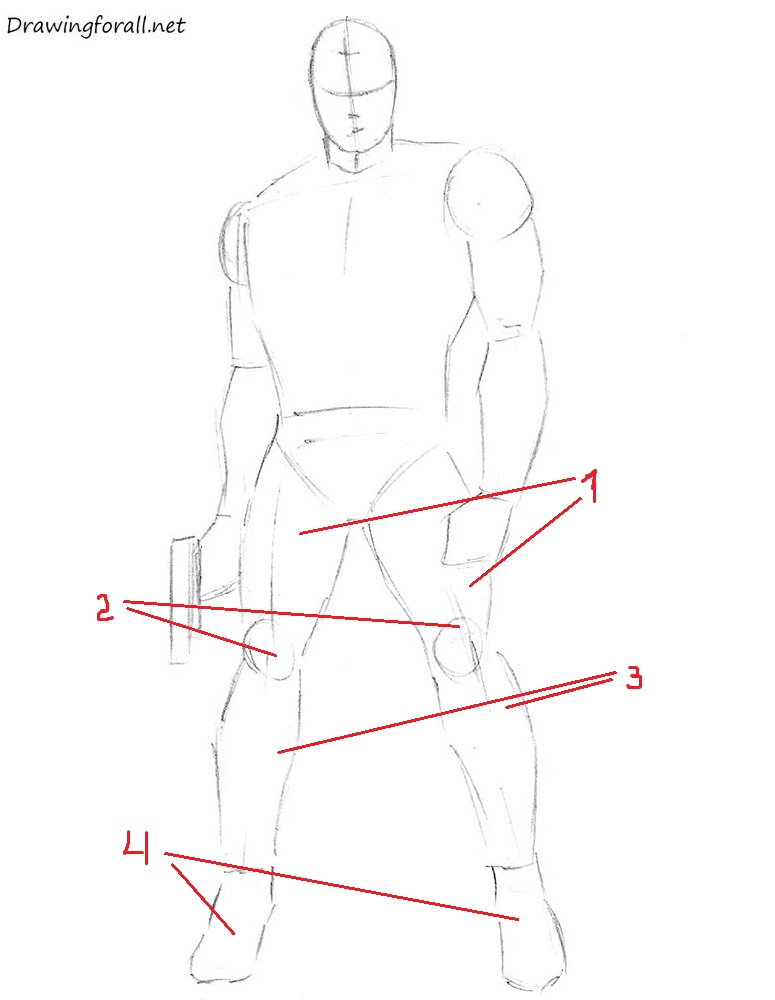 The past part of this step is drawing of the face. First draw the vertical line of the facial simmetry. Then draw a line which marked location of the hair. Below this line is slightly curved eye line. Below that you can see the lines of the nose and month. 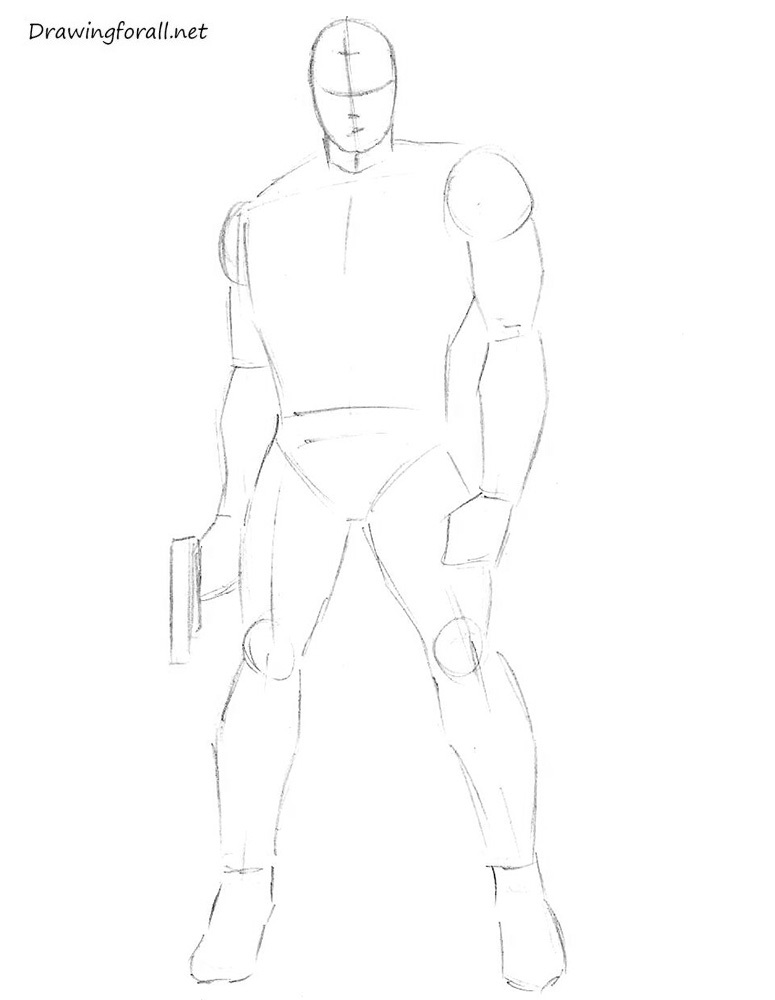 Ok, we continue to draw Punisher from Marvel. This step will be very short, espeсialy after the previous step. So’ let’s detail the face.There is an important rule that the top edge of the ears should be in one plane with the eyebrows, and the lower with the tip of the nose.

However, in our case the Punisher’s head tilted downwards, so the upper tips of the ears are above the eyebrow, while the bottom above the tip of the nose. Look at the close-up: 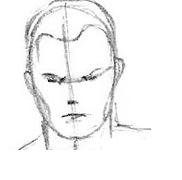 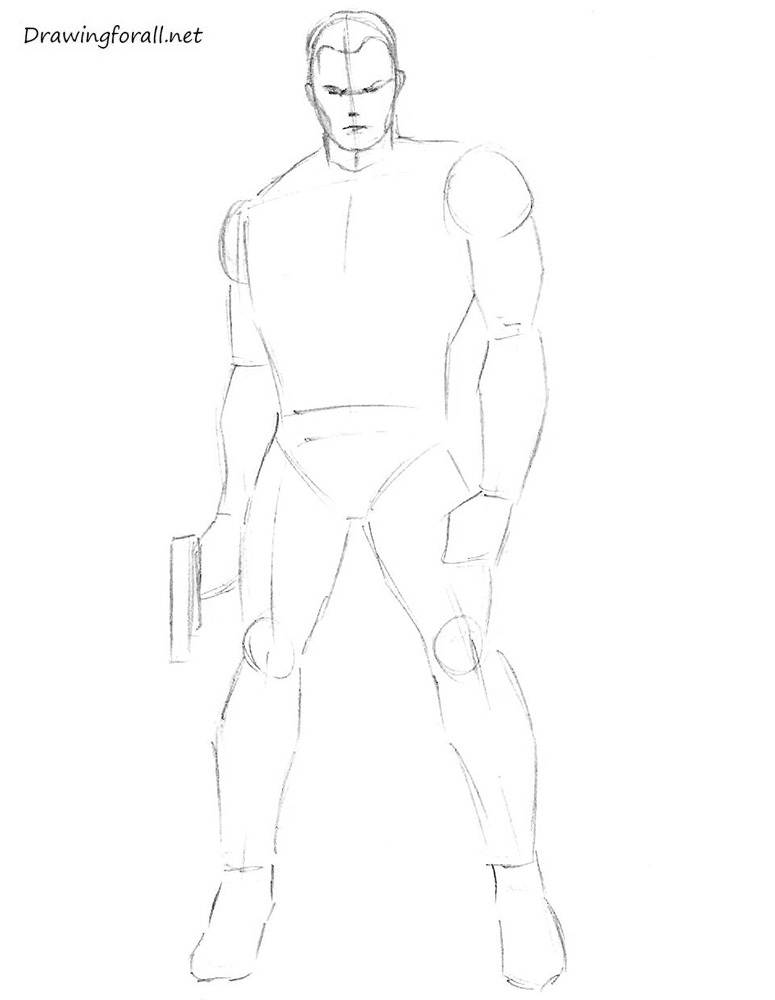 It’s time to finally detalisation of the Punisher’s face. First draw the hair, don’t forget – the right way is from from roots to ends. Then draw the eyes and wrinkles between the eyes (see close up): 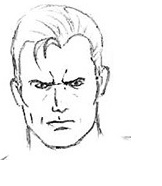 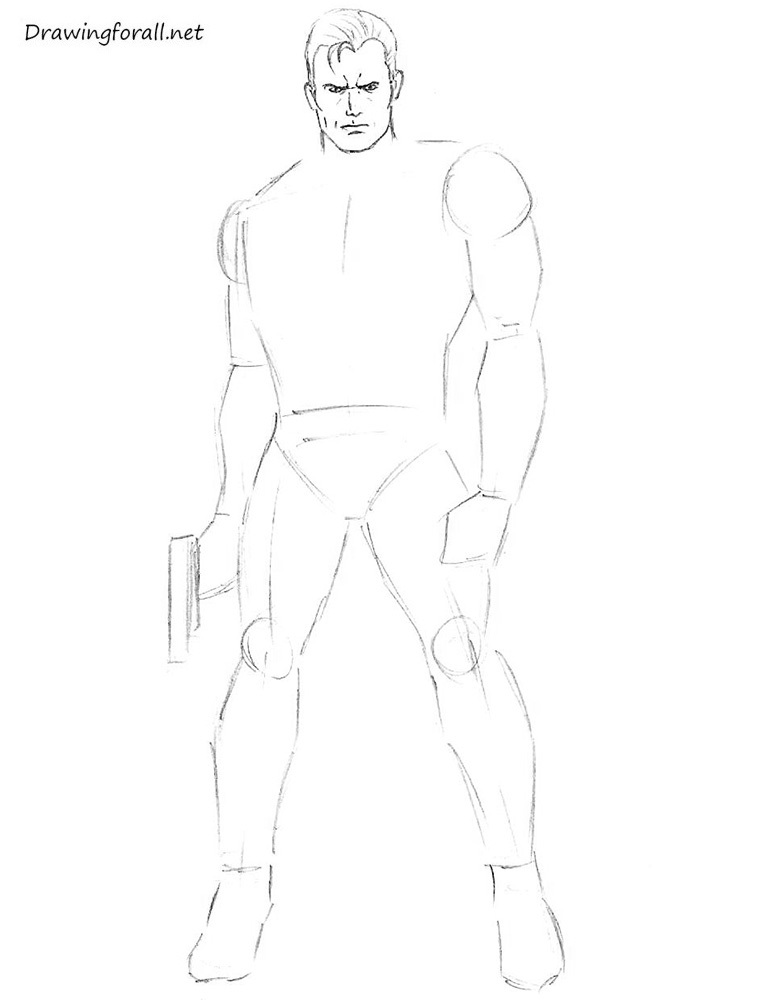 Ok, let’s draw the Punisher’s body. First darken the lines between the neck and the shoulders.Then draw a сlavicles looks like short oblique lines. After this, draw the skull of the Punisher. 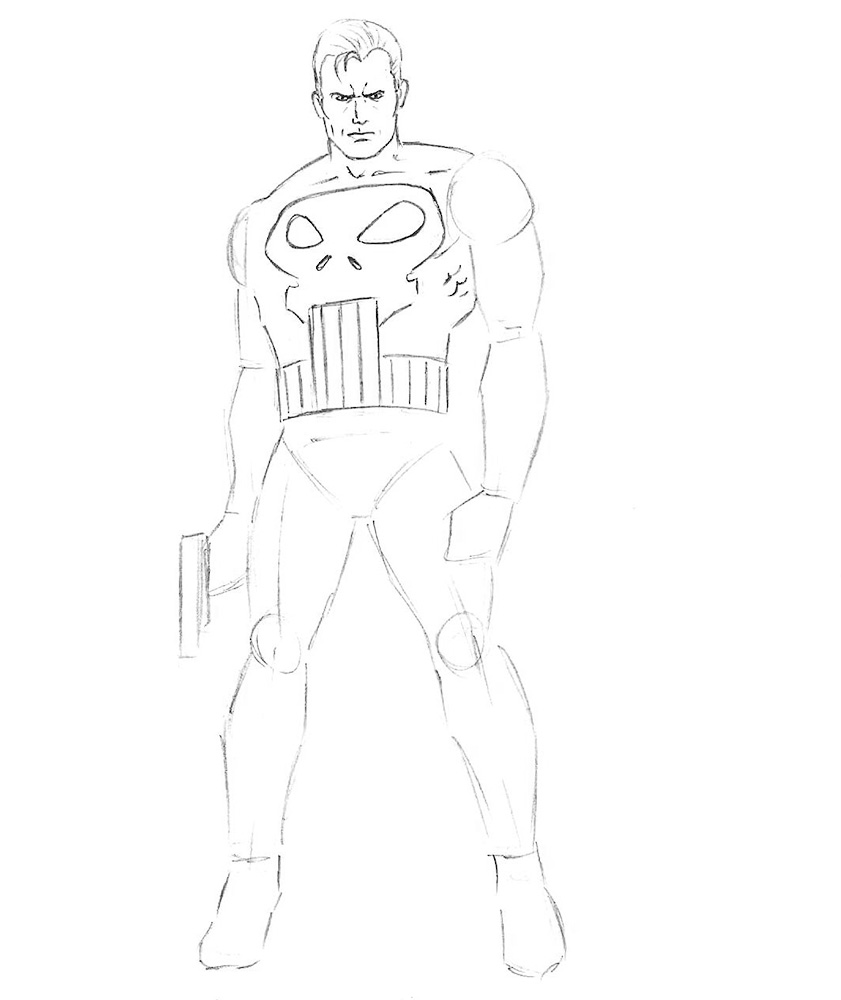 Erase all unnecessary lines from hands. It’s easy if you know how look the main hand’s muscle groups (look at the second step). But the drawing of the palms is not easy, that’s why we made these plans:

Look at Punisher on the general plan: 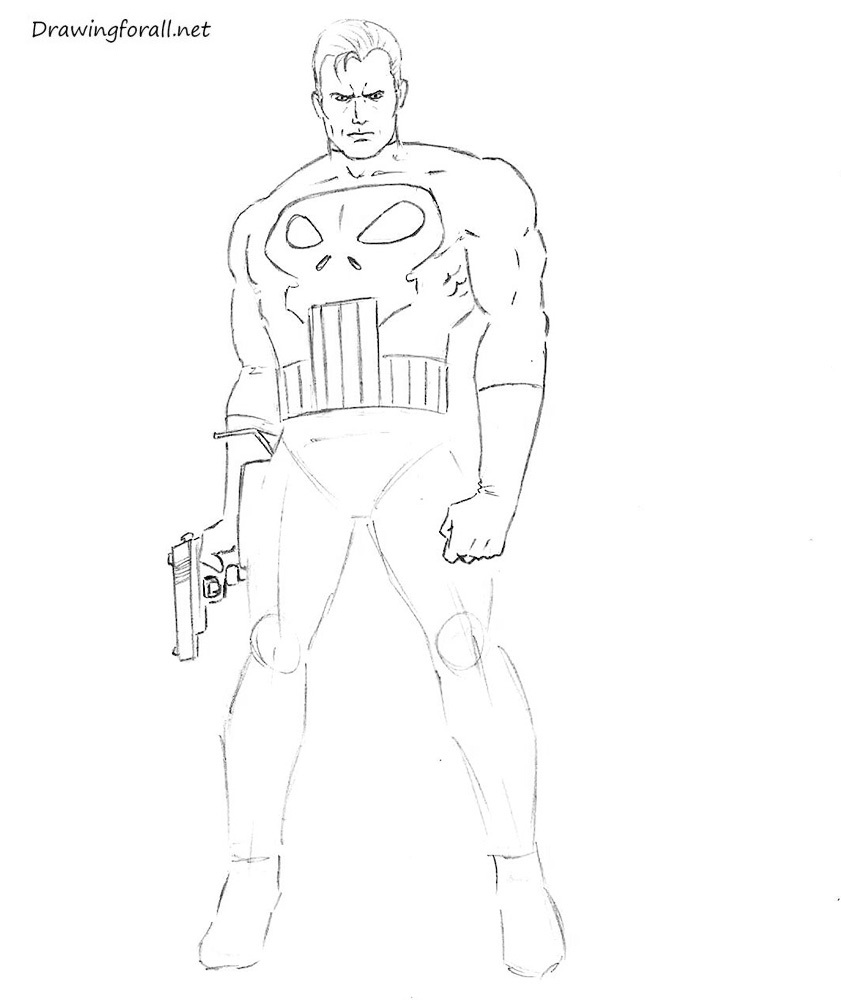 We continue the tutorial in which we told how to draw Punisher step by step. Now we will darken the contours of the legs. Also in this step draw the folds of skin on the boots.

Ok, let’s finish this tutorial. Now we have a step in which we will draw the shadows. As you can see, the drawing of the shadows is two stages: 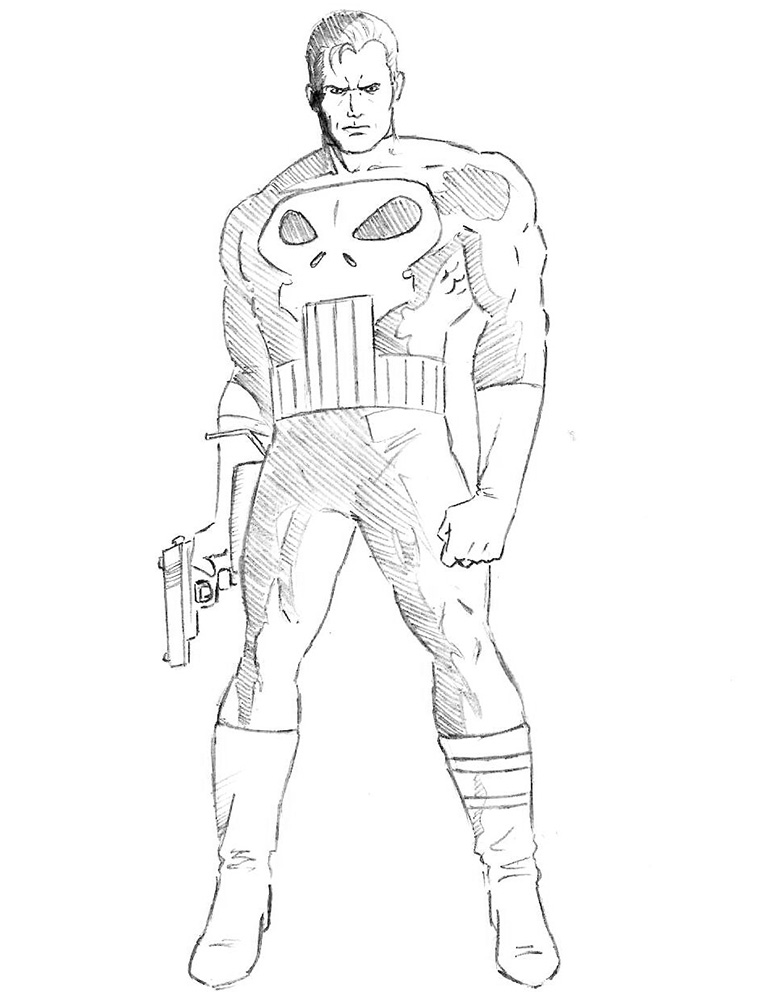