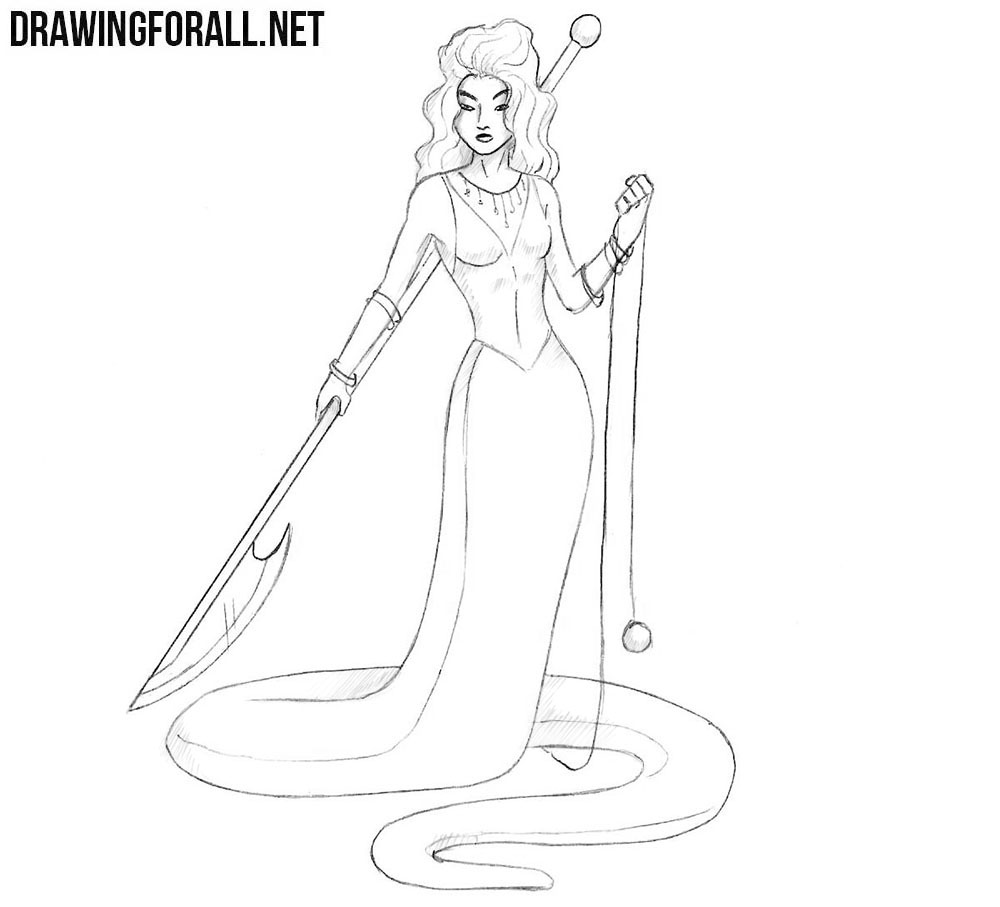 The world of myths of ancient Greece is diverse and interesting, and it has stories about different heroes and villains. We have already created a lot of lessons about many characters from ancient Greek mythology, and in this lesson we decided to continue this topic and create a lesson about how to draw Echidna – a gigantic snake woman.

As you can see, Echidna combines the features of a human and a snake. Therefore, we sketch out the head in the form of an oval and the neck line, which goes into the spine and then into the tail. Sketch out the shape of the chest and arms. 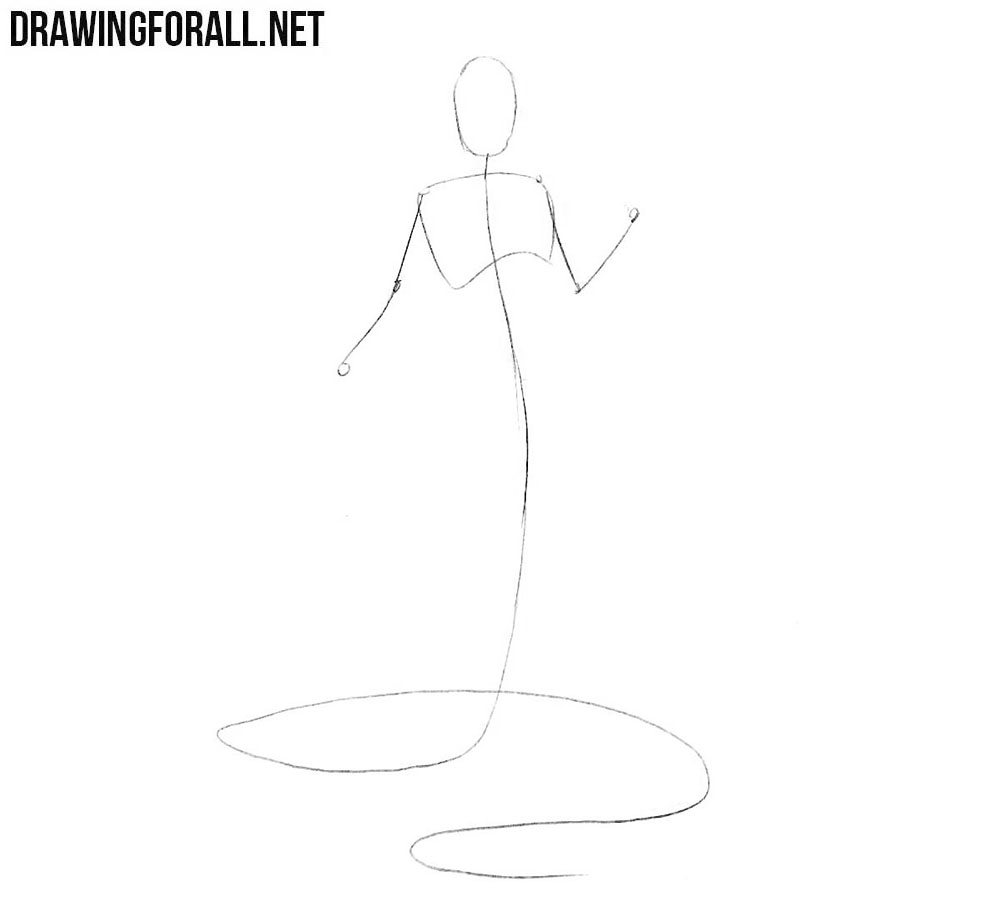 Draw two lines on the head, with which we further draw the details of the face. Next, draw out the shape of the torso, which smoothly goes in the long snake tail. With the help of simple geometric figures sketch the outlines of arms. 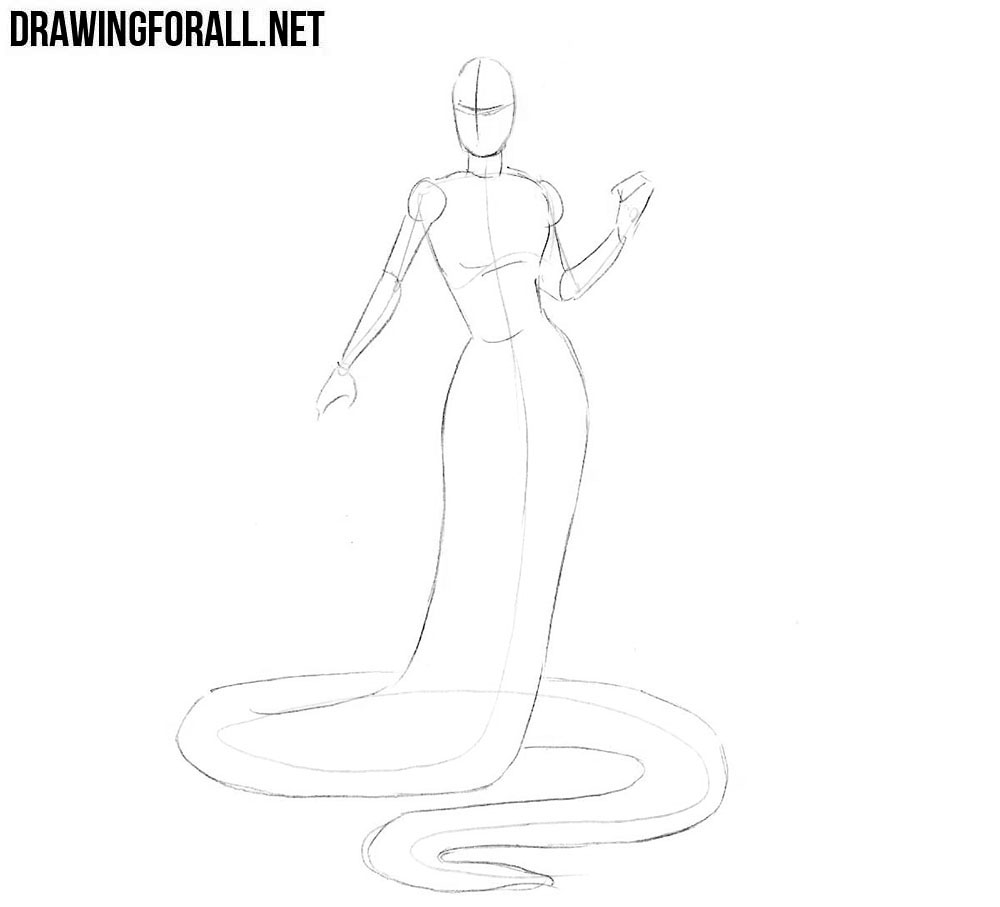 Let’s now add some details to the body of our Echidna. Sketch out the curly hair, a long weapon in hand, than similar to a spear and another weapon in the other hand, similar to a rope with a heavy load at the end. 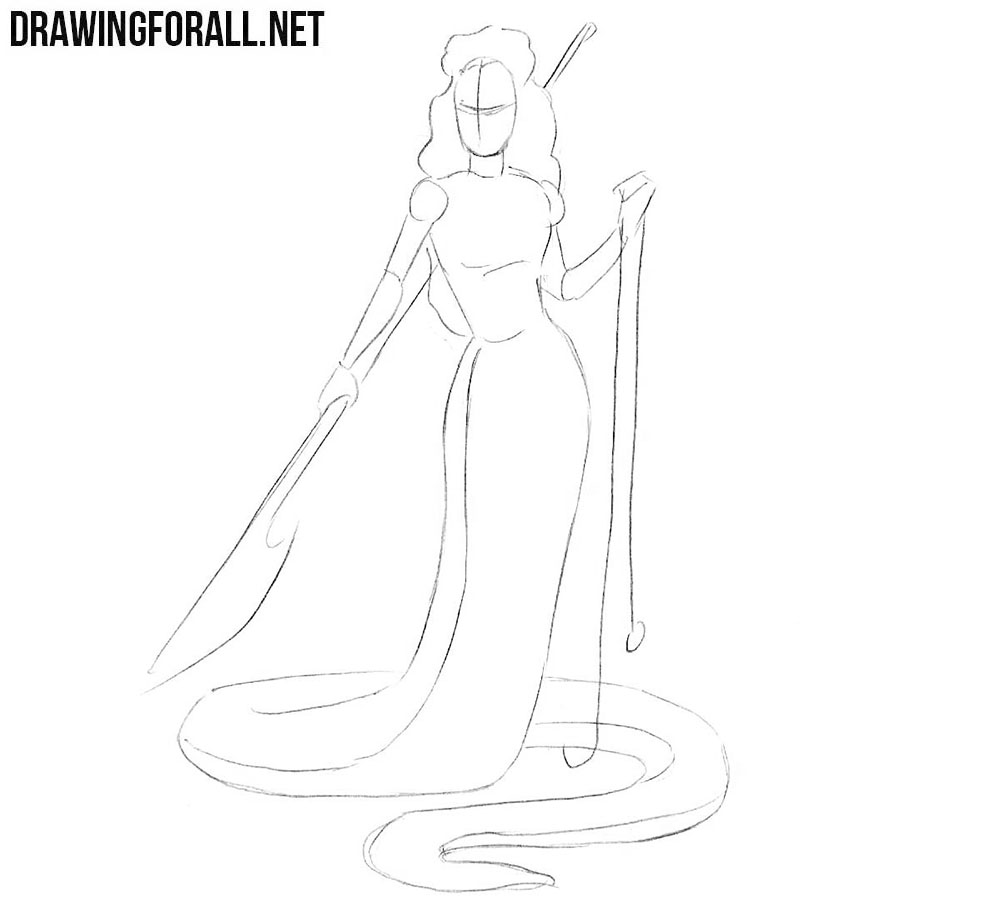 We begin to draw the final details with the help of clear and dark lines. Using the intersecting lines from our second step, draw out the eyes and eyebrows above the eyes. Next draw out the nose and lips. We finish this step by drawing lush hair. 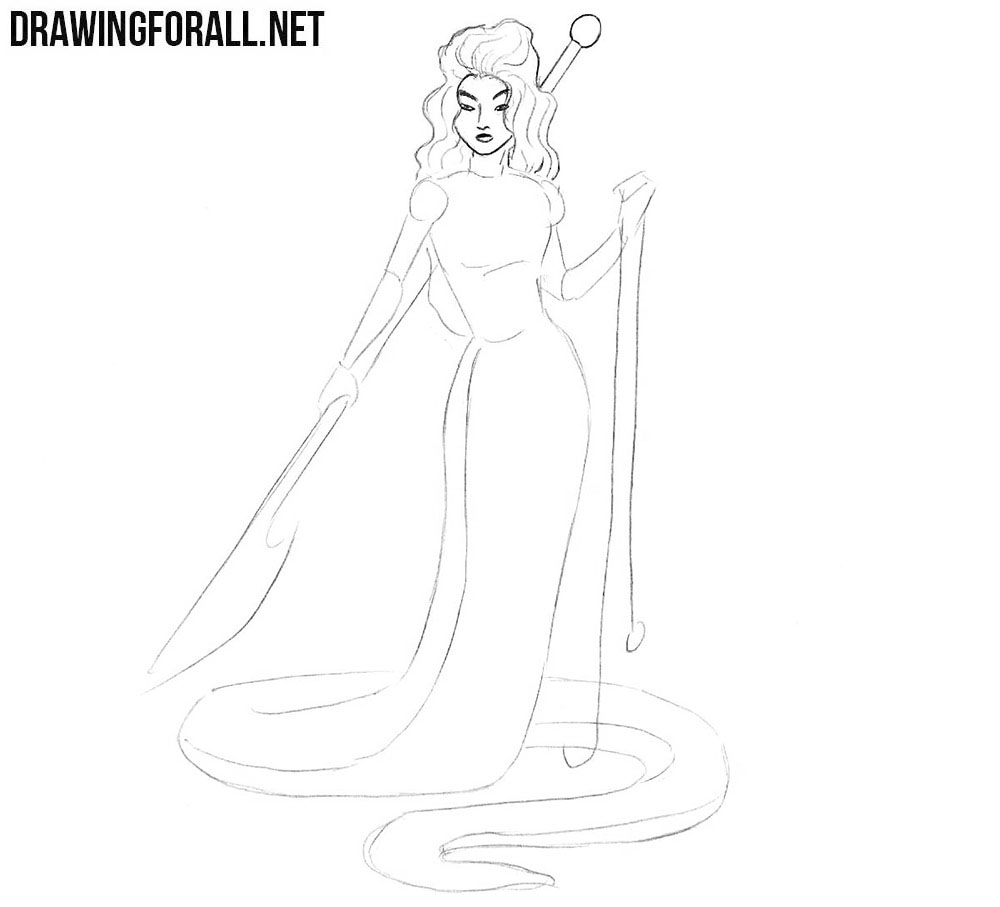 Let’s move a little lower and work with the torso of Echidna. Using clear and smooth lines, carefully draw out the shape of the torso and all the curves as shown in our example. Do not forget to erase unnecessary guidelines and draw the details of the costume. 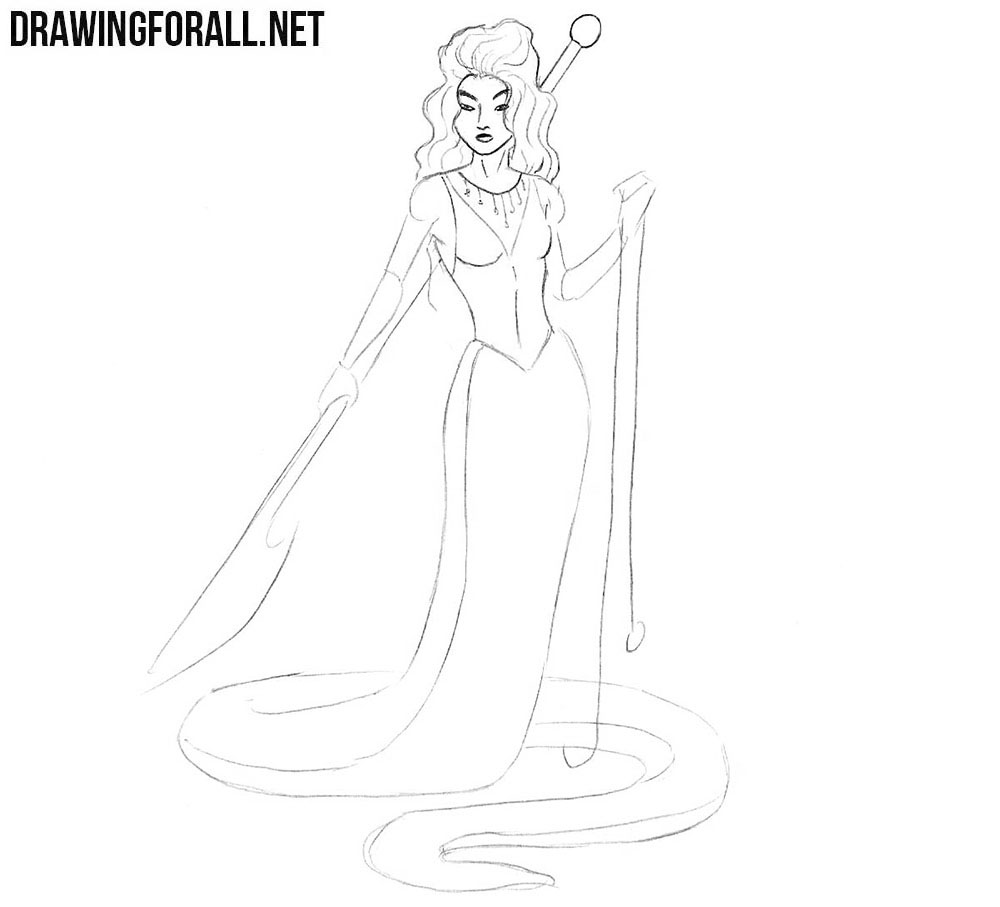 In this step we will draw arms. Draw out the outlines of thin arms and weapons in hands. At the end of the step draw out the decorations on the arms of Echidna. 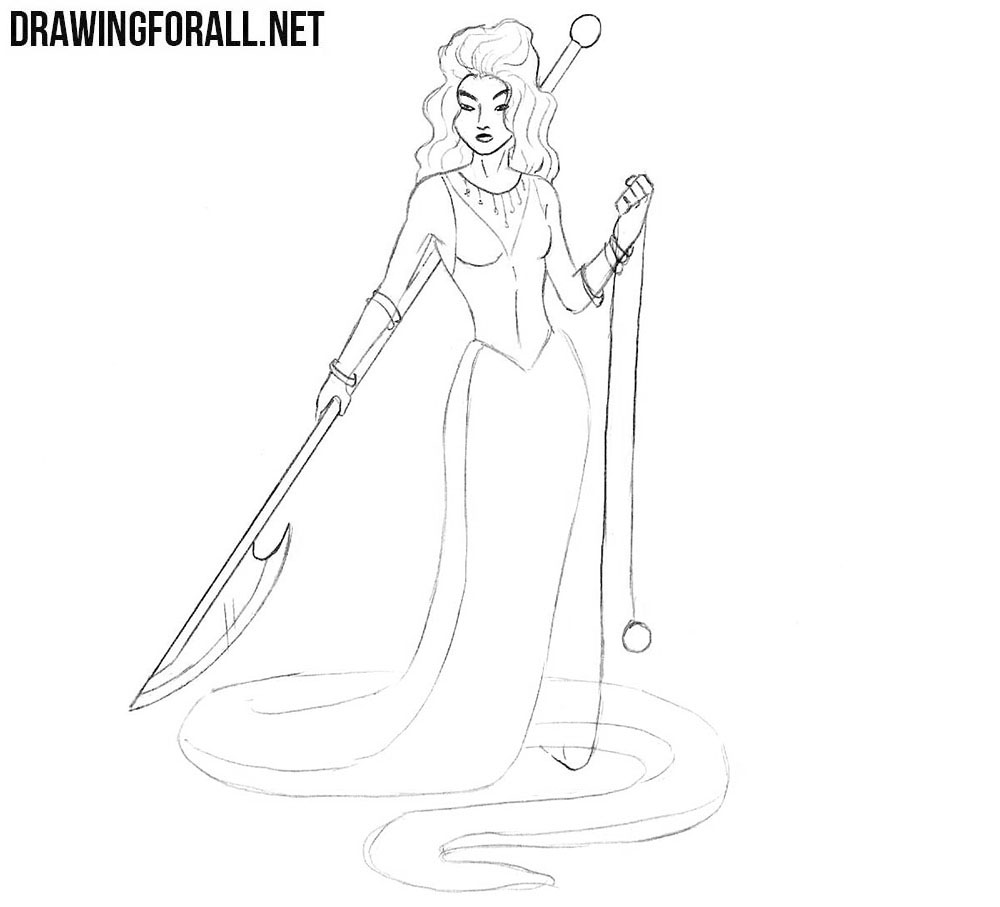 The simplest step of the lesson about how to draw Echidna. Here we just need to draw out the long snake tail with the help of smooth and dark lines and erase all the remaining guidelines from the picture. 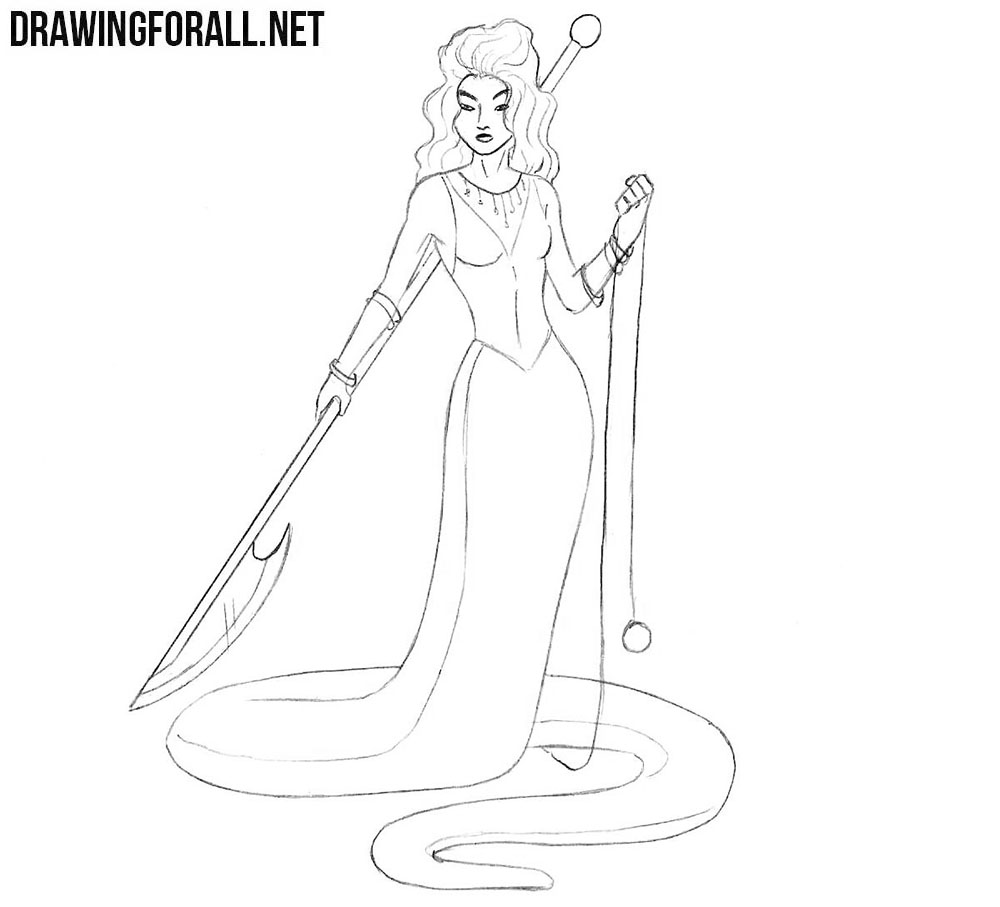 The drawing of Echidna is almost complete and it only remains for us to make it more realistic. Using conventional hatching, add shadows on unlit areas, as shown in our example.