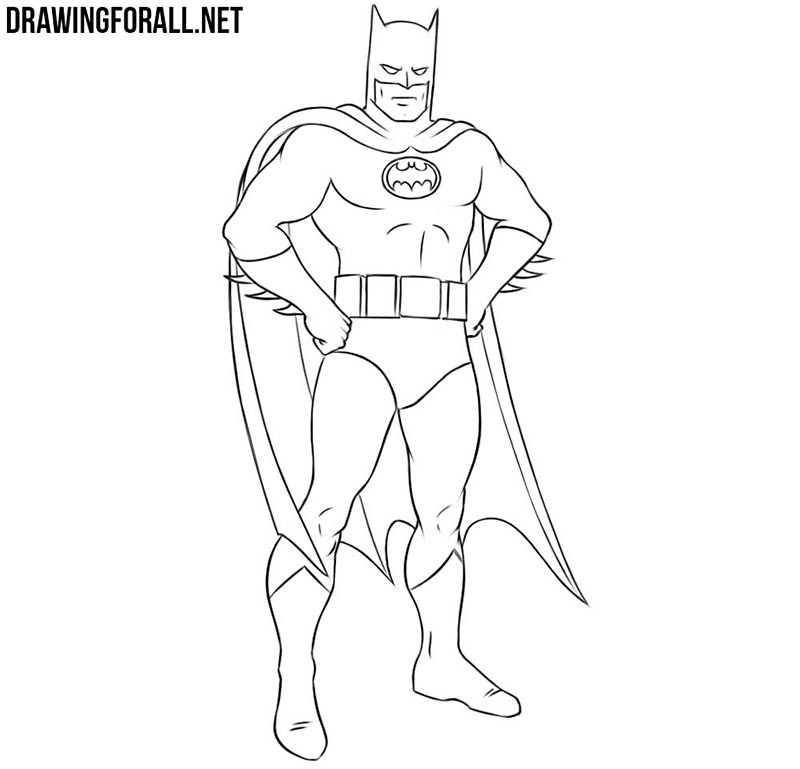 In order to properly draw Batman, the first thing we need to outline his skeleton. This stickman will help you to keep proportions and prevent mistakes in the process of drawing. Let’s start the sketch with the head that looks like an oval. Under it mark the spine with a wide chest and a comparative narrow pelvis. Finish sketching the skeleton of Batman drawing hands and feet with very simple lines. 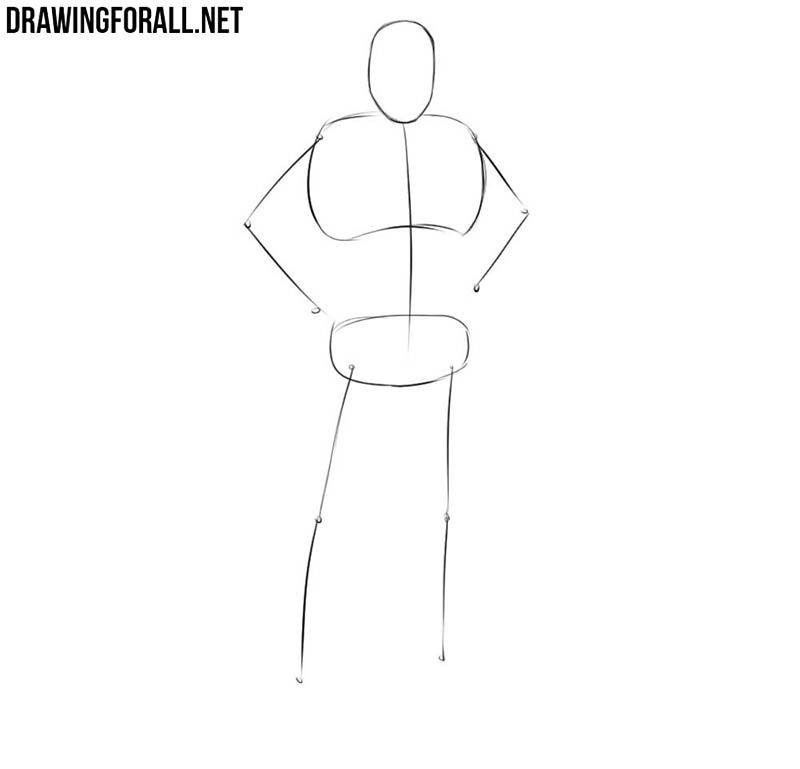 To properly depict the face of Bruce Wayne (by the way, we have a lesson about how to draw the Batman head) you will need to depict two simple lines intersecting in the center of the head. Now mark the wide and powerful neck in the form of a short cylinder and sketch the torso, which should taper at the waist. 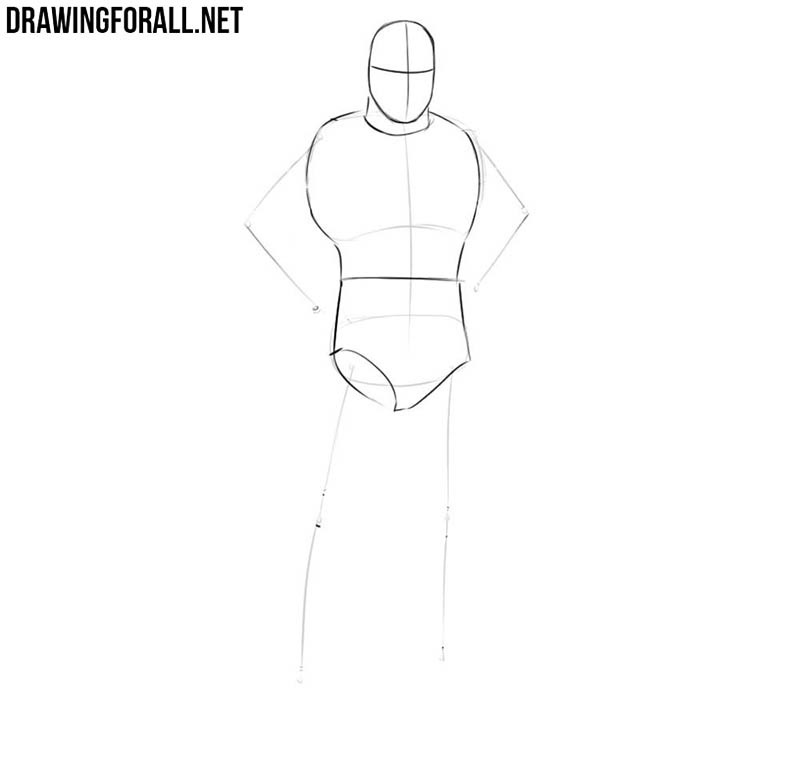 Now let’s add volume to the limbs of the mighty superhero. The deltoids, elbows and knees of Batman should be marked as simple balls, and the arms and legs should be sketched in the form of slightly modified cylinders. In the same step, with rough lines sketch out the hands clenched into fists and feet. 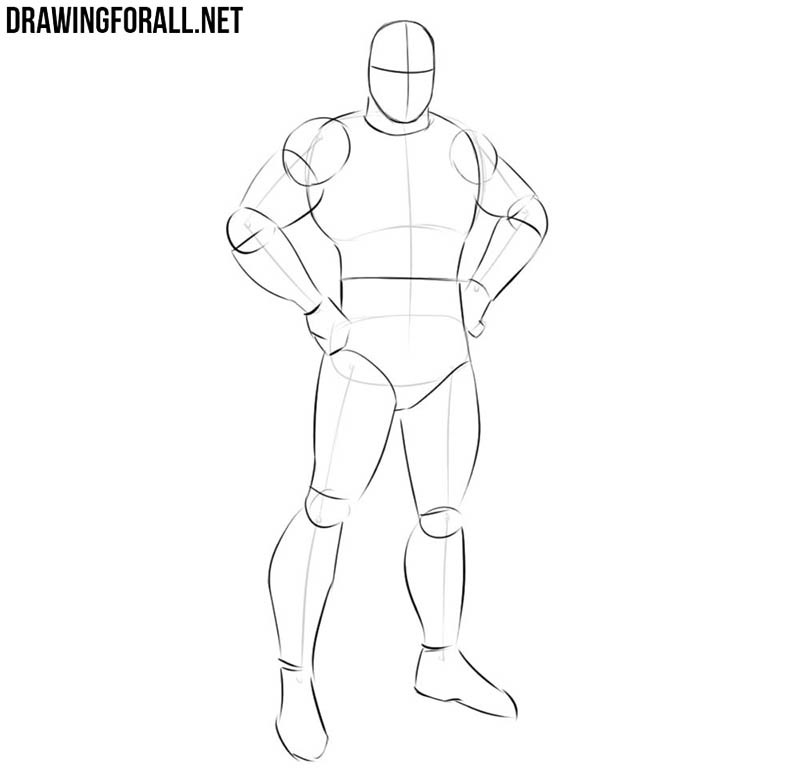 In the previous steps we were engaged in creating a kind of mannequin of the future Batman drawing. Starting from the fourth stage, we will begin to add the most basic details. So sketch out the eyes that are on the vertical line from the second step, then sketch the opening of the mask and the mouth. In the same step outline the characteristic horns and outlines of the logo on the chest. 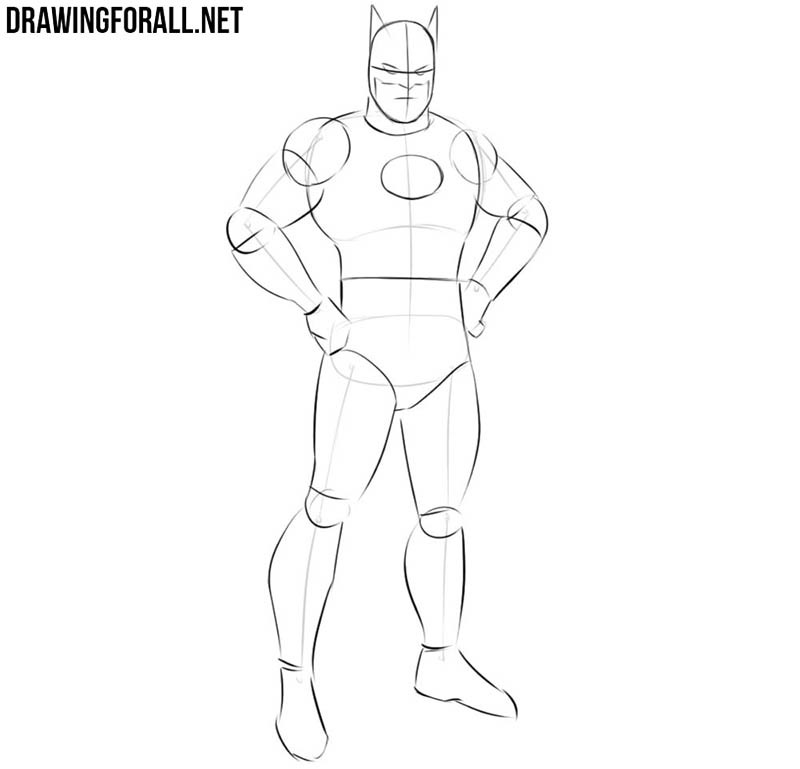 First of all, we need to outline one of the most characteristic details of the costume of Batman – his long cape with a characteristic lower edge. Next we depict the outlines of the boots, belt and gloves with spikes. Note that all the details in this and the previous steps are done using very light, almost invisible lines. 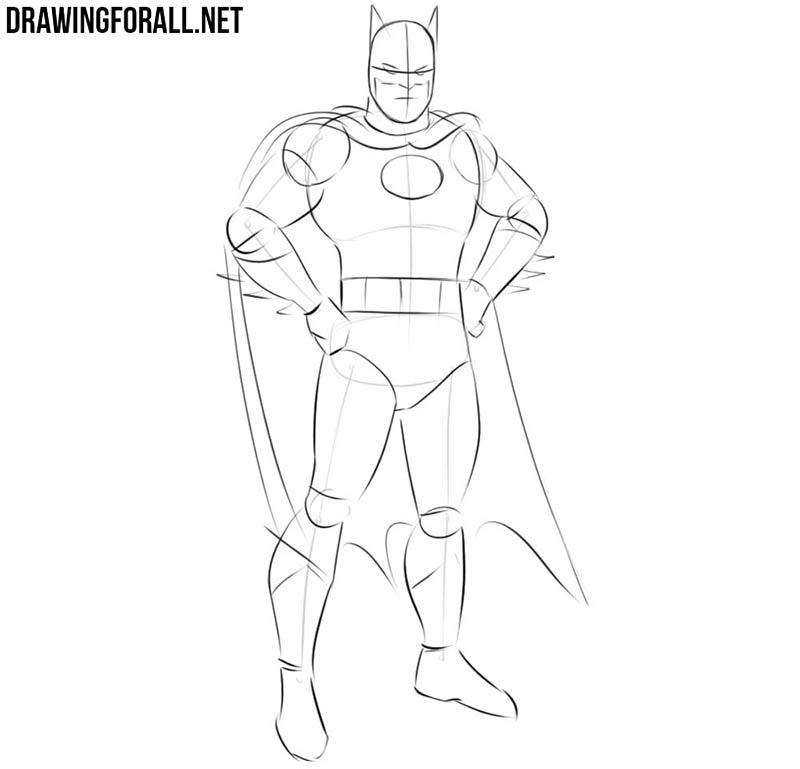 Starting with step number six, we dive into the final details. Here we will need to draw out the frowning eyes, sharp nose and the outlines of the famous mask. In the same step, we outline the mouth and draw the wrinkles on the face. Make Batman head cleaner by removing all unnecessary guidelines 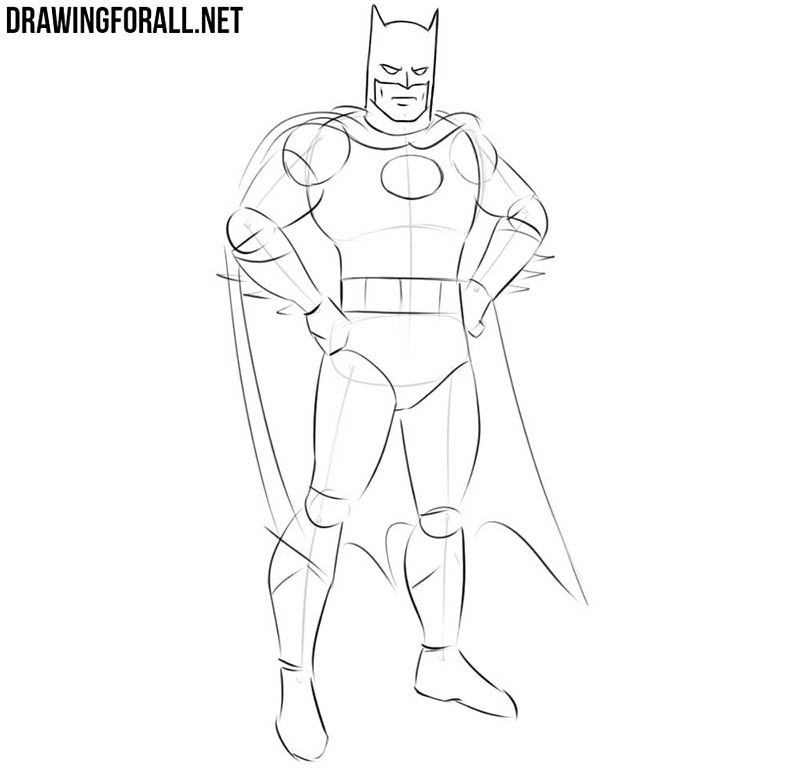 Now draw the Batman’s torso. Depict the outlines of the torso, draw powerful pectoral muscles and abs. In the center of the chest draw the Batman logo (to learn more about this, visit our lesson on how to draw Batman’s logo). At the end of the stage, draw the belt details and remove the unnecessary lines from the superhero’s torso. 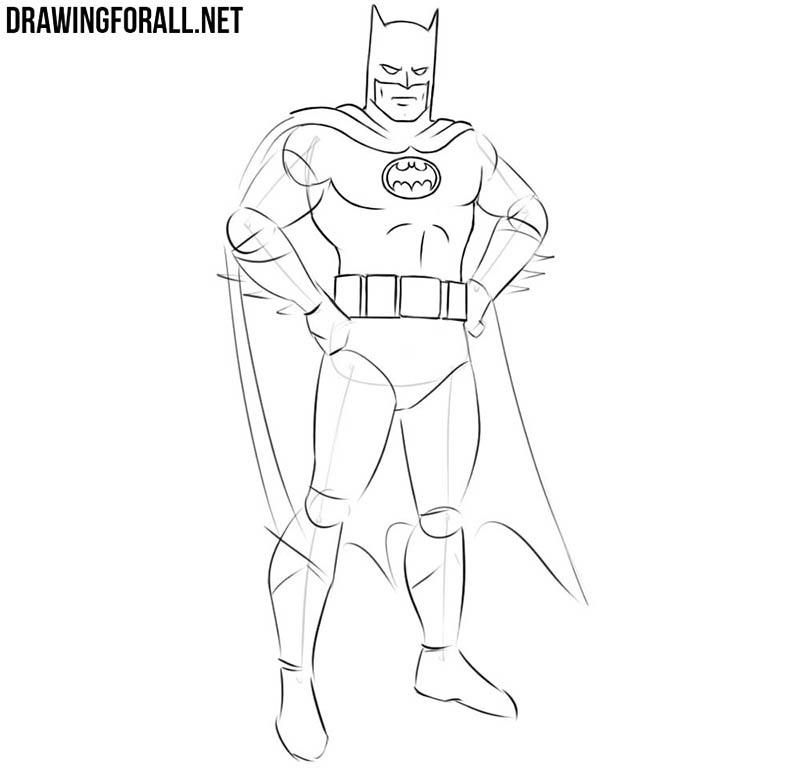 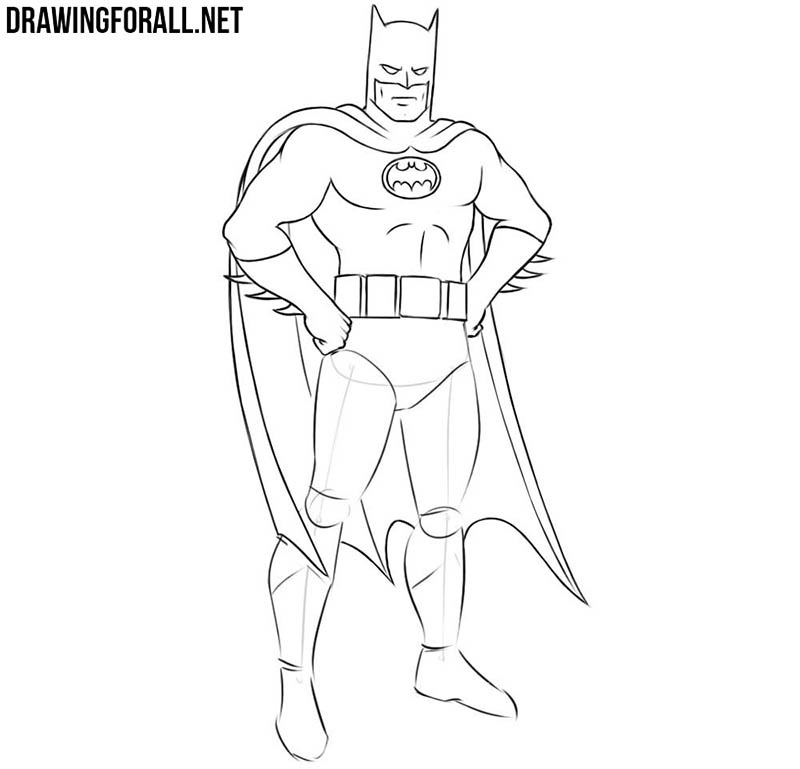 In the final step of the lesson on how to draw Batman easy, we will draw the legs. To do this, trace the outlines of the muscles, as shown in our example. Do not forget to draw the knees and lines of muscles, joints and folds on the shoes. Finish drawing Batman with an eraser, deleting any unwanted guidelines that remain.

So, this was a lesson on how to draw Batman easy. We tried to make the whole process as simple as possible, and even elementary, so that everyone could learn how to draw Batman. You can make your Batman drawing more difficult by adding shadows and some additional details.