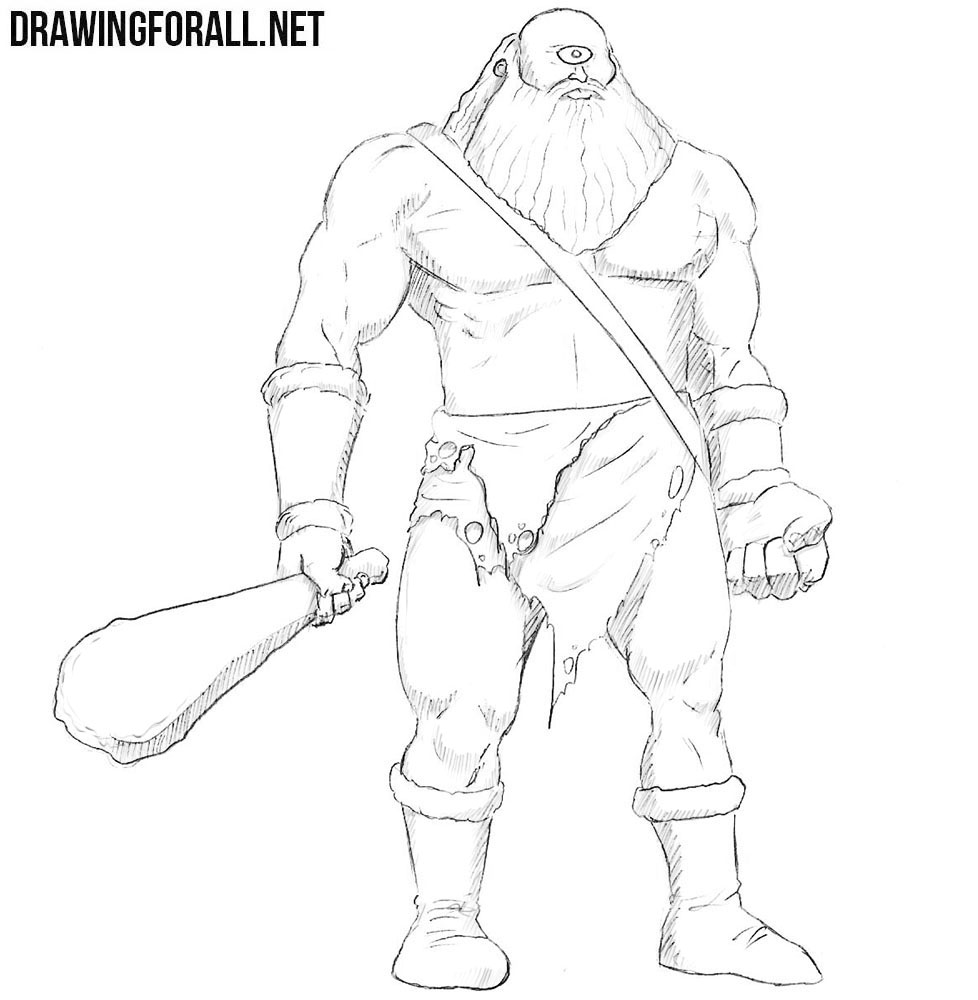 We are very fond of the characters from the myths of ancient Greece, and many of them are already drawn on our website. In this lesson we will show you how to draw a cyclops – one of the most famous characters of ancient Greek myths. In different versions of myths and legends, cyclops are represented in different ways, but they are always portrayed as one-eyed giants.

First of all, we need to draw a skeleton of a high and powerful character. Вraw the outline of a round head and spine. On the spine sketch out the chest and pelvis. With the help of simple lines, sketch the arms and legs. Note that the proportions of the cyclops differ slightly from the proportions of an ordinary person. 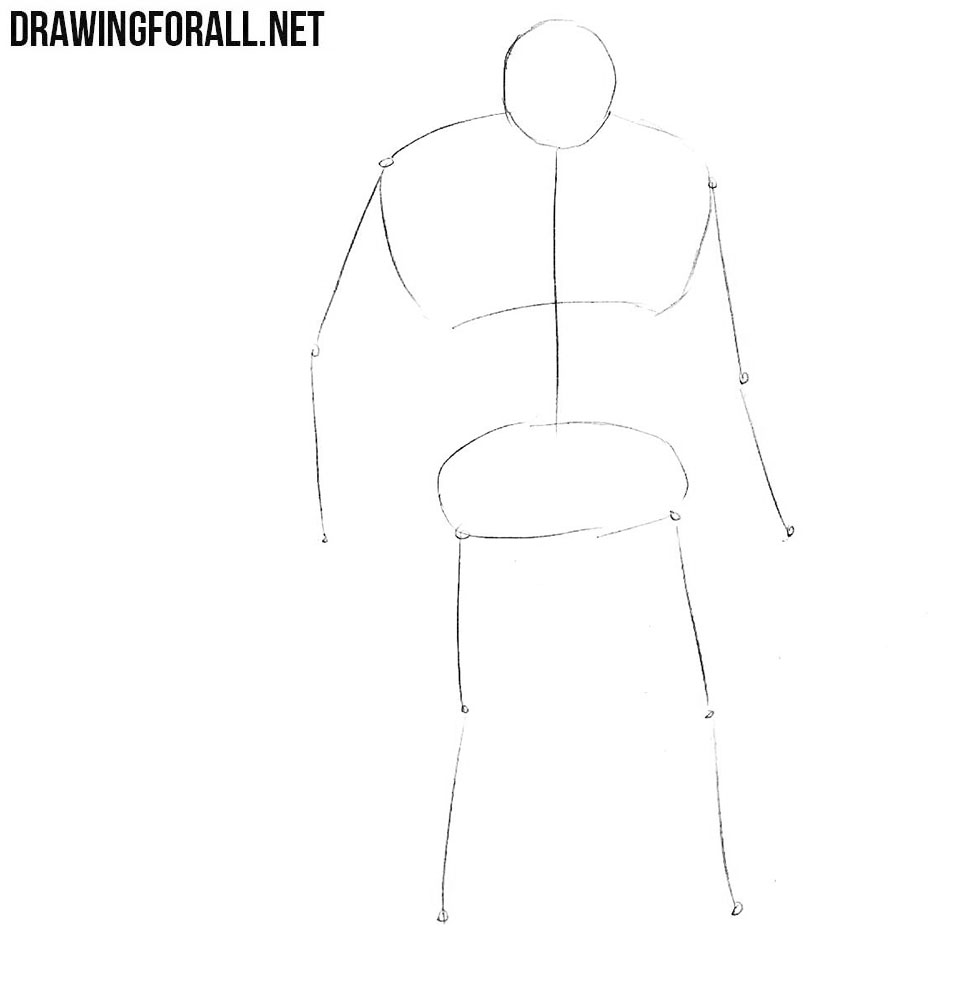 Sketch out the outlines of the wide torso, which slightly narrows in the waist. Next, using simple geometric figures, we sketch the arms and legs of the cyclops. In the same step sketch out a huge club in the hands of the character. By the way, we recall that in the first three steps we need to use very light lines, since in the future we will have to erase them. 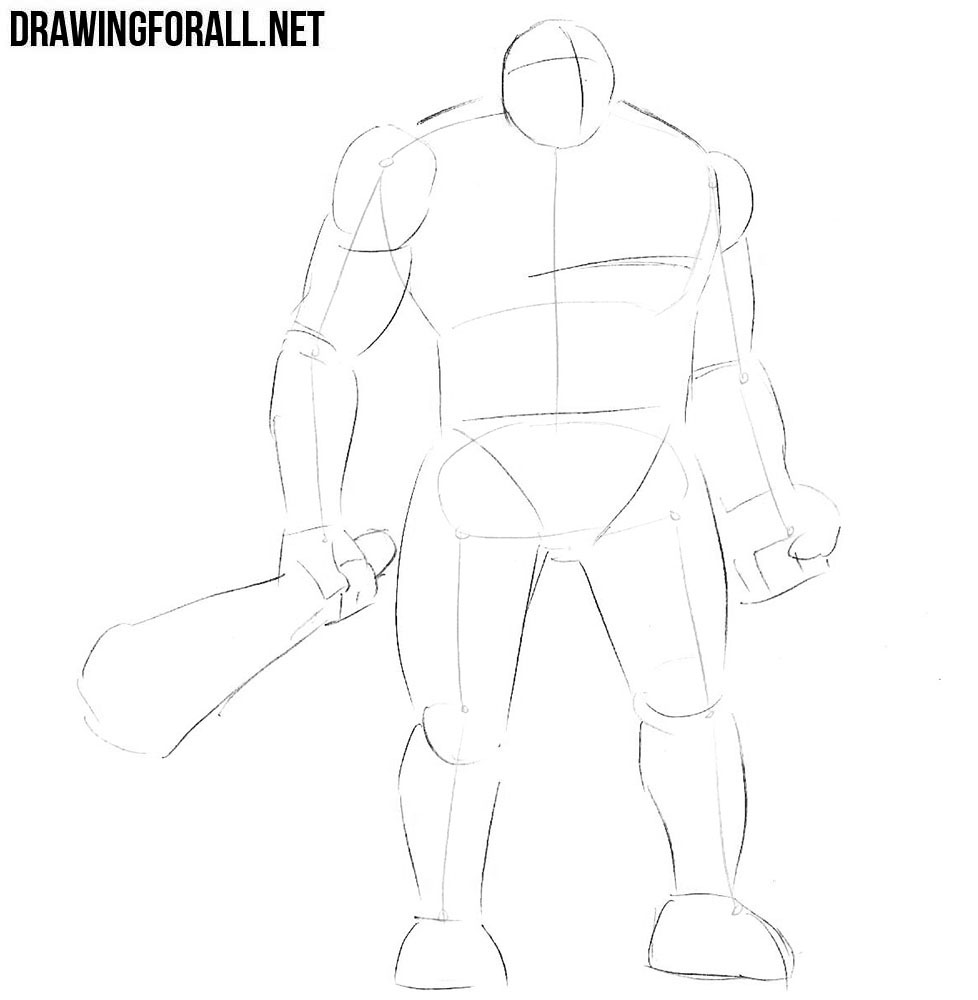 Now let’s add some details to our drawing. We start with the head and sketch the hair and beard. Notice that we drew a cyclops with a bald spot on the head. Now let’s sketch out the outlines of the strap on the torso, the loincloth, the bracers and the shoes. 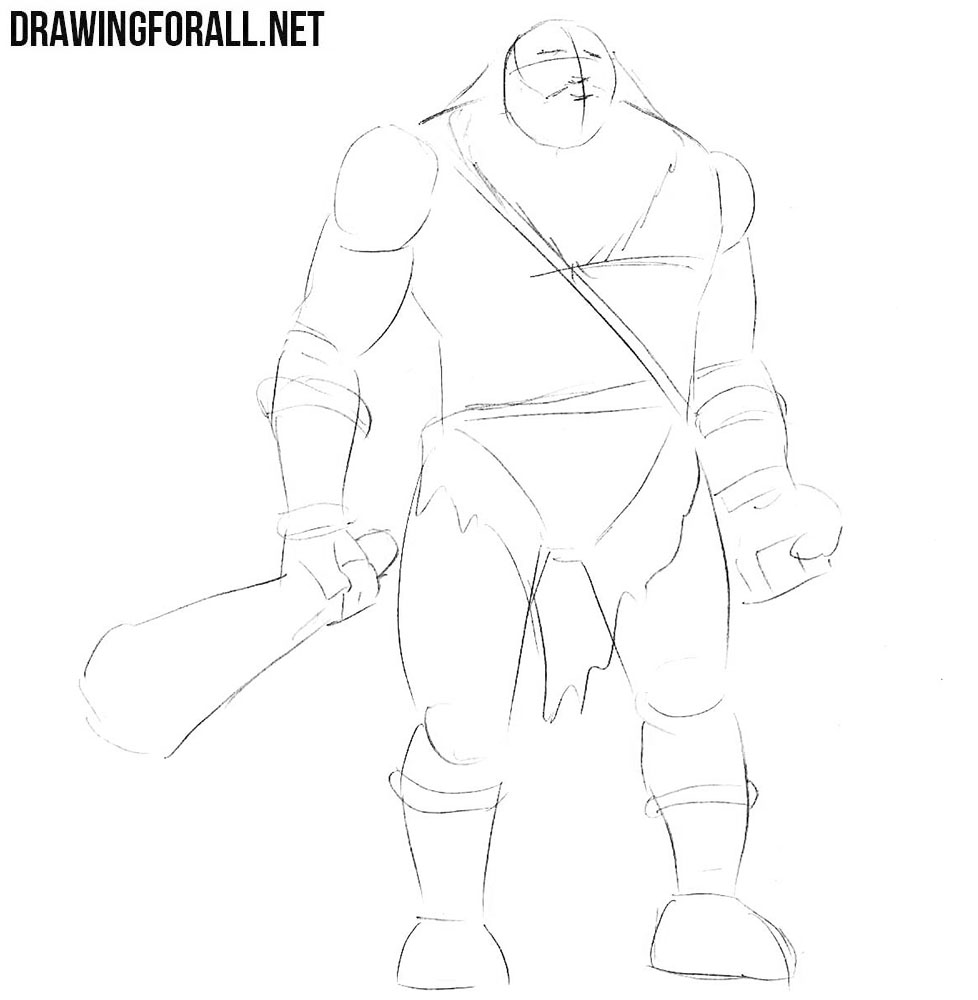 Starting with this step we will use clear and dark lines. First of all, draw out the outlines of the bald head, single eyes and nose. Sketch the wrinkles on the sides of the eye. 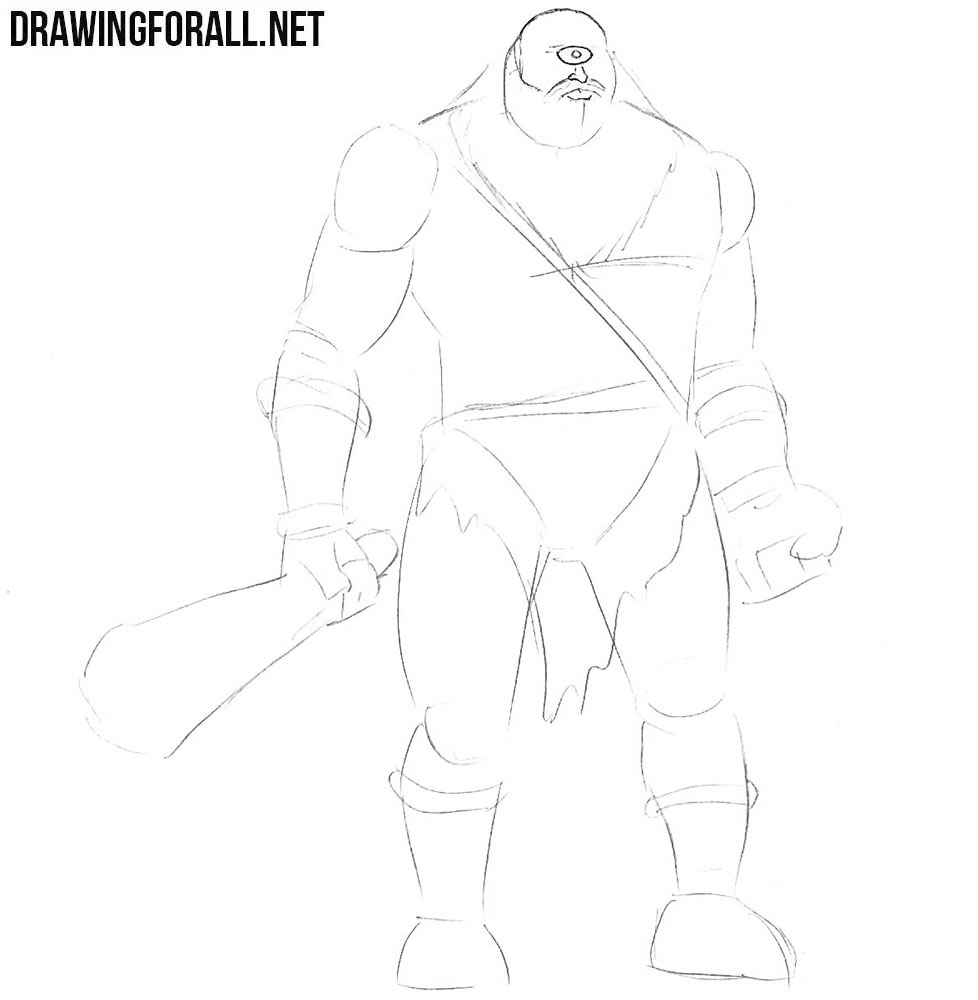 We continue to draw the head of our cyclops. Carefully draw out the outlines of the large beard, ear and long hair. Use long wavy lines to draw hair of the beard. Remove all unnecessary lines from the head of our character. 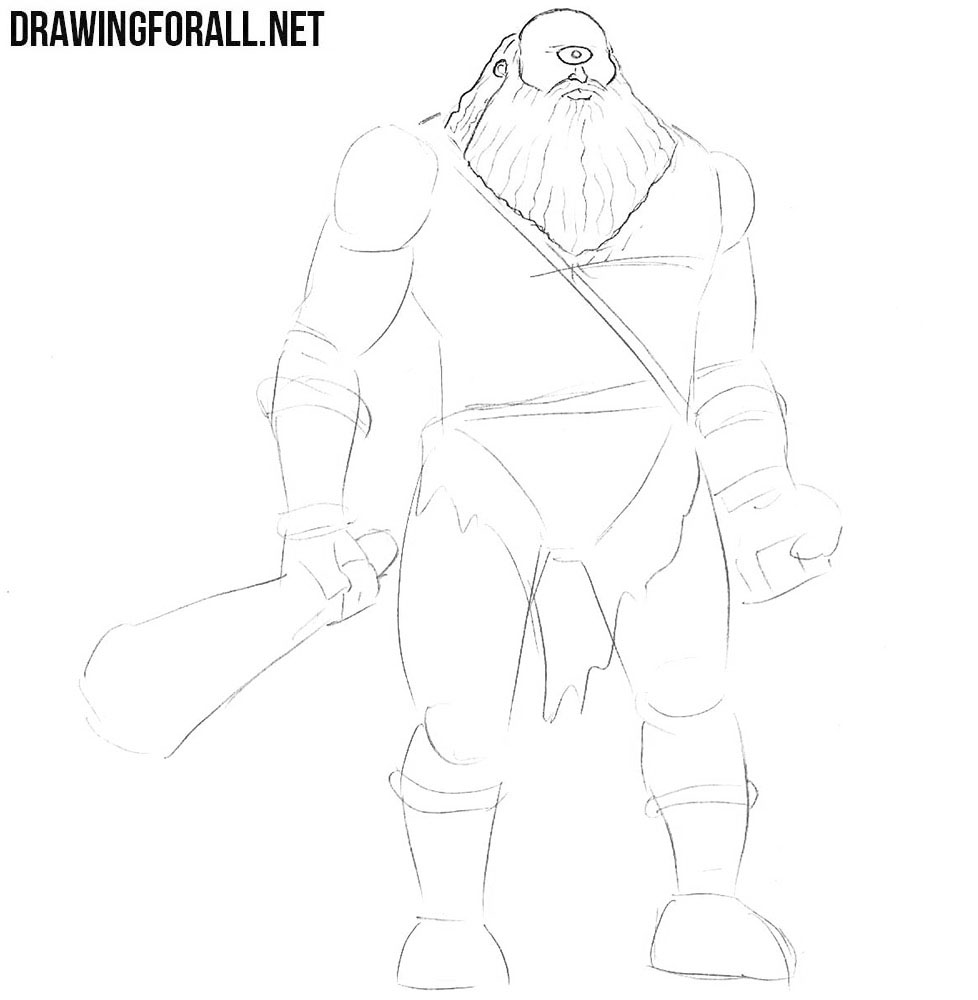 Now let’s move on to the torso. Here we draw the shoulders, huge pectoral muscles and the outlines of the torso. Do not forget to draw out the shape of the muscles on the torso as shown in our example. 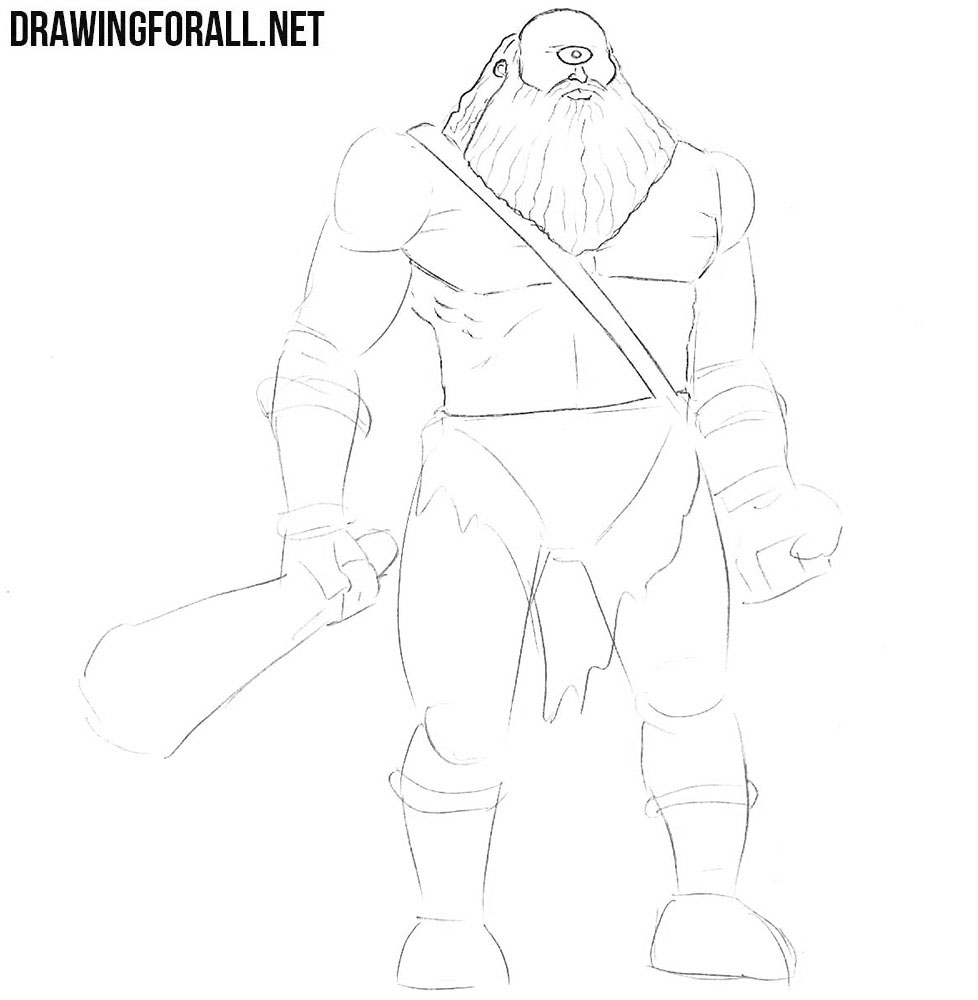 Let’s now move to the arms of the cyclops. Here we draw out huge muscular arms. Draw deltoids, round biceps, triceps and forearm muscles. Next, draw fur bracers and the club. 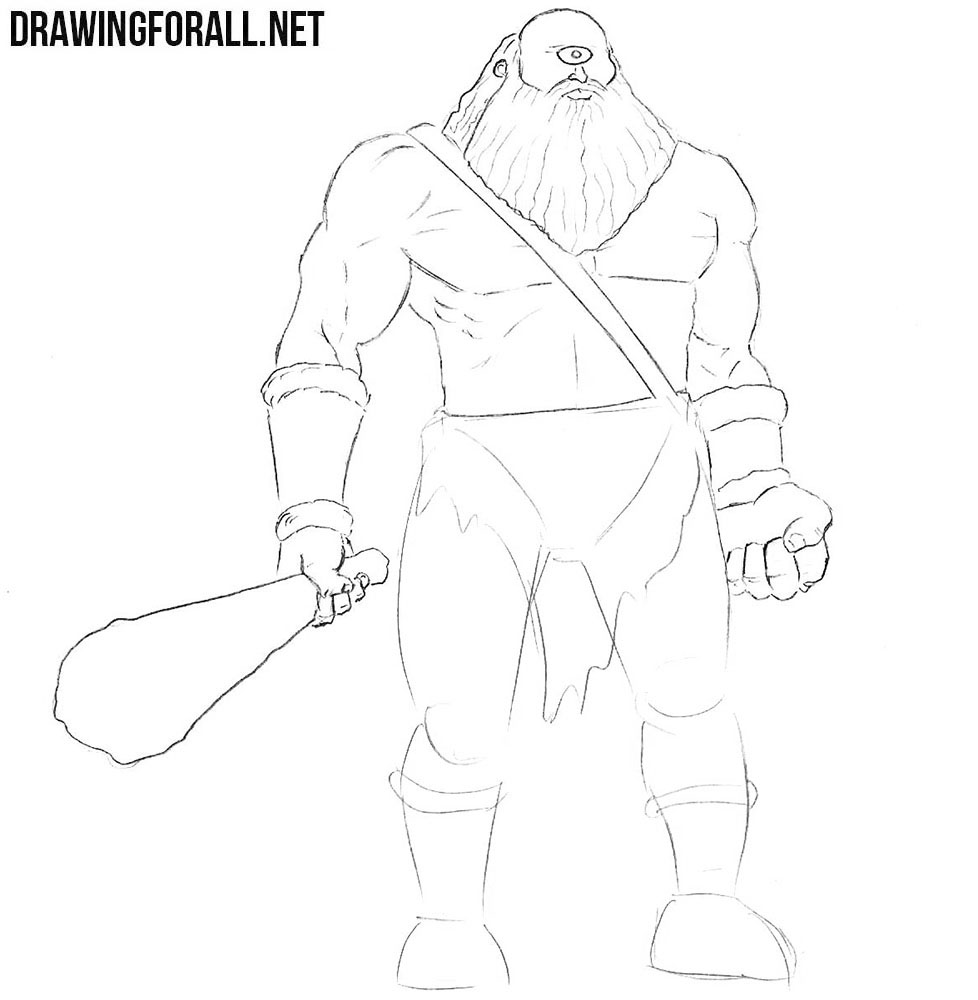 Now let’s draw the lower part of the body of the cyclops. Draw out the torn loincloth. Next, carefully draw out the outlines of the muscles of the legs, as shown in our example. Do not forget to draw knees and shoes of our character. 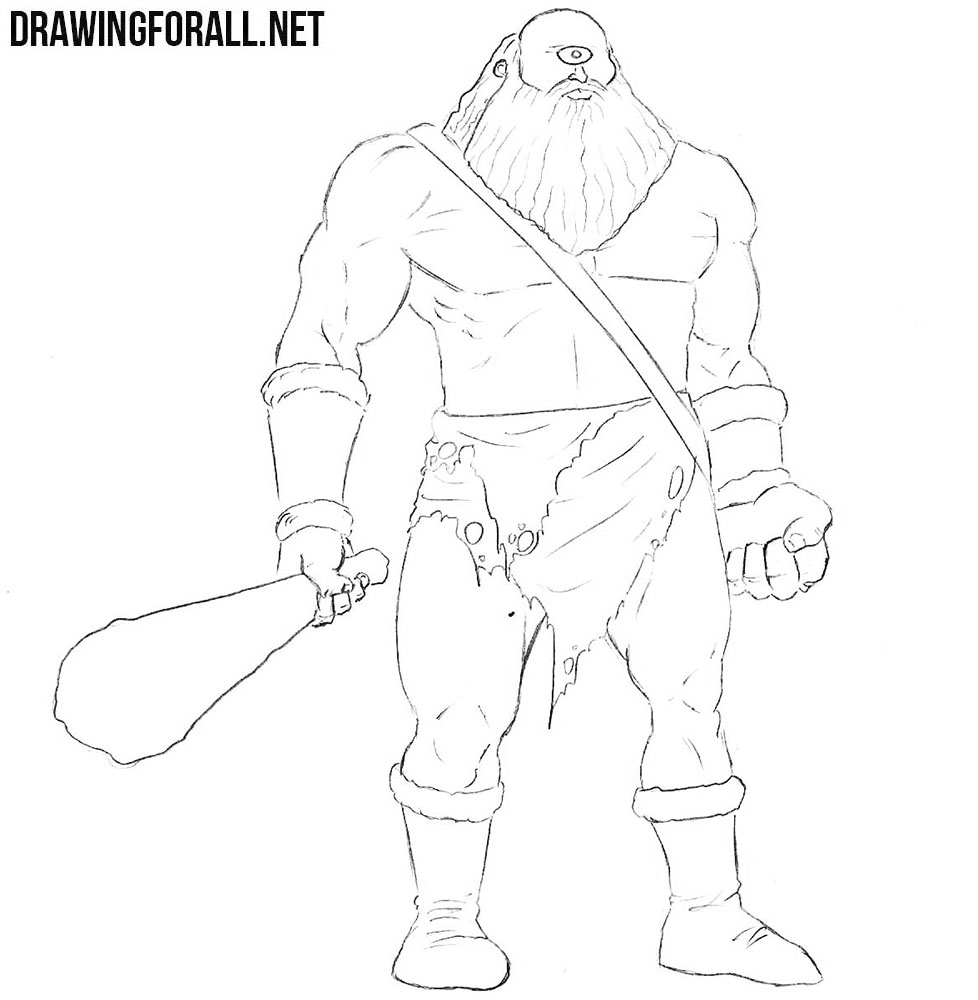 The drawing is almost complete, and we only need to add some shadows to make our character more voluminous. Using dense hatching, add shadows as shown in our example. In order for shadows to be more realistic, change the density of the hatching depending on the darkness of the shadows.

In this lesson we showed you how to draw a cyclops – one-eyed giant from ancient Greek myths. In different works these creatures are drawn in different ways, so we decided to draw a collective image of a cyclops.