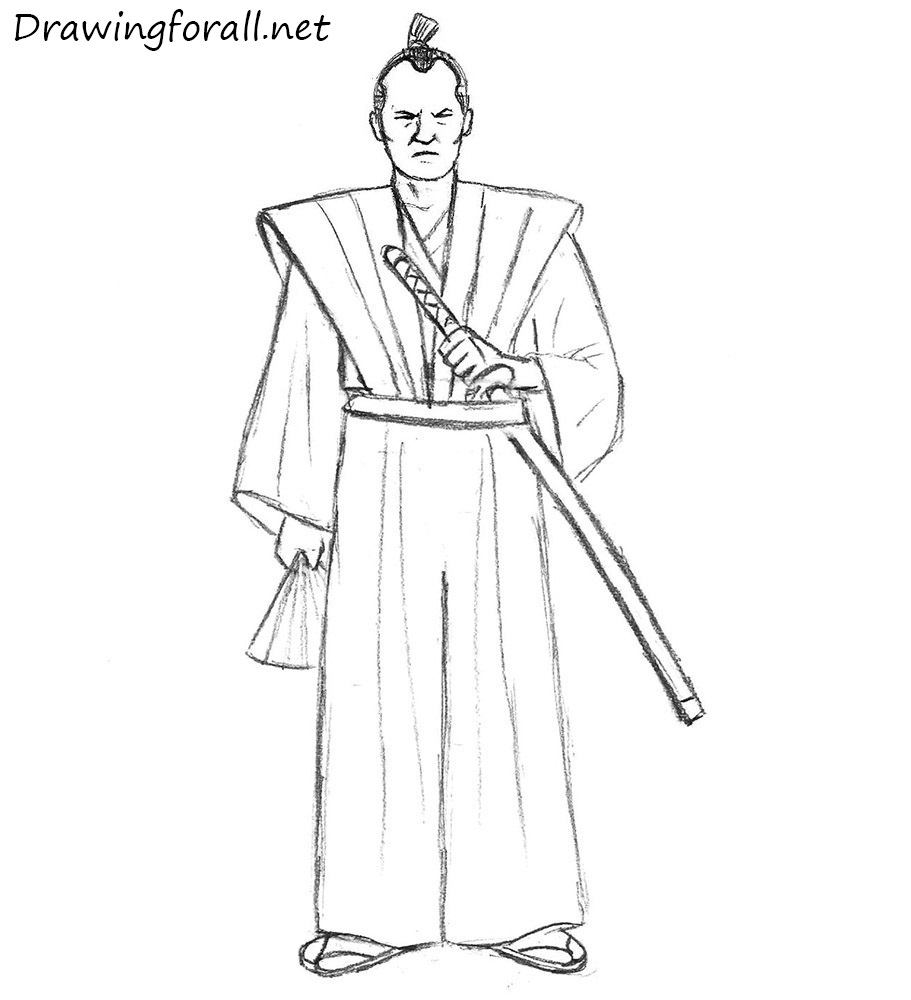 Hello! Today we have prepared a simple drawing lesson, in which we will show you how to draw a samurai for beginners. Samurai – the medieval Japanese warriors, who fought for the interests of his master until the last drop of blood.

Samurai were incredibly brave, before each battle, they were ready to die – this selfless anger and willingness to die for their ideals instilled terror into the hearts of their enemies. Besides each warrior, in fact, was a wise and discreet man.

It should be noted that today we present to you not first drawing lesson about samurai on our website. We have already told you about this medieval warrior, but that lesson was very complex. But today’s drawing lesson will be much easier.

Static posture is very useful for the study of proportions, so it will be very easy to draw a stikman. Growth of men equal to the sum of the lengths of its seven heads.

Shoulders for men is much wider waist (in women’s figure these two lines are about the same size). The head should be in the shape of an oval. The body (skeleton of samurai) is made of straight lines. The places of bends mark using short strokes. 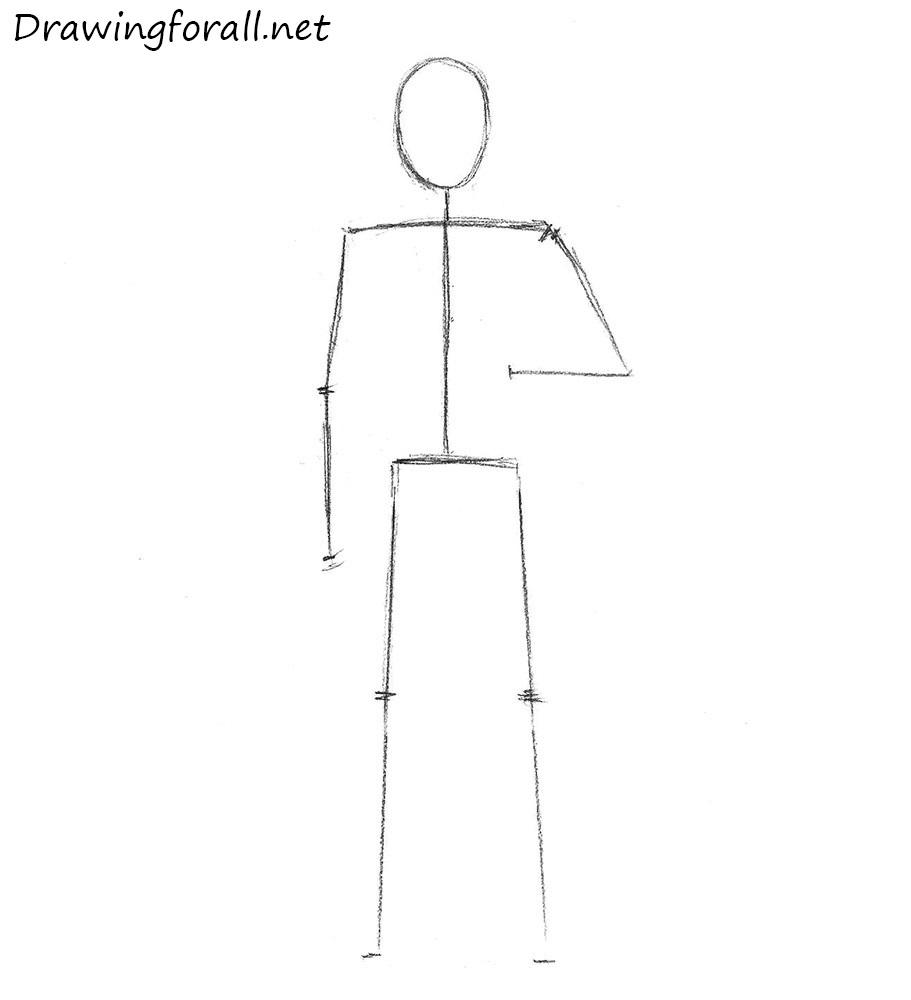 Let’s give some volume to the samurai. But first draw the lines of the facial symmetry, that will help us to draw facial features. Under head draw the neck – a short cylinder. Then draw the torso, in the shape of tapering down cylinder. Draw the arms – let each of them consists of five parts:

But the legs, as well as the entire lower part of the body, should take the form of figure that expanding in the direction of a top-down. At the bottom of the legs do not forget to outline silhouettes of feet. A little advice – the lines of this step should be drawn by very light pressing on the pencil, so that later they can be erased. 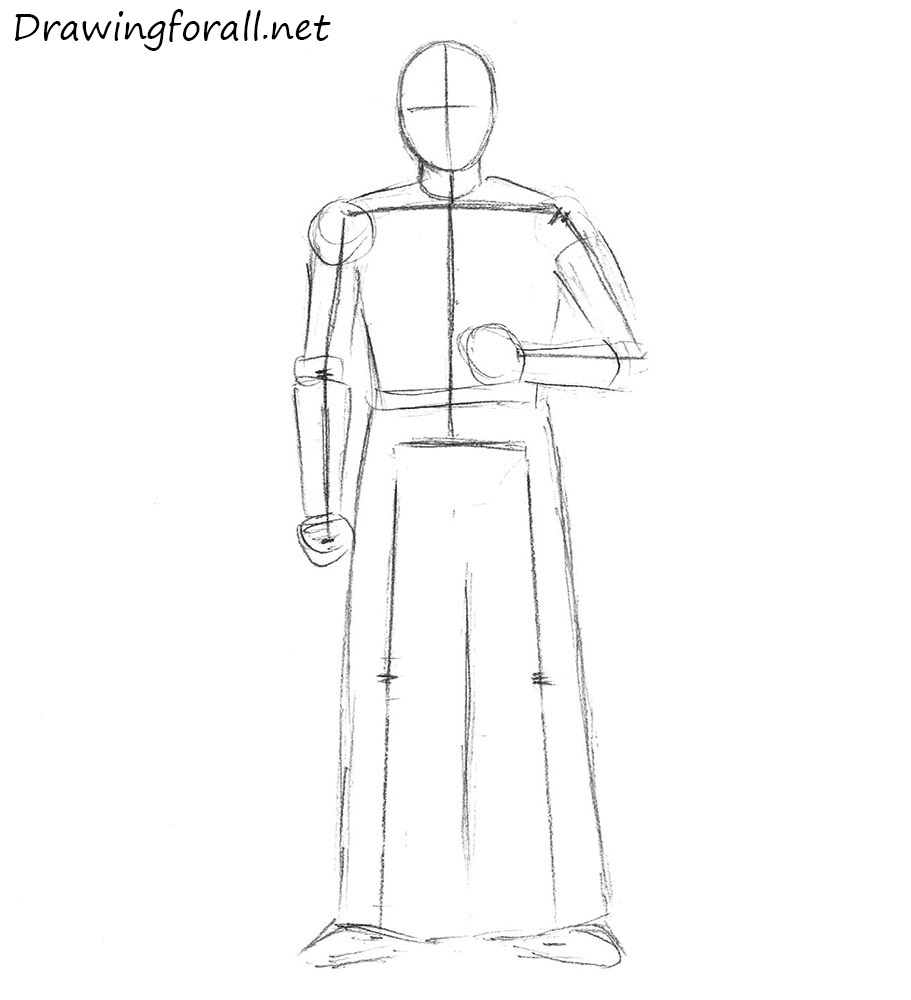 Using the guidelines from the previous steps we draw the face of the samurai. Since our current drawing lesson generally uncomplicated, the facial features also will be pretty easy to draw. At first we draw the haircut – draw the contours of hair and then draw the hair lines. Using simple curved lines draw the eyes and eyebrows.

Add some wrinkles below the eyes. The nose and mouth should also be drawn with simple lines. Do not forget to mark the nasolabial folds and rounded lines in the area of ​​the cheeks. 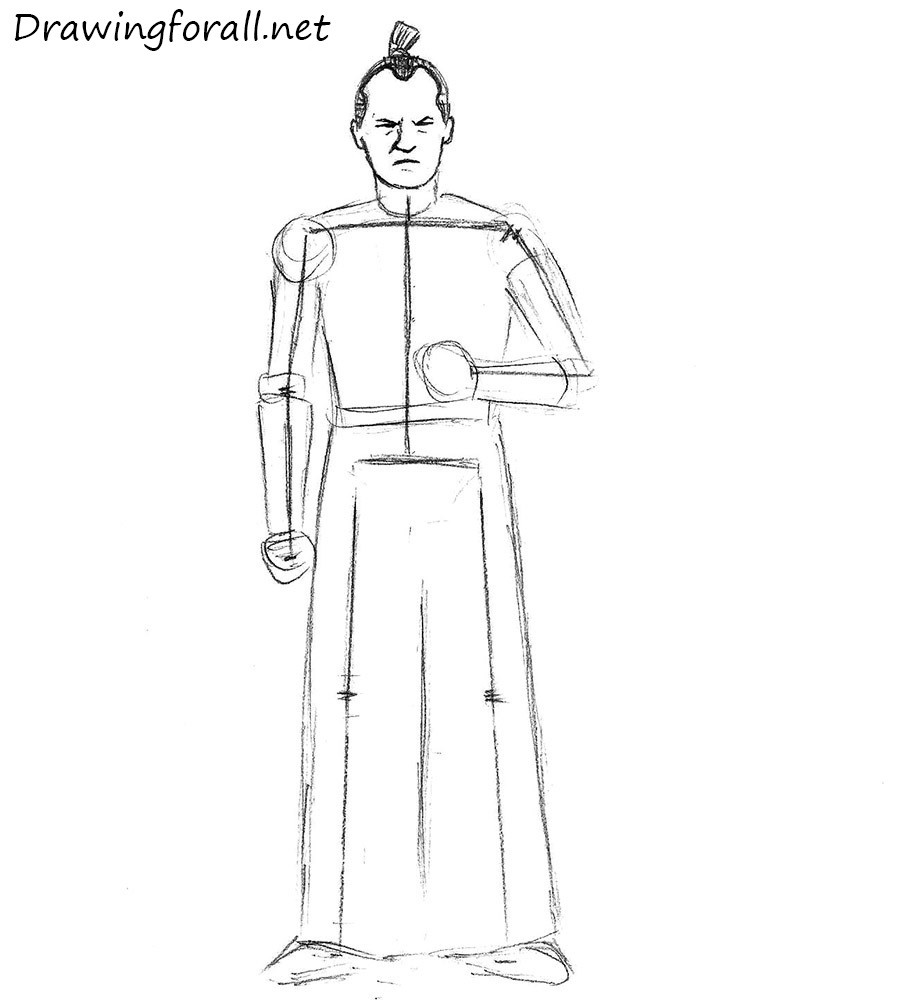 By the way, familiar to everybody ninjas Scorpion, Sub-Zero and Reptile were dressed in similar clothing. In the same step outline belt and a long samurai sword, katana, hidden in a sheath. 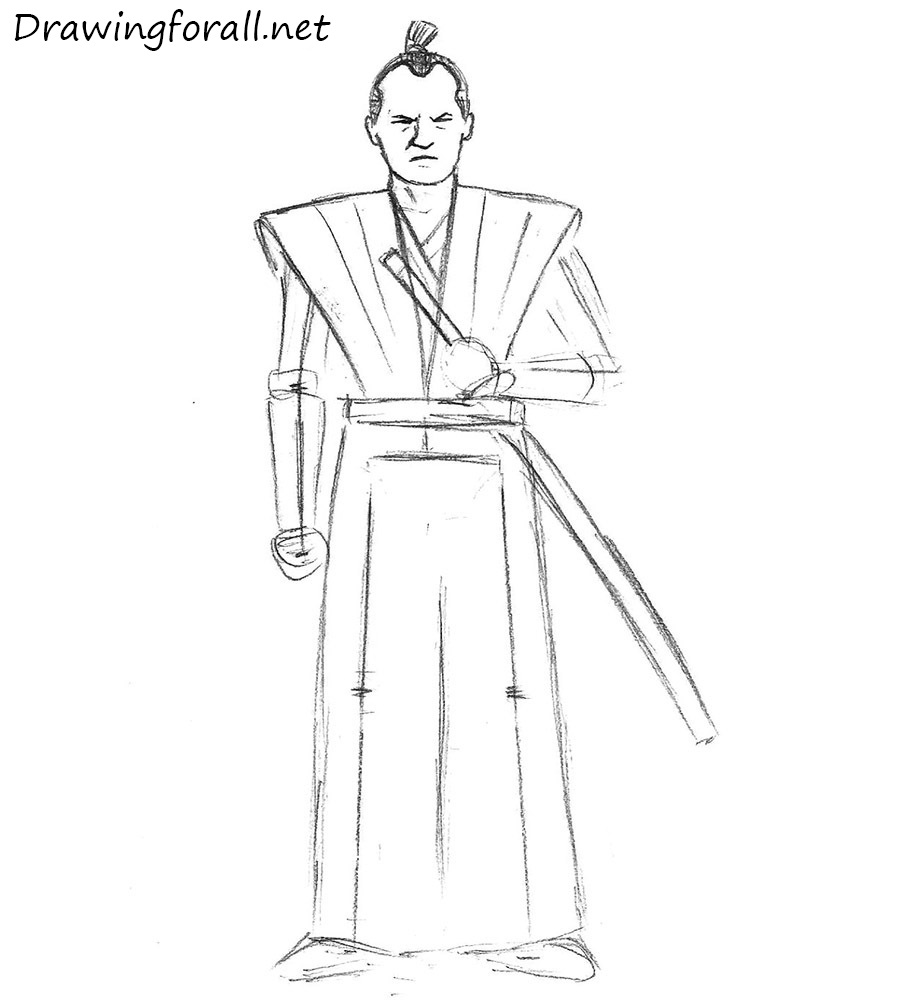 Continue to draw the samurai for beginners. Draw a wide, spacious sleeve  which is under haori. Erase the extra guidelines indicating the structure of the arm. Circle the contours of arm and draw the fan. 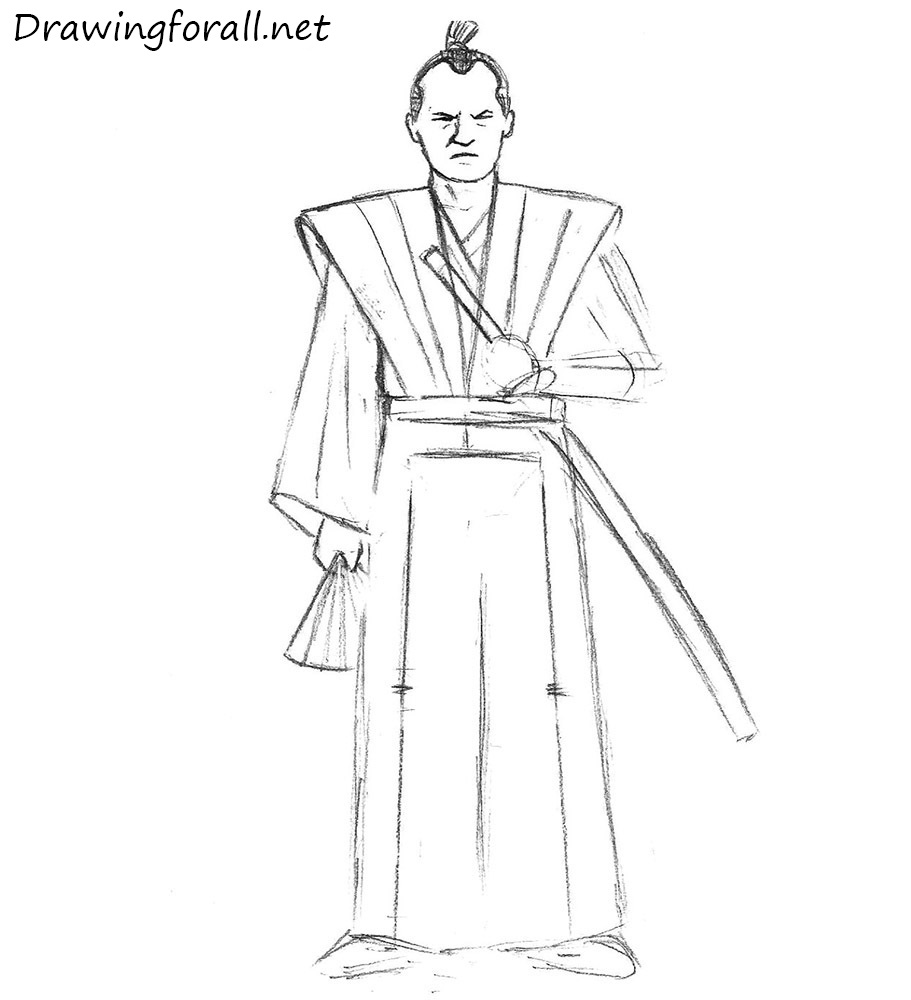 Draw the contours of the right sleeve from us and erase the unnecessary lines. Draw the visible inside of the sleeve and a few folds, having the form of the usual straight lines. Draw the pattern on the handle of the sword and the hand that is tightly holds the hilt. 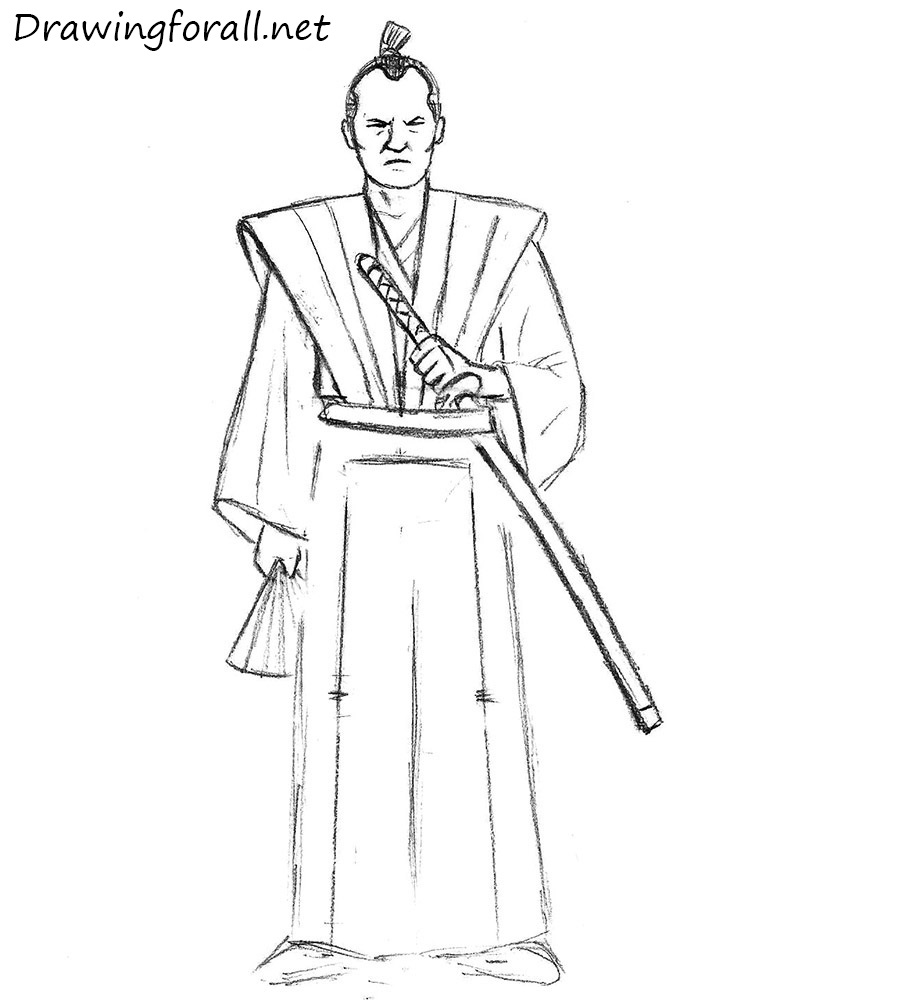 So in fact we just need to outline the contours of the trousers, erase the guidelines and add vertical lines which indicate folds. Also draw the waraji – a Japanese woven shoes, reminiscent in shape slippers. 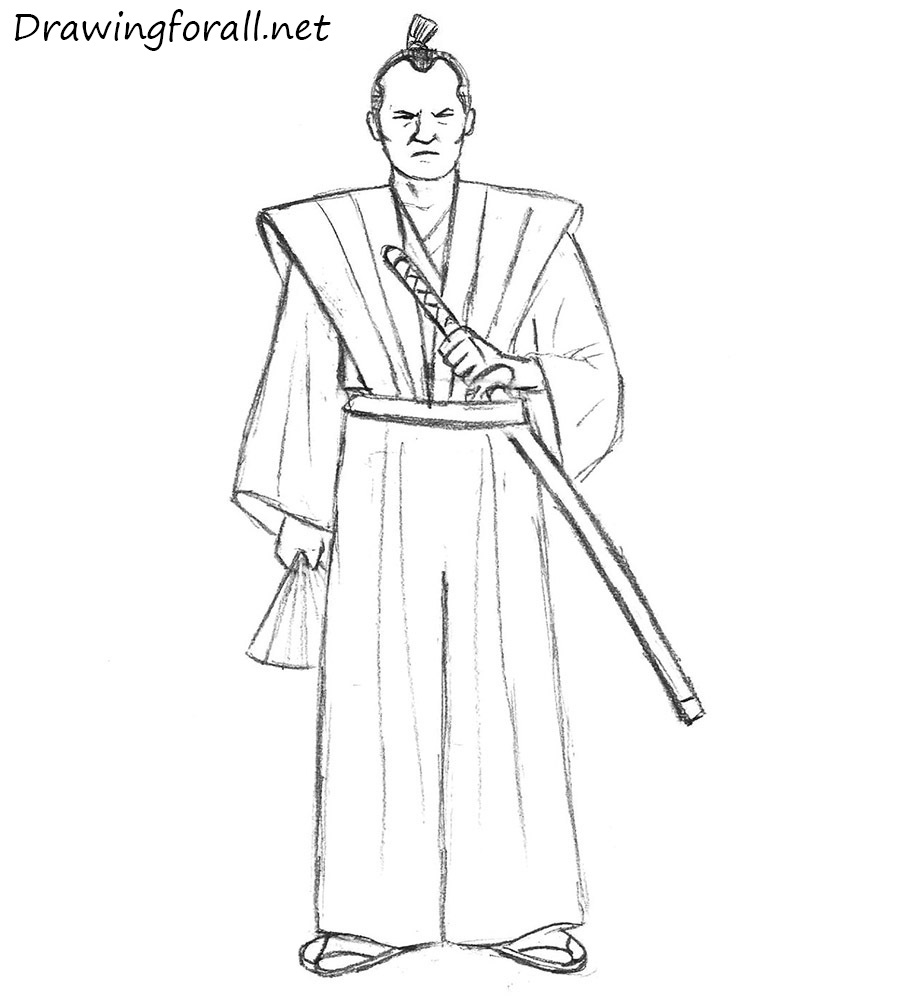