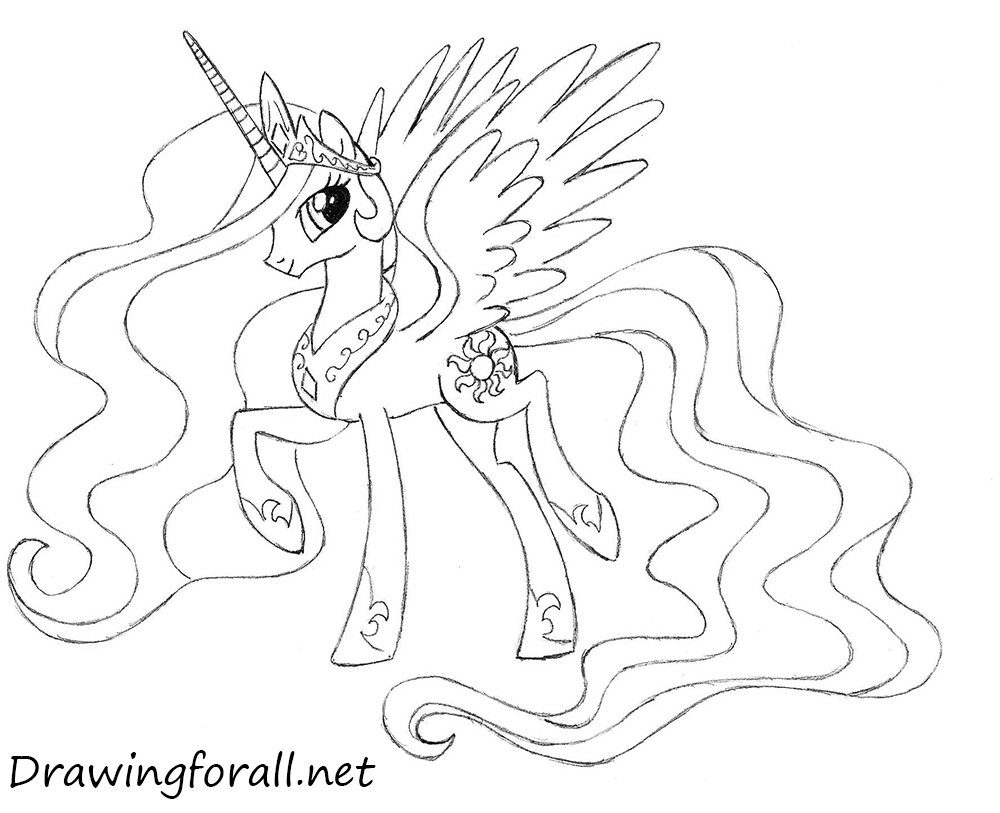 Hello! Today we’ll show you how to draw princess Celestia from My Little Pony, the character of the animated series «my little pony». Celestia is one of the most beloved heroines of the series around the world.She is a good and wise ruler, and loyal friend and mentor to pony Twilight Sparkle. Let’s start our drawing lesson dedicated to Princess Celestia!

On our site are all, even the most intricate pencil drawing lessons start with simple steps. Today’s lesson will be no exception, we begin to draw our Princess Celestia with two very simple pieces that will eventually be the head and torso.

The upper figure is rounded and slightly similar to an inverted drop, and the bottom figure looks like the beans well, or a minion from the cartoon “Despicable Me,” which is in a horizontal position. 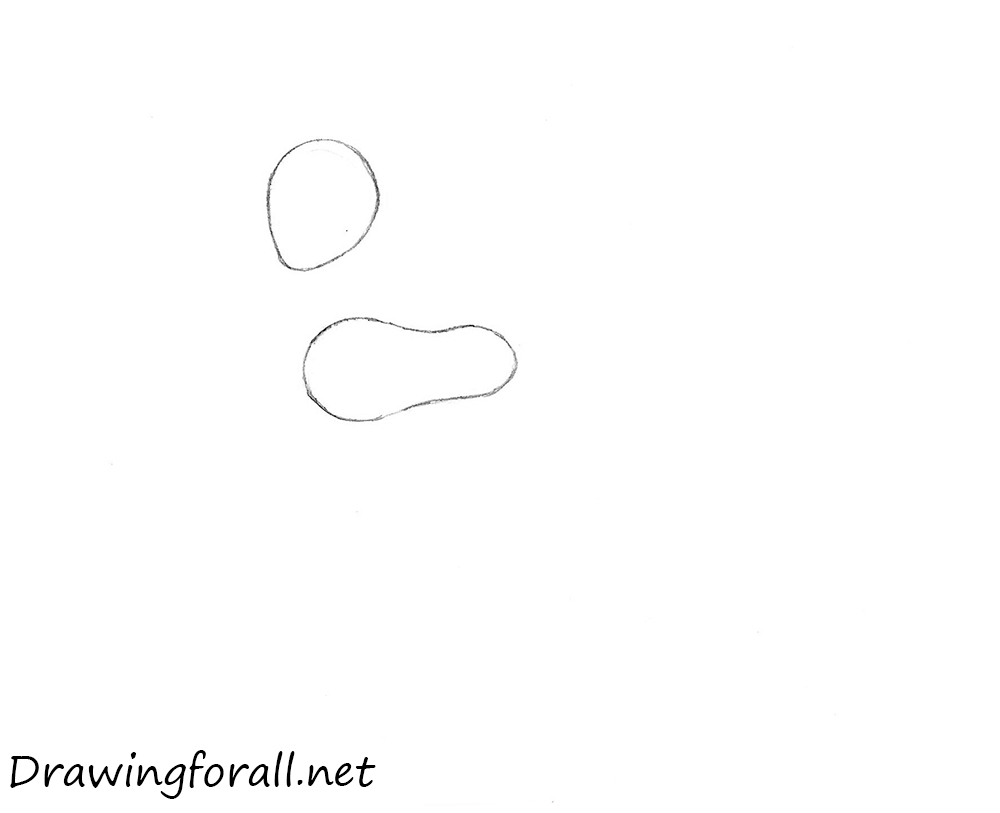 Connect these the two figures, drawn in the last step, using two almost parallel lines (the one closer to the tail almost straight, and that which is closer to the face, has a smooth bend). 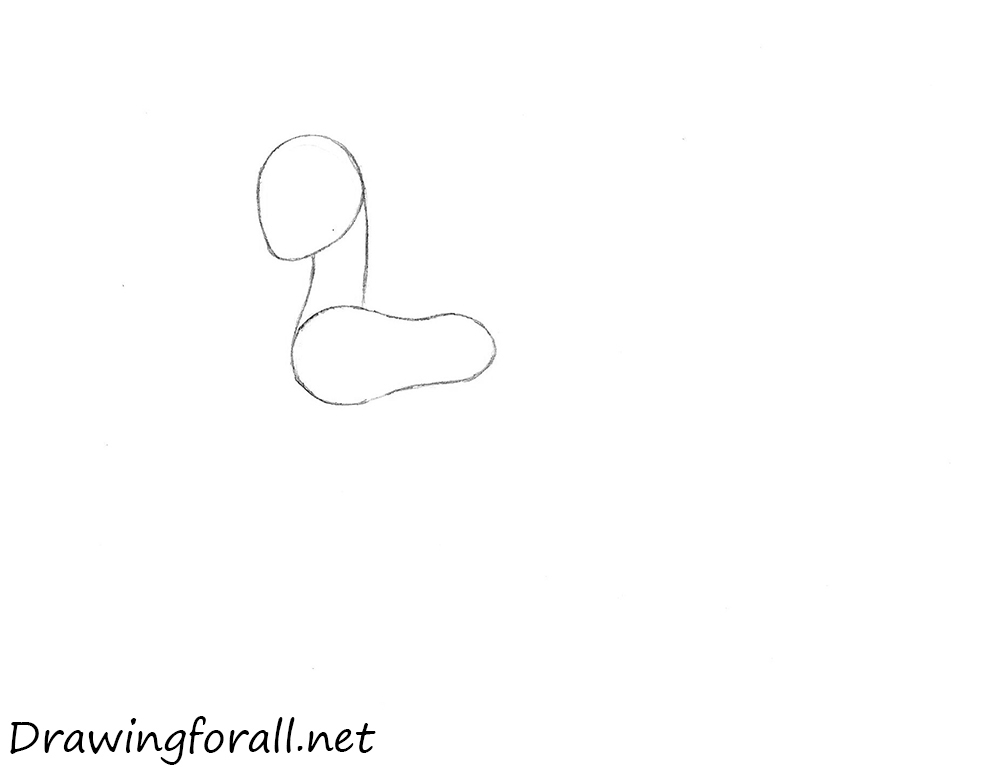 Draw the legs of princess Celestia. The legs look like elongated and slightly curved cylinders. The rectified leg consists of a simple figure, and bent legs consist of two simple shapes. 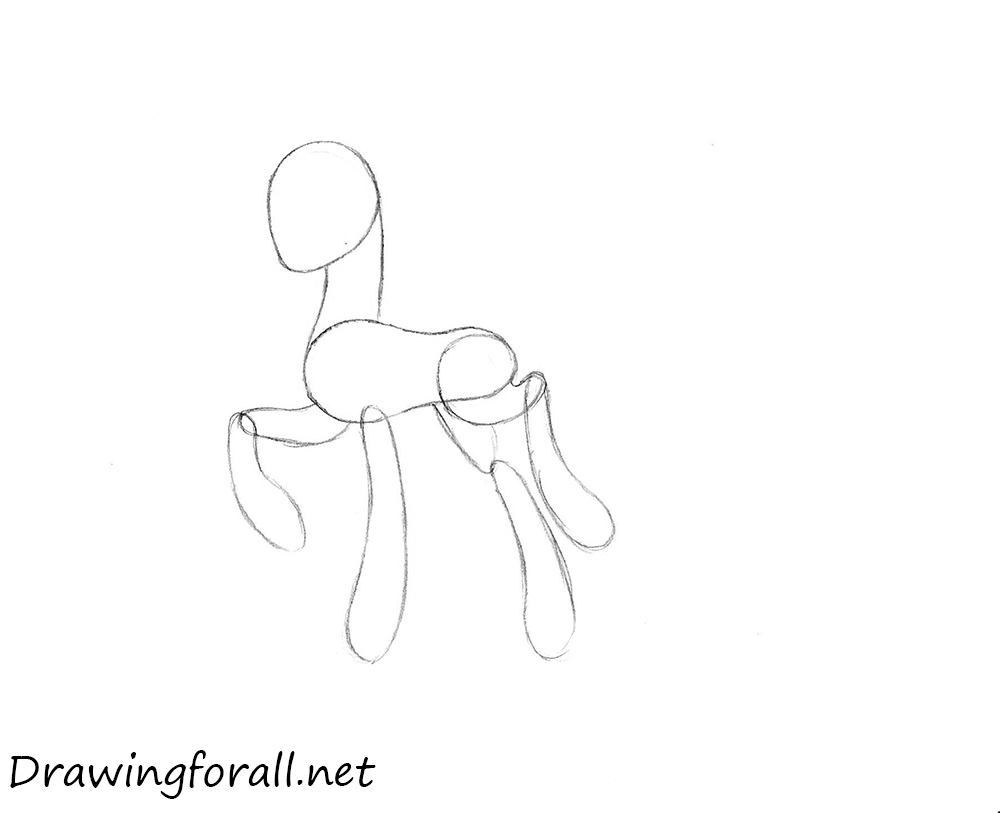 Mark up the face princess Celestia. Draw on it three curved lines, evenly distant from each other. These lines will help us to draw facial features.

Using the guidelines from the previous step draw the contour lines of the eyes and protruding mouth of Princess Celestia. 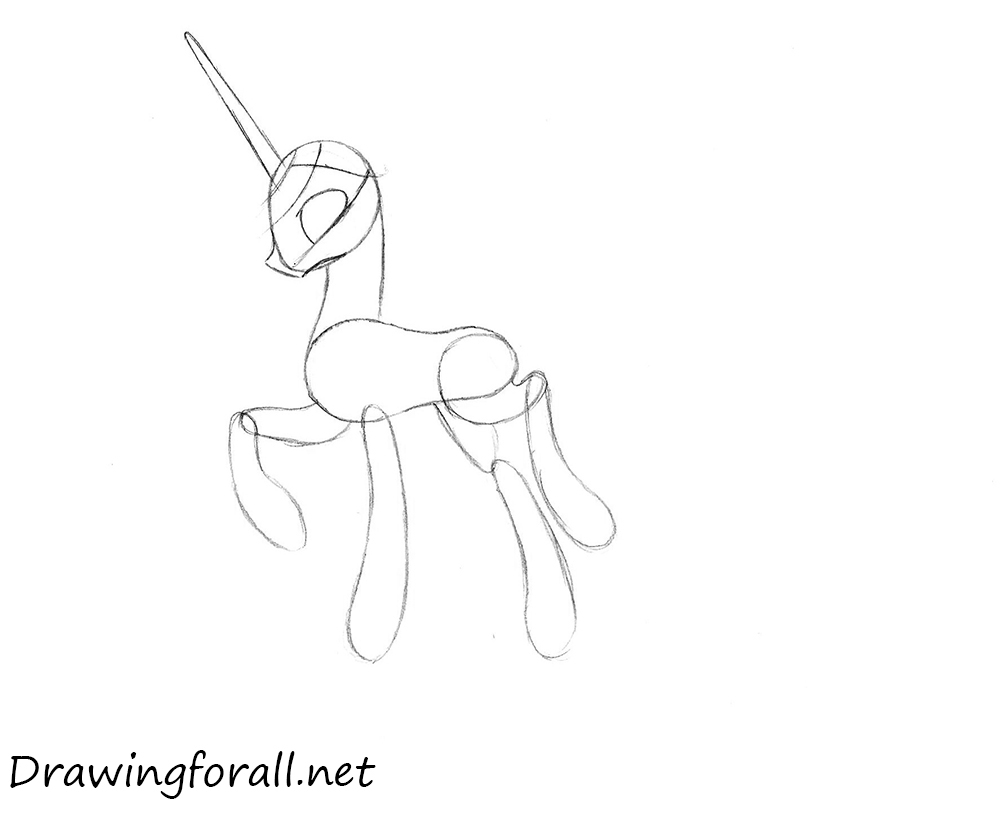 Draw the diadem and ear. Also, draw the contours of the hair of Celestia – lower part of hair curls behind her ear in the area of the nape. And the top part of the hair goes up, skirting the diadem and the horn. In the same step draw the eye, and pupil inside the eye. 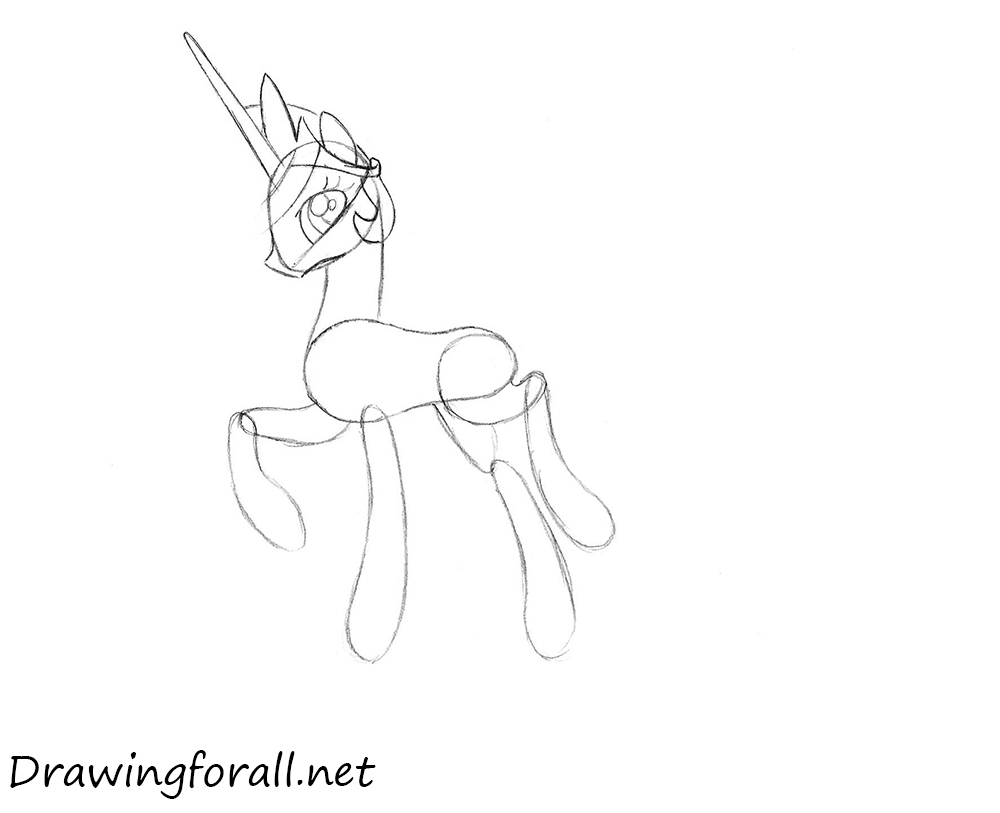 In this step of the drawing lesson about how to draw princess Celestia, we outline the silhouette of the mane of the pony – size it is almost superior to all previously drawn body of the pony. Mane must continue the line of hair from the previous step, which skirted the diadem and the horn. 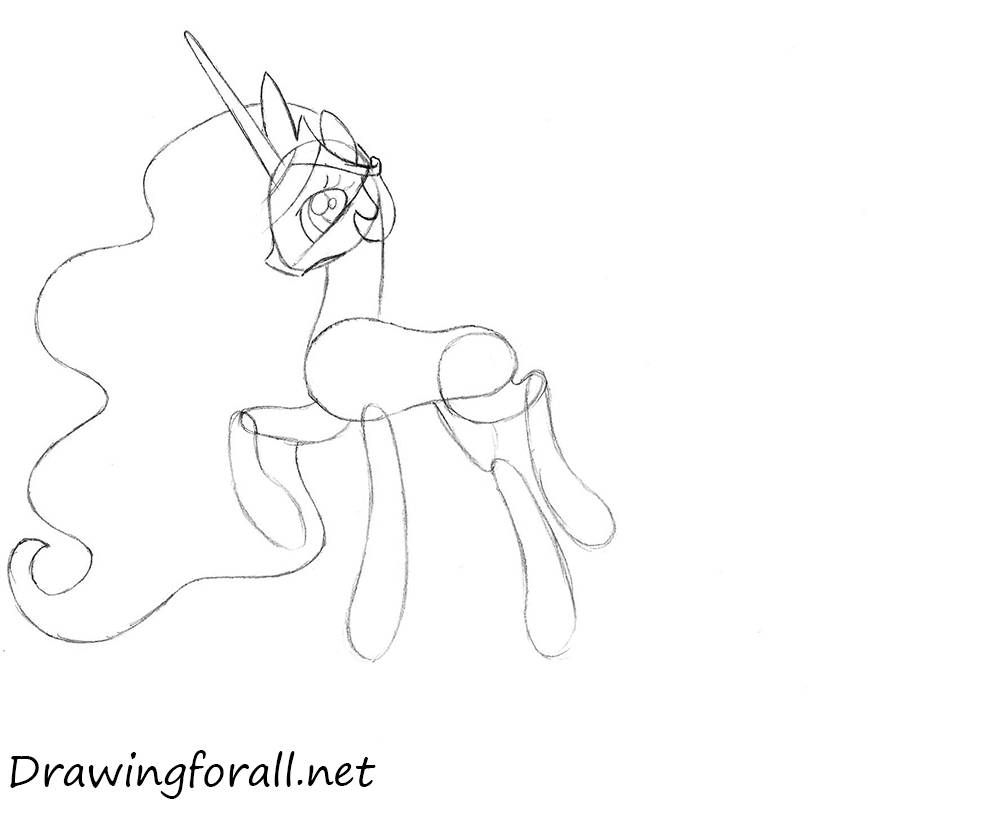 Erase from the face of Princess Celestia extra guidelines, circle the features, horn, and diadem. We outline the nose and mouth using just two short strokes. 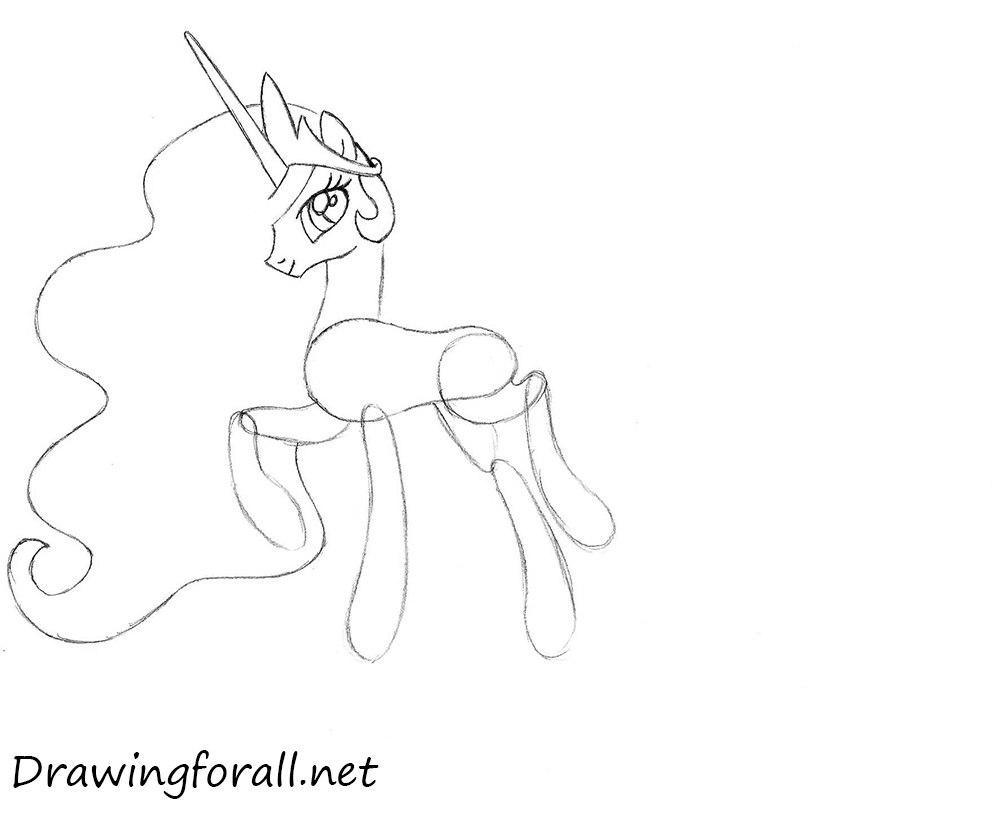 Using long and curved lines draw the details of the mane. Do not forget important rule – the beautiful mane of Celestia, as well as any hairstyle in general, should be drawn in the direction from the hair roots to the tips. 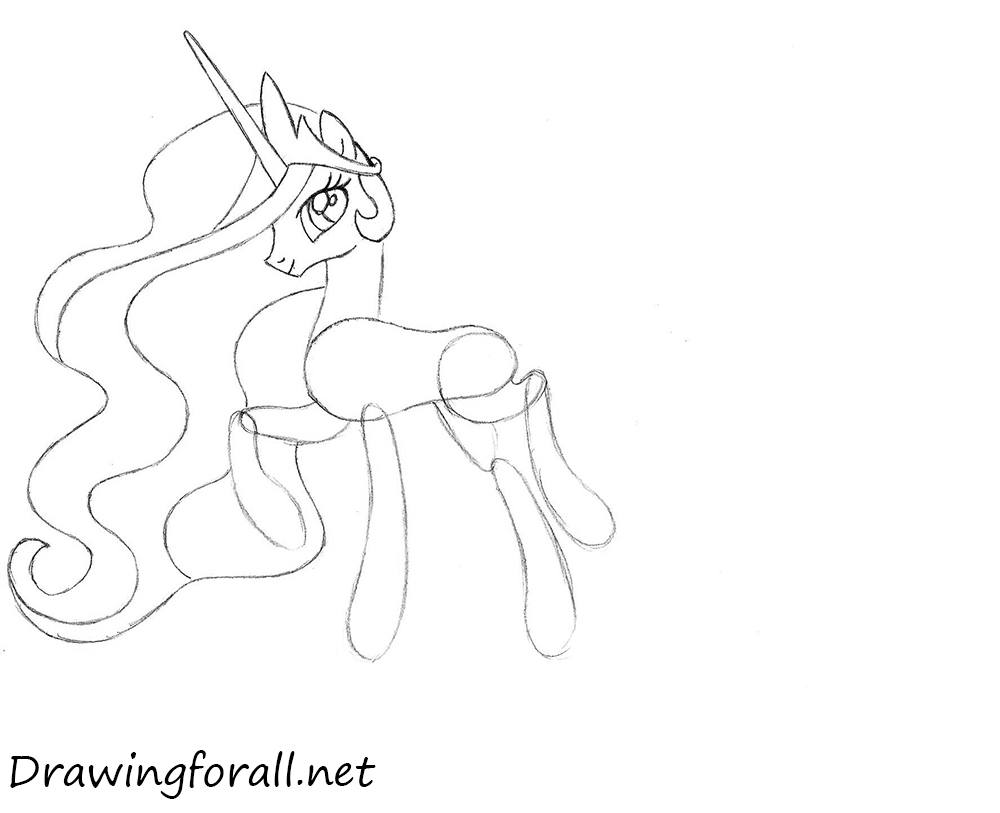 We outline the smooth contours of the breast ornaments of princess Celestia. Circle the contours of the legs so that they were more roundish. n the same step, draw the outline of the mane, located on the back of the neck. 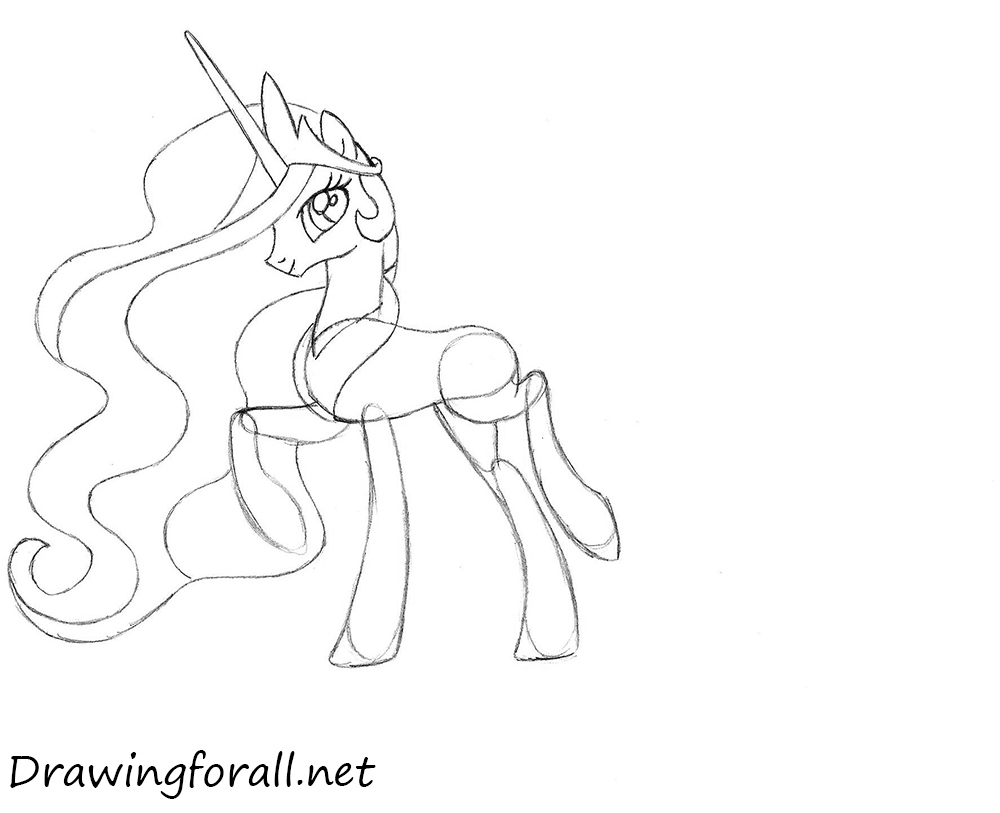 Erase from the torso and legs extra guidelines, and circle the contours to get the result as in our example. 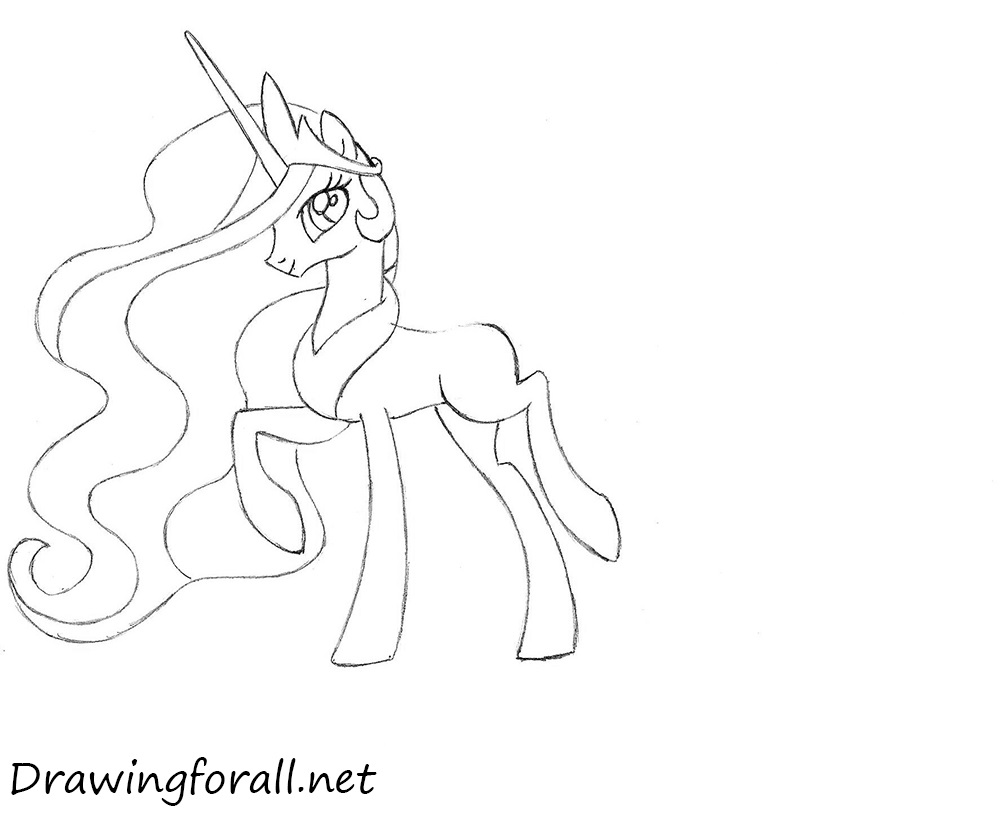 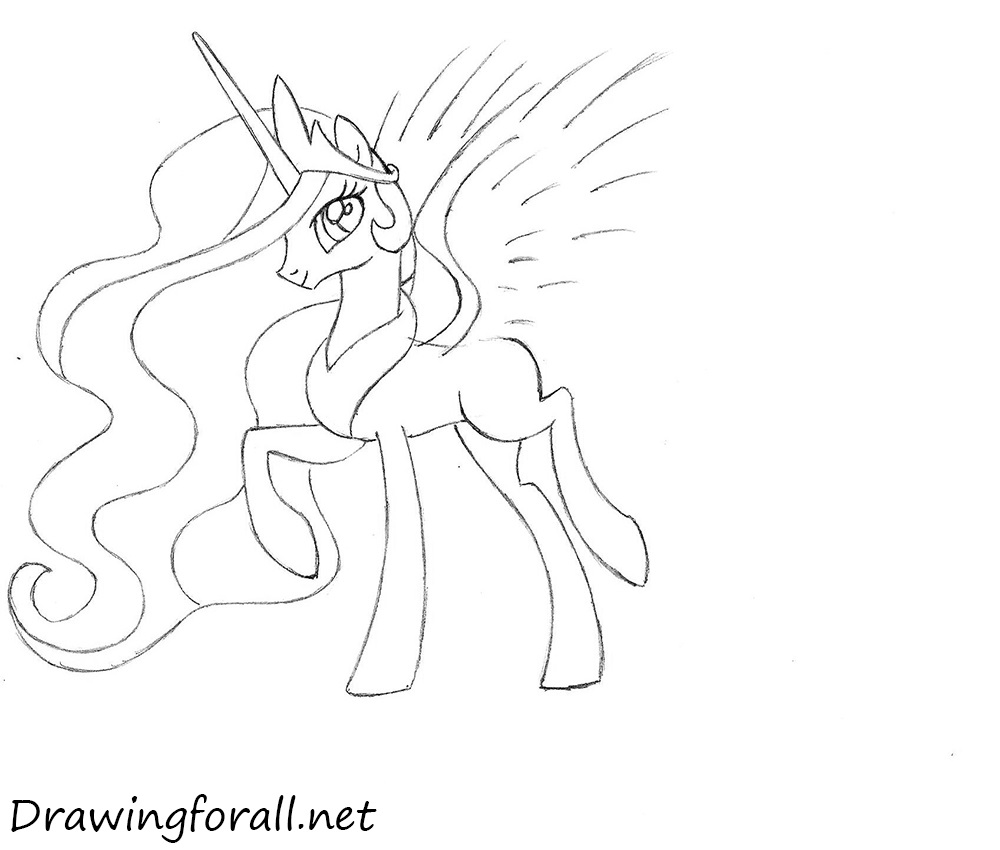 Circle the outlines of feathers, give a finished appearance to the wings of Princess Celestia. Paint over the pupils, leaving glares, as in our example. 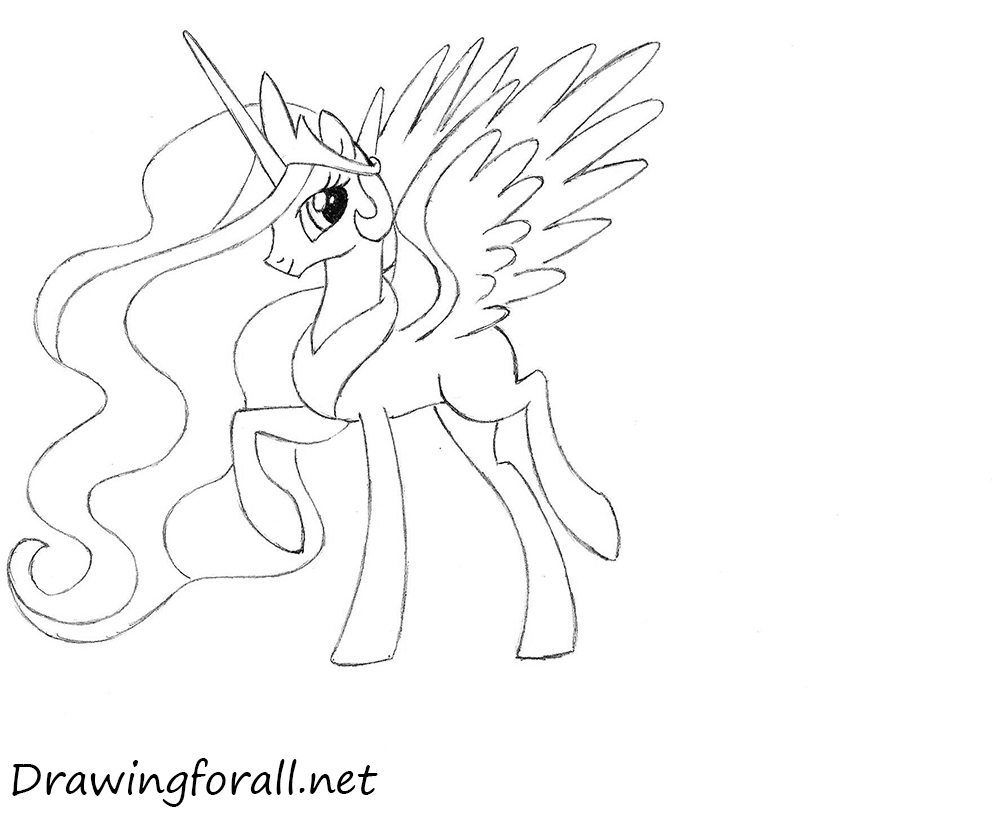 Using smooth, wavy lines draw the silhouette of the tail of our magnificent Princess Celestia. 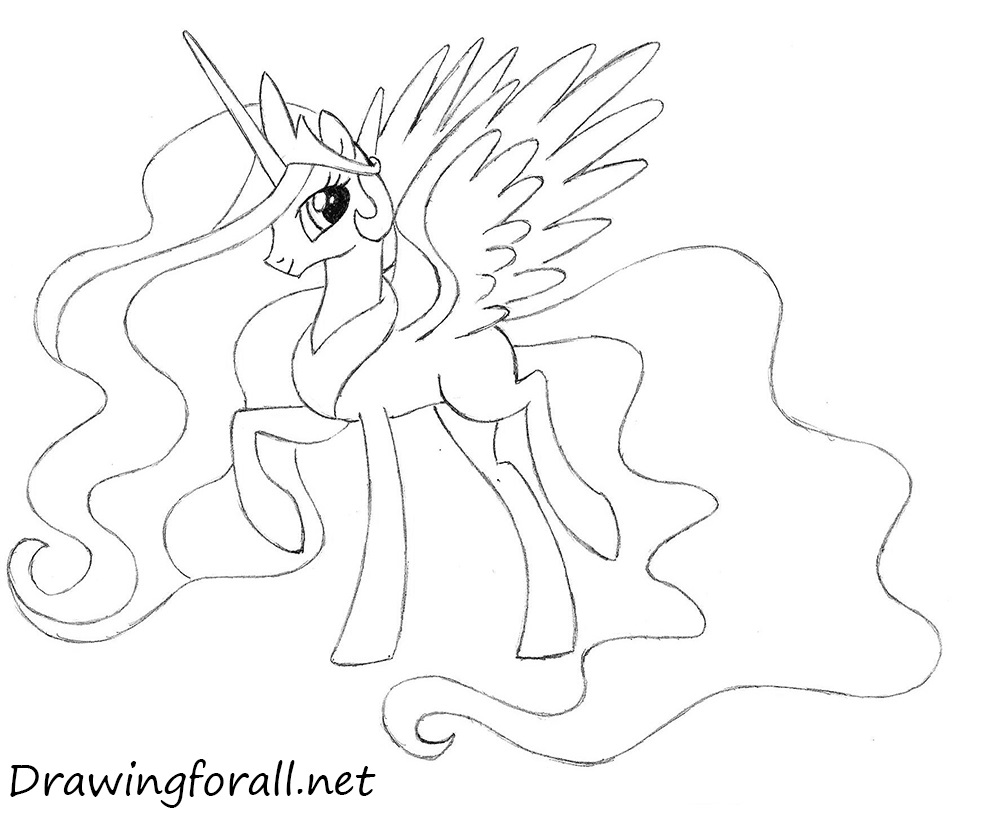 Draw patterns on the diadem, chest of Celestia, as well as on the lower parts of the legs and on her thigh. We outline the lines of the tail – as well as the lines from the previous step, they must be smooth and curved. 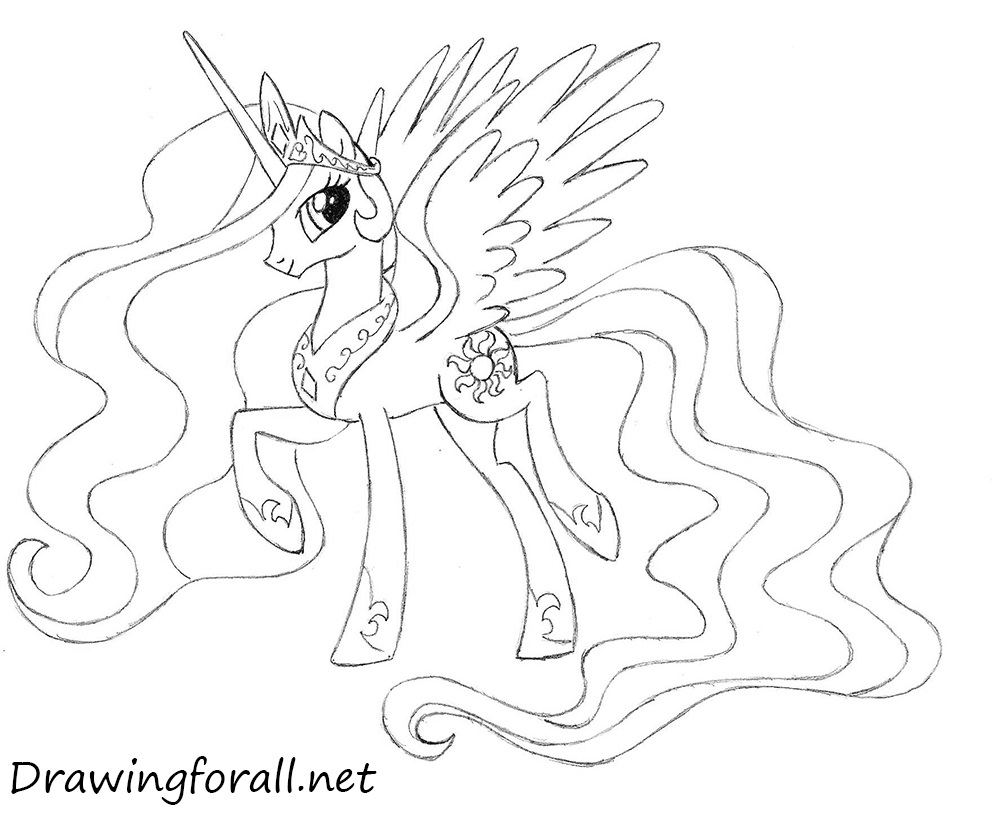 In we are in the final step of the drawing tutorial on how to draw princess Celestia. Draw a horizontal line on the horn of Princess Celestia. Note that the intensity of their arrangement increases toward the tip. 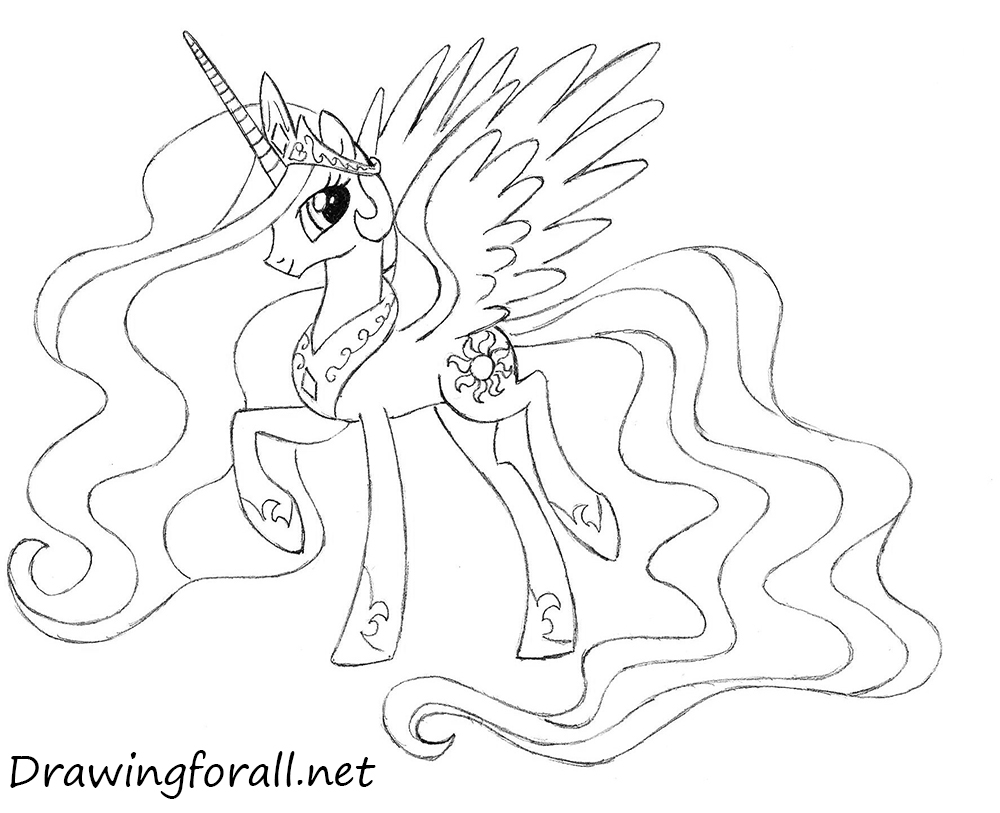 It was a drawing lesson on the theme of the cartoon My Little Pony, and today we told you how to draw princess Celestia. The tutorial was prepared by Drawingforall.net. Goodbye, friends!