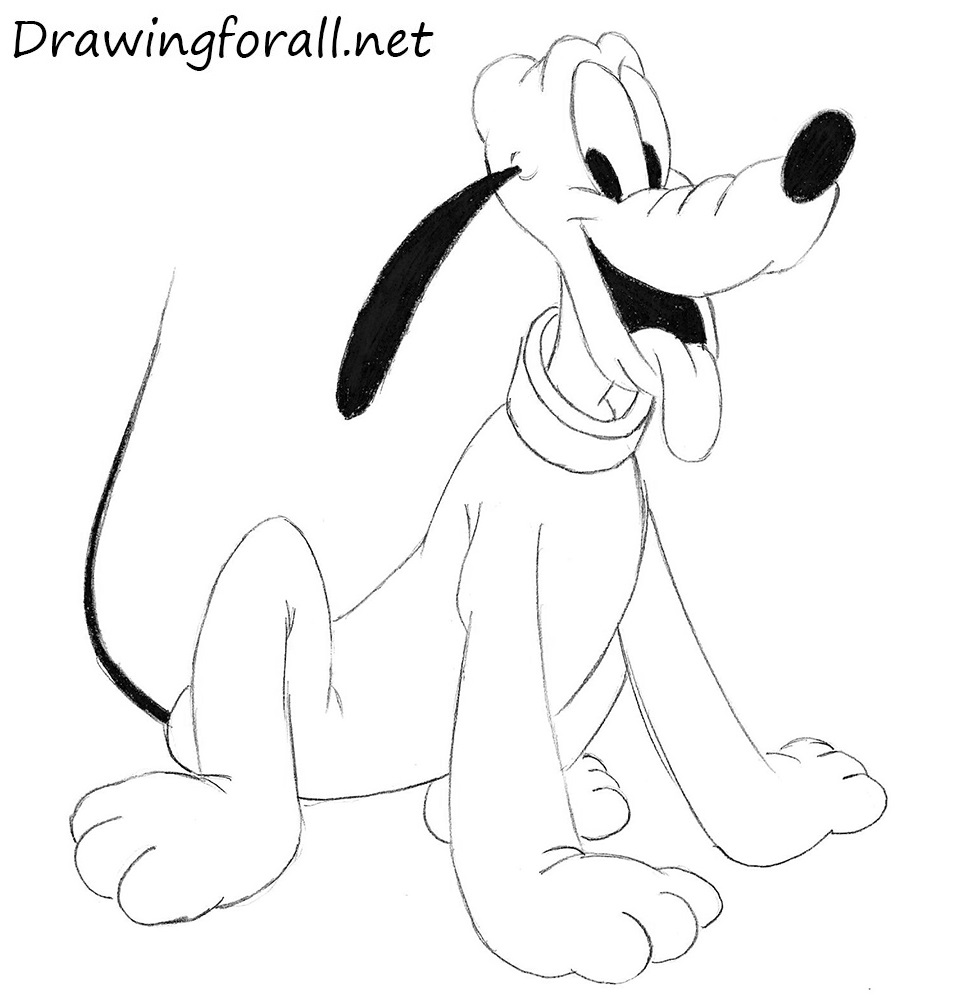 Hello, dear readers! Today we’ll show you how to draw one of the world’s most famous dog – Pluto from Disney!

For the first time Pluto appeared on the screens in the distant 30th year of the twentieth century, and since then has become one of the most recognizable pets on the planet.

In most of series Pluto was a pet of other Disney character – Mickey Mouse, but there are several cartoons, in which Pluto is the central character. Let’s start the lesson and learn how to draw Pluto!

At first sketch out the head of Pluto. The head looks like a small circle, elongated torso looks like bean (or similar to the body of Minions), and the neck – just a smooth line that connects these two figures. Pay attention to the head and body size, try to keep the proportions as in our example. 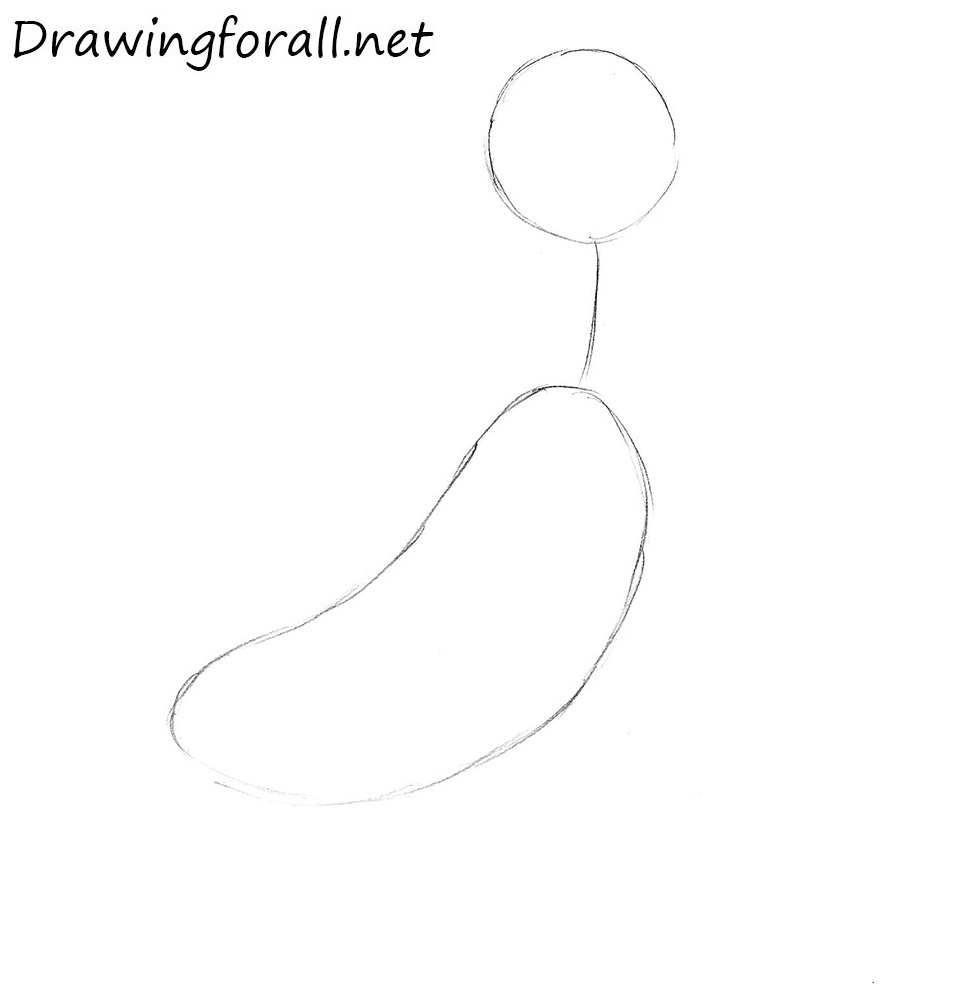 This step seems very difficult, but if you divide it into several stages, then you will understand and will not get confused. To begin with, we note that we will create the silhouette of Pluto in the direction from the head to the feet, that is, at first we will work on the head. Draw the jaws, which consists essentially of two similar figures, the top part is a little bigger than the lower part.

Then we go down below and draw limbs. We recommend you to draw first the forelimbs, and then the back limbs.  The lines should be rounded and smooth. Pay attention to the dimensions of the lower parts of the limbs – they are quite voluminous. The final of this step we the outline the tail. 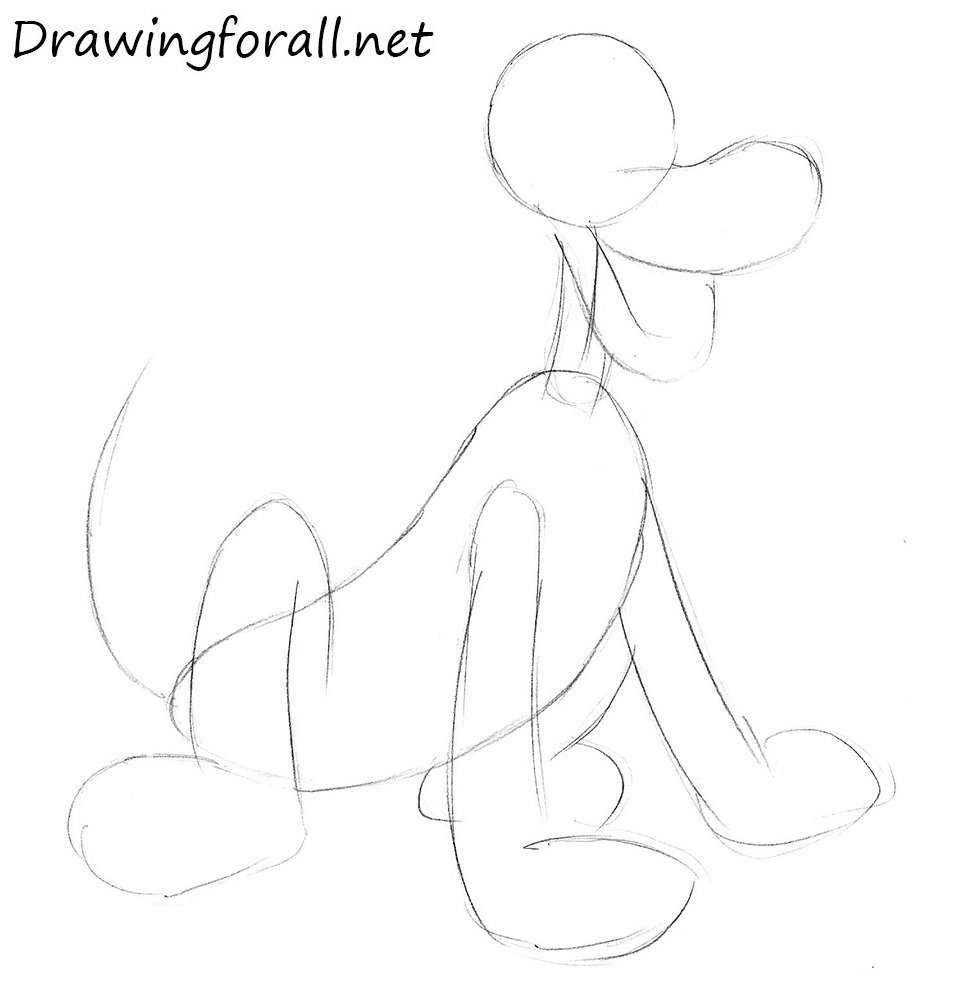 This step is also pretty simple. In this step we draw the face of Pluto. His eyes look like two elongated ovals. Then draw the pupils inside the eyes. Pay attention to their position in the corner of the eyes – this is very important, because it helps to pass the viewing direction. Next draw brow folds (they are parallel to the outlines of eyes). Then draw rounded, elongated ears, tongue and nose. 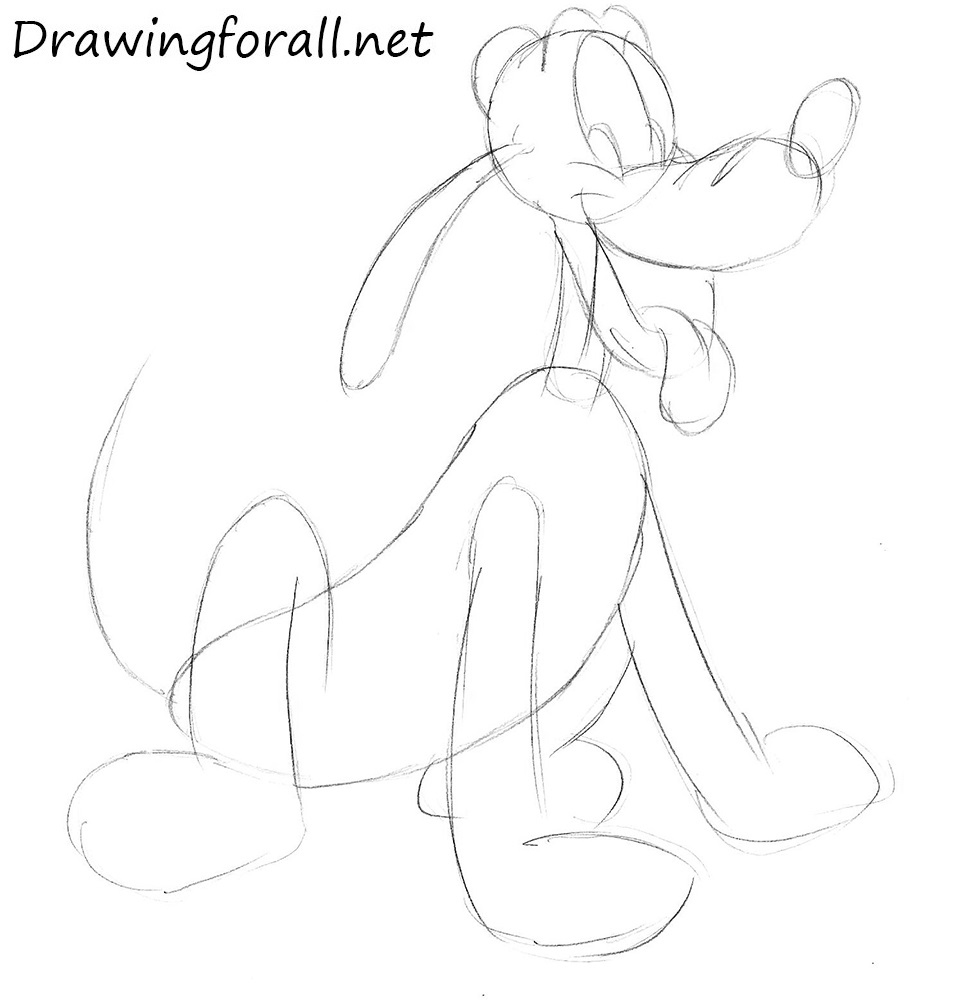 Erase extra guidelines and unnecessary touches from the face. When Draw a couple of folds on the nose, circle the head, using clear, confident lines. Incidentally, Pluto – is not the only famous dog on our website. We also have a lesson on how to draw Brian Griffin. 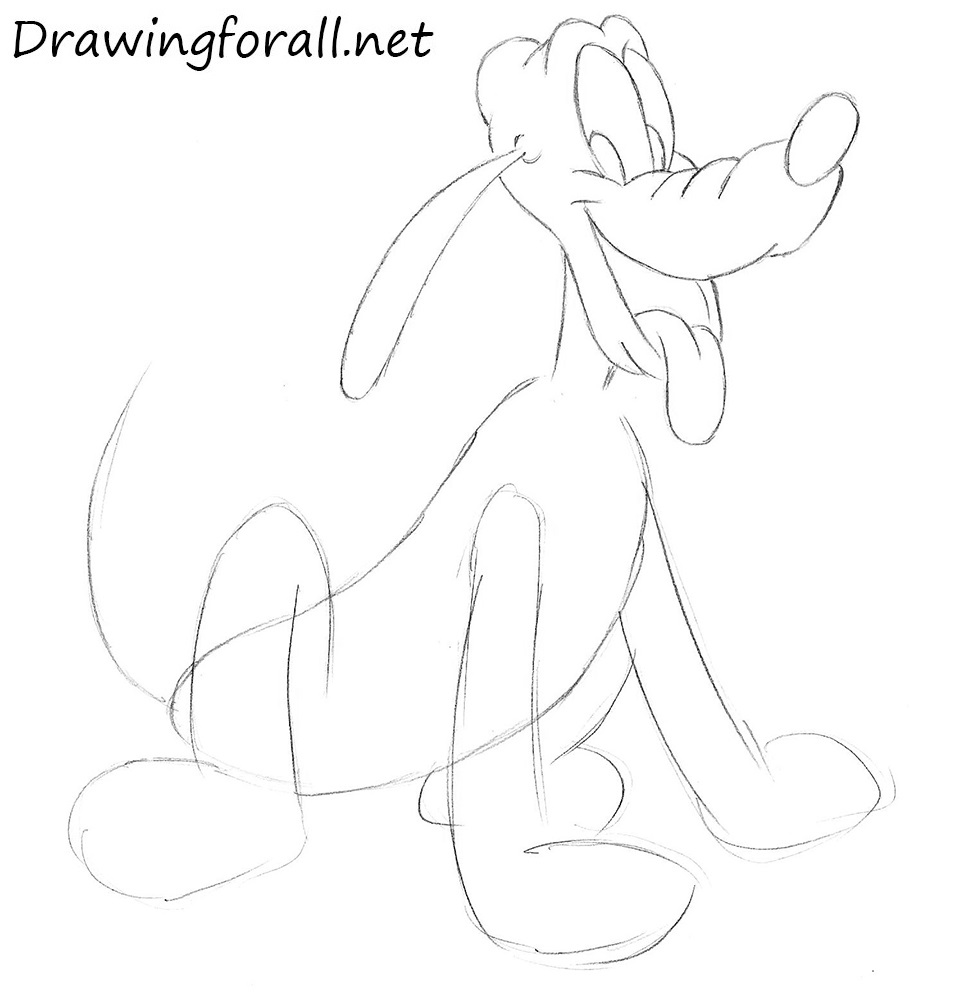 Extremely important accessory of Pluto – a collar. Please note that the collar should sit freely, and it should be located at the bottom of the neck. In fact, it would rather lie on the shoulder girdle. 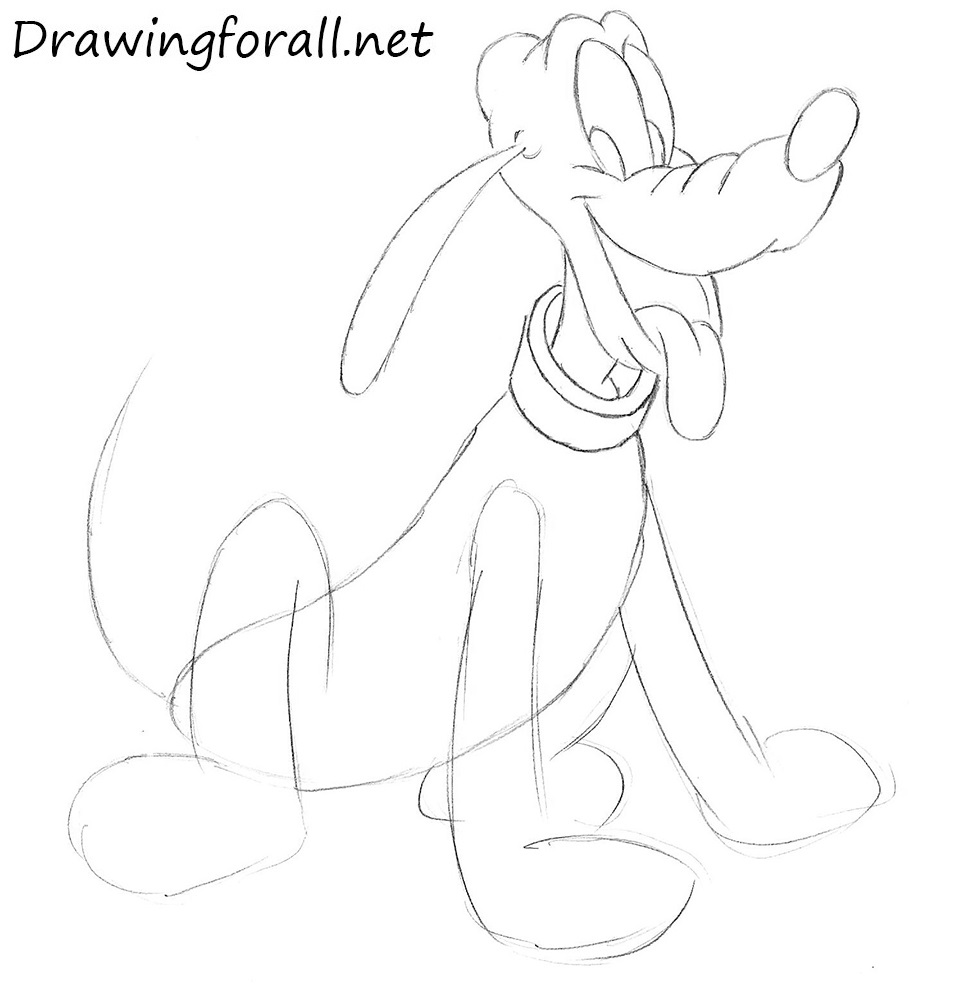 Start to draw the limbs of Pluto. Circle their contours and outline the fingers – three on each paw. Do not forget also about the folds of skin in the area of  bend of limbs, as well as in the areas where the limbs are connected to the torso. 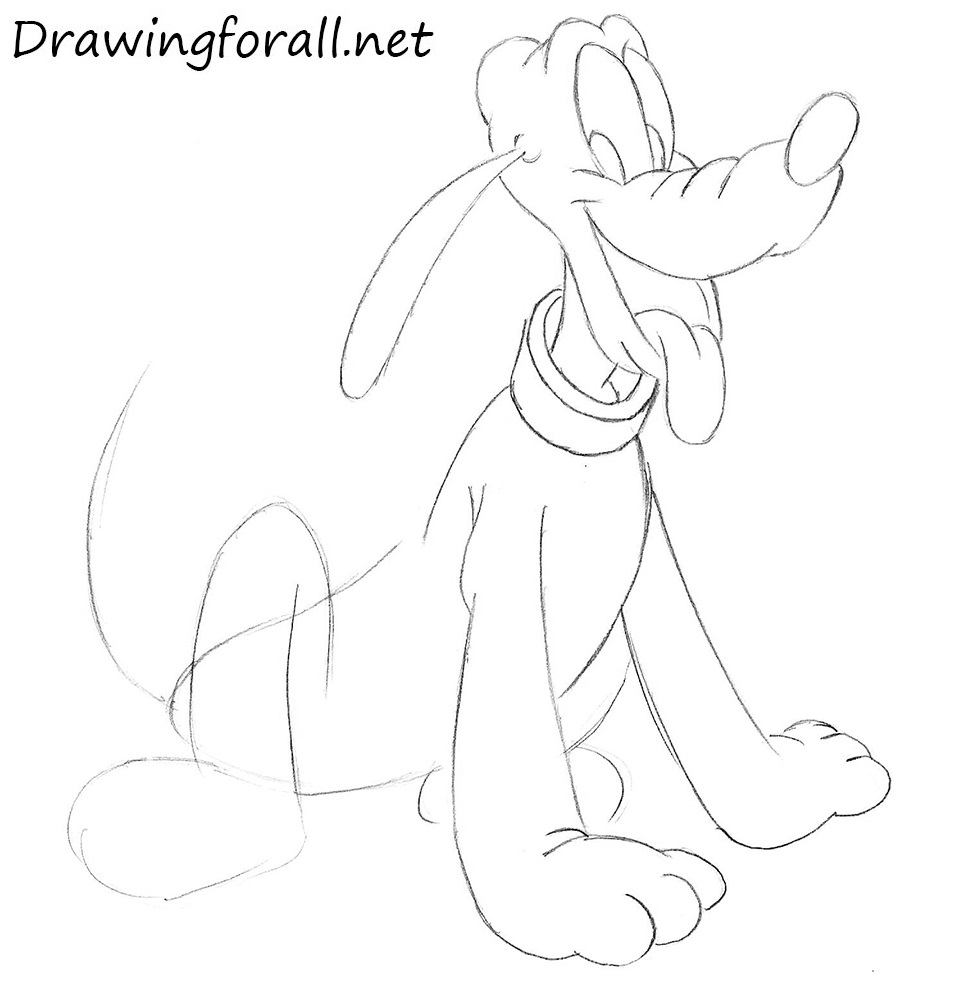 We perform the same operation with the hind legs, namely draw their contours, and erase the extra guidelines of the previous steps. Draw the tail. 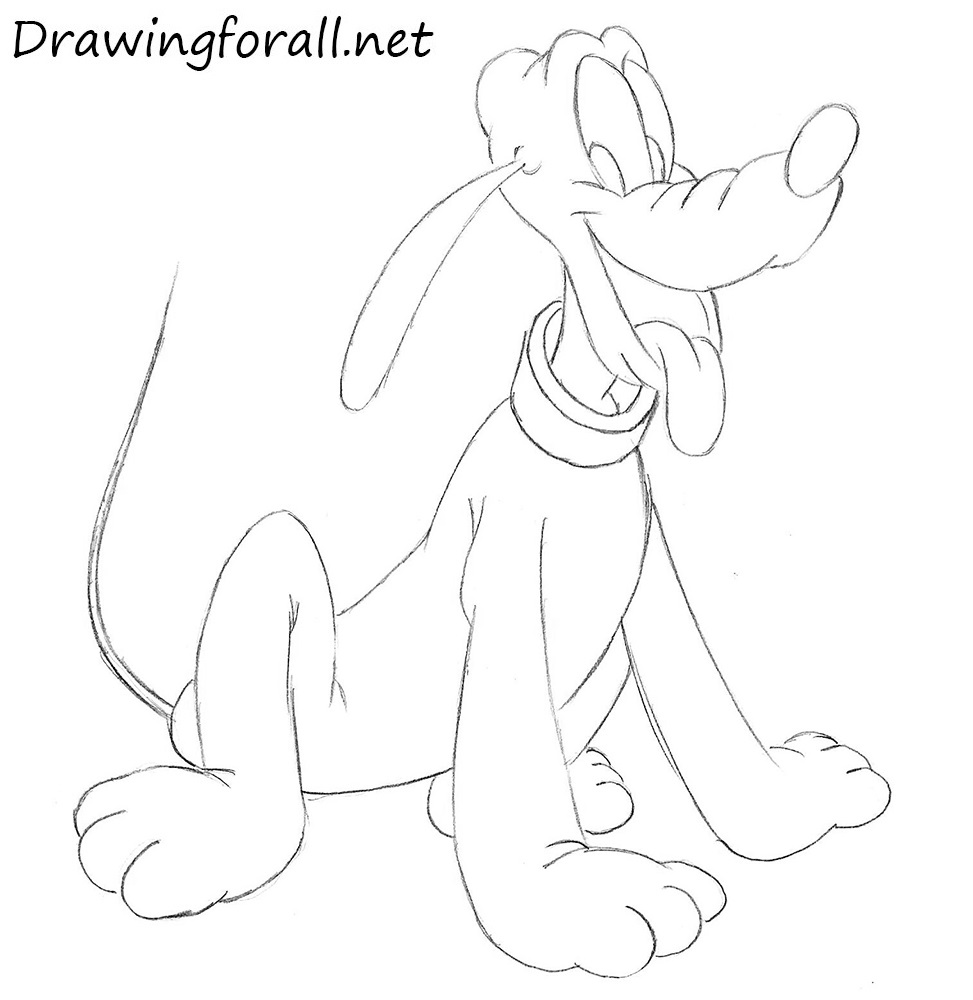 It remains only to paint a the pupils, ears, nose and mouth of Pluto. And don’t forget to paint the tail. 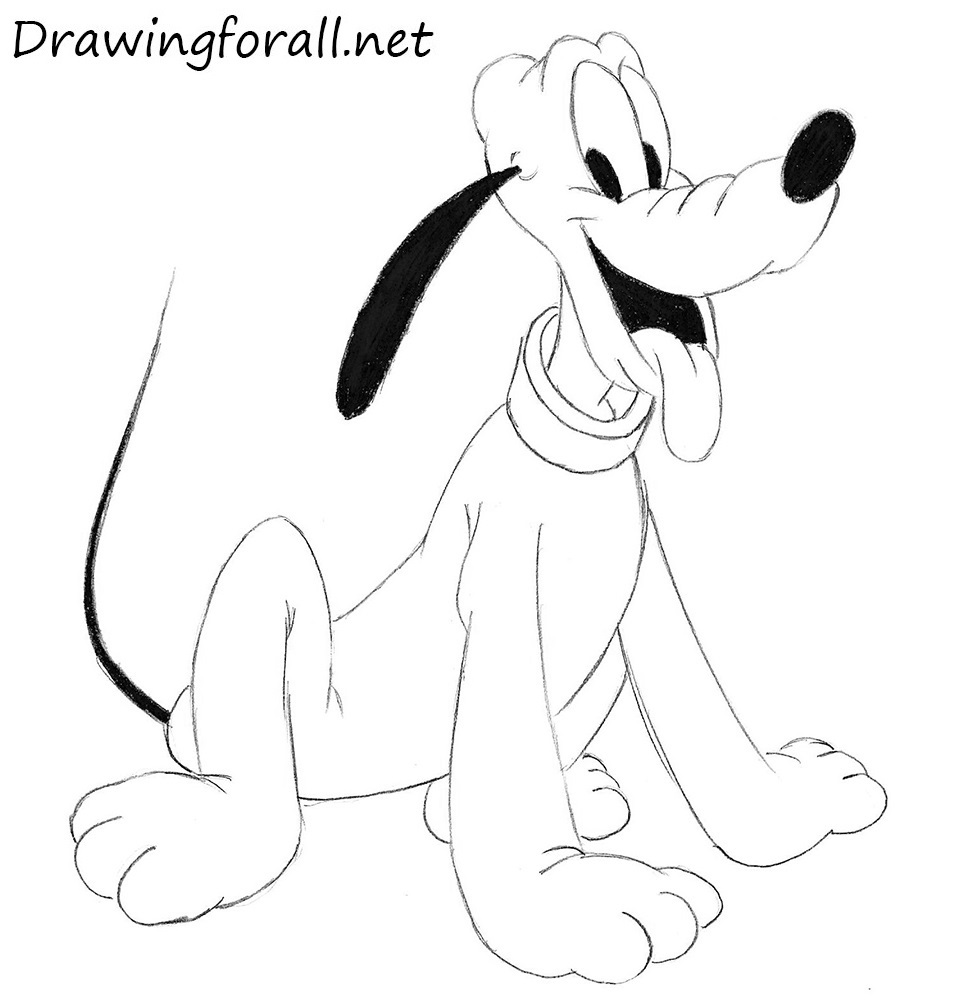 It was a drawing lesson devoted to how to draw Pluto the Pup. Lesson prepared for you by artists of Drawingforall.net, goodbye!