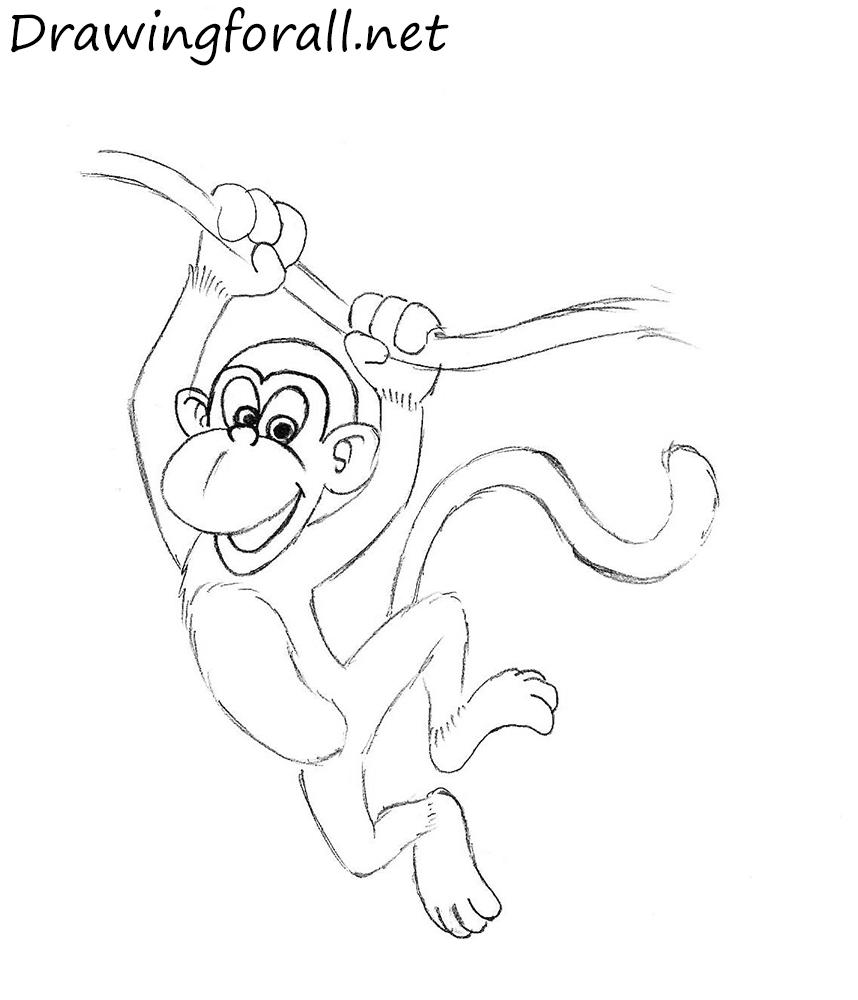 Hello, dear young artists! On our site, we continue to create drawing lessons for beginners and children. And today we have prepared for you a very simple drawing lesson in which we will focus on how to draw a monkey for kids. Of course, looking at the monkeys, that are cheerfully throwing excrements at each other, it’s very difficult to believe that these animals are our ancestors. Nevertheless, according to Darwin’s theory, humans evolved from apes, and so we have much in common. And so, let’s start drawing.

From the perspective of an artist to draw a monkey is very interesting. Even in this cartoon drawing you can see similarities of man and monkey. We have already drawn animals cat, cow, rabbit, and the proportions of monkey are much closer to human proportions. First of all, draw the head of the monkey in the shape of a circle. Then draw the spine, that which smoothly goes into the tail, using a curved line. With short and straight lines draw the arms and legs. In the initial steps we should use light and smooth lines, in order to be simple to erase the guidelines in the next steps. 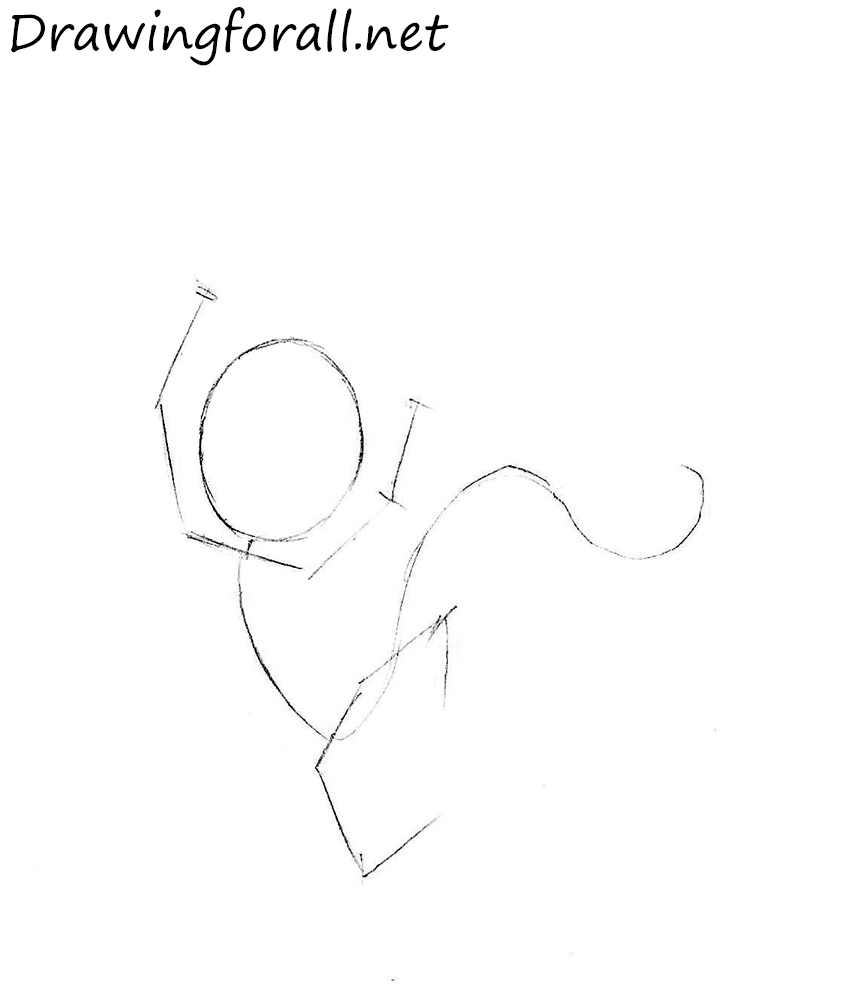 Now turn the stickman of our charming monkey in silhouette. To begin mark up the head using two perpendicular lines the vertical and horizontal. The vertical (note the slight bend) is the line of the facial symmetry, and the horizontal (bend too) outlines the position of the eyes. These two lines are perpendicular, and their curves indicate the position of the head it is slightly raised up and deployed. Hands are divided into three clearly distinguishable parts the arms (between the head and the elbow), forearms (from elbow to wrist) and hands. Using elongated and curved shape draw the torso. By the way, the legs too made up of three parts (top to bottom): thighs, shins, foot. Using curved and smooth lines draw the shapes of the tail. 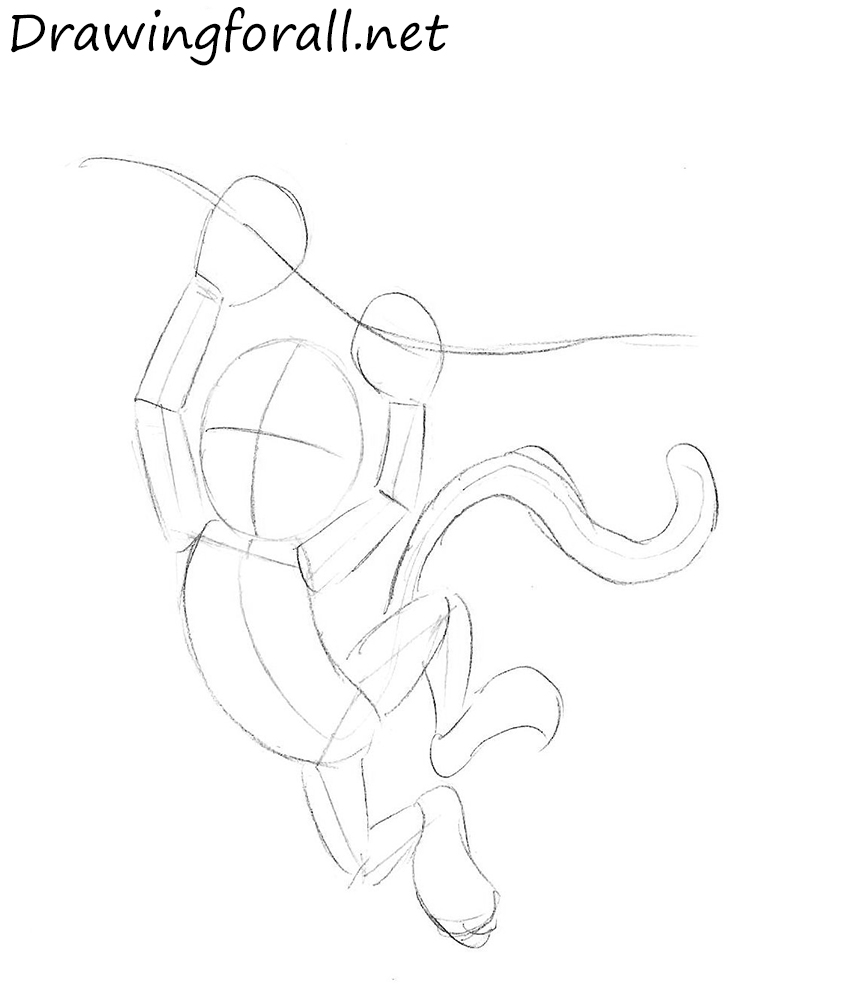 Draw up the face of our cute monkey. Using the lines of symmetry of the face from the previous step, draw the eyes (they look like two elongated ovals). Draw the ears, in the shapes of two half-ovals. Then draw the mouth, as in our picture below. Also, draw the line of the brows above the eyes in the shape of letter “M”. Note interesting point as well as in human facial proportions, the upper ends of ears of the monkey lying in the same plane with the eyebrows, and the lower tips of the ears in the same plane with the nose. Similar monkey faces you could see in many cartoons. 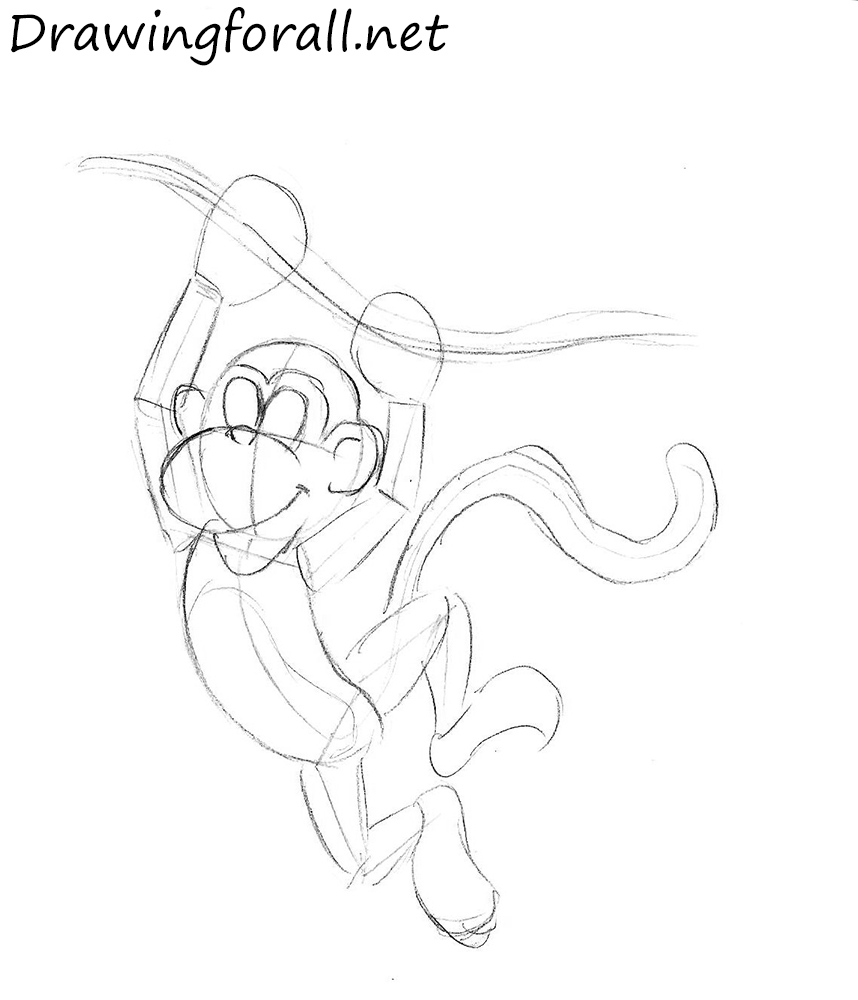 Erase the extra lines from the head. Circle the lines as in the picture below. Draw the auricles in the ears. Sketch out the little nose. Draw the pupils in the eyes note their location, it is it transmits the view direction. Also, don’t forget to draw the vertical curved line under the nose. 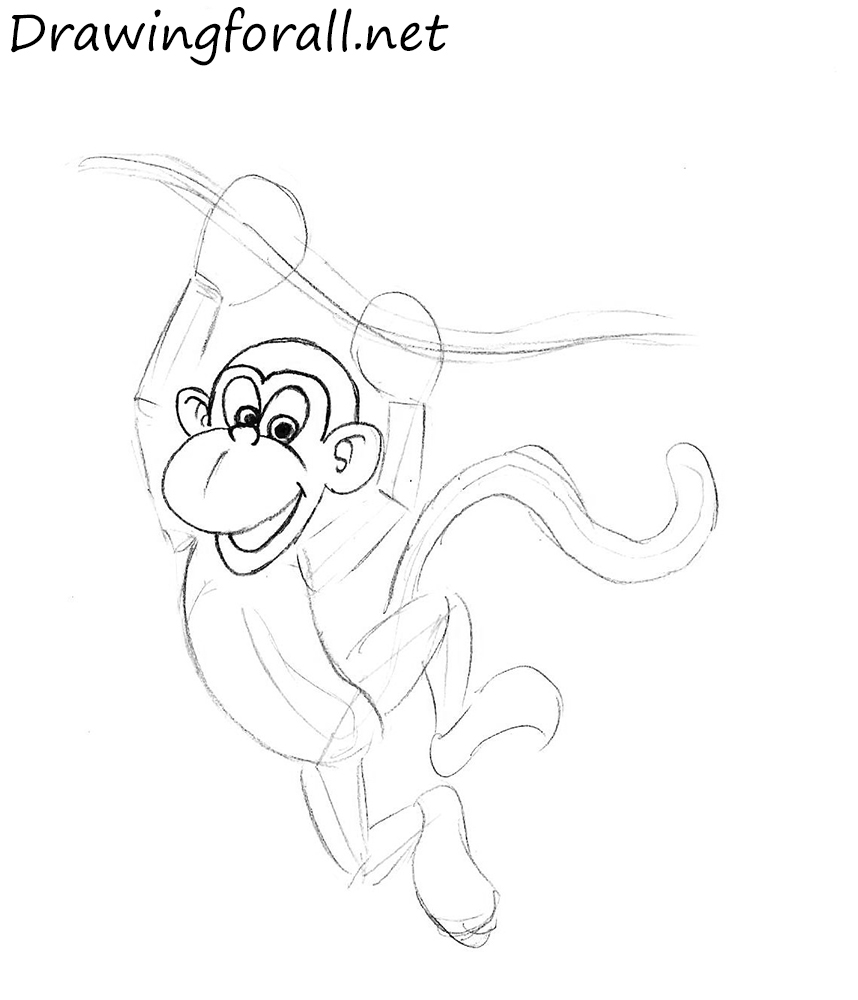 Draw out the vine, the hands of our monkey, draw fingers. How can more accurately draw the shape and location of the hands, because we need to pass the position of grasping hands. Using a few vertical lines mark the wool, which ends at the wrist. Do not forget to erase the guidelines. 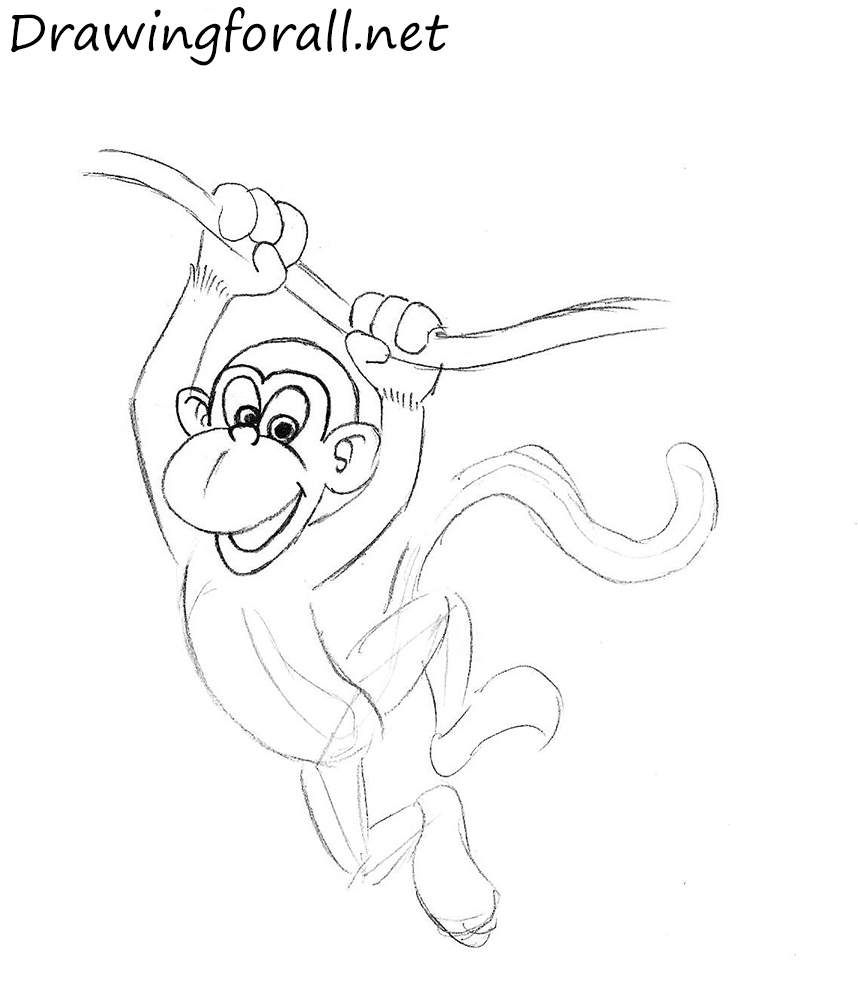 The penultimate step in the drawing lesson how to draw a monkey for kids. Also, as in the previous steps, draw the torso, and in the center draw a pattern, like an elongated potato. 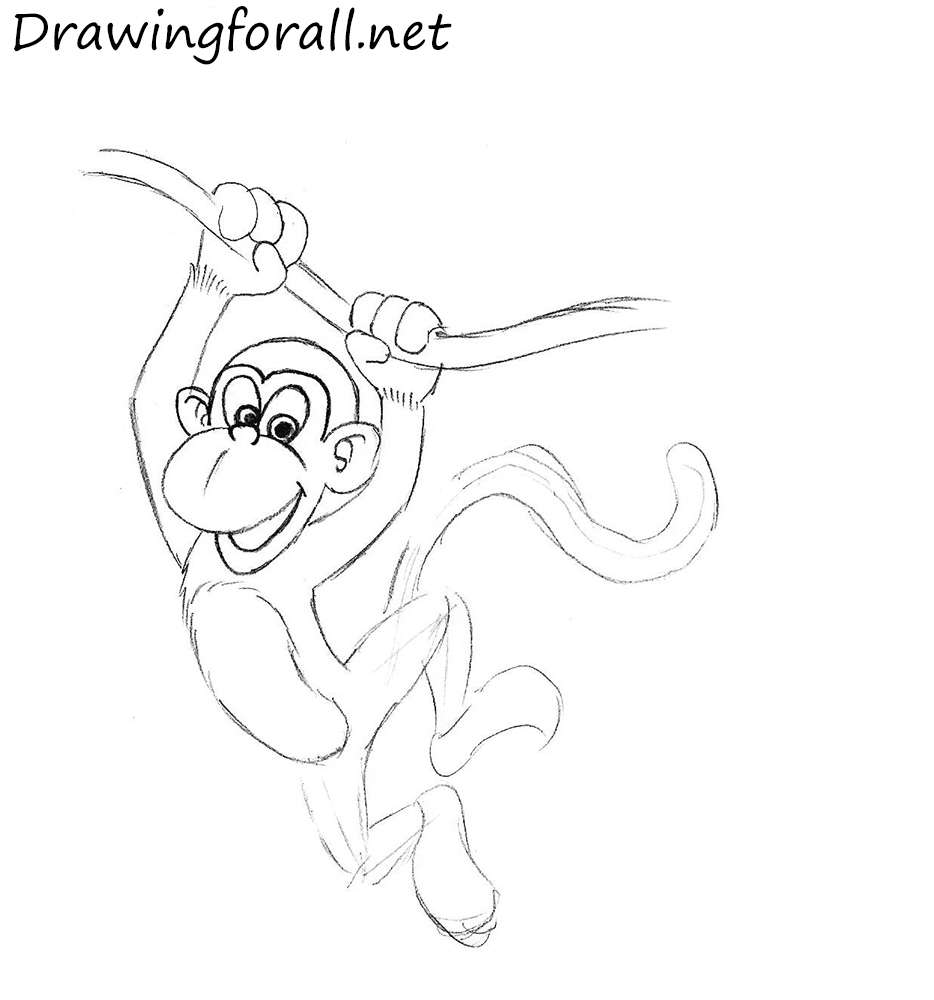 Finish the job, drawing the legs and tail. The monkey is ready. Look at the resulting drawing closer. Delete all excess and unwanted lines and strokes. Make the final touches, to get monkey, as in our example.

This drawing Lesson for you was prepared by the artists of drawingforall.net. All the best and goodbye!