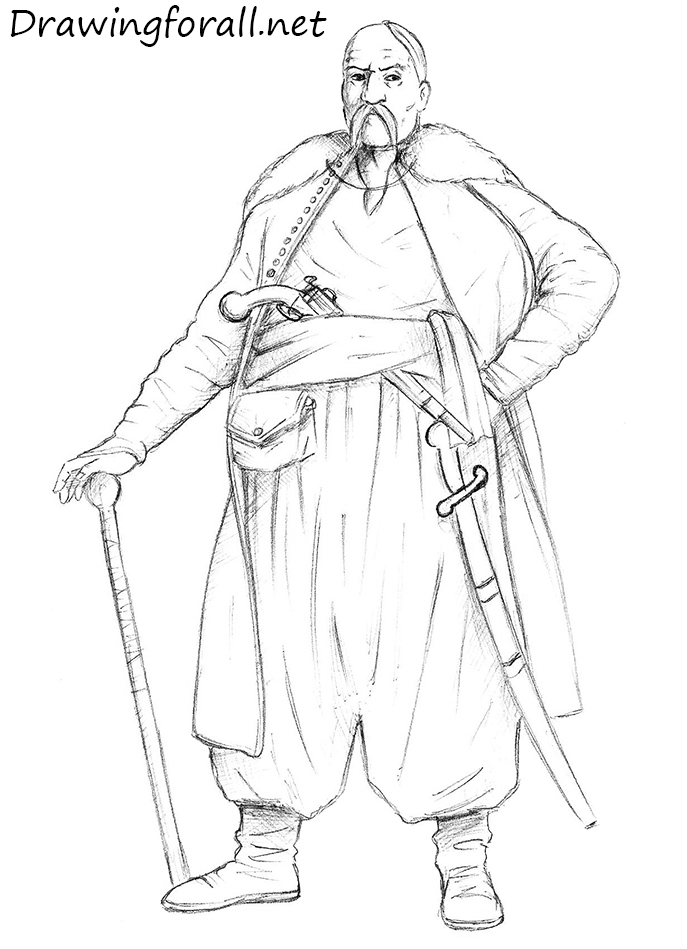 Hello! Today’s drawing lesson will be devoted to the ancient warrior, one of the most freedom-loving and free people in the troubled times of the late Middle Ages and modern times.

Our today’s guest and his people unite in groups and communities, the heads of which were elected at the meetings, where each vote is taken into account. I think everyone guessed that we are talking about the Cossacks. So, let’s learn how to draw a Cossack, fearsome warrior!

As in other our drawing lessons we start with a stickman – man made of sticks and circles, which we draw to indicate position of the character, its proportions and the position on the paper. Of the features of the figure we note that the body is chunky, and his growth a little low. Ideal man growth, according drawing textbooks, are equal to sum of the lengths of the seven heads, but here growth is slightly lower, about six heads. Another rule of proportions – arms reach to about the middle distance from the waist to the knee. Also pay attention to the curved line of the spine –  this provision makes the figure majestic and impressive. 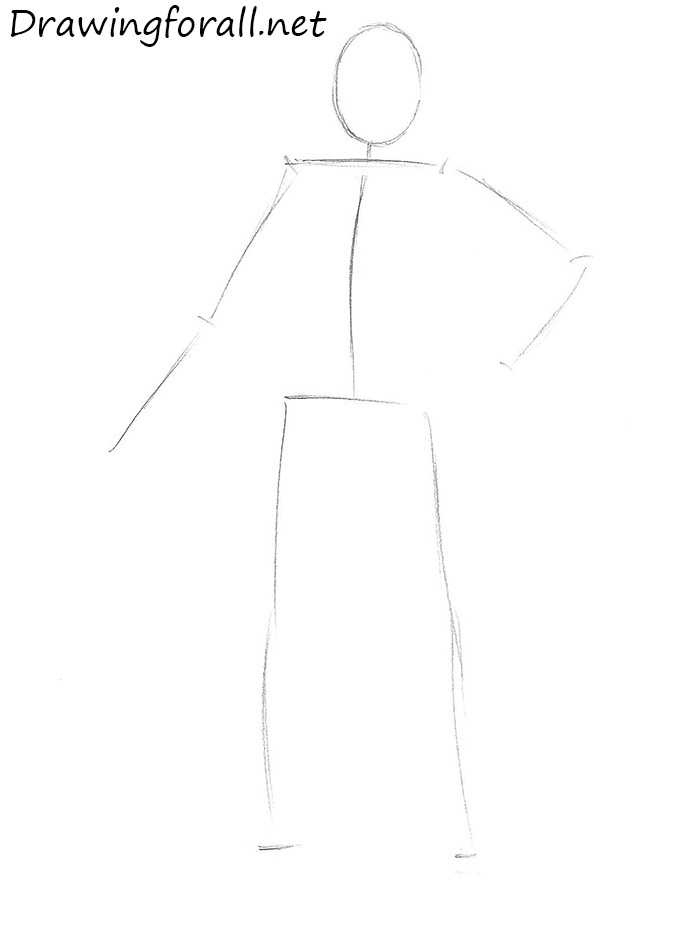 At this step we add some volume to the body of the cossack. Draw a vertical line of symmetry of the face that should divide the face into two equal parts (though it should be visually slightly displaced to the left away in accordance with the position of the head). It must overlap with three lines. The top line indicate position of the eye. Immediately beneath it located the short lines, which will show the position of the nose and mouth. 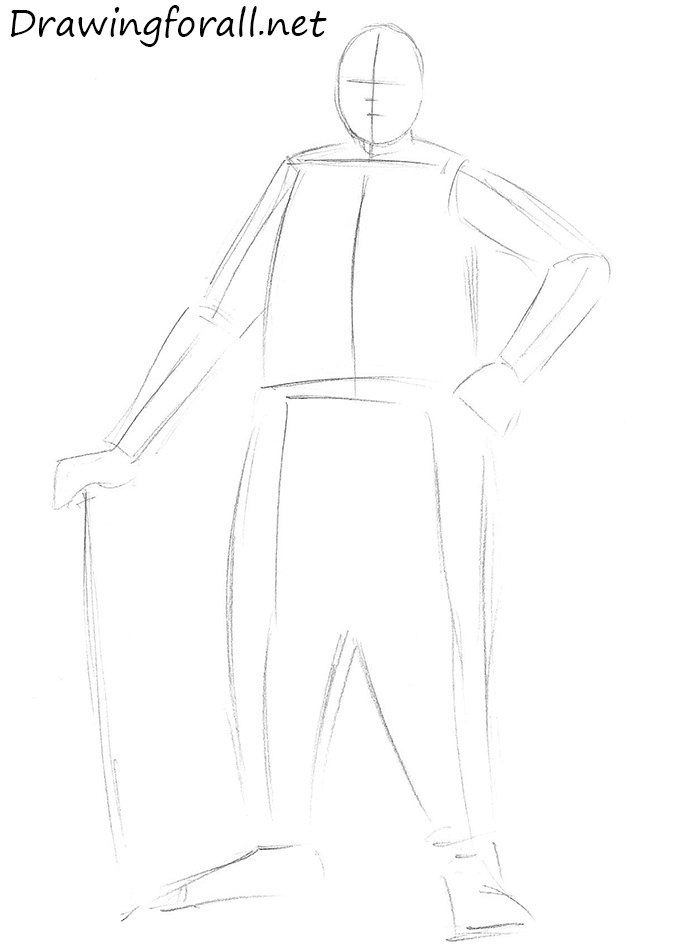 Using the markup from the previous step, outline the main features of the face. The head of our Cossack should be slightly raised – after all  this warrior is very proud and impressive, probably someone from close to the chieftain. Draw the eyes, using almond shapes. Above the eyes draw the eyebrows, using curved dark lines. By using the vertical line from the previous steps draw the nose. Draw the hanging mustache and tuft of hair on his shaved head. 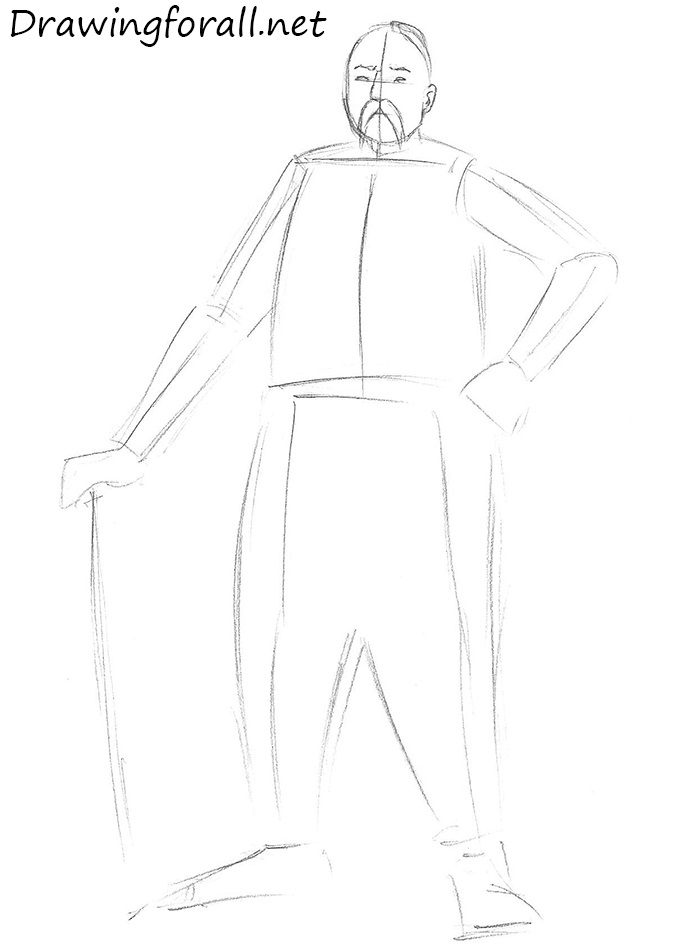 Draw a face. Add the wrinkles – they look like short and slightly curved horizontal lines. They are located mainly in the forehead and under the lower eyelids. Also, a bit of wrinkle is located on the temple. Draw nostrils of the large nose, mark the line of cheekbones and work on facial hair, which is represented by a pigtail and a long mustache. In both the hair should be drawn in the direction from the roots to the tips. 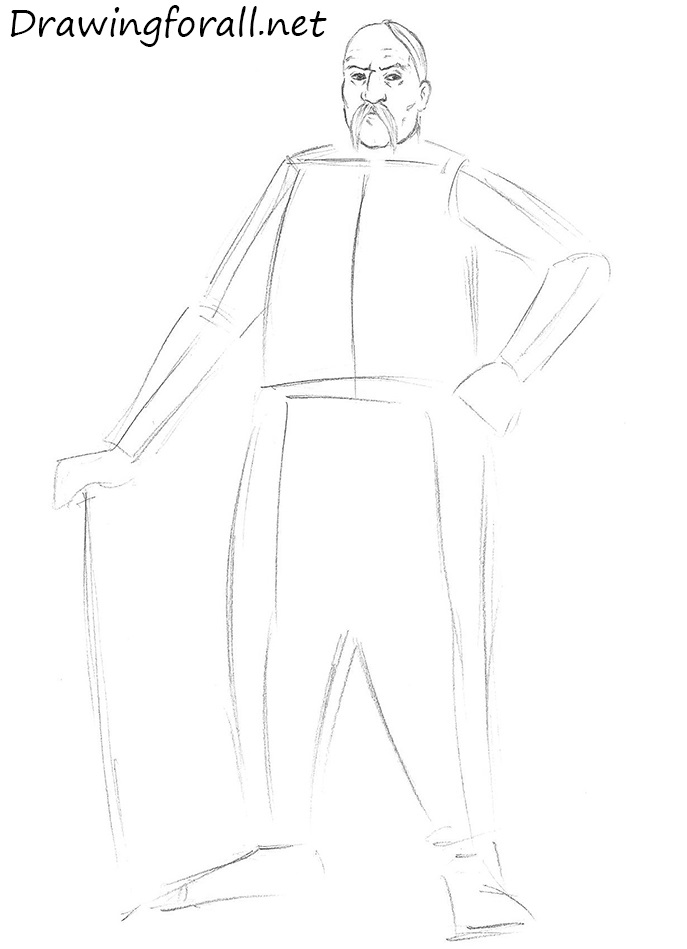 Mark the torso of the Cossack. Outline silhouettes of the fur cape on the shoulders of our Cossack, it should be in the form of two geometric shapes – rectangle to the left of us, and the triangle on the right of us. Pay attention to the shape of the figures – they are quite sloping, like falling down from the head down to the shoulders. Draw the lines of unbuttoned upper garment, as in our example. Using a few rough lines sketch out the contours of the belt and weapon with a very long barrel – exactly this kind were first guns. Yes, it’s not like the short gun of Nick Fury. 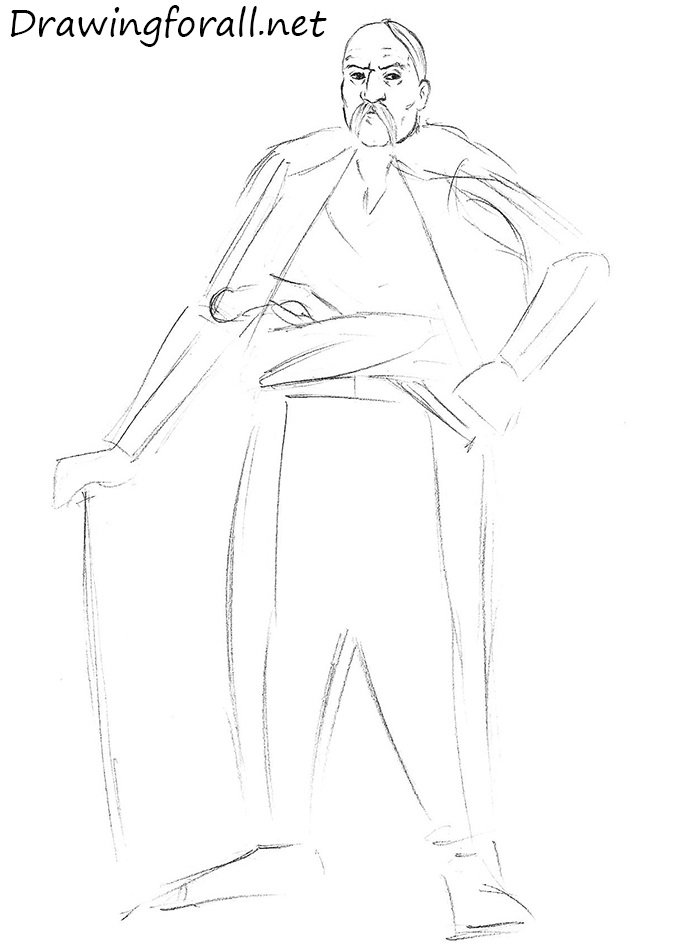 We continue our drawing lesson on how to draw a Cossack. Add details to the clothes and weapons that we have drawn in the previous step. Draw the rough, “furry” edges of the cape, as in our example. Also draw small round buttons that located in a vertical row. In the center of the body outline folds in clothes that look like some slightly curved lines. Circle the contours of the left arm of cossack, add some horizontal folds of different intensity. Also, don’t dorget to erase the guidelines. Finish this step of a portrayal of ancient weapon and roughly tied hanging belt. 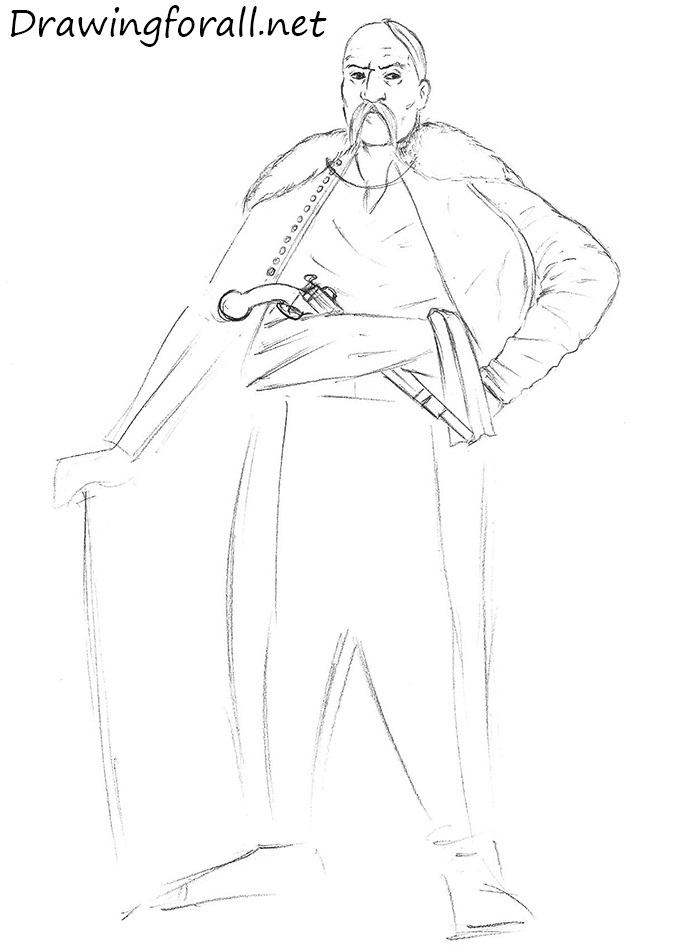 We work with the right hand of the cossack. Just as in the previous step, erase extra guidelines, draw the contour of sleeves and outline the folds. Also note, that the folds make the contours of the sleeve more uneven. We could not see the hand in the previous step – it was hidden behind his belt, and here we see the hand, it lays on a powerful staff. Draw the phalanx on all fingers and draw a nail on the thumb. 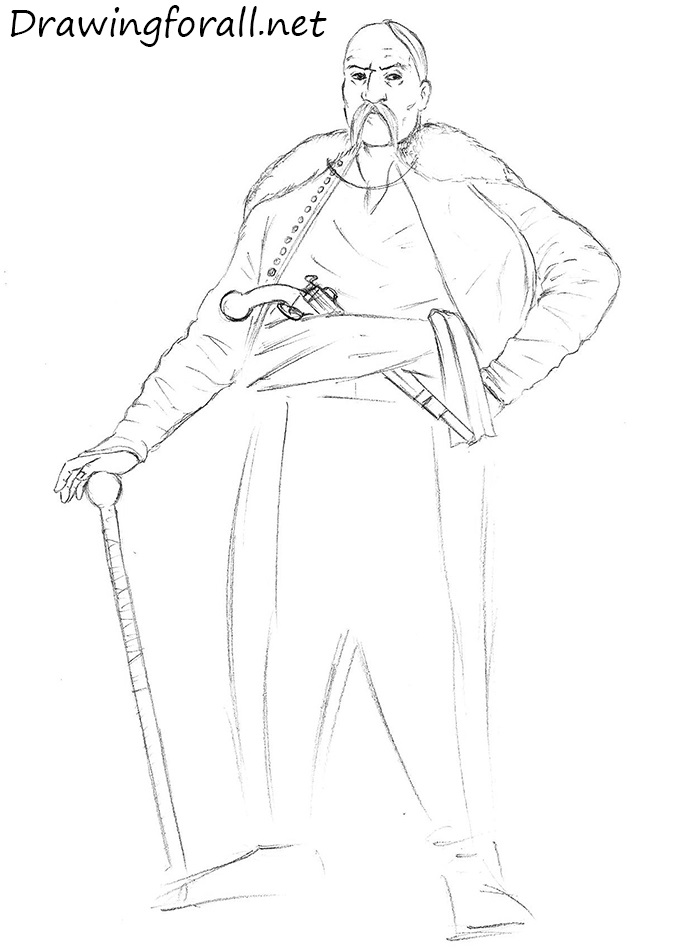 At this step we add details to the right leg of the cossack, rather, a wide traditional pants. Actually the pants are very spacious (as on one of our characters from the previous lessons – on how to draw samurai), even baggy, so no muscles and joints need not be drawn, but folds need to be drawn as it should. Immediately below the belt draw the pocket, as in our example. Add a button and some folders to this pocket. Now about trousers – draw the contours and erase the unnecessary lines. Using long vertical lines draw the folds on trousers. Drawing the visible part of the boot, mark all the folds of the leather, both internal (a few oblique lines, some of them similar to the check-mark icon) and external (they form the outer contour of the boot and make it uneven). 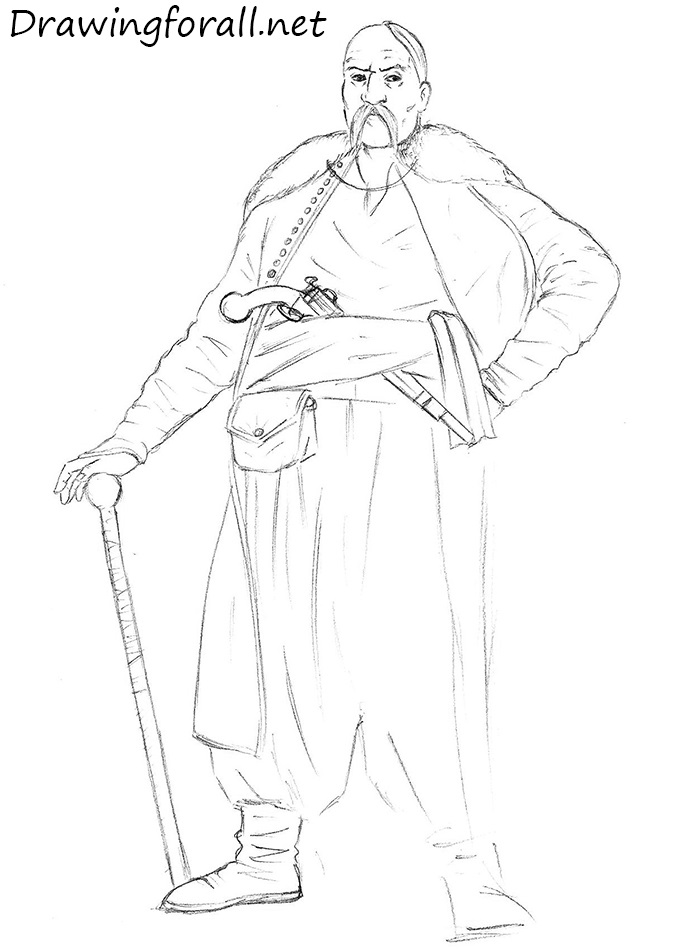 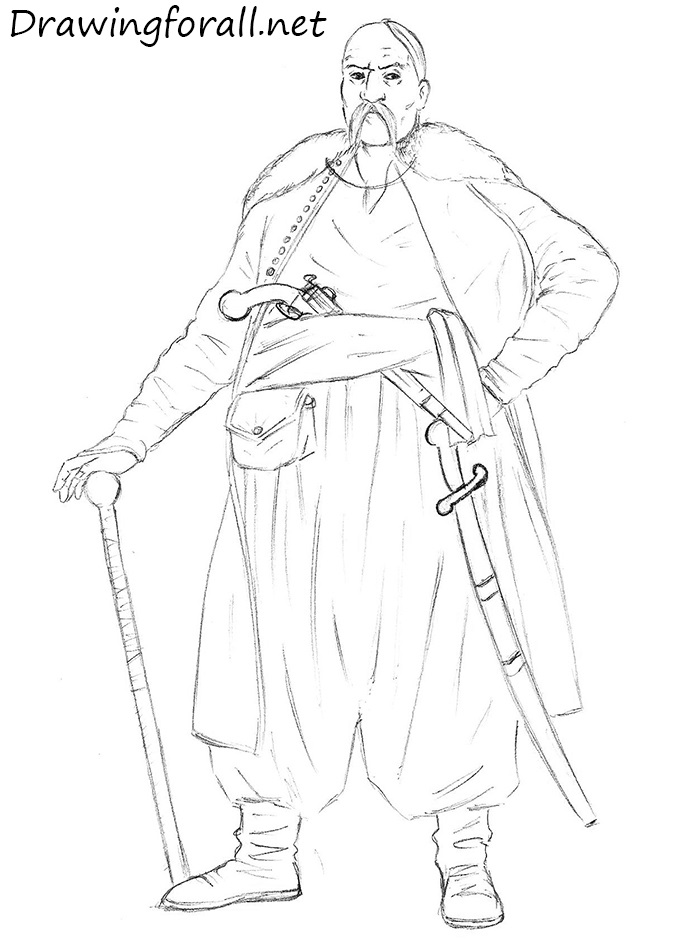 Our drawing is almost complete, it remains only to add the shadow. They are very light. In order to get shadows as in our example use light hatching. First, determine the source of light, then apply the shadows in the areas where light does not fall. In places where the shadow of a little thick, use a second layer of shading, laid crosswise.

It was drawing lesson devoted to how to draw a Cossack. Check often our website often, because we have many interesting and informative lessons.