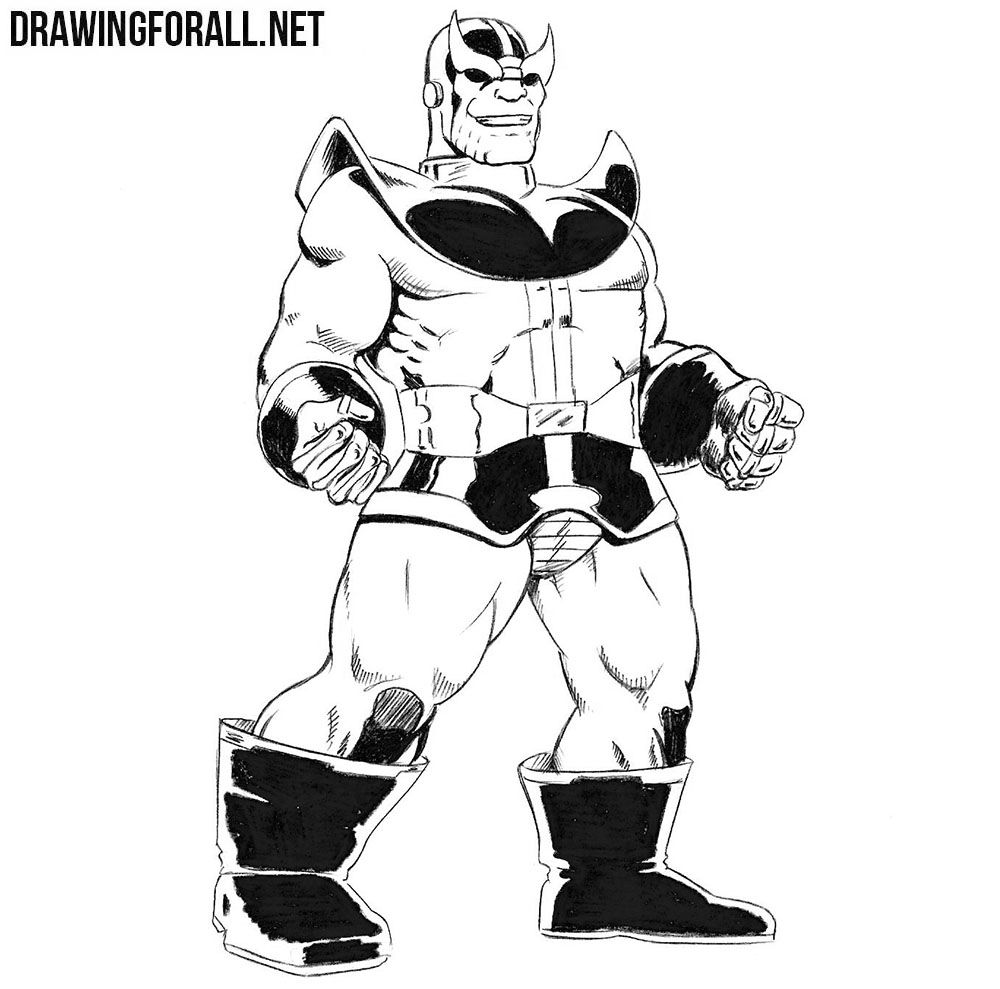 In this drawing lesson the team of Drawing For All will show you how to draw Thanos from Marvel Universe. This charismatic and powerful villain appeared not only in comics, but also in numerous games and films, and today he will appear on the pages of our website.

Thanos has a very wide and powerful body, which we will try to depict. Sketch out a head and a line of a backbone on which we sketch out a wide thorax and pelvis. With the help of simple lines, we sketch out the arms and legs. The lines on the first steps should be very light so that in the future we could erase them. 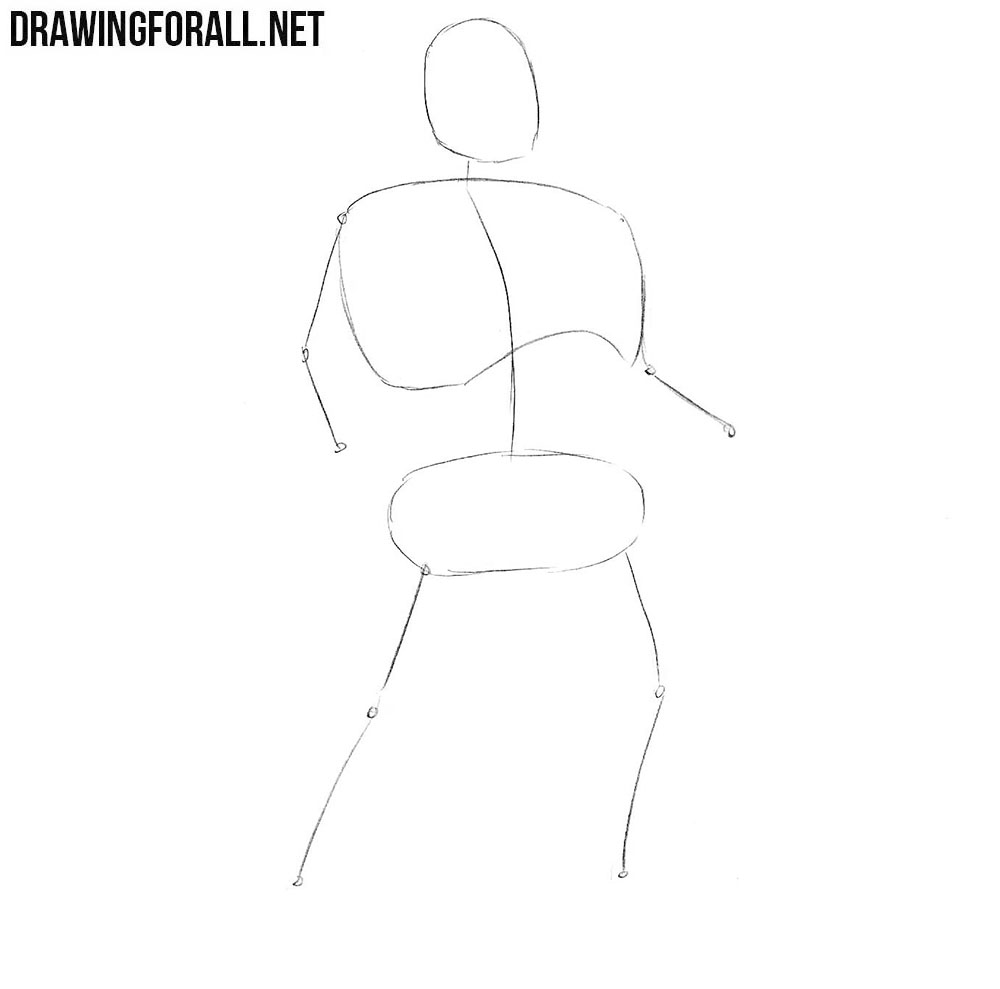 Now we will add the volume to the body. First, outline two intersecting lines on the face. Next, sketch out the neck and wide torso of Thanos. Using simple geomentric figures, sketch out the arms and legs. Recall that the body must be very wide and powerful. 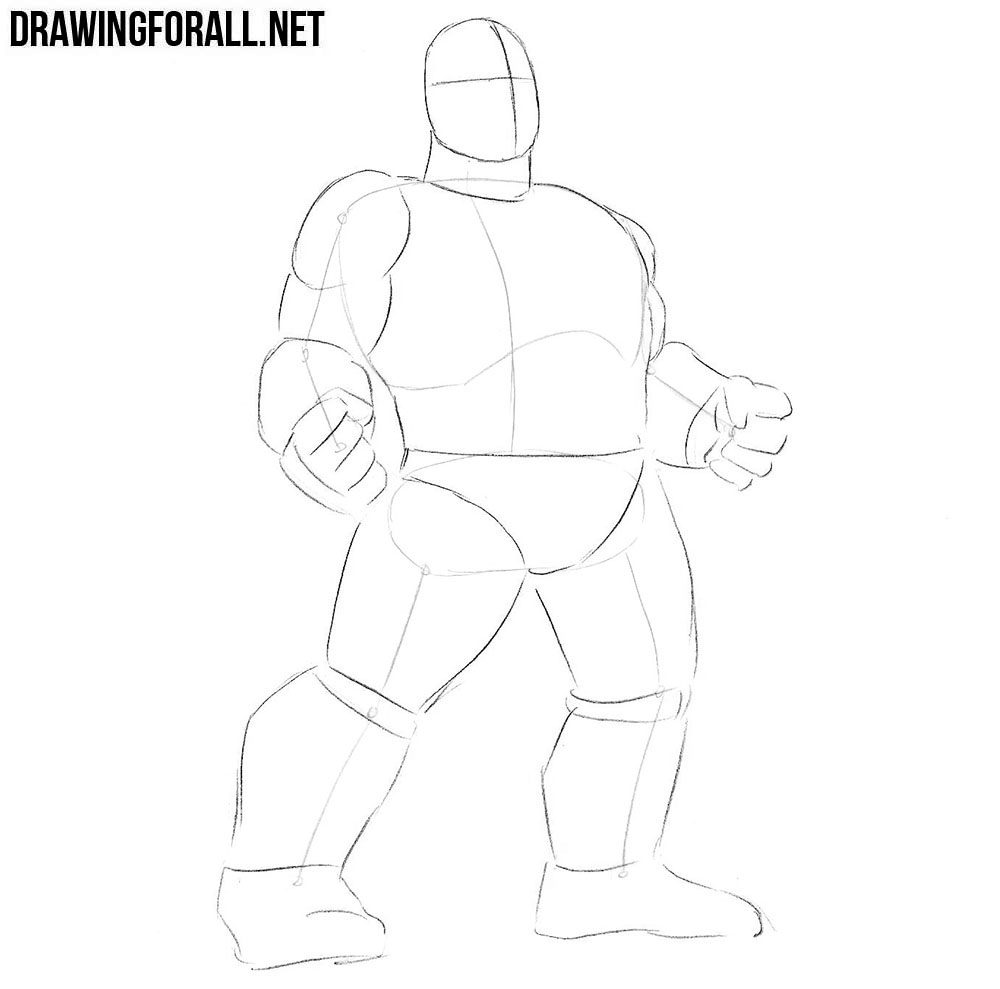 Starting with this step, we will begin to draw the details. First of all, draw sinister eyes with frowning eyebrows. Next, draw a short and wide nose. Below we draw the mouth stretched out in an ominous smile. Use the intersecting lines from the previous step to draw the details of the face. 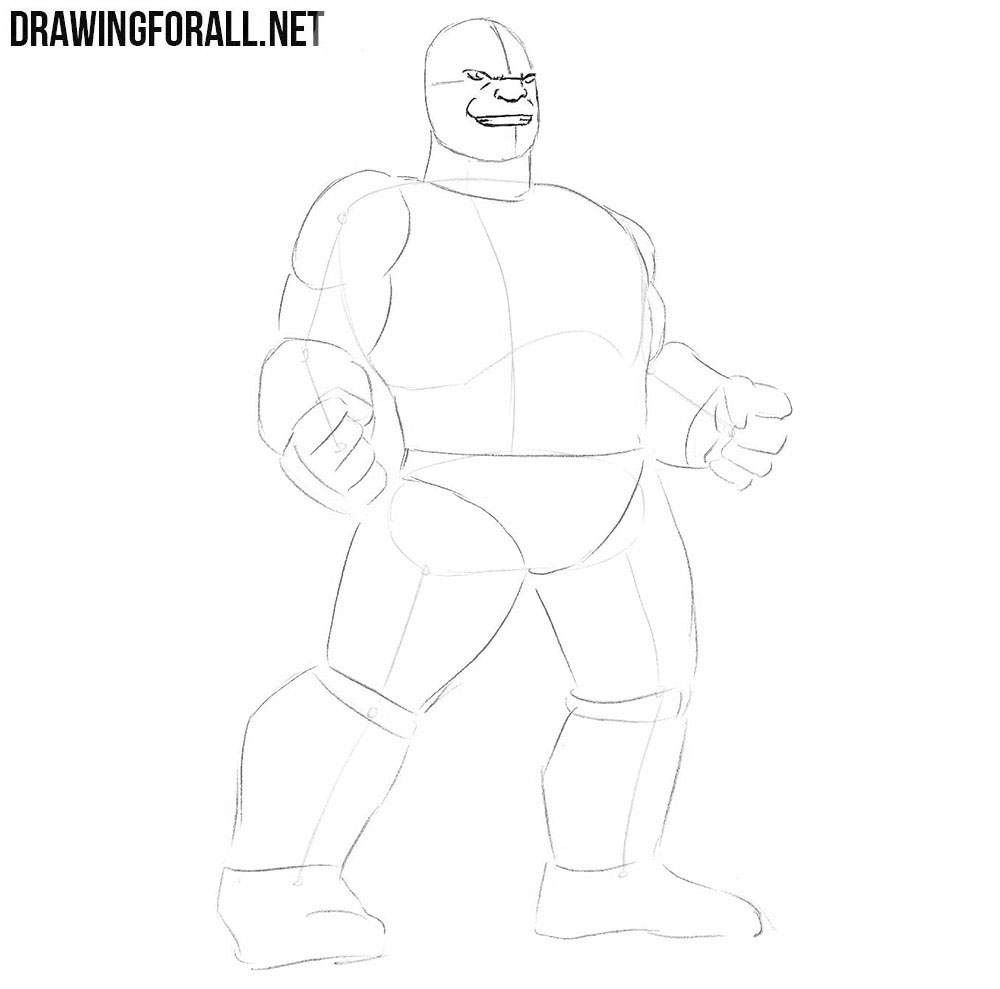 Continue to draw details on the head of Thanos. Draw out the shape of the cheekbones and wide chin. Draw out the characteristic vertical lines on the chin. Next, carefully draw out the outlines of the details of the costume on the head, as in our example. 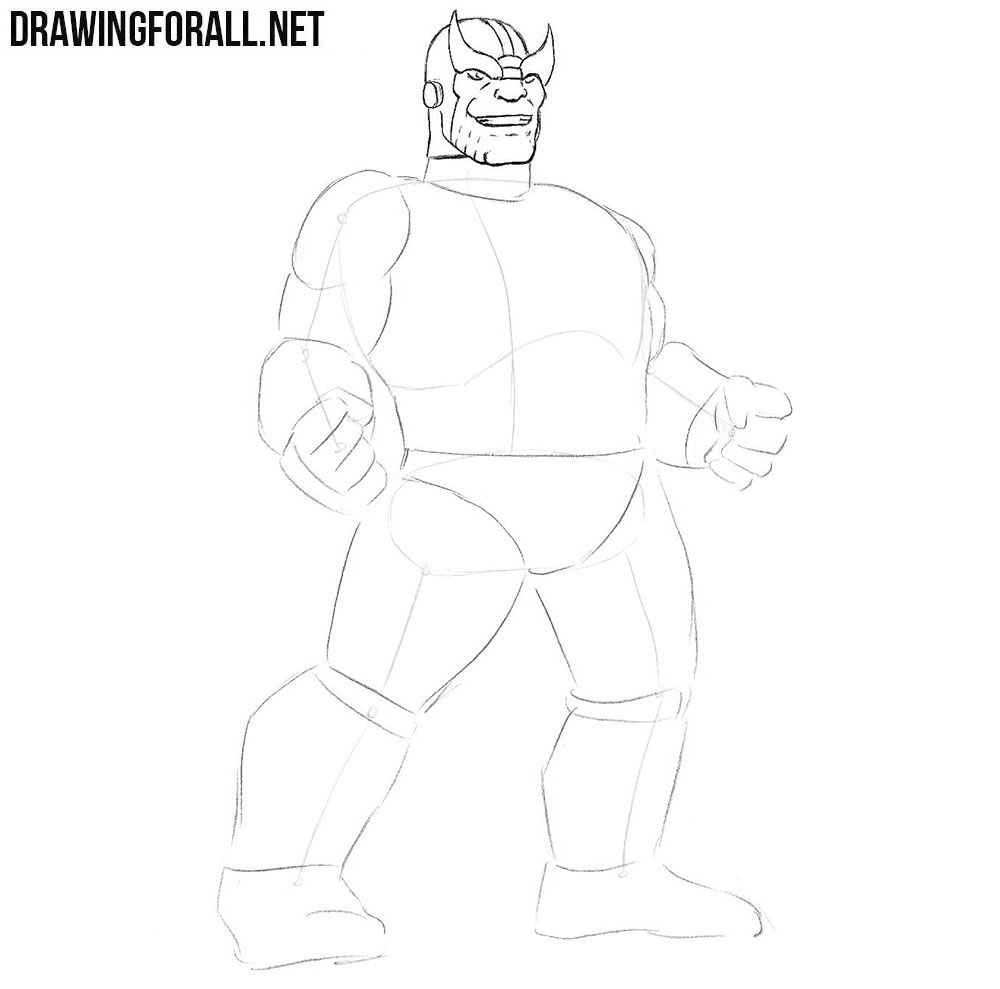 Perhaps the simplest step of the lesson about how to draw Thanos. Here we draw out the outlines of the collar and costume element that covers the shoulders of our charismatic villain. 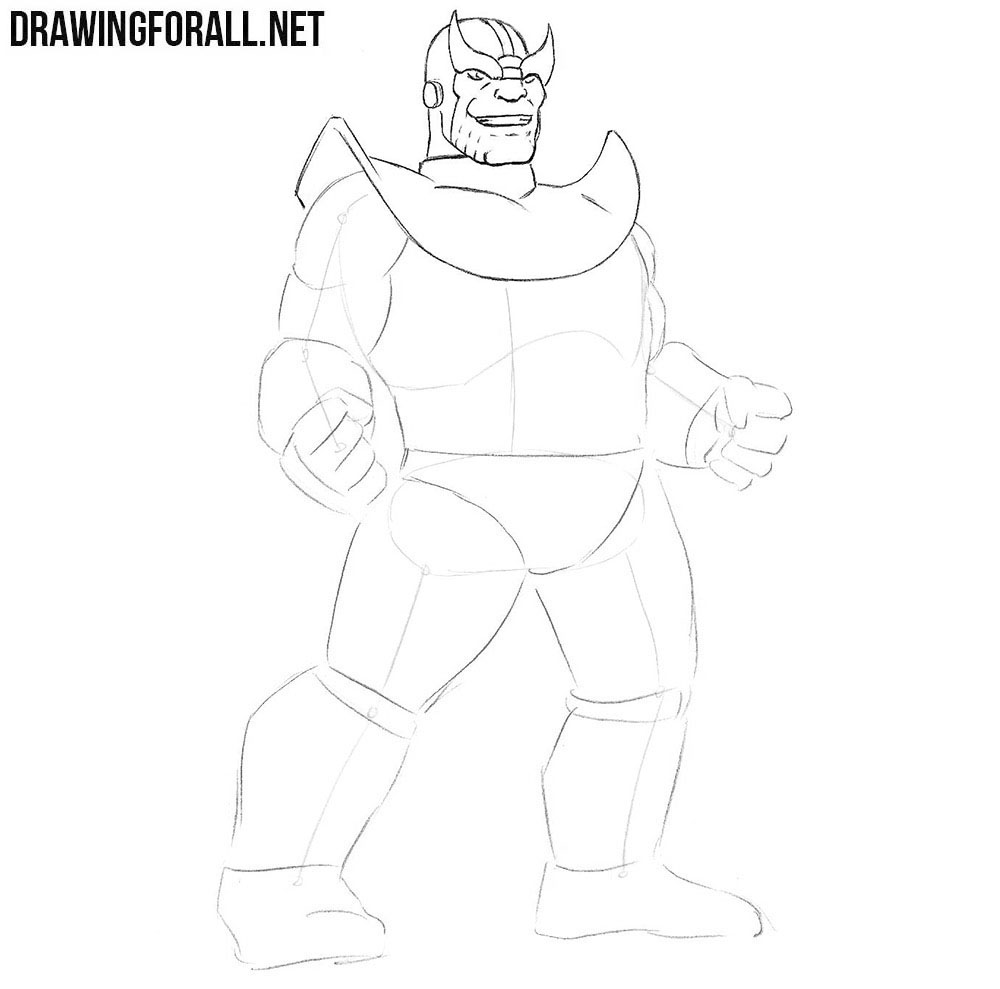 Let’s move a little lower and draw the torso of Thanos. Here we draw out the wide pectoral muscles, outlines of the torso and the lines of the abdominal. Here we also need to draw the upper edge of the belt and the vertical line on the chest. 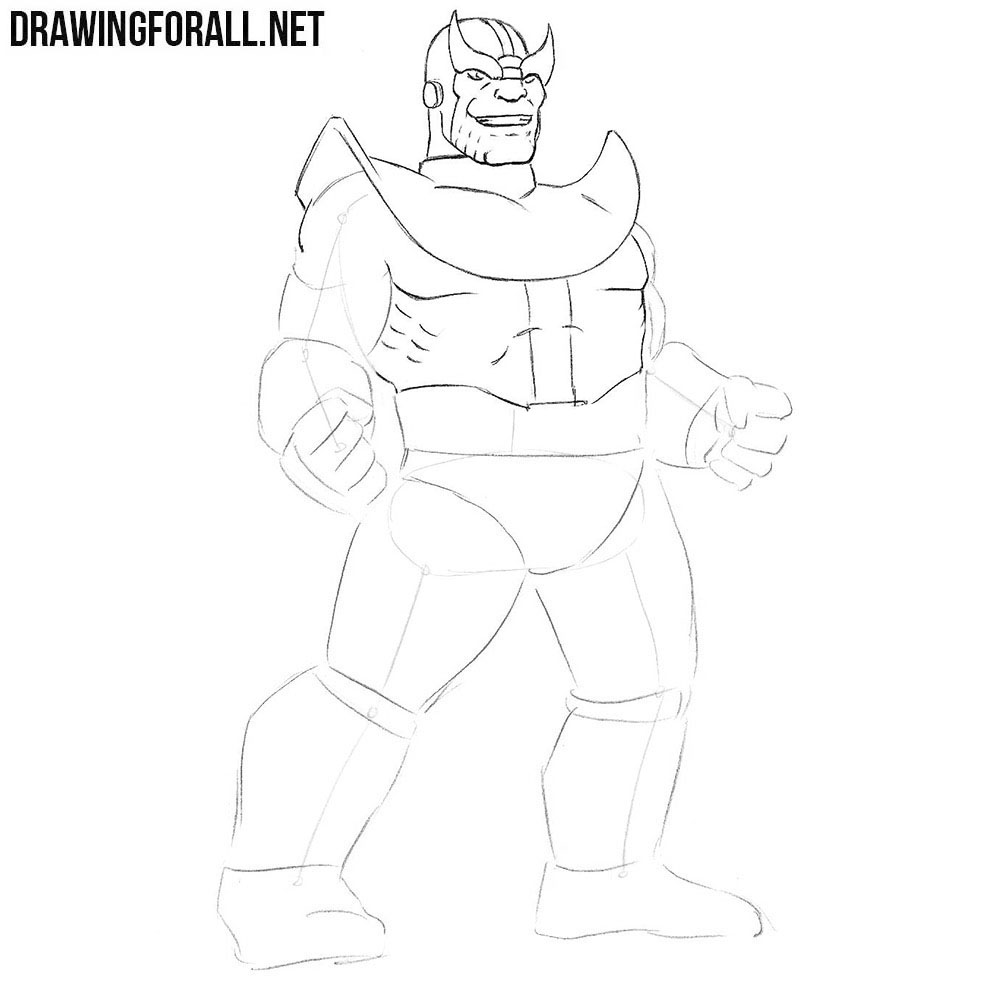 This step will be quite complex, as it will have many lines and details. Draw large rounded outlines of deltoid muscles. Next draw out the biceps and the visible parts of the triceps. Carefully draw gloves and huge fists of Thanos. Try to repeat all the details on the fists as shown in the example below. 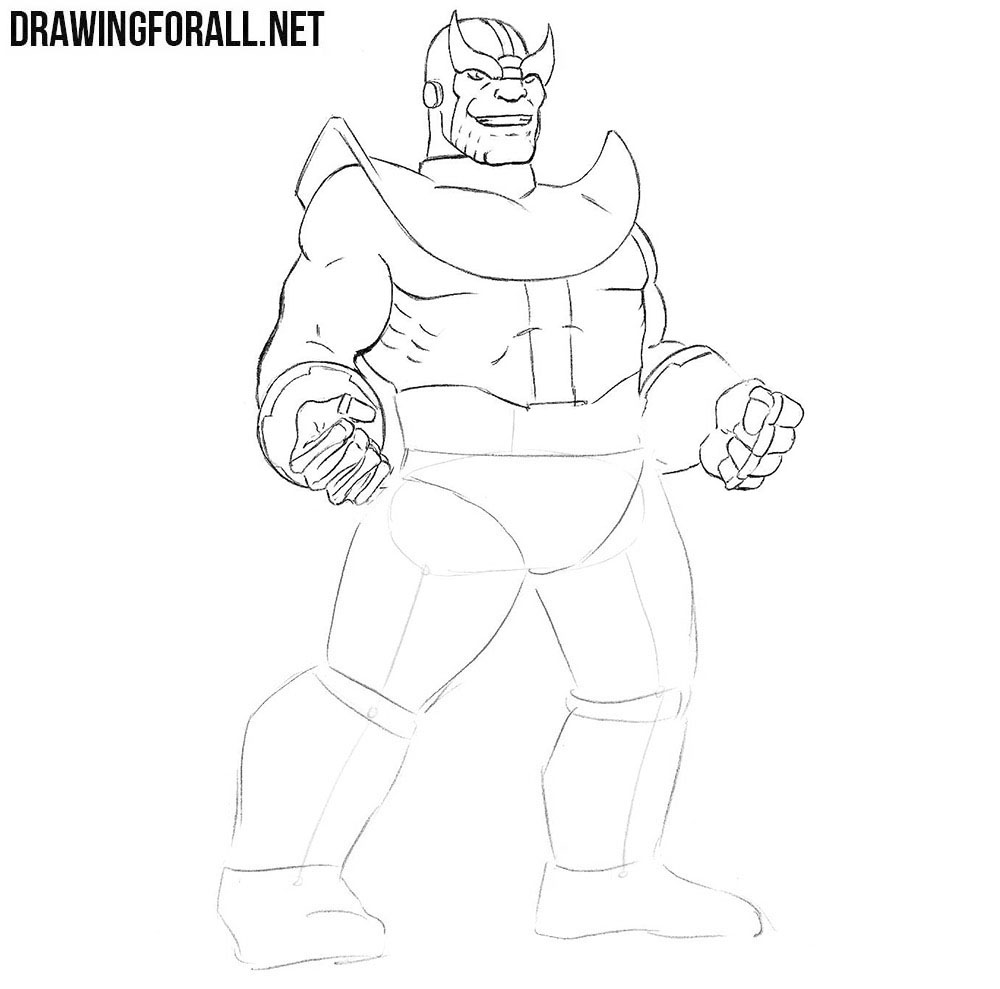 We continue to draw Thanos. This step will also be very simple, and in it we will draw the lower part of the torso. Draw the remaining outlines of the belt and the part of the costume that covers pelvis area. 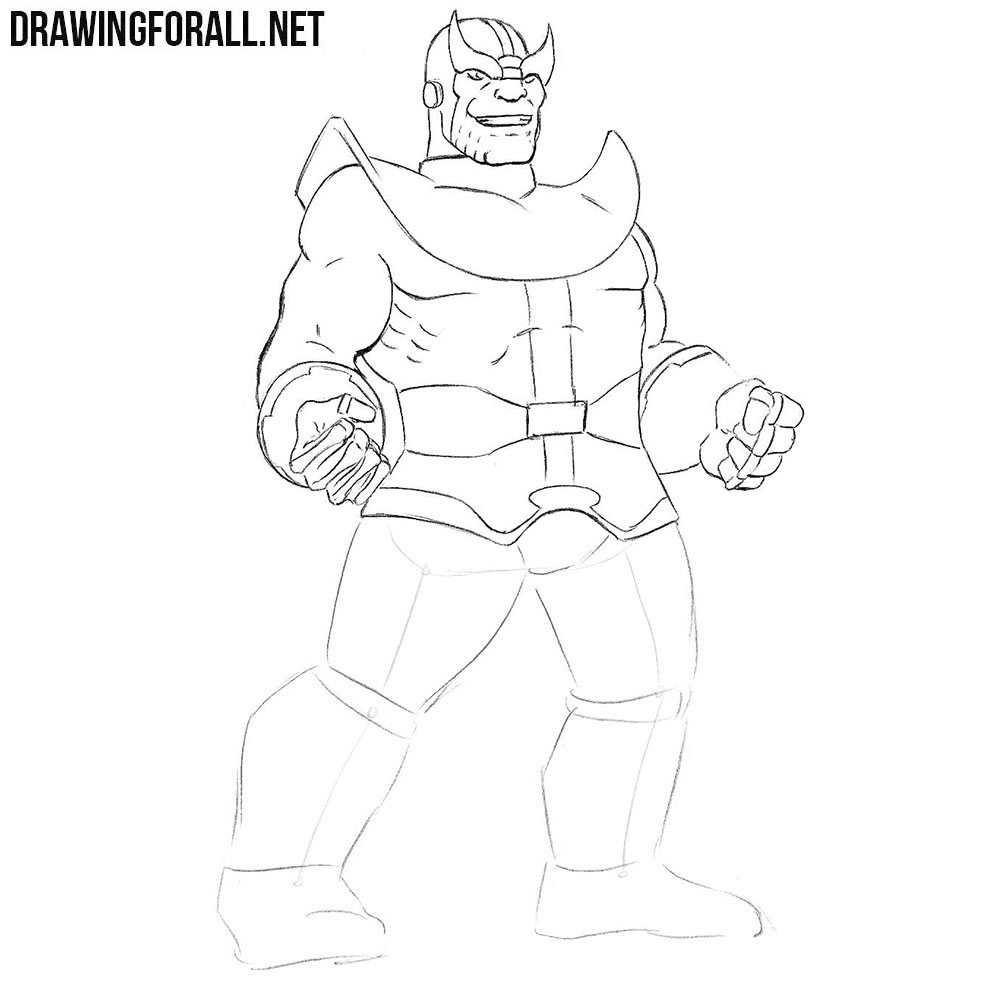 Now we pass to the legs of Thanos. Here we need to draw out the outlines of numerous powerful muscles on the legs and powerful knee joints. It is very important not to get confused in the position of the muscle lines on the legs. 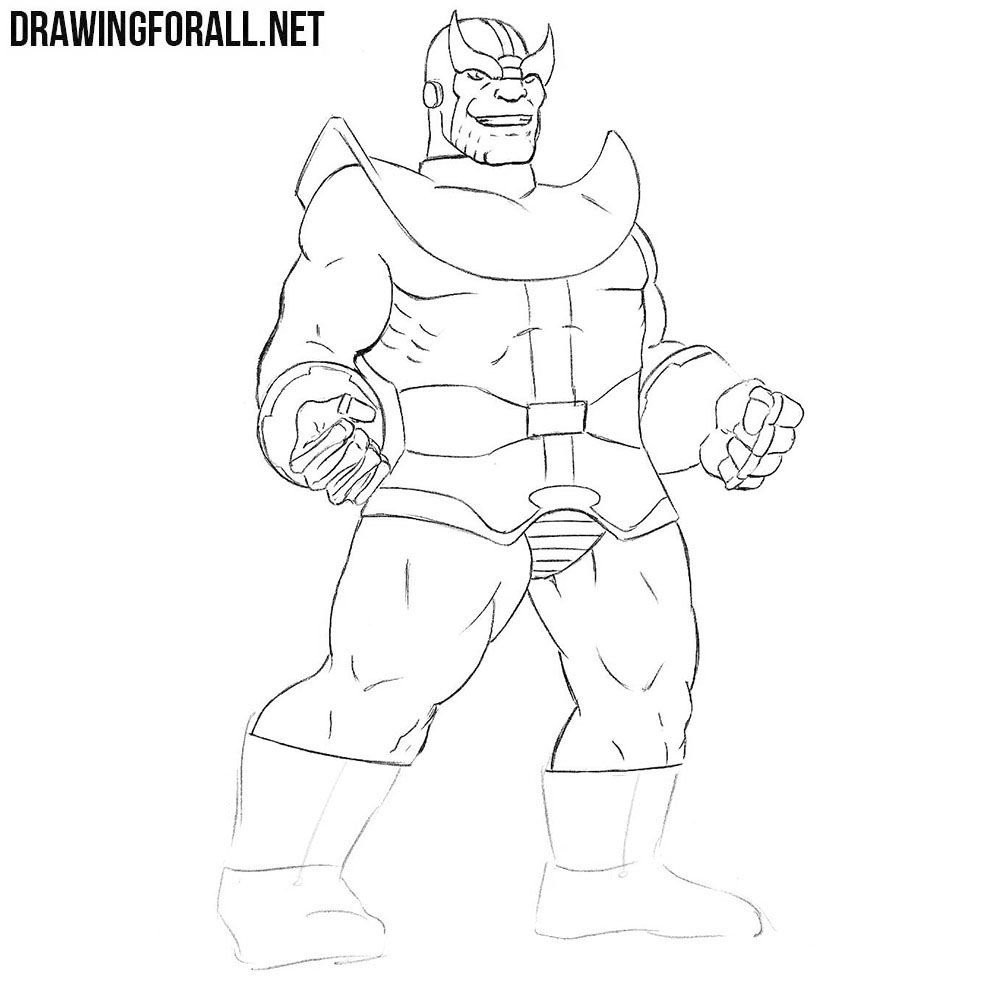 Now we move lower and draw huge boots. They should be very wide at the top. On the boots do not forget to draw the necessary folds. Also do not forget to erase all remaining guidelines from the Thanos drawing. 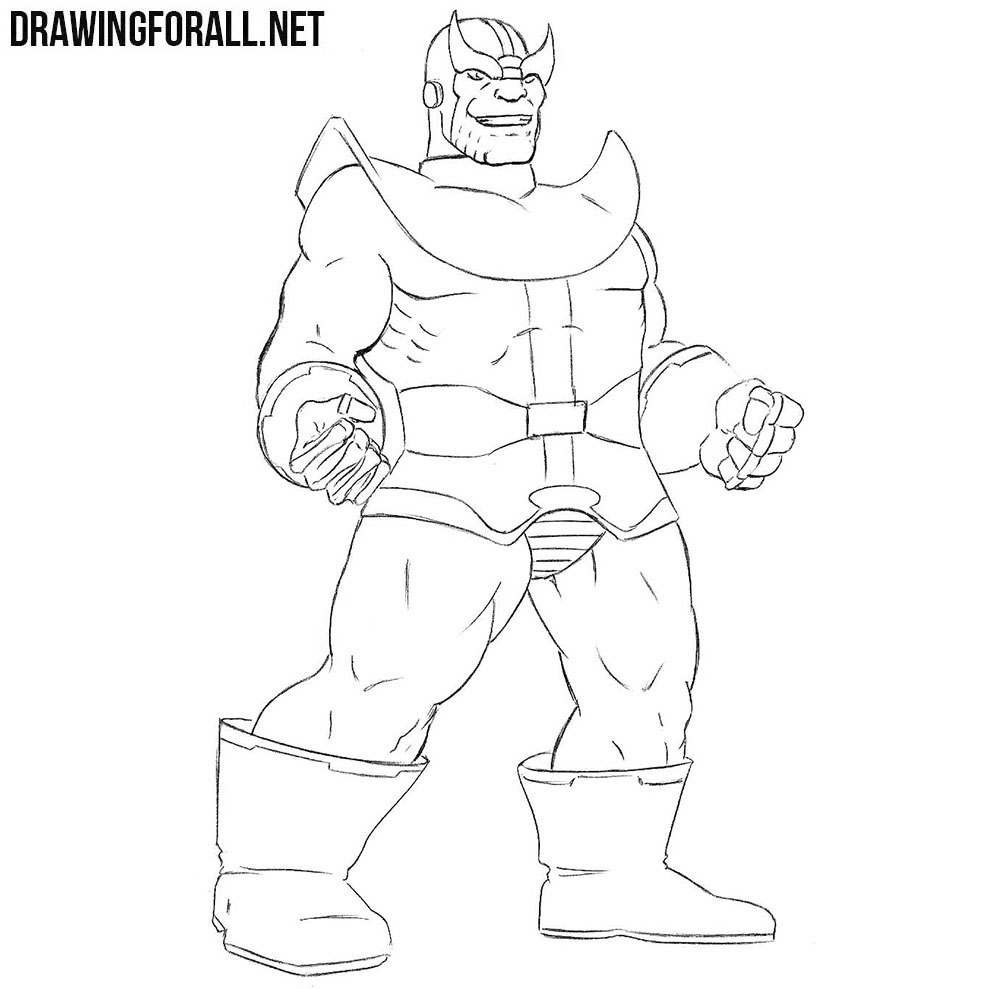 Thanos drawing is almost done, and we need only add the last details, namely the shadows. First, we draw out the outlines of the shadows, then paint them in contrast black. In order to draw lighter shadows, use dense and contrast hatching. This is how classic comic shadows are drawn.

Thanos appeared a long time ago, and to this day is one of the most interesting and famous super-villains of the Marvel Universe. Recall that on our site there are drawing lessons about all the popular supervillains and superheroes of Marvel and DC, so go to the category “Comics” and learn how to draw as a real comic book artist. Also, subscribe to us in social networks to be aware of updates on our website.