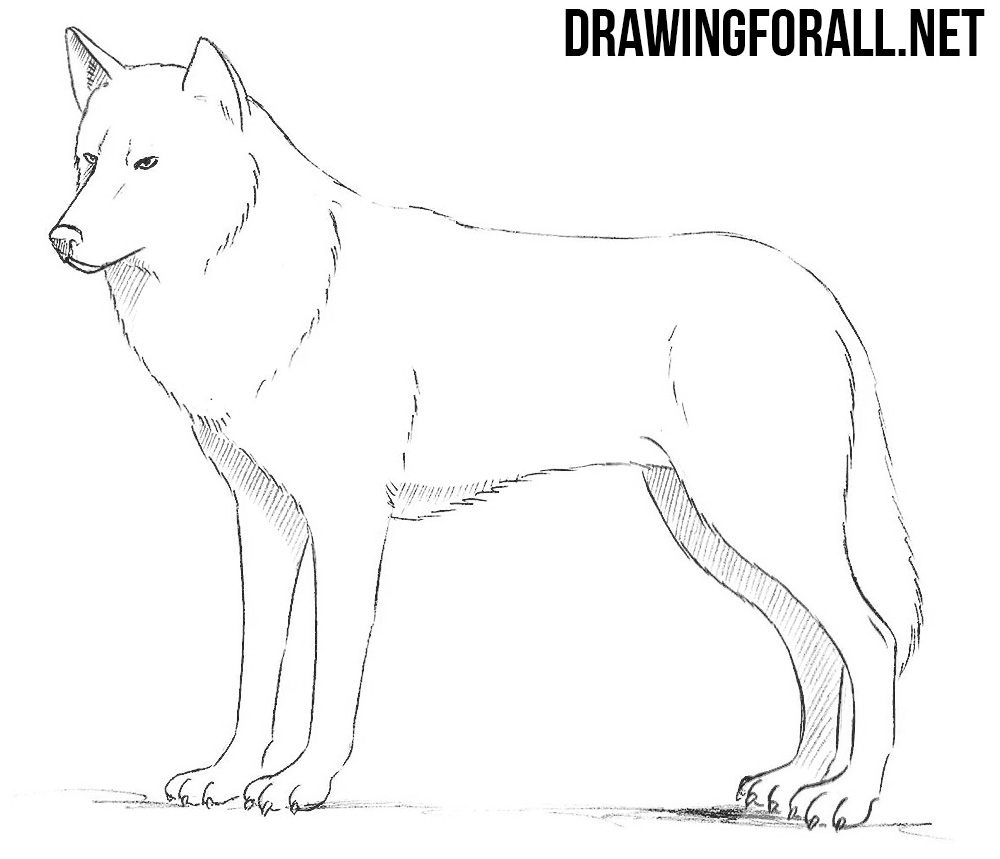 Hello dear artists and welcome to the drawing lesson about how to draw a wolf step by step with a pencil. We will try to make this lesson as easy and Intuitive for you as possible, so let’s get started!

We draw people very often, and we always start drawing them with a skeleton. The skeleton of a wolf is quite similar to a human skeleton, the main difference is that the wolf’s skeleton is in the horizontal plane. So, first of all draw the head in the form of a circle and muzzle in the form of a cylinder. Next, outline the neck, which goes into the spine and then into the tail. Then sketch out the chest and pelvis with circles. At the end of the step sketch out the limbs. 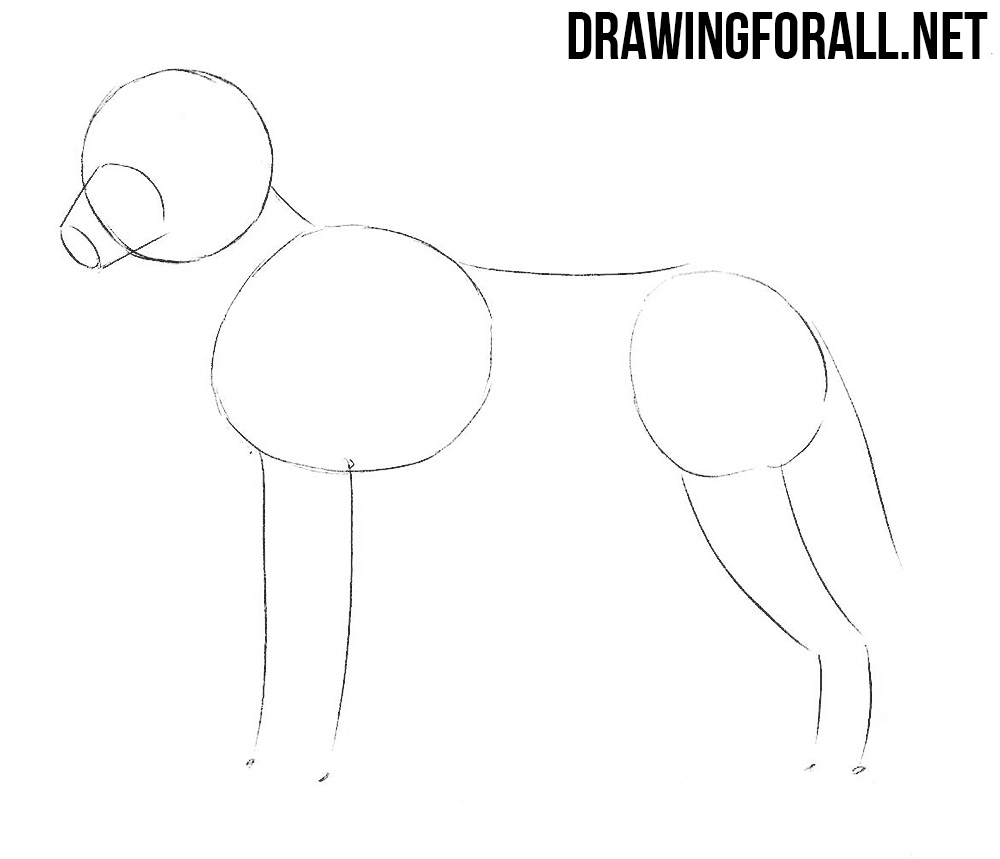 Let’s add volume to the figure of our wolf. First of all we sketch out the triangular ears in the upper part of the head. Next, draw the neck in the form of an expanding cylinder. After that, we outline the torso which slightly narrows in the center. At the end of this step add volume to the paws and move to the next step. 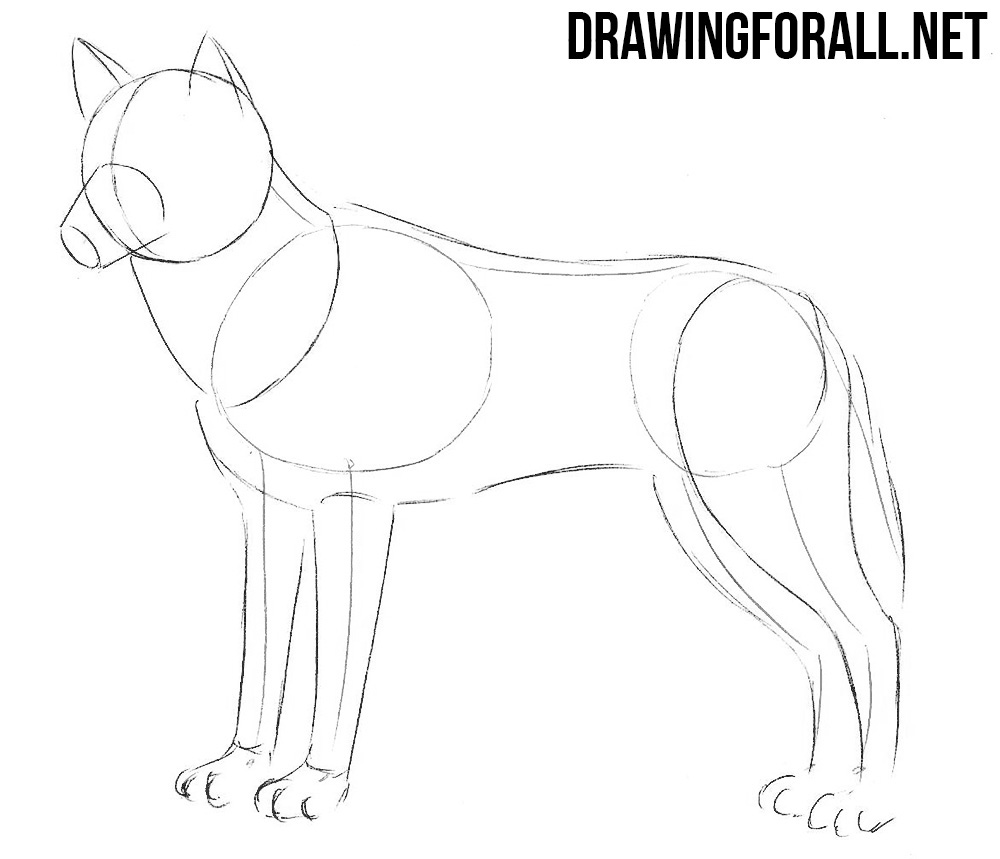 Let’s start adding details using clear and dark lines. Carefully draw out the muzzle, nose and mouth of our wolf. Next, draw the eyes of our wolf and add a couple of wrinkles around the eyes as in our example. 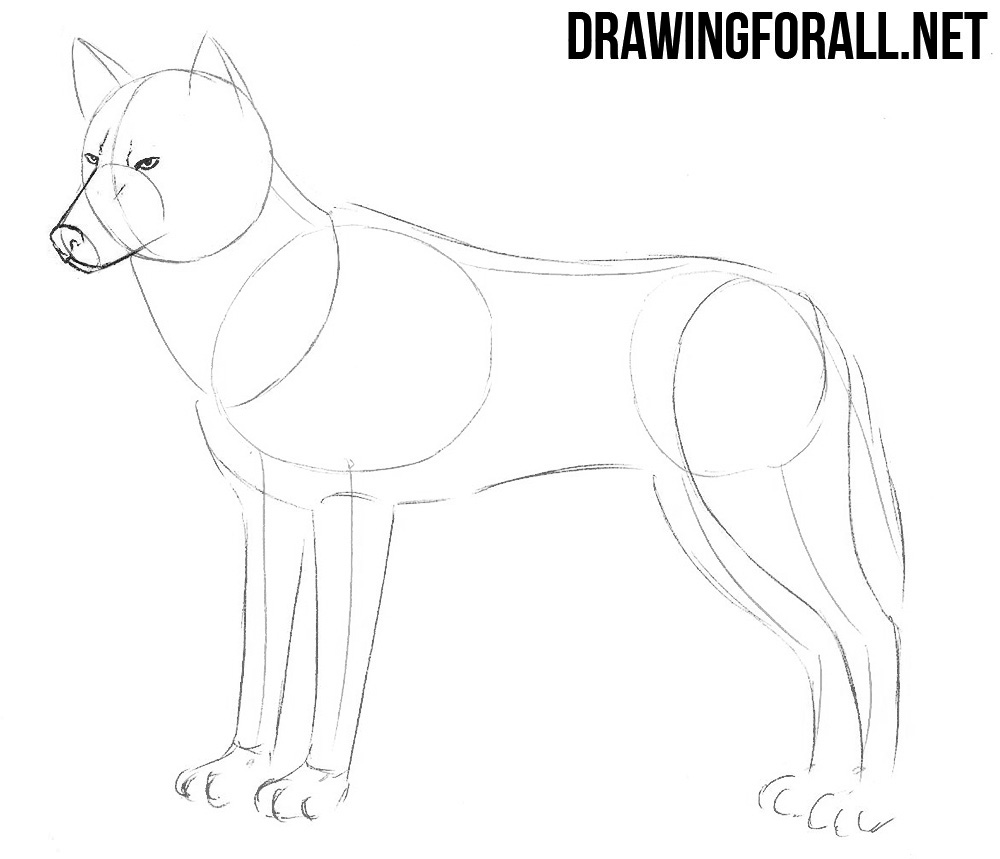 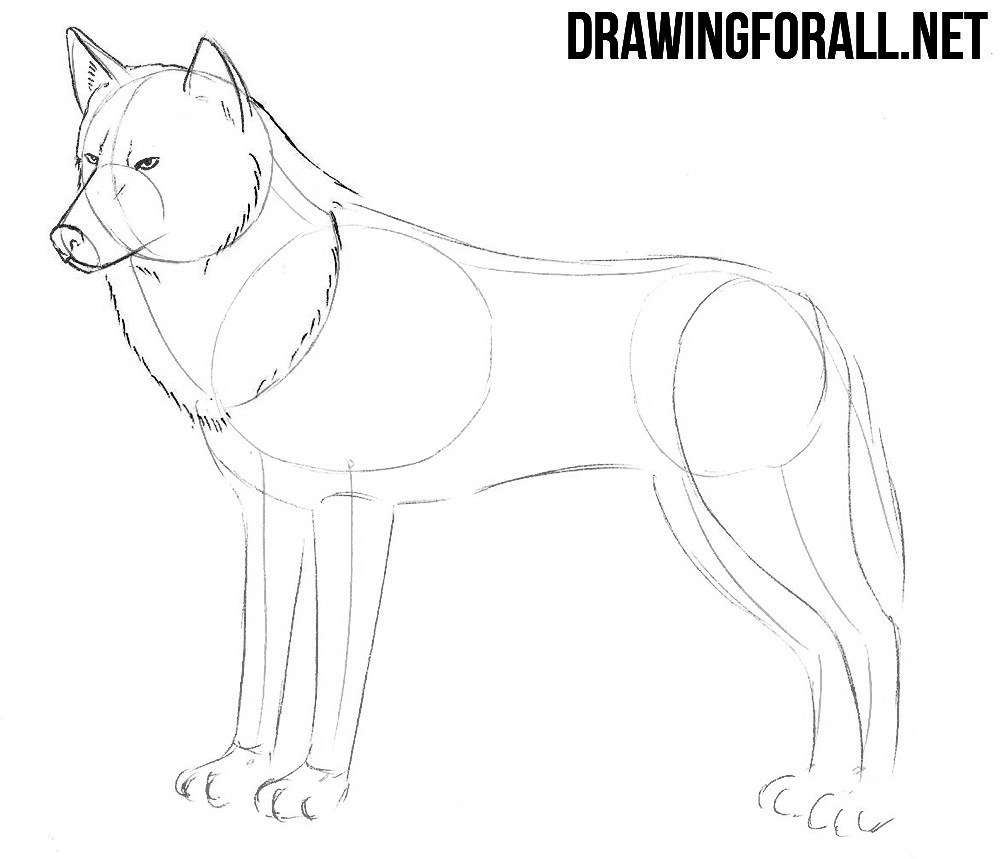 Continue the drawing lesson about how to draw a wolf. Here we need to continue the neck line to draw the front limbs. Pay attention that the lines on the limbs are more straight than on the neck, since there the fur is not so voluminous on the limbs. At the end of this step we carefully draw out paws with rounded toes. 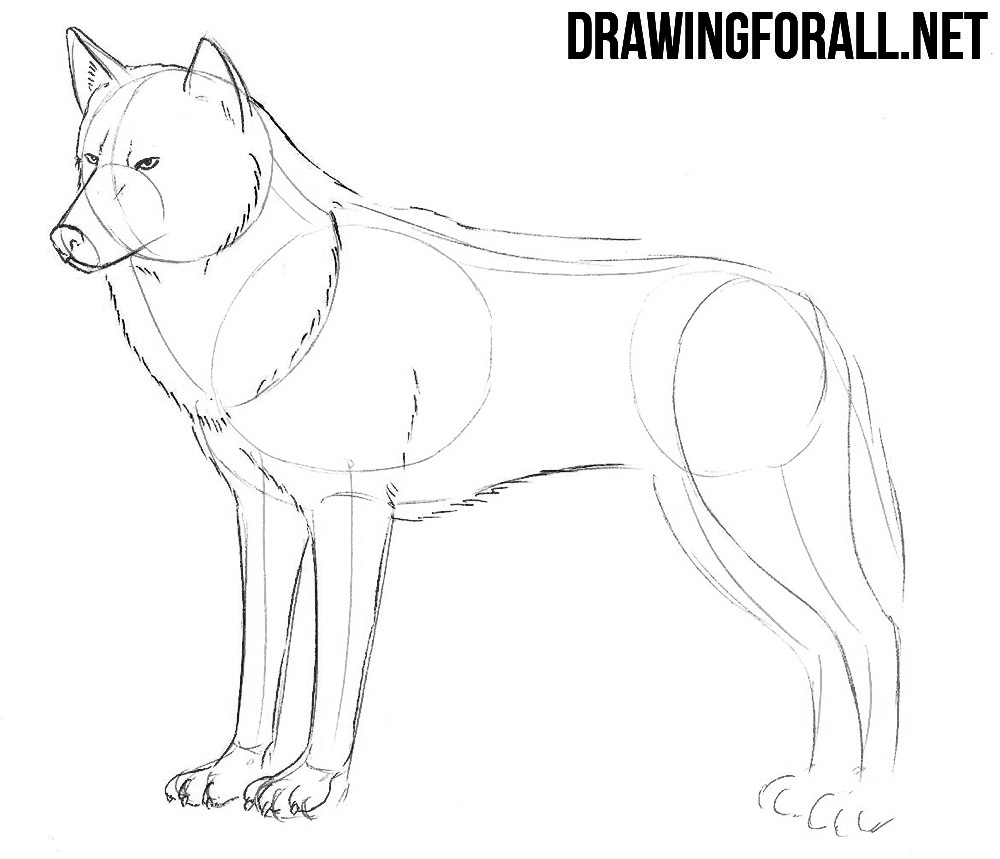 Here we do everything about the same as we did in the previous step. At first continue the line of the back that goes into a fairly fluffy tail. Next draw the hind legs following the example of the front limbs. 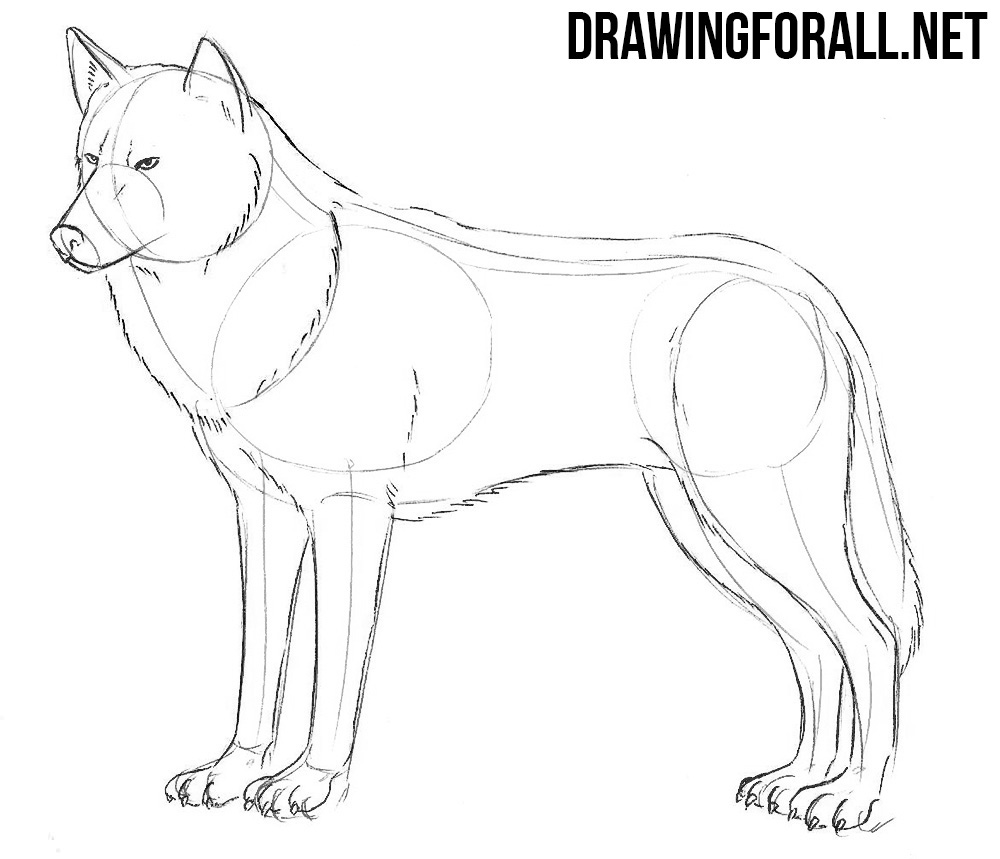 Erase all the unnecessary and additional lines that we drew in the front two steps, since they are no longer needed. Circle the drawing where necessary to make our wolf clear and smooth. You can also add a bit of texture to the fur using short strokes. 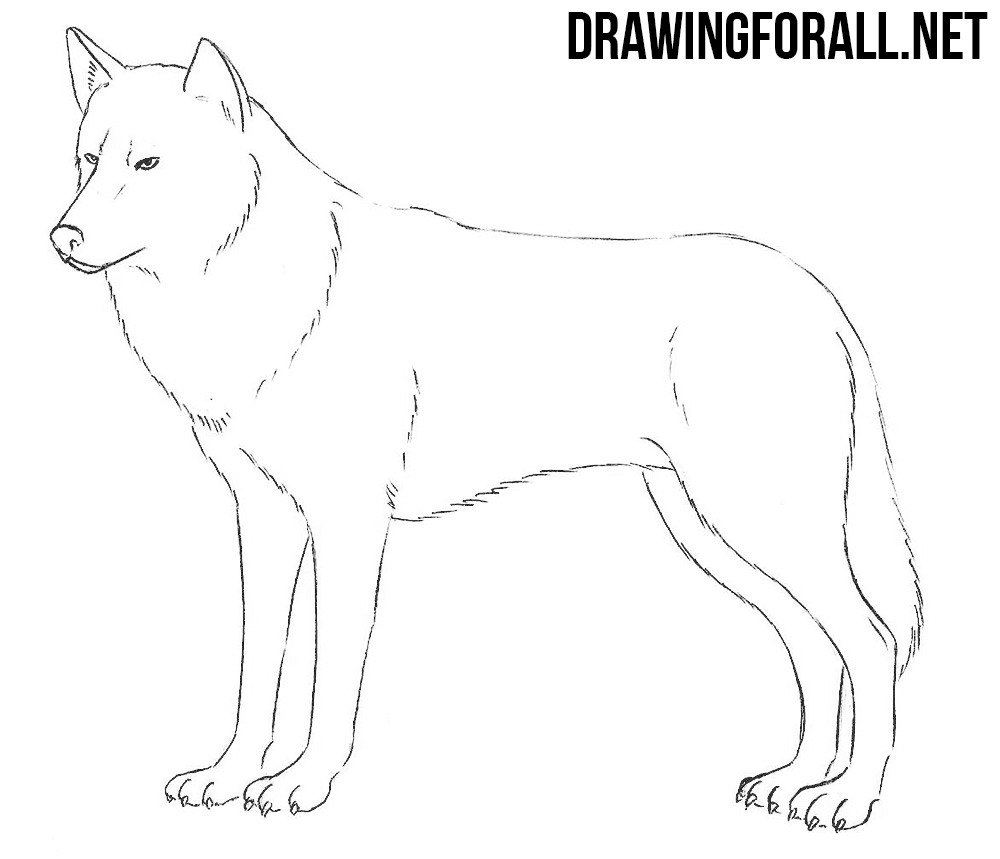 So, we almost finished the lesson about how to draw a wolf. Here we need to add some shadows to make the drawing more realistic and voluminous. You can add shadows using hatching as shown in our example, or make dark and contrast shadows, as in comics (as in our Spider-Man drawing lesson, for example).

If you followed our steps, then in the end you should get such a realistic wolf. Using the tips from this drawing lesson you can draw a wolf in any pose, so practice it, draw more often and improve your skills.